Pardon me while we take a break from the regularly scheduled bloghop for my lesson run down and note review so I can remember what to work on!

My riding lesson was today and there's not much media of it, just selfies while I wallowed in self pity because the weather was slightly nasty. 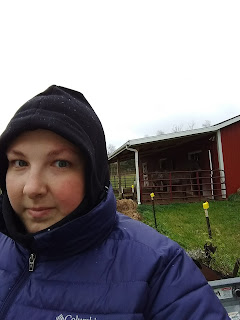 This is my "I am not impressed, weather" face 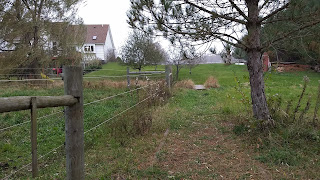 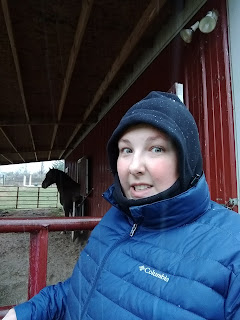 Okay, but seriously that's it. I should have set up the camera to record it all but didn't think about it. I was more concerned with dressing warmly.

But seriously, I was warm enough I didn't need gloves.  The balaclava was perfect. I pulled it down off my head when I put my helmet on, but it kept my neck and ears protected from the wind. I'm a fan!

I think this is my new default for winter riding, barring the shoes, the wind goes right through em. I still need to work on gloves, but this is an amazing start.

It was rainsnowing when I left the house and I grumbled my way across to the barn. Gwyn saw me grab the halter and threw me the middle hoof and left. She knew. She knew. But it didn't take long for her to be amenable to capture (like a minute... haha) I curried the mud off, brushed where she was dry and started dolling her up. I wasn't sure what I'd be doing so I stuck polos on her front legs, partly because I was cold and partly because purple.

Trainer AML arrived as I started to get the saddle. I signed her liability release and we got to know each other. She watched me tack Gwyn up and was pretty much getting the feel for Gwyn's personality and how we worked together.

I hopped on and started warming up. I talked about what my goals were (eventually eventing, but for now solidifying the basics) and what issues I knew we had (dropping the shoulder, bending, feeling very dead to left leg, working on the bit).

Right away we started to tackle the shoulder/bending/working on the bit/straightness stuff.


Basically, I want Gwyn to have self carriage, and that can be taught. I want Gwyn to know that when pressure is released, we relax. To that end, she's having me do some weird stuff to get the feel and overexaggerate the movement.  We started with just the concept of giving to pressure. She had me hold my hands out, palms down and WAY up high and immediately release when Gwyn dropped her head and took a step back. This became the foundation for back up. And by the end me just sitting up and raising my hands was all it took for Gwyn to step. But she's wiggly.

So then we worked on me feeling the connection between the rein and her hind leg. So my right rein should be cuing her right hind leg to step in and under herself. There's a certain swoop feeling when she truly steps in and across, versus sidestepping. The goal there was cue with the rein until I feel the swoop. Then get more and more together.

Again, and I've heard this from so MANY sources, control the feet, control the horse. So there were some deer moving through the woods during the lesson and Trainer AML got to see some of Gwyn's spook scooting and we used those same basic principles to get her focused and get her back and straight and listening to me as the herd leader. I have a habit of pushing or pulling Gwyn where I want her to be, and that just sets me up in a battle of wills with a part appy mare.

Then we did the 90 degree exercise. Basically instead of doing circles, I make very geometric movements around the arena and steer like I have a steering wheel. This is all to give me the feel and I have the suspicion that this will eventually be very subtle but I have to retrain old habits.

Let me tell you, doing this exercise, picking random 90 degree turns to take, all of a sudden I felt Gwyn start to carry herself, she was in a rough frame and we were straight in the contact before and after turns. She wasn't falling in or bulging out. I swear it was like magic and the horse and rider I knew we could be was starting to emerge.

A lot of the stepping under exercises I can do on the ground as well as in the saddle, so this gives me a lot to work on and practice until my next lesson (scheduled for december!)

All in all, I really liked the lady. She was tough but praised when you got it right. Just what I like.

Amusing Anecdote: Saffron was NOT happy about the new lady and tried to run her down. Trainer AML just used her equid knowledge and sent Saffron off. I have never seen the donkey like that, but I think it's because Saffron knows where she is herdwise with us, and she was trying to suss out the new person, who firmly said "Nope, I'm also higher than you"   Saffron sulked in a corner of the arena for the rest of the lesson. LOL Then, by the end, came over to play nice.