Gwyn will be spending April working twice a week with a trainer at Shadows. That should keep her occupied and busy so she doesn't just get flabby. The shipper is tentatively scheduled for April 19th for pick up. I'm trying not to think about it. I used the same company that brought her from Florida to Washington because I had a good experience and I liked the price.

The barn she'll be going to is Hummingbird for sure. It feels like the right decision.

I scheduled Toby Ewing out for a vet visit on Thursday to get everything squared away for her travel. So he'll be at Shadow's tomorrow and once I have a more permanent date set they'll fill out the health certificate.

I'll have Gwyn with me before her birthday in May. YAY.

Now this stupid weather just needs to improve. I miss flowers and green prettiness. I'm going stir crazy with nothing to do.
Posted by Amy M at 10:58 AM No comments:

Hummingbird Equestrian and Training for Gwyn

I had gone for a drive past Blue Ribbon on Monday because it was supposed to be up in the 50s. None of the horses were turned out. I had an immediate sinking feeling. On my drive back to the house I saw a sign for a boarding barn that I didn't remember before (despite it being on a fairly major road). I called and on Tuesday the owner returned my call and we set up a time for me to come out Wednesday morning.

It turns out, I remember the facility from December because it still had a For Sale sign! It looked nice and I bemoaned the fact that it was no longer on the market to Eric. It had already sold by then and they only got the sign at the end of January, so my confusion at not remembering the place totally makes sense now!!

Anyway, this was a GREAT facility. The owner was nice and down to earth. It's not huge, that big building is both stalls and an indoor arena. I'll describe more of the visit with each picture. 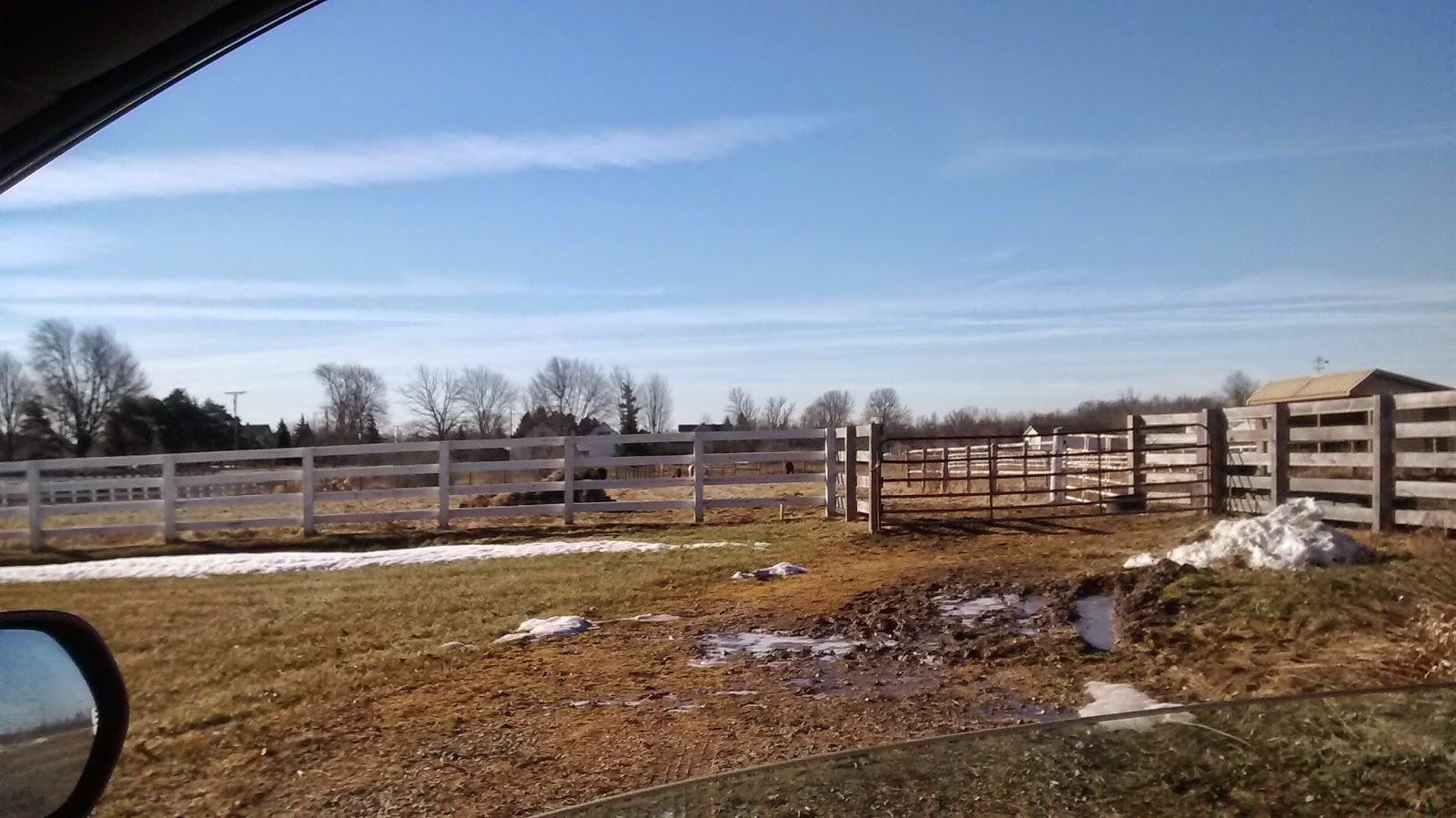 This has become my newest top contender. It sounds like the age group is older lady and the owner is there as her main job doing the work too. That always bodes well in my mind. I could definitely be happy there for a couple months while we house hunt and get our own property ready.


In other news, I contacted Beth back at Shadows to see if she could fit a couple training rides on Gwyn in a few times a week. So now Gwyn will be ridden by a trainer 2x a week until she moves. Hurray! Beth also said she'd be present for the pick up day when Gwyn gets loaded into the trailer to come to Michigan. Knowing someone is there who can read my horse and report back how it went makes me feel SO much better about this whole thing.

Now it's time to decide on a barn, set up shipping and schedule the vet to come out to get the health certificate and make sure Gwyn is caught up on everything so she can travel!
Posted by Amy M at 7:51 AM No comments:

On Saturday I visited 3 potential boarding barns near Algonac. The first barn we visited was spur of the moment, and only 15 minutes away.

Pretty big facility with a nice big indoor arena. Surprisingly, no one was there on Saturday except the daughter of the owner and her father who was dragging the indoor. There's lots of turnout, an outdoor arena and trails on property. It's 350/month, so definitely cheaper than what I pay now. The horses looked to be in good condition and nothing gave me the heebie jeebies. Currently it's at the top of my list.

Just about as big as Blue Ribbon but 35 minutes away. Smaller indoor, two outdoor arenas and a round pen. No trails. More expensive board. I liked it, but when I can get the same for cheaper and closer I put it lower on the list.

Across the Street from Mac Erin

A run down, tiny barn with future trails and a trainer. Indoor as well, no outdoor that I noticed unless it was in back. One side of the aisle has a very low roof on the stalls, Gwyn would need to be on the indoor side to have the height for safety. The trainer was showing off her never raced OTTB who was skinny and had no topline to speak of. It was awful. I thought she was telling me the mare was recently off the track. No. 10 years. She's had the horse 10 years. I played polite and made my way out. I was considering her barn for the training potential with Gwyn, but I don't want her working incorrectly with a trainer to lose top line. Oh I was so grossed out.  So that's off the list. I also sent a message to Jim and told him thank you for giving me a discerning eye.

Jim recommended a trainer, but I looked him up and that guy gets the same weird reviews that a trainer in Washington did, basically that they're kooky and to avoid them.


I was contacted by Pfeiffer Farms, which would be top of my budget at $550 but includes 2 training rides a month at a Hunter/Jumper barn that winters in Florida (LOL).  That would be nice, but maybe I'll just trailer in for lessons there rather than do training board.

I think I might aim for beginning of May arrival date for Gwyn, just to keep it consistent for when I tend to move her cross country. This gives me time to set up a vet appointment for a coggins and health certificate and schedule the shippers. Blue Ribbon is unlikely to not have space, in fact their full period is in the winter when locals move their horses to a place that has an indoor. By May most of them will have gone home. So I'll be losing some community aspect, but it's not a huge deal.

I just want to have my car (tomorrow or Thursday!) so I can start searching on my own and get out of the house.
Posted by Amy M at 1:48 PM No comments: 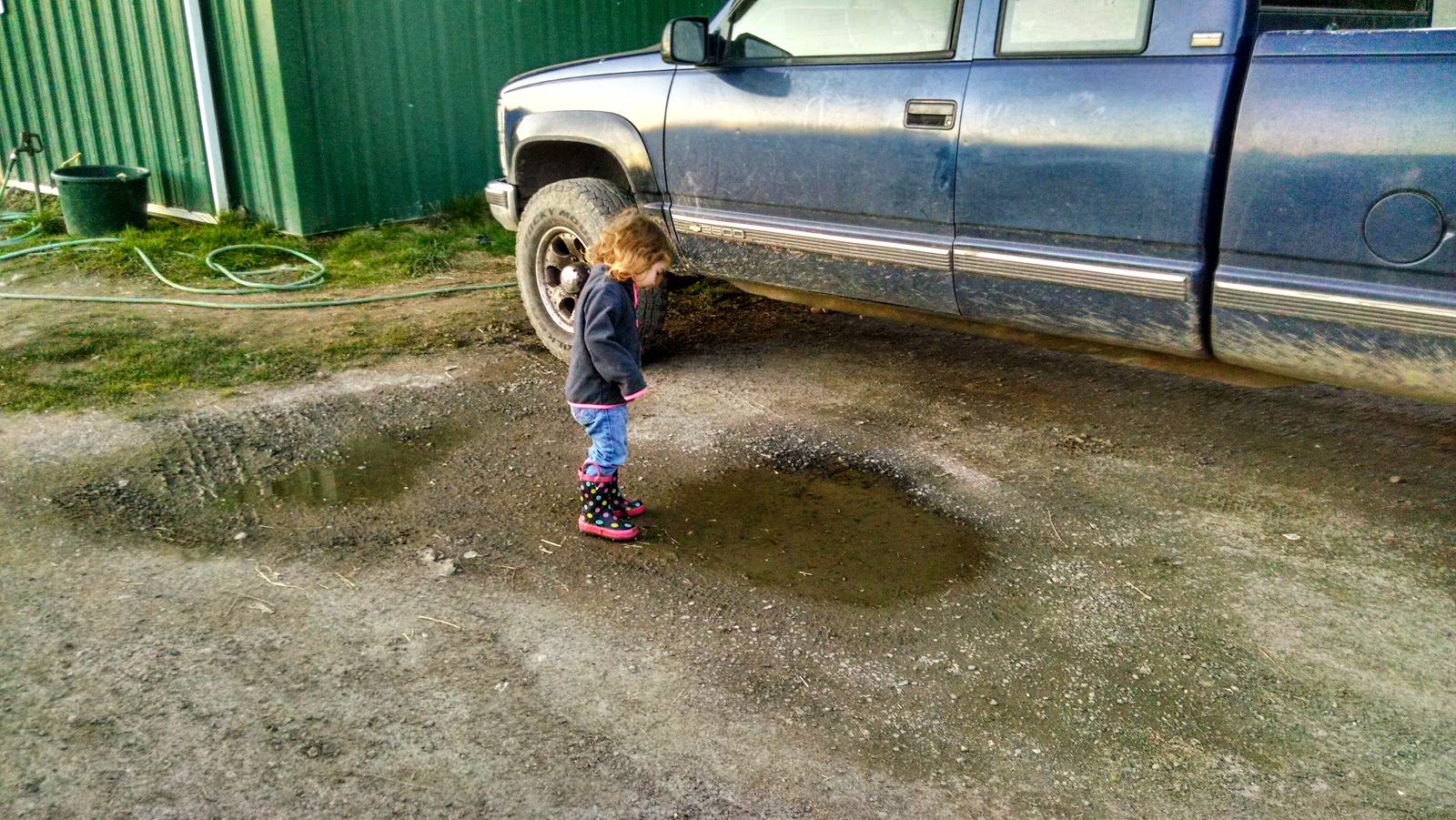 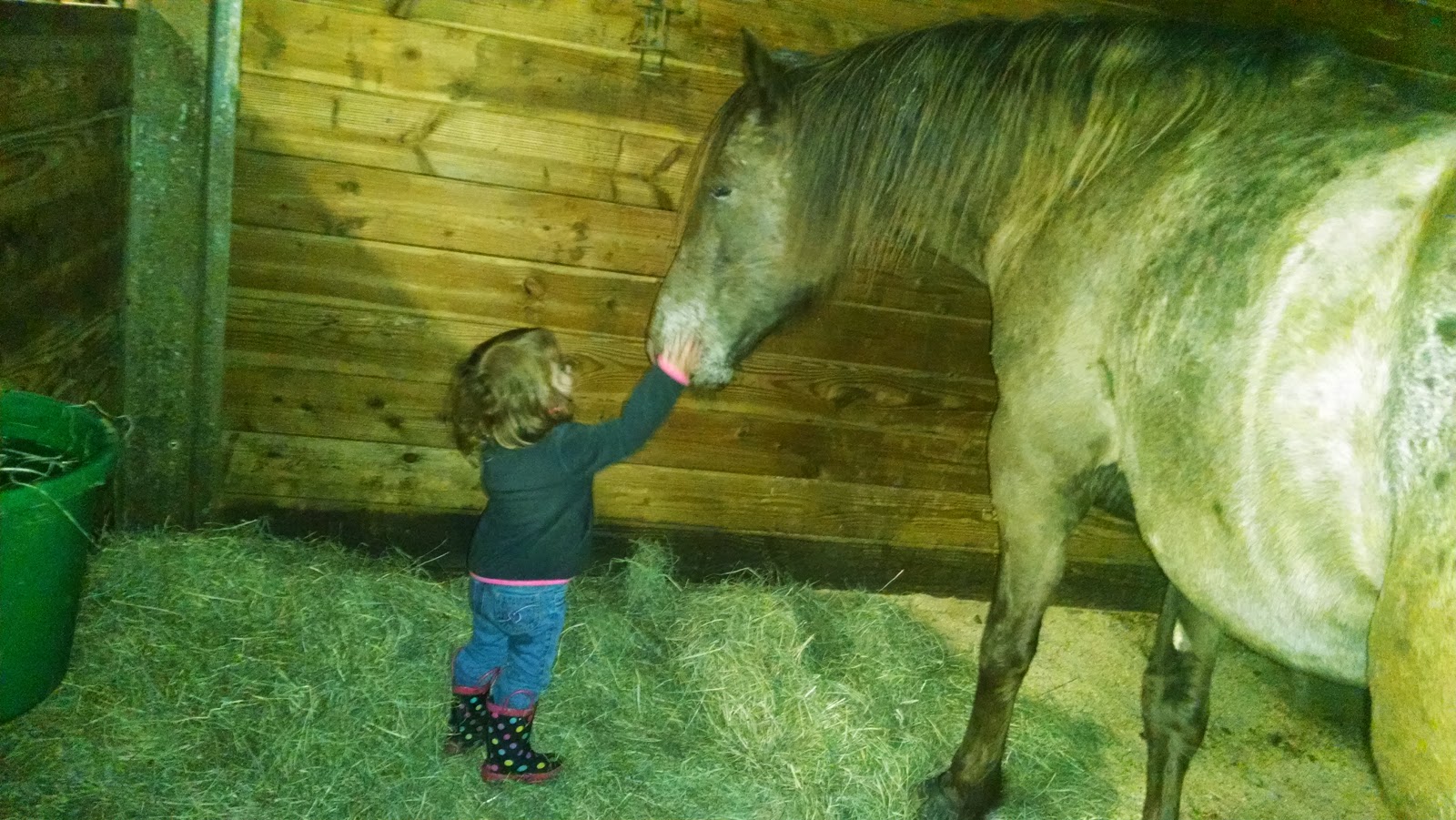 Kaylee walked up to Gwyn and patted her on the nose and said "I love you too." 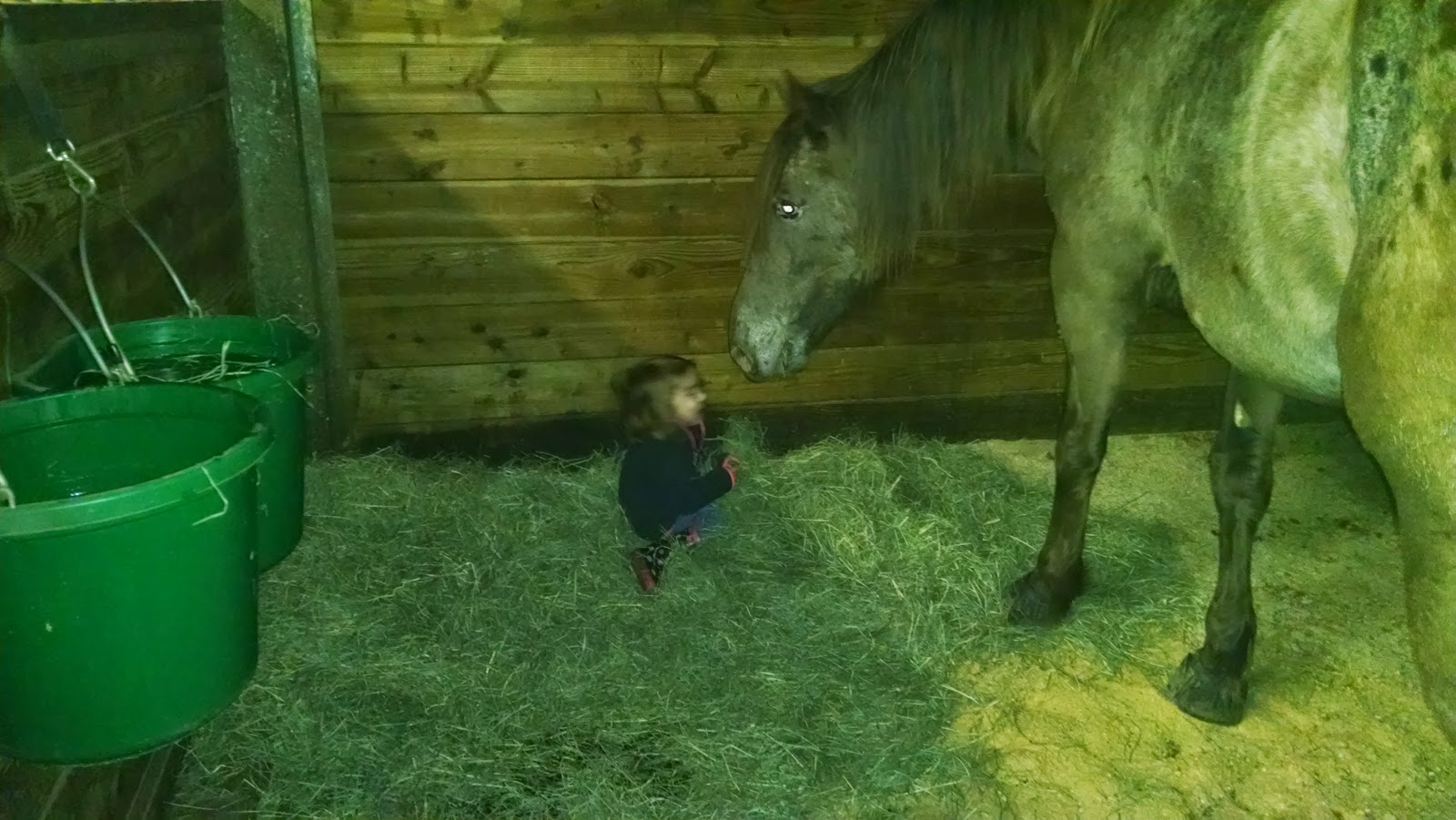 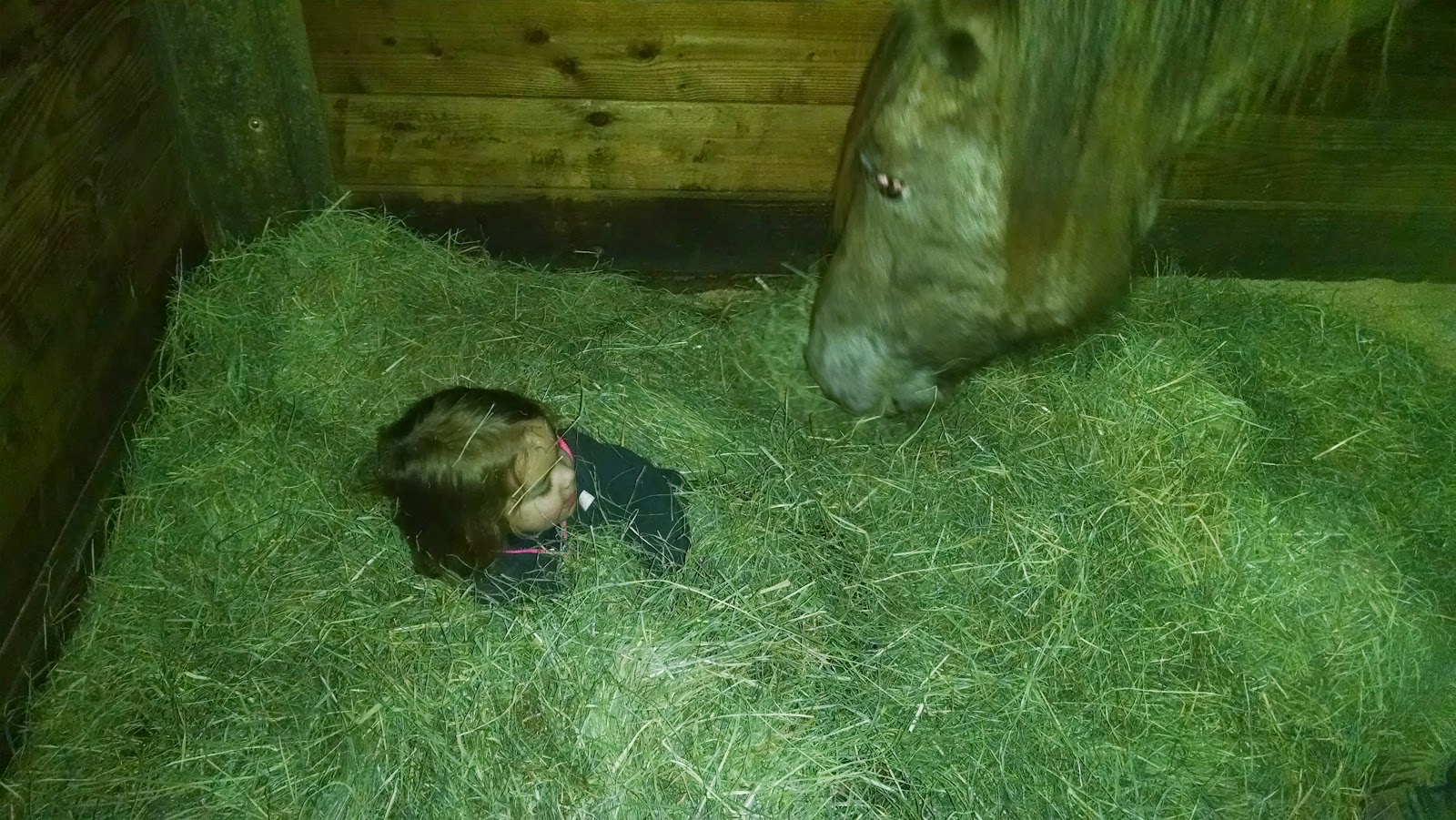 Gwyn was confused as to why she had her hay occupied by the tiny human. 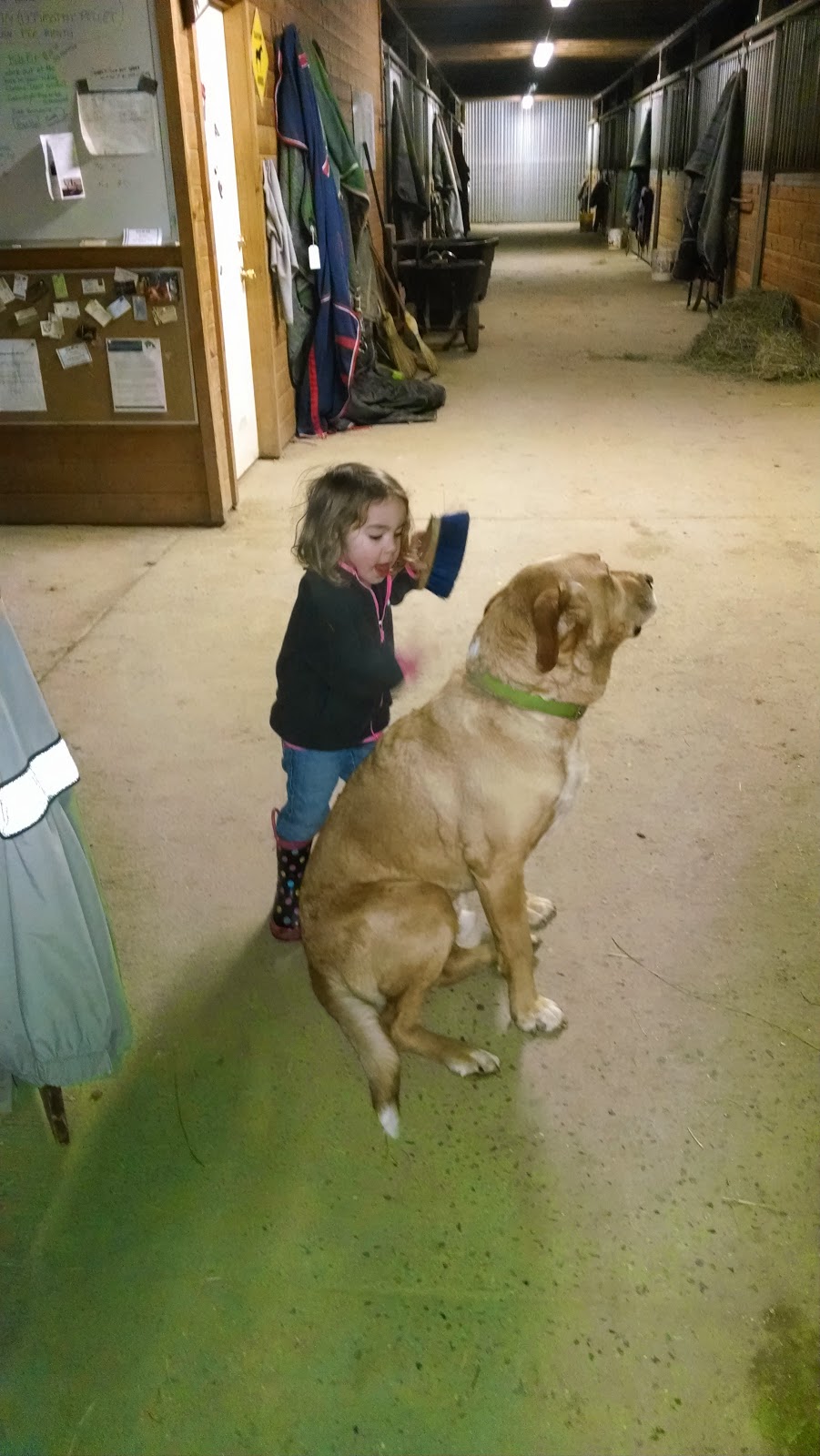 This was a hard visit for me. I'd been keeping my emotions in check while around other people for a few weeks but as soon as I walked in to hand my board checks to George I just lost it and started crying. It was rough. And then I stood in the stall with Gwyn while she ate dinner and cried more.

Deep down I know that I'm not leaving her forever, she's coming eventually, but I felt like I was leaving the best community of people I'd ever come across. Shadow's has been amazing. I don't think I'll ever find a place that compares.

I went out March 3rd as well, the day before our flight to Michigan and gave Gwyn a last grooming from me. Not so many tears and I got to say goodbye to Dani too.
Posted by Amy M at 5:55 PM No comments: