I was supposed to have a dressage lesson with Trainer E last wednesday but as I started warming up, one of the boarders went "Is Gwyn lame?"

I trotted a little bit more, and yep, things felt weird. I hopped off, had the boarder hop on and video'd so I could see what was going on and sure enough, Gwyn was just... wonky... in her hind end. There was definite uneveness but she also was perky and sassy and nothing was out of character.

There was no heat in either hoof or leg, but I think it's her SI again. Dressage lesson got cancelled. I lunged her to get more video just in case.

I went back out on Sunday, letting her have a few days to chill.  A vet was already coming out to the barn so I snagged an appointment on that farm call. I'm thinking I'll also get a chiro out, or take her to Pilchuck for an appointment and maybe ask for a round of adequan and look into muscle or joint support. Argh.

Sunday, I pulled her out of the pasture and lunged immediately to see where she was and I got a fire breathing dragon...

She's a sassy asshole who then ripped the line from my hands and required some free lunging to be reminded that I decide when she gets to move faster or stop her feet from moving. I had bought some foam pads for the both of us to stand on for stabilization and I brought them with me to see what would happen. I know there are horse specific versions but I'm cheap so I just got two pads from amazon meant for humans and tossed a towel on top.
I think she liked standing on them and was swaying gently back and forth. I lunged her again, this time in long lines and she was stretching nicely, she seemed to have more even footfalls but I definitely noticed that she doesn't track under evenly at the walk and I can't remember which side is which. So one leg would plant down in front of the front hoof print while the other hind would land ON the front hoof print. I switched directions to see if it was the bend of a circle that was causing it and still found a similar pattern (i.e. it wasn't due to a leg being on the inside).

I did ride on Sunday but kept it short and simple. We worked on a lot of lateral bending and asking those hinds to step under her body and walked across ground poles at angles.

E suggested DOMS (delayed onset muscle soreness) and I think that could be a possibility and the timeline does match up. So if you have any feed through suggestions I could add to her supplements, I welcome advice. Right now she's on Cal-Trace Plus and some garlic. She also gets timothy pellets and timothy hay. That's it.
Posted by Amy M at 12:33 PM 1 comment:

Saturday was the FCPC Derby held at Polestar Farm, where I had been clinicing with Marc Grandia. I'm still not totally confident in Gwyn's stamina over Beginner Novice fences so I signed up for Grasshopper and Hopeful. Upon looking back, I wish I had done Hopeful with Beginner Novice schooling round because honestly, Grasshopper was easy mode. But despite hindsight, my choices in levels led to a very confident horse and rider for the day, so in that sense, I definitely chose well.

Additionally, all photos are by Cortney Drake Photography and are used with purchase and permission. I ended up getting the pre-show package and it was a steal compared to after show prices. I'm glad I took the chance.

This derby is apparently a big fundraiser for the French Creek Pony Club. Their riders went first, early in the day and then volunteered for the rest of it, and it was a hot one! The way the day was set up for us non-PC riders meant that I rode dressage - cross country - dressage - cross country.   This ended up being fairly ideal for Gwyn  because we could kind of warm up the canter in a giant field over tiny fences, instead of getting super tense in a dressage warm up field.
Trailer parking was on the whole other side of the property from where competition was, which was both a blessing and a curse. A blessing, because Gwyn couldn't easily tracking beacon herself to the trailer but a curse because I had NO sense of time through the day and how long it might take me to traverse from trailer to ride time. This was compounded by the show almost immediately running behind.  I also need to figure out how to see the current time when I'm tracking my ride on my watch.

Covid rules dictated that we could arrive no more than 90 minutes before our first scheduled ride time. We also had to make our own rider numbers and digitally pre-sign Covid releases and liability releases.  There was a decent contingent from the barn attending both as "support/spectator" and as competitors.
Grasshopper:
Dressage was USDF Intro A, which I had done the week before at HHSC.  Our score for this test was abysmally worse than at  HHSC by a few percentage points. We got a 44% (so a 56% compared to the 60% of the previous week). Gwyn was also significantly less relaxed than last week. The show atmosphere was incredibly different and much busier, plus we were doing dressage in full view of the cross country course that she now considers herself very familiar with (after two clinics, lol). 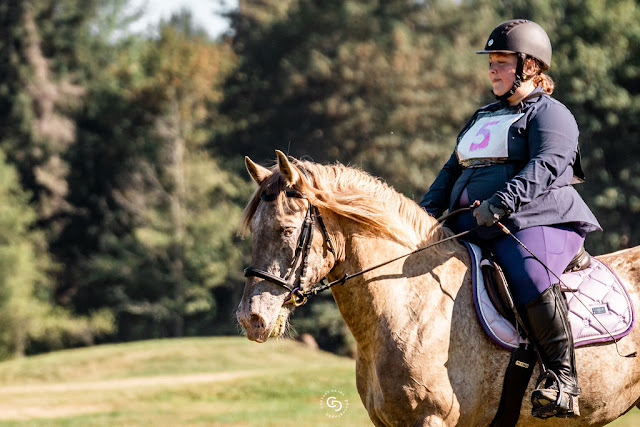 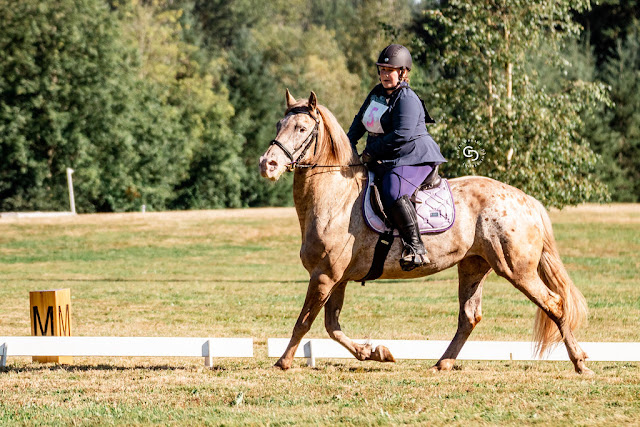 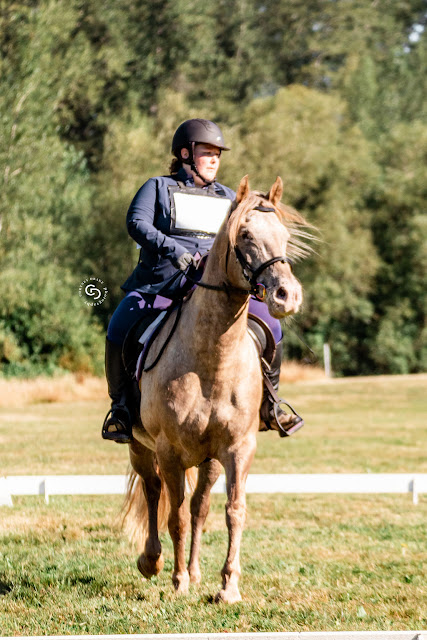 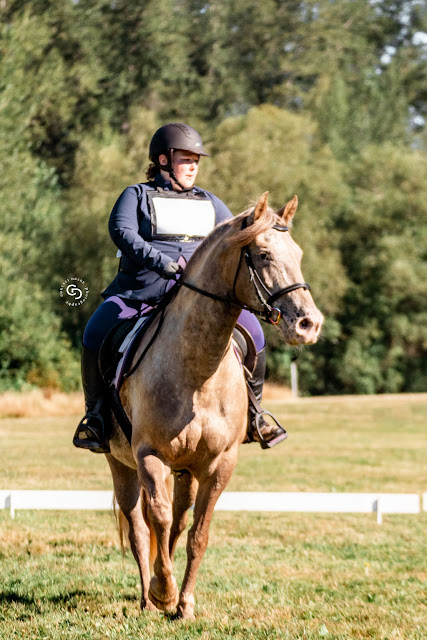 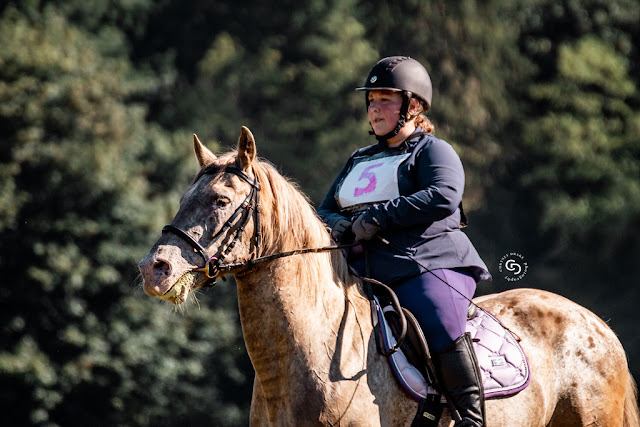 I'm not sure what I could have done better in that moment. Gwyn isn't consistently in contact, which is as much my consistency as hers. She doesn't have a lot of show miles for this to be old hat.
Cross country was held in an enclosed pasture. It was mostly tiny logs resting on the ground with a coop and a small square oxer at the end. The competitors mostly were either tiny kids on equally tiny ponies or nervous adults on very green horses. 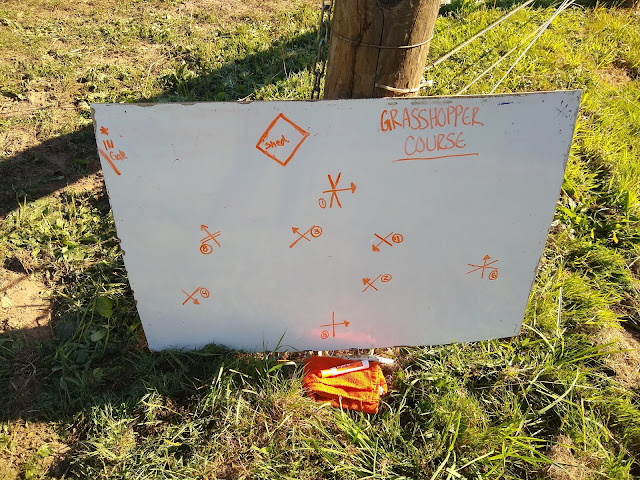 While I feel bad that we just demolished this course compared to the other adult amateurs, Gwyn did give me some left turn trouble as we turned from 3 to 4 as we'd have to turn away from the other competitors waiting for their turn in the ring (in the only shade at the time). But I remembered what Marc told me and trusted in the fence and made her turn left.  We had enough room to manage it and it really cemented the control for me and after that she gave me no trouble with the steering the rest of the day. So being enclosed and treating grasshopper like a warmup round ended up being good for us. Gwyn was confident coming into every fence and some she just took in a giant trot or canter stride. I really liked all the changes of direction they managed to fit into this tiny course AND all the little bits of natural hilliness. 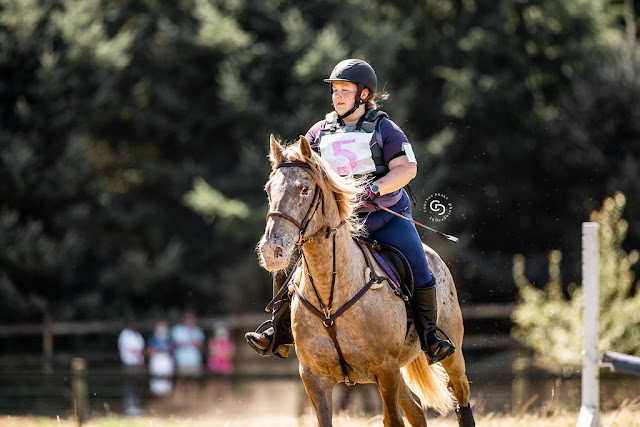 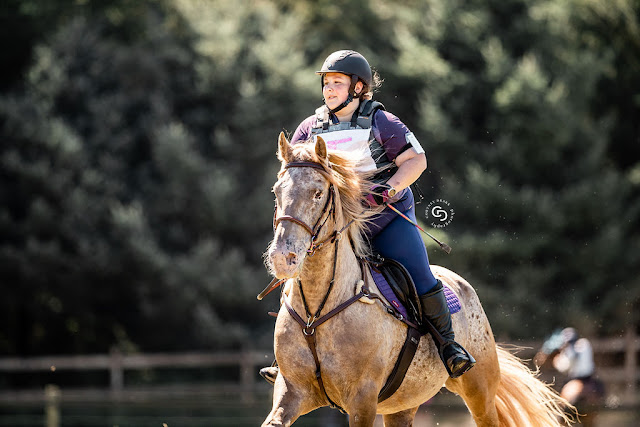 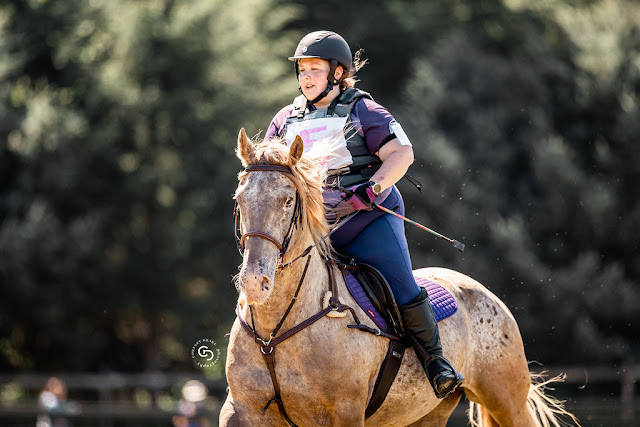 I just love this sequence: 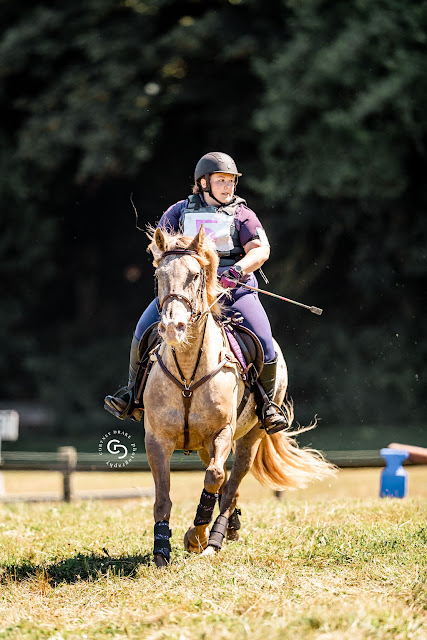 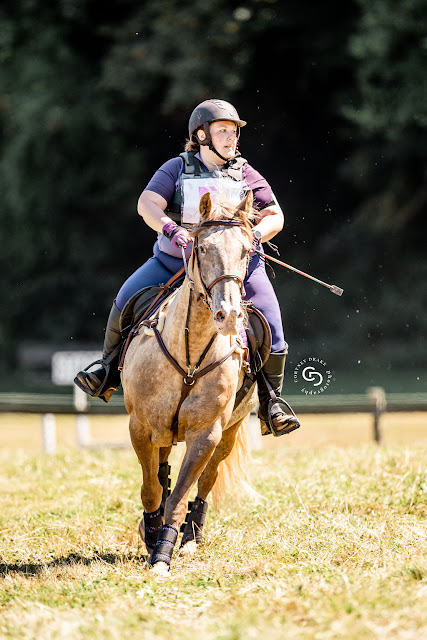 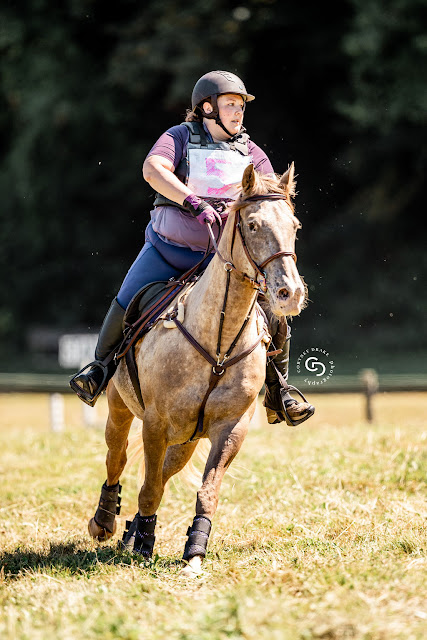 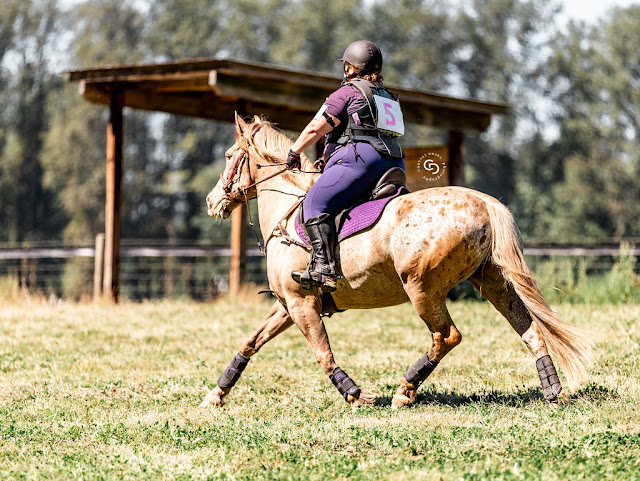 And all done! We tied for third in our division, but lost the tie in the collective marks. Apparently I get a ribbon, I just didn't bother waiting around to pick it up, or to schlep back on foot to grab it. 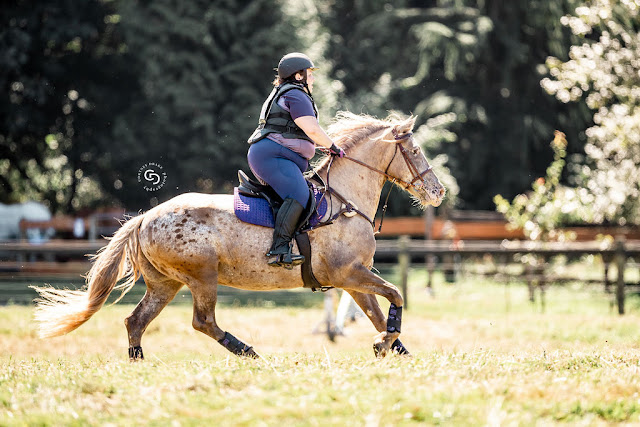 Hopeful:
Dressage - USEA Beginner Novice A
I got Gwyn cantering in the dressage warm up field and she was listening pretty well. Rather than wear her out, once I had a solid canter both directions I just worked on bending and walking. It was hot and we were out in the sun (I stupidly forgot to wear sunscreen)
I did not want a repeat of my leaving the arena during the canter of last week, so I intentionally sacrificed my geometry of my circle. Also, screw the canter lead. At this point I can't be picky. I just have to work with what she can give me. Dressage lessons are for fixing that later. So my BN A test was rougher than rough and we ended up with a 49.7%.  Oops. Again, things to work on.

It was hard to estimate timing so I ended up riding in my jump tack, just with the running attachment removed. 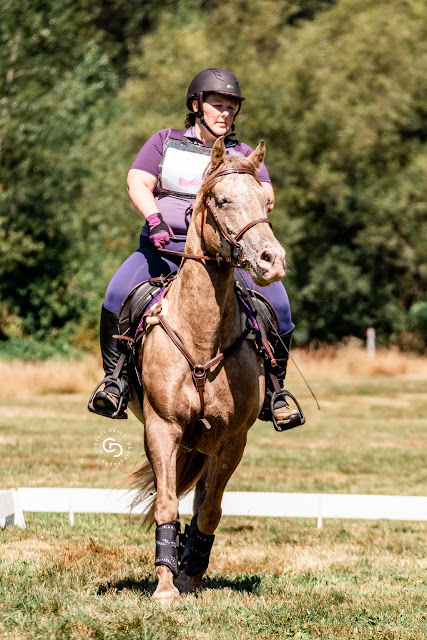 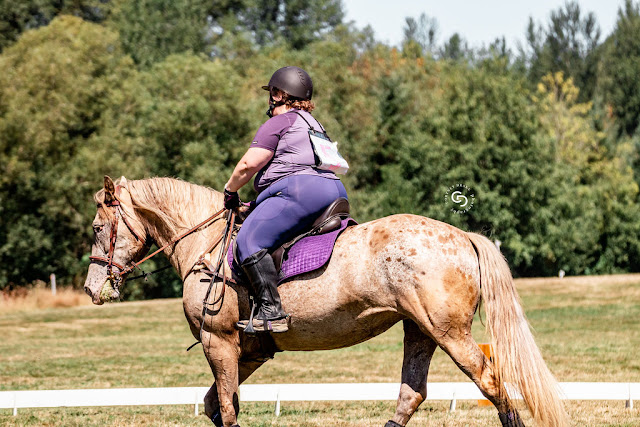 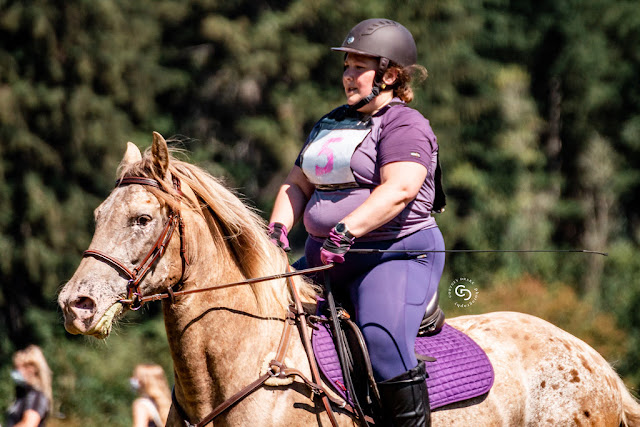 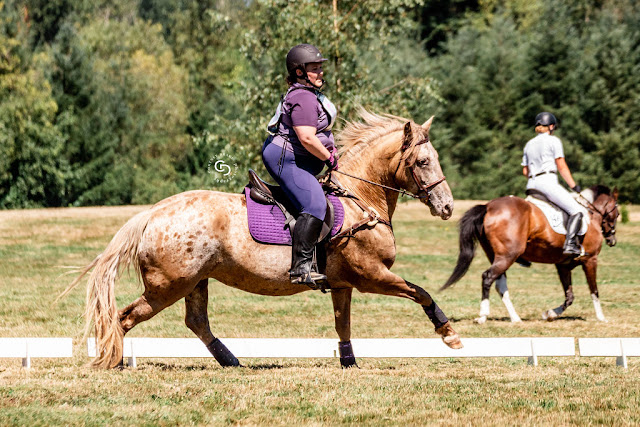 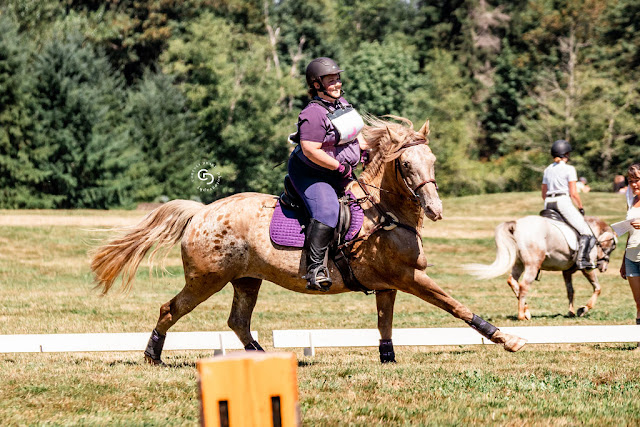 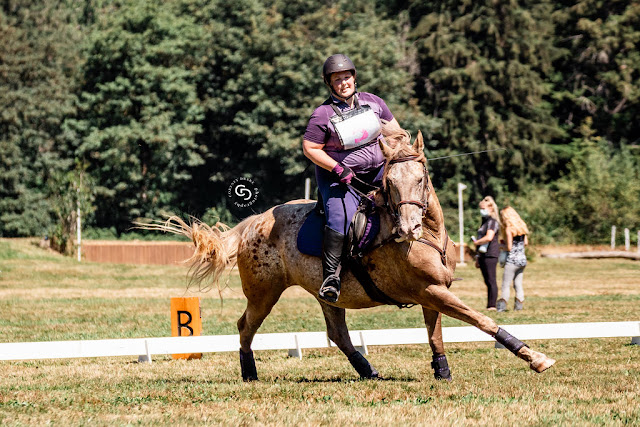 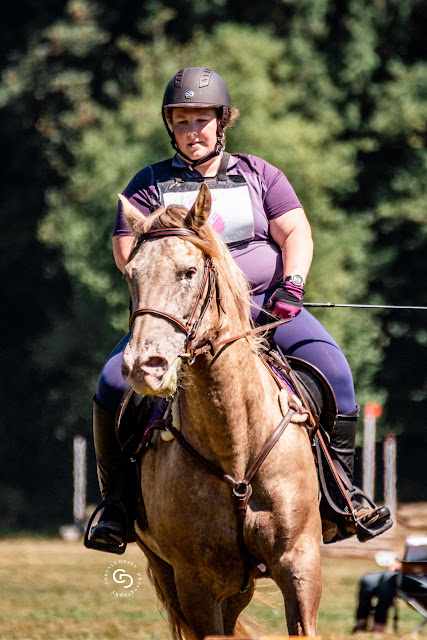 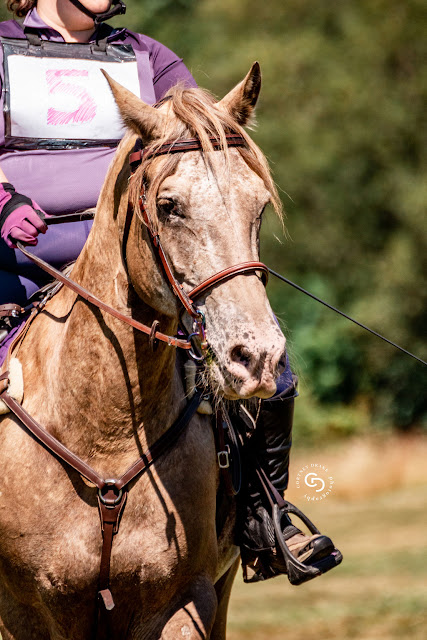 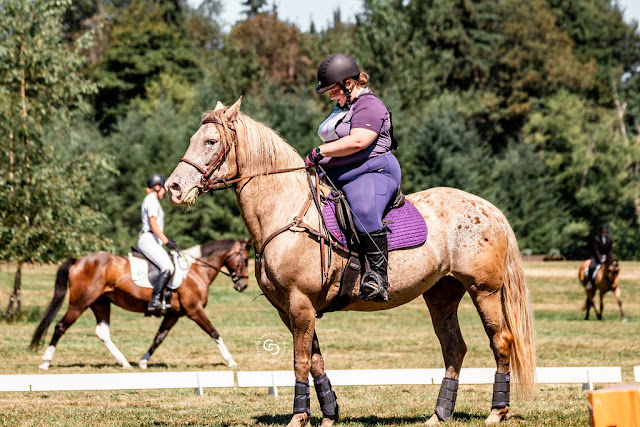 Cross Country
I didn't jump much in warmup. There was a natural fence for warmup that we popped over a couple times, but I didn't want her getting too hot and she was feeling really good coming into the few jumps I did. I definitely took a "less is more" approach to warm up here.
This was FUN. Most everything was a larger, colored log, all of which, with one exception, I'd schooled with Marc Grandia. I didn't walk this course because it was just an out and back loop and from each fence you could see the next one. After watching a couple riders on the course, I just winged it.
Gwyn and I took off away from the group of competitors and she was just so eager to be out in that giant field of jumps. She was really good with steering and I did have her in the baucher lozenge that I normally use for endurance. 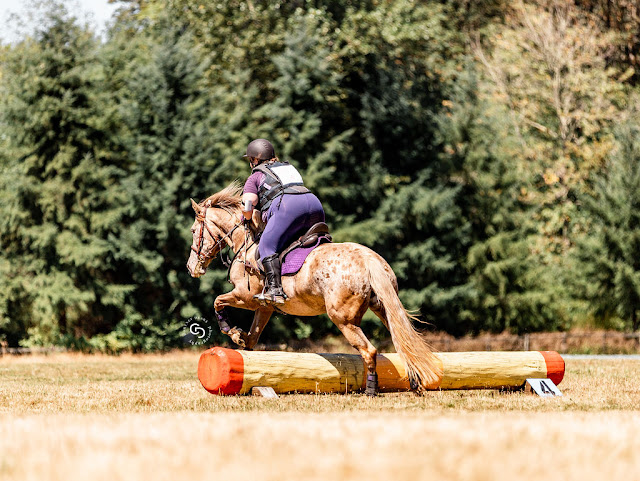 Gwyn was forward and willing to gallop and rate back down between fences. Since I don't trust her straightness in the canter on approach to jumps, I would balance back down to a trot since none of what we did needed more than that. 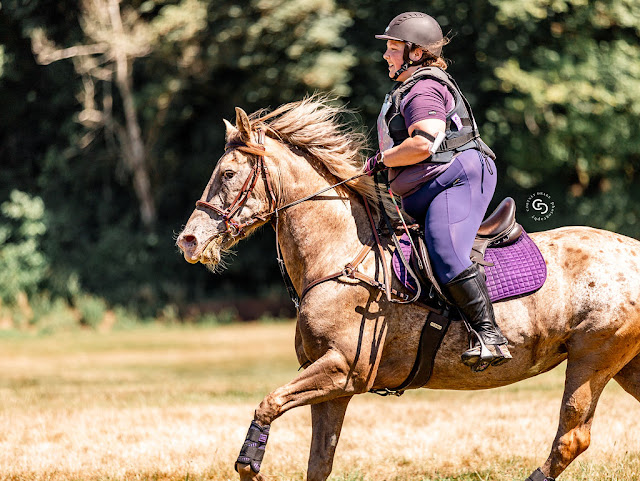 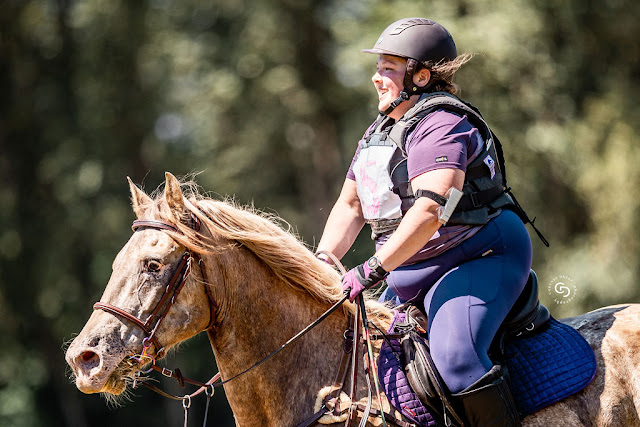 There was an upbank on course that we hadn't schooled before, but I still have Marc's voice running through my head in how to approach and how to stay balanced and we nailed that too. Gwyn was definitely looking at the bigger bank complex and I needed to redirect her. I love that she wasn't scared off by the bigger stuff. She was eager. 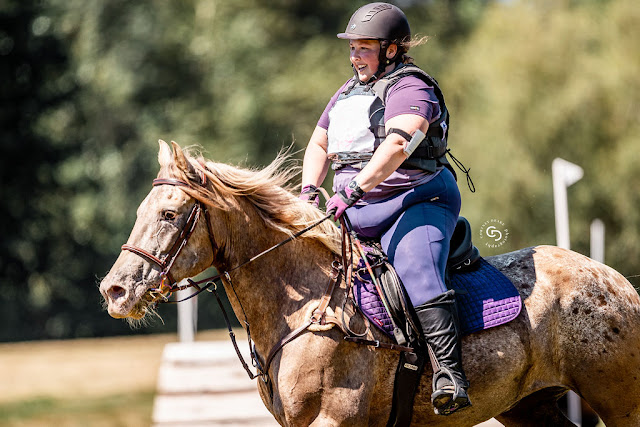 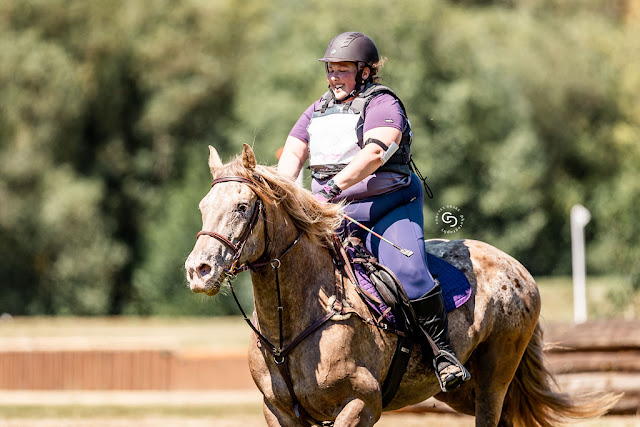 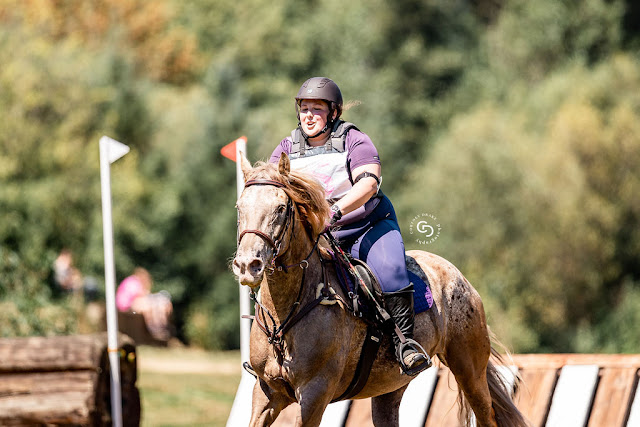 We walked a bit to cool out, but I didn't hang for long, only enough to watch a friend do her course and face immediate regret I didn't sign up for Beginner Novice. Then it was back to the trailer where Gwyn sucked down a ton of water and I started packing up and cooling out myself.
All in all, it was a good day for the two of us. There is another Derby I think on my Birthday weekend in October that I will be at least doing a schooling round for Beginner Novice. And I have a dressage lesson already scheduled that may have already happened by the time this is posted.
Posted by Amy M at 2:30 AM 4 comments: