It's been cold and I've been battling mystery cough illness and some exhaustion. It makes riding difficult. I've ended up taking naps just to get through the day.

Today, I had enough energy to get out of the house while there was still daylight, with Hazel bundled up on my back, to go out and clean the barn. The manure has been building up from midweek. I keep the stalls clean but the runs start to accumulate more than I can get picked in the dark after work or once the poops have frozen to the ground.  Thanks to some freezing rain the other day, the parts of the runs that aren't covered are pretty much an ice skating rink and Gwyn and Saffron aren't going out on it at all. I don't blame them.

Anyway, after getting three wheelbarrow loads of manure out of the runs and getting the stalls nice and clean (note to self, go get more shavings...) I put the dinner hay in the stalls, threw a halter on Gwyn and took her for a walk.

I've gotten permission from our rear kitty corner neighbors to use their property to access the fields behind them. I wanted to see what that access looked like before riding up there, and also familiarize Gwyn to the walk up AND see how Saffron would behave if we just walked away.

Everything went well!  Saffron called a few times, but Gwyn was focused on me for the most part and behaved.  The path to the fields is NOT riding accessible, just on foot, until I can cut back some branches. So my plan with that is to bring up some cookies I made and ask if I can clip them back in that one spot. Yay bribes!

I've also been contacting the landowners of the fields back there to get permission to ride and so far I'm a go!  This is really going to make getting some good conditioning rides much easier to get without the fuss and time committment of trailering out. I'm very excited! It also opens up the possibility of accessing the Polly Ann Trail from home without dangerous road riding.
Posted by Amy M at 9:07 PM No comments:

This is a kind of horsey post, I've xposted it from my Mom/Science blog.

Since moving to Michigan I've gotten pretty involved in the Great Distance Derby, which has connected me with some local, likeminded horse people. I've gone to Flint to donate water with them on two occassions and gone on some trail rides. I even 'walked' a trail ride with Gwyn in hand just to get out and socialize while I was pregnant since I wasn't allowed to ride.

The person who organizes GDD has also started organizing a Michigan and Midwest Mounted Archery organization, and is bringing clinics to the area. I wasn't able to do anything last year, but I have done some mounted archery with the SCA back when I lived in Florida. I was a fan of it then and I see no reason why I could do it now.  At this point I'm trying to dial back my expectations of what competitions we can do without really sinking time and money into some training for Gwyn and myself and being realistic about what is within our reach and what is possible in the future.

Anyway, that's musings for a whole post on its own. Suffice it to say, mounted archery is a pretty darn reasonable hobby and the clinics are reasonably local and kind of budget friendly with the added bonus of including camping! Yay! I love camping!

So for christmas, Eric got me a very basic, junior archery set.  Two arrows, a cheap bow and finger and arm guards that are not meant for my fingers or arms. 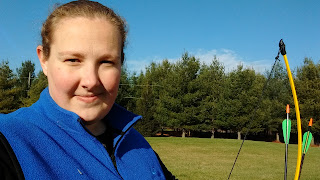 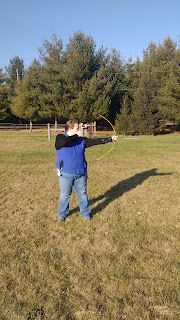 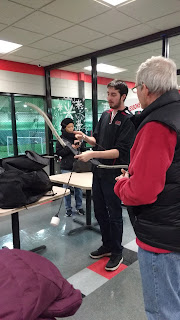 For winter training, my friend Heather organized a group of us to meet up and do an activity called Archery Tag at a local indoor sports complex. You get totally cool face shields that fog up the moment you start sweating. 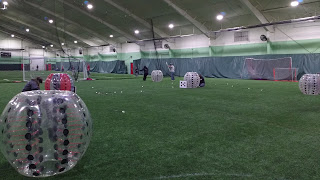 And play on an indoor field with fake grass and 'obstacles' 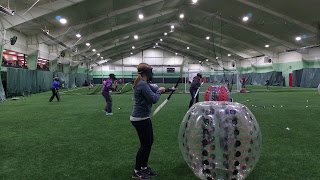 It's basically like dodgeball but with a bow and arrow. 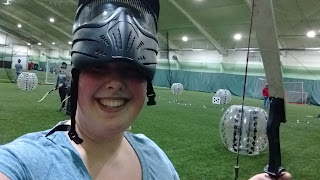 AND SO MUCH FUCKING FUN OMG 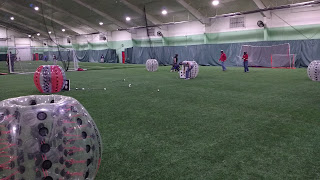 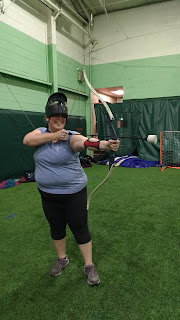 The arrows are blunted foam and while you can feel them make contact, you aren't hurt, mainly because each team is kept separate from one another. You don't cross into the other team's territory and the  neutral middle is where you aren't allowed to shoot from or be shot. 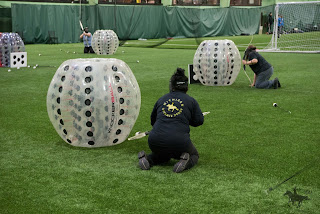 You can see me in the top part of the picture aiming at Heather, lol. 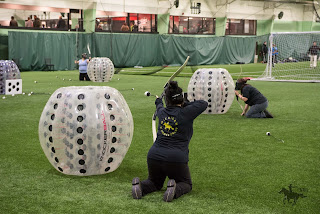 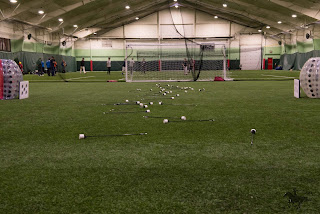 The game starts with all the arrows in the middle, Hunger Games style like the Cornucopia. 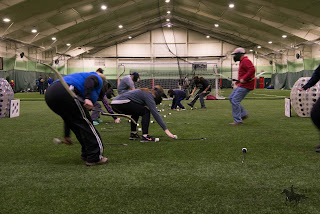 The referee counts down and then it's a mad dash to the middle to grab arrows and then back to be out of range (or at least at an easily dodgeable distance)  or hop behind an obstacle to snipe the other team.

You get someone out by hitting them with an arrow. But, if you grab an arrow, the person who shot that arrow is out and someone on your own team can rejoin the game. 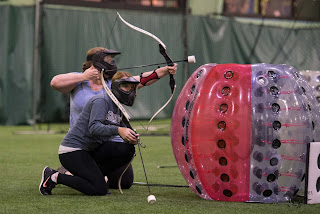 I like hiding behind things, but the constant crouching and standing up to shoot and dropping back down. Let's just say I did a LOT of squats. My legs burned FOR DAYS. 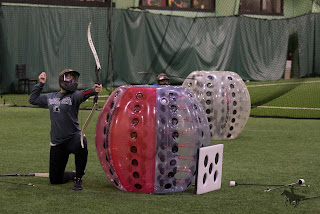 You can also see the white target with black spots. The game was won if you either took out all the opposing team by hitting them or if you knocked out all five of those foam circles. Our team won boths ways! 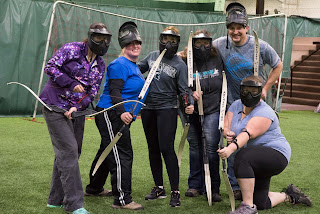 Team "Don't Shoot Me!"  which is retrospect was in poor taste....

The plan is to do this monthly in the cruddy winter months (Feb and March) before clinics start up and riding can begin in earnest again.  Until then, I'll be using my baby bow to desensitize Gwyn because I'm planning to do a clinic in June!  I'm so excited!
Posted by Amy M at 7:45 PM No comments:

2016
March
Teach Gwyn one trick! TBD  Gwyn learned to stand back and wait for food at dinner time! Useful!
April
Avoid going into labor during Distance Derby dinner  Check!
Introduce new baby to Gwyn Super check! Though we barely got this done in April. Much adorableness was captured
May
At least sit on Gwyn Check!
Alt goal- teach second trick to Gwyn/teach to highline in prep for camping Check! We got the highline down!
June
First post partum trail ride!  I don't think I got a trail ride in until July or August. Babies are needy.
July
Ride once a week HAHAHAHAHAHAH
August
Endurance ride at Kensington, novice 15 mile  Check!!  I made a further goal of maintaining a 6 mph pace and achieved that!
Ride twice a week Let's just assume that the 'ride x per week' weren't achieved.
September
Ride three times a week
Go to a hunter pace or local dressage show  I'm marking this as completed because I went to both a hunter pace AND the hunter trials but everything was in October.
October
LD endurance ride at silver Creek Check! Turtled the 30 mile and had a blast!
Polly Ann trail fall ride I ended up opting for the hunter pace instead of this event since they were on the same weekend and I ended up having to work that day.
November
Ride three times a week
December
Ride on new year's Eve Achieved!  I got 1.17 miles around the pasture with Gwyn
Teach third trick to Gwyn

I'm overall pleased with the goals that I set versus what I achieved. I knew the year would be a challenge because of a new baby. And riding really did drop off toward the end but to that I blame more my new job. It's a balancing act being at the job and then also making time for both my kids who want to be with me, and riding is time away from them. Even Kaylee has expressed that she misses spending time with just me. So I'd pass up potential riding time in order to be a mom first and foremost.  That being said, here are my 2017 goals, with my job taken into account: I might make monthly ones later, but we'll get there when we get there.

Attend 3 Limited Distance rides (Brighton in April, Metropark Express in August and Oak Leaf Run in October)
1 Hunter Pace
School cross country at least once
Trailer to or have a trainer come to the house for at least one lesson
In months where I don't have an event, trail ride at least once a month.
Get permission from landowners to ride on farm field perimeters

So Belated Merry Christmas, Happy Yule, and Happy New Year, so long 2016, don't let the door hit your ass on the way out. Lights in the barn so my imagination doesn't go into overdrive when I open the door in the dark. 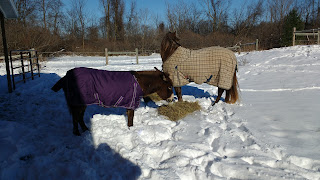 Saffron has a new sheet for resisting the elements, especially since we get some incredible wind.