We went south to Myrtle Beach (via car) for Christmas, hence the radio silence. I tend to not do bloggy things without at least a laptop and I didn't want to use my parent's computer. All of the critters were in my neighbor's capable hands.

The kids had a good time, I got sick AND injured (though I managed to do quite a bit of exercising which is great for me!) and I'm still recovering from the injury.

Meanwhile, it seems that Saffron decided to be a troublemaker while I was gone! Neighbor texted to inform me that Saffron went on walkabout one of the days, but was caught and returned.

Of course, when we got home (2 am, decided to drive all the way through rather than stop for the night thanks to a vomiting child...) I was rudely woken up early by the news that Saffron was out AGAIN.  And then got a text that she was out a second time in the same day.

It's been about a year since her last escapades but we had discovered her means of egress and blocked it. Her method is once again a mystery.

And then last night I got a message from Cheri that said that Blanche, Gwyn's aunt, had passed away in the pasture.  They found her down in the yard, with erratic movement that the vet later said indicated a possible heart attack. She was gone quite quickly, which is a blessing. She was a grand old mare, just a few months shy of 27 years old and had done a LOT in her life.

My friend put it best:

3 hours ago, we lost one of the most phenomenal, athletic, and beautiful mares that I have ever owned. Eric and I came home from an afternoon out, to find Blanche down and uncoordinatedly ‘galloping’. In the time it took for us to find her, and call the vet, it was over, and she was gone. The vet says she had either a heart attack or an aortic aneurism; the ‘galloping’ movements being one of the classic signs. Either one, didn’t matter. It was over super quickly.

While I am incredibly sad, I am glad that Eric and I got to be her final owners. And tho I was raised on a horse farm, Blanche taught me so very much. She’s the first senior horse I’ve ever owned. She loved men and children about as much as she loved peppermints and chicken salad sammiches. She was careful with toddlers and new riders, and a fancy, saucy ride for the more experienced. She was always careful when she took a treat from you, and never stepped on someone unless she thought they deserved it. She only kicked me once because I touched her udder while applying bug repellent. She never kicked Eric. She had 7 babies, of which Nyx is the last one. She excelled at combined driving, got 9’s on her trot in driving dressage, and qualified for World. She and two sisters pulled their original owner 3,200 miles across the U.S. to raise awareness for handicapable horse men and women. She also loved to tilt and joust, tho she wasn’t too keen on mounted combat. She loved a good stall, and several times she busted out of her pen and parked herself on a neighbor’s porch. She was an unofficial member of the BCSO Mounted Posse.
Stonewall Blanche, big leopard Stonewall Sporthorse mare, you almost made it to 27. You were amazing. Gonna miss you so very much. 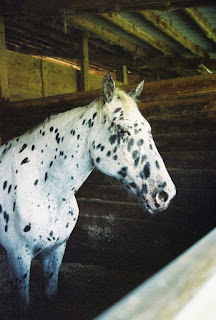 I dug through my past photos to find the ones of Blanche. They were taken when film was still better than a cell phone. 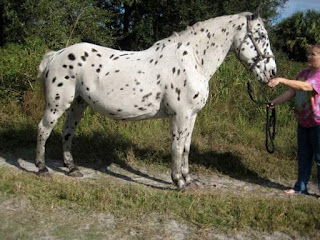 And now I'm finishing my vacation glued to the couch, foot elevated and KT-taped while watching the Lord of the Rings trilogy. And I'm going to hug Gwyn tonight and teach the new foster child next door everything she could ever want to know about horses. 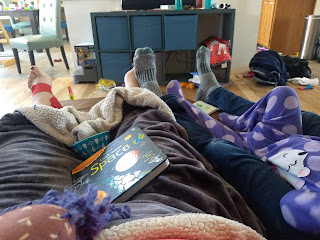 When I checked my mail this morning, I had a small package stuffed into the mailbox and sure enough, it was the awesome gift I won for having the most volunteer hours back in September. These were well worth the wait and I can't wait to get some between the ears time to test them out.

For tonight, Gwyn was a VERY unwilling model (she wanted to get back to dinner and was Highly Offended when I took her out of her stall) 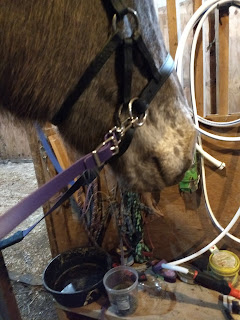 I'm already looking up care instructions (looks like a wool wash is recommended, which I already have because we are decked out in merino wool items) but I'm really excited to start incorporating these into my trail riding. They really feel nice in my hand and substantial!

On Saturday, with one kid refusing to come outside and the other intent on 'hleping' (intended typo there...) the SO and I went out to deep clean the runs.

Full disclosure, I am a lazy horse owner and clean outside the barn the way I clean in the house, leaving little things until they're big things and then doing a major deep cleaning. The stalls stay good and the pasture stays good, it's just the dry lot that gets looking bad...

The runs needed a deep cleaning and this was the second day in a row of above freezing temperatures, so thawing manure had to go.

Gwyn and Saffron were taken to the spring pasture, much to their delight. 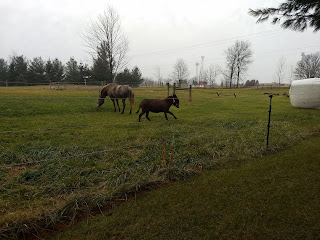 
Sometimes you just have to be snorty because the neighbor is going for a walk! #horseoftheday #horsesofinsta #donkeysofinstagram #donkeyoftheday #stonewallsporthorse
A post shared by Quantum Chromatic Aberration (@quantum_chrome) on Dec 15, 2018 at 4:52pm PST

I hooked up my trailer to the ATV and just tackled the giant pile of poop with the gates wide open to facilitate moving things around.


I managed to get all of the not too frozen poop out of the run, and boy was it a HUGE improvement.

Meanwhile, Eric determined that we needed a new manure pile spot because he apparently has something against using the trash service to haul away manure. So he raked in the old straw from the original manure pile that was there when we bought the property and then made a barrier using the T-posts and some of the pallets we had lying around.

After that, he fixed the stall liner that was coming off the wall for me and then helped me take down the electrobraid that gives me three runs so that the animals could have one giant dry lot. It's just Gwyn and Saffron so I don't really see a need to have three separate runs. It'll make replacing the footing, which needs to happen at some point, easier if it's one big space.

So now my dry run is much nicer and cleaner. And so every night since I've been making sure to pick up what new poo has acccumulated and you know what?

My fingers don't go numb when I do this.

This may sound like a strange revelation, but I have some poor circulation issues, a combination of Reynaud's and cold urticaria. Most nights in winter even the thickest gloves would leave my fingers like ice, and super painful.

If I do a brief poo sweep, and fill my manure bucket, not even the full wheelbarrow, all I need are my Back on Track liners and I come in with hot hands. Just adding that little bit of activity is enough to push me into blood moving versus normal barn chores and it's been lovely.  My barn is cleaner and my hands are happier each night when I go back inside.

I've also now used the Magic Brush twice in a row. I love how mud just disappears and how soft it leaves Gwyn's coat. Tonight I tried it on Saffron. If Gwyn is a sappy, loves any kind of attention that could be semi-related to grooming kind of horse, Saffron is the opposite. She is standoffish, she is not affectionate and she tolerates me grooming her (she'll stand still for the kids for hours though)

I think she likes the Magic Brush. Which means it's definitely magic. And bonus, Donkey winter coat is super wiry and thick. Normal horse brushes really don't work well on it unless they're super stiff and yet the Magic Brush cut through and lifted dirt off of her. I couldn't believe it.

So now I need to get Saffron her own. Maybe two for Saffron so the girls can brush her at the same time.
Posted by Amy M at 5:59 PM 7 comments:

An unassuming little package appeared on my front step this morning, much to my children's delight, as they've very quickly figured out that packages this time of year mean fun things inside. Oh the holiday season ;)

My secret santa gifter was Kristen of Stampy and the Brain! 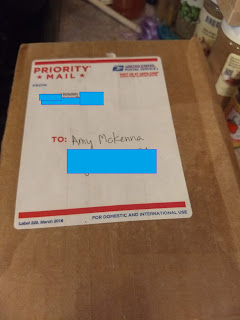 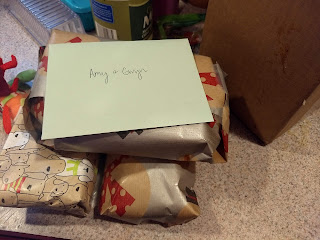 Inside was some very delightful wrapping paper and a super cute holiday card! 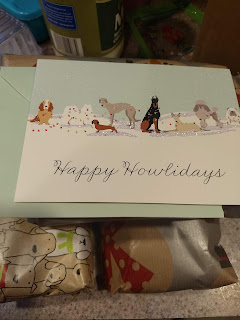 First thing opened was this VERY purple lead rope! And you can never have too many lead ropes. And my original purple lead rope is starting to fray/fade so this is well timed! All my spares are NOT purple and that is just.. ugh. Not acceptable, lol 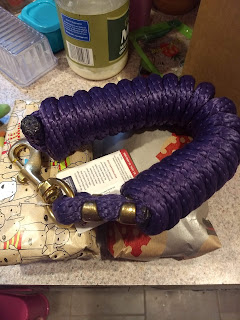 Then, since there were three wrapped items and Kaylee was standing anxiously at my shoulder watching me open the box and first gift, I let her open the second to reveal a magic brush and new hoof pick! I know that Kristen had posted about how Maestro really really fell in love with this brush and I had honestly stuck it into my saved items to consider purchasing so to get one, and purple, is just fantastic! Gwyn loves being groomed and with her winter coat, being able to pull up some deep dirt and give her a good scratch will be nice! I'll be heading out to do some deep cleaning of the barn in a little bit and will definitely give the brush a go and see how she likes it (Prediction: a whole lot!) 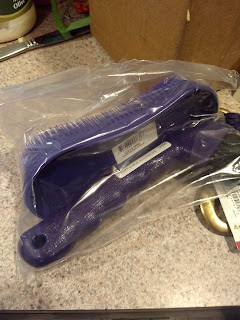 I was also looking for another hoof pick of all things, and boom, one appears!

Finally, Hazel got to open to the third package which I think she thought meant it was hers. ("A UNICORN, Momma!" ) It revealed, (and I could be wrong, but it looks JUST like what they make) a Bel Joeor pouch, in my fav colors, with horse treats enclosed! 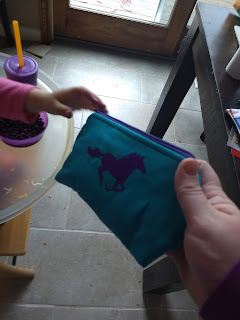 So thank you, Kristen! And we ARE super close to each other. I think Brighton Rec Area is about a halfway point for each of us and it would be awesome to meet up!
Posted by Amy M at 9:45 AM 12 comments:

I think I've previously mentioned this, but I live just on the outskirts of a very horse-central town in Michigan. Their activities revolve around horses and it's like... magic for a horse crazy person like myself.

They have a Horse Celebration at the end of summer and have breed displays and draft pulls. There's a yearly barn tour of the fancy schmancy barns in the area. Pretty much the Metamora Hunt members are likely also the Metamora Chamber of Commerce members and so what they say goes and I'm totally okay with that. It's their thing.