My Ghost is somewhat solved!

So the next day after I'd made the post about my barn ghost, Saffron escaped. I was in the bathroom and heard Gwyn whinny.

Sidebar:
One of the perks of having your animals on your own property is you get to know their habits and behaviors. You KNOW when something is out of the normal range. Gwyn whinnying only happened at ONE time, when she hears our sliding doors screeeeeech open at dinner time or if Saffron is not with her.

Saffron was not with her. I look outside from the bathroom window in time to see Saffron merrily trotting her way up the neighbor's driveway to go find some grass. I grab the baby, toss warm clothes on her and go grab my carrier so we can go catch a donkey, while Kaylee frantically tries to get her warm stuff on so she can come with me. Thankfully Eric got home as we were heading out of the house and I tossed him (not literally!) the baby and went running to grab a halter and leadrope from the barn as well as some treats for bribing.

Much musing was had. We set up the Nest Cam to face the barn, thinking we had an intruder, but now we were wondering, was there a spot where they could escape. I thought it was the gap by the water tank and stuck in a couple of poles to make it more difficult. I also turned the electric on the fence back on.

The next morning, we're getting ready to leave and the donkey is out AGAIN.  I rush to again get the kids ready to go outside so I can catch her and hope that it won't make me late for work.

That day, while at work, I get a text from the neighbor and from Eric, who is monitoring the nest cam from his phone.

Neighbor: Your donkey is in our yard.
Eric: I saw how she got out. Donkey has escaped. I'm going home to get her back in.

The neighbors I originally suspected of my windy day ghost texted me right away when something went awry, so I'm betting it was not them who caused the strange goings on. They helped get Saffron back in and that was right when Eric got home and she promptly went to her little spot to try and get out AGAIN.  He tossed some sticks in the way and put together a temporary lower fence line.

That super smart donkey found the ONE spot where the slope of the land made the lowest strand of electrobraid decently far up off the ground.  She walks up to it, gets on her knees and scootches underneath it. Her super thick winter coat probably shields her from the zap.

You can watch it for yourself:

Now, this still doesn't solve my 'who locked Saffron in' and 'how did Gwyn get out' conundrums, but it's a start. My working theory is one of our OTHER neighbors saw Saffron escaped, got her back in and locked her up (using the pine pellets as a grain lure not realizing they weren't grain).


Or Gwyn just fucking jumped because we have plenty of previous experience of her doing that because she can. 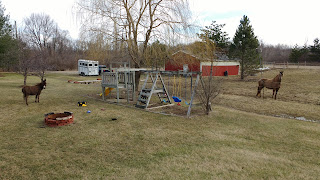 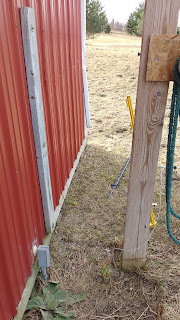 My original suspected escape route, later proven to be wrong. 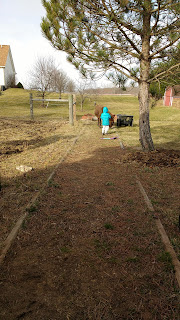 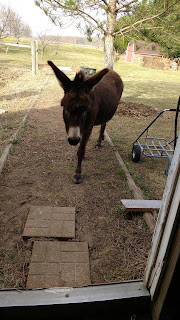 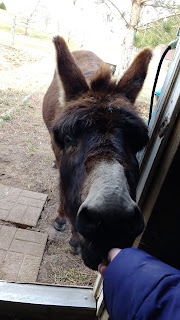 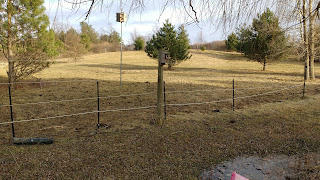 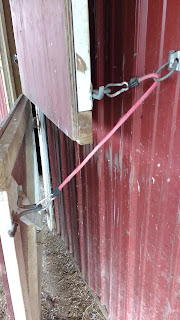 My ghost had to have undone BOTH of these carabiner clips and then latched the bottom stall door. 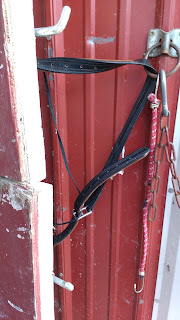 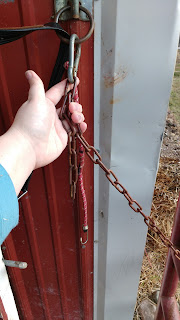 And if a horse was let out, they reclipped the gate. 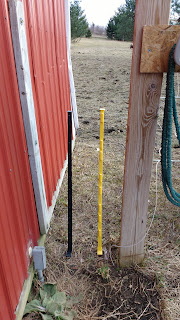 Anti donkey measures. Gwyn is too wide for this space. 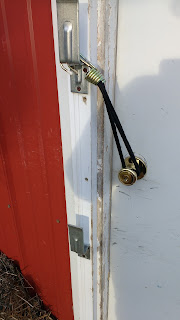 The door is broken and won't stay latched with even a slight breeze unless I do this. This was undone on ghost day. 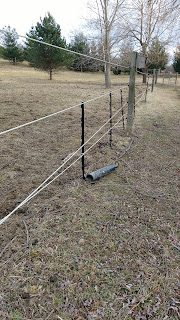 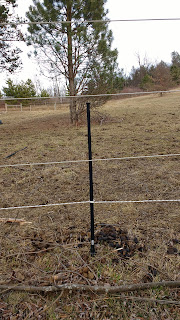 The black t-post is a temporary one until we put more stakes on the current fence posts. That bottom line is what we added. The top three are original.

Email ThisBlogThis!Share to TwitterShare to FacebookShare to Pinterest
Labels: barn shenanigans, escapees, my own barn, saffron, that damn donkey, The Goober Pony, video, we might have a ghost

In Which I'm Unnerved

So, I'm pretty sure someone is messing with my barn.
On Friday Gwyn got out. I thought it was an accident and she jumped out but I couldn't find her take off and landing spot. The ground was soft enough it would have been obvious. None of my fencing was broken, my one gate into the pasture was still locked (heavy duty carabiner). It was weird, but it wouldn't be the first time she's made an escape like that. It was just the first time where we live now and the first time at home rather than in a boarding situation. I closed off the front pasture (it needs to rest anyway) and put it to the back of my mind.
Quick barn description:
My barn has three stalls which all open to runs and that opens to the pasture. Those doors are dutch doors which latch independently. I keep them open 24/7 and the barn is available 24/7 as shelter. One stall is closed off because the dutch door is broken, one stall is held open with a bungee cord with carabiners, the other is held open with some old synthetic stirrup leathers because all of my bungee cords were deteriorating in the weather or weren't big enough. The human door to the barn is broken and needs replacing. I keep it shut with a bungee because if so much as a breeze blows on it it swings open. Anyway.
Now, today, I went to check on the property before picking up the kidlets from daycare because we've had some really strong winds. I pull around back to the barn and Gwyn is frantic because Saffron is LOCKED into her stall. Like, stall door latched. Both stall doors are unclipped and one is swinging in the wind. Both were undone only on the bottom half of the dutch door and not broken.
The door to the barn itself was not latched the way I leave it. It was wedged shut. And oddly, some expanding wood pellet shavings were in a water bucket as if someone thought they were grain. I asked Kaylee if she had done it and she said she didn't and I believe her (though Eric doesn't)
I am thoroughly freaked out. We now have a camera pointed from the house to the barn and Eric bought unlimited online storage so I'll be able to review footage whenever.
I gave one of our neighbors permission to pet give apples to the critters if we weren't around, and now I'm wondering if they're overstepping a significant boundary. We are also located across from the local high school and our place used to belong to a local horse trainer/riding instructor.

BAH. Not what I needed to be thinking about.

And now I'm lusting after some nice endurance stuff. I want to get a pair of Scoot Boots for Gwyn's fronts and a nice halter bridle (I see your reviews of the Two Horse Tack stuff!) and our tax return is burning a hole in my pocket that Eric would be upset with me if I spent it on horse stuff when I don't NEED it. Boooooo being responsible.

For the month of March I'm doing a squat challenge and that's going well. Probably in April I'll start up the Rider Fitness Challenge. I'm trying to find ways to fit fitness into my day because it's hard with the two kids. There are not enough waking hours in the day and I should be asleep now as it is.
Posted by Amy M at 9:50 PM No comments:

Email ThisBlogThis!Share to TwitterShare to FacebookShare to Pinterest
Labels: barn shenanigans, fitness, we might have a ghost
Newer Posts Older Posts Home
Subscribe to: Posts (Atom)