Work has been so busy that by the time I'm home I have no desire to sit in front of my computer and write a blog post. I barely have time to go to the barn, which I feel no small amount of guilt over.

I was supposed to have surgery in January but it got postponed because of the Covid surge and now isn't happening until late April. So suffice it to say, I'm also dealing with energy sapping health issues that I'm hoping the surgery will resolve even partially.

I rejoined Pony Club. Thanks to the object permanence issues that ADHD so lovingly bestows, I'm still getting hit by raw bits of grief over Jane from last summer. But it's also been kind of a push for me to decide to get involved in the adult side of Pony Club and there is an excellent local club that my barn owner was also going to join. So what the hell. I did it. Two lessons a month that I can opt into that if you break down the membership cost is a bloody reasonable rate. Plus I miss the socialization aspect. Plus plus I've discovered I really need to have something on the calendar that I can't just ignore. 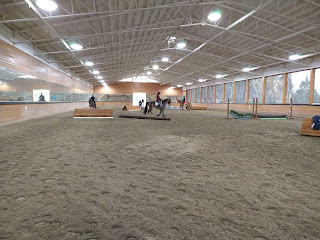 My first mounted meeting back. It was a flat lesson at a super nice facility that while I want to return to, don't want to drive back up that hill with a fully loaded trailer. I think I have some mild PTSD after destroying my truck's transmission. 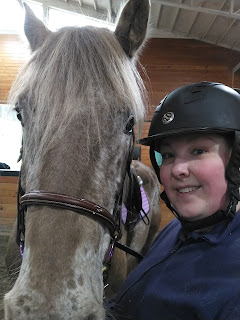 It unfortunately highlighted that Gwyn needs maintenance injections, or something, because the trainer for the day saw she was lame. I've since gotten two more people to confirm. She's fine on the lunge, but at the trot, under saddle, that left hind is plaguing us again. Injections it is. Until that appointment I'm keeping her work to a walk only under saddle and lunging to minimize stress. 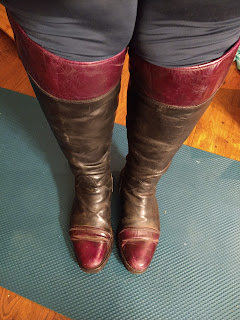 I found these amazing boots on facebook and thought I'd have to do some major repair to get them to fit but at most they're going to need a gusset at the top and that's it!  They're purple and black and super soft and already broken in. I'm in love. 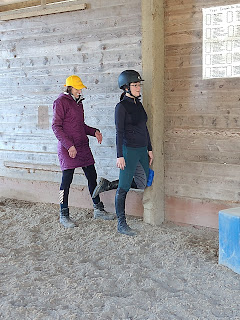 I keep meaning to talk about this but I've had a horse specific physical therapist since just after Don't Fence Me In last May 2021 when I couldn't finish the 30mile because my ankle kept giving out. She's been amazing and will do clinics at your barn. This is the second time she's been out to our barn for human biomechanic focused session. That's her with my barn owner showing her an exercise to do. 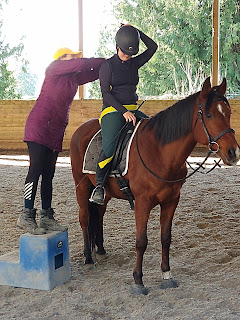 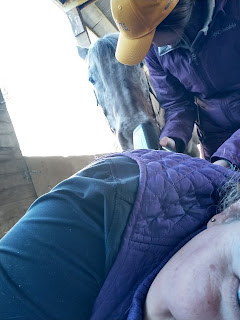 For my session we worked on relieving some tense points with a massage gun and Gwyn got jealous and curious and nosy. I use my massage gun on Gwyn and I guess she likes it because she was in my therapist's face trying to poke at the massage gun LOL 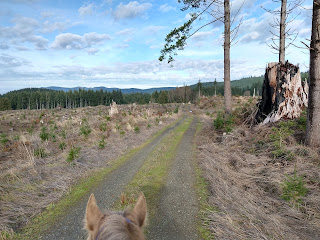 I've done a little bit of trail riding and I'm still trying to solve our booting. I dropped some serious cash on a set of 4 boots from a different company and will likely have to exchange for a smaller size as they were rotating like mad. 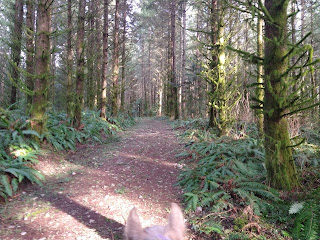 Gwyn liked having all four feet booted though. She moved much more comfortably on the trail. 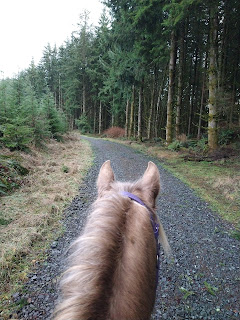 And I worked on learning these trails at Pilchuck Tree Farm. 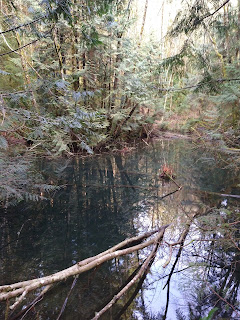 And sometimes we just hack around dressed to the nines for no other reason than it provides dopamine and serotonin and there's nothing wrong with that.
Posted by Amy M at 9:16 PM 2 comments: