I don't want Gwyn to languish for the next 30 weeks, however, so I want to have a plan in place to work toward so I keep her engaged and keep her skills present and sharp. I see no reason why I can't ground drive her. The big danger is me falling and bleeding internally. If Gwyn is an idiot, I can release the lines and let her get over herself while I stay safe.

Things I want to work on through the winter with Gwyn:

The second ride I used my saddle and the new jumps! Kaylee was in the arena too and she was my not so helpful jump crew, lol.

I had settled on riding the color ride, local to me on the Polly Ann trail October 10, the day after my birthday.

But I just made reservations for a campsite at Oak Leaf Run 2.5 hours away for that weekend, Friday to Sunday. I'll need to talk to Eric about it the morning, but oh man... oh boy.

I need to teach Gwyn to high line.
Posted by Amy M at 9:34 PM No comments:

I was nominated by Grace over at The Horseback Artist. Woohoo! Now, I am significantly delayed in writing this, but I blame being sick and also not ever going downstairs to use my computer. As it is, this is being written over several days.

The questions posed to me were this:Questions for my nominees:
1. Why do you blog?
I blog because I like having a written account of things that I do in my life. I use this blog in particular to track the progress I make riding Gwyn and share that progress with a social network of people I'm 'competing' against for a Distance Derby.

3. Which is your favorite blog post?
My last ride in Washington. It was an amazing day and one that I will remember and treasure forever.

4. Which bloggers have you met IRL?
If we include Livejournal, which I think it totally legitimate given that I crosspost things from here to there, I have met several people from the likely now defunct LJ equestrian community. Some of them have moved on from LJ and I've forgotten their usernames, but I'll just list 'em.  Lindsay, Jean, and Cheri.  Cheri was Florida (and who I got Gwyn from), Jean was Washington (and an excellent bodyworker!), and Lindsay is Michigan.

5. Describe your horse(s)/pet(s) using one image or gif. 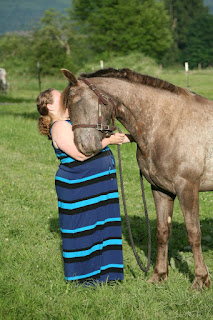 6. What is your riding discipline and why did you choose it?
I suppose right now I'm just a pleasure rider. I'm not actively competing in anything, or even training with anyone. I'm enjoying my dabbling in endurance. I feel it's something I can do on my own without relying on a professional in order to succeed. Broadly I ride english. Broadly. Ultimately I want to get back into eventing. I loved doing it as a kid and I'm working on meeting specific goals that will let me compete again.

7. What is the most expensive horse-related item you have ever bought?
Probably my Thorowgood saddle. I had a saddle fitter personalize the fit and it was purchased new. At just over $1000 it's the most expensive item. The most I have ever paid for a horsey -thing-, however, was the shipping to move Gwyn from Florida to Washington. That was a little over $2000. The move to Michigan was cheaper at $1400.

8. What is one tack/horse-related item on your wish list?
A safety vest! I need to lose weight first, for this, but it's one of the necessary items I'll need if I want to even school for cross country and 3 day eventing. I'm not sure which kind I want, likely tipperary, I'm not sure I want the air canister ones that inflate because knowing me I'd forget when I go to dismount and I'd inflate it every time.

9.  What is your favorite riding memory?
Riding in my first endurance ride in Spokane, WA. It was exactly a year ago, at this point, that I went to the Mount Spokane Endurance Ride and did the 15 mile trail ride Saturday and decided to do the LD on Sunday. It was an amazing experiene, even if I had my period for the ride, which was a major suck. But I completed! And Gwyn did it too and it was amazing! We were riding on the side of a mountain the whole time and the views were spectacular.

10. What is your scariest riding memory?
I was pregnant with Kaylee at the time and took Gwyn out on the pipeline trail that my barn at the time was on. It was a gorgeous winter day, the kind where everyone and their mom gets outside because it's a sunny day and a break from the rain. We were out alone, though there were people on the trail everywhere and Gwyn got overstimulated (my theory) and lost it. She bolted for home and was uncontrollable. I could steer, barely, and we topped out at 19 mph (I had my gps running) I had visions of us hitting muddy patches and her breaking a leg or of us crossing an upcoming road and just getting killed by a car.
I finally got her under control and slowed down, but not after flying by people on bikes, walkers and baby strollers, shouting that I had no control. We crossed the road safely, thank FSM, but then she spooked again at the top of a steep hill. I got off at that point and just lost it, yelling and crying at her. I sent her backwards and everytime she got 'up' I sent her backwards again. I kept yelling, "I AM SCARIER THAN ANYTHING ELSE OUT HERE."
I didn't ride alone while pregnant after that again. I would not get on unless there was someone else on the ground who knew I was riding. Ever since then I have major anxiety about even cantering in open areas. It takes a lot for me, though Gwyn has improved significantly and we haven't had a repeat, but it's stayed with me.
11. Share one of your riding goals.
I mentioned it above, but I want to get back into eventing.  I don't care about competition level, I just want to get back into it, even if I never go bigger than Beginner Novice. Just like I'm pretty content to stick doing LDs in endurance!
Posted by Amy M at 6:53 PM 1 comment: