I'm at T-32ish hours until launch westward. Today I started loading the trailer only to discover that four of my 7 to 8ish bales of hay were moldy.

I pretty much panicked. Thankfully one of the most genuinely nice people I've known immediately offered me some of her hay. I just about cried.

I pick Cheri up from the airport tomorrow. I'm hoping to squeeze in a visit to the Secretary of State for the trailer title so I can get it registered in Washington.
We also just got the dates and schedules for when the rental car is available and it will be the same day that the cars get picked up to be shipped and I'm just... wracking my brain trying to figure out HOW I'm going to get almost an hour and a half away to pick up a rental car, on Kaylee's last day of school.

It's going to likely be a hell of an Uber/Lyft bill.

I'm posting this again as an update now that I have reservations.  Eep!  So Bloggers, if I'm passing through, let me know and we can try and manage a lunch or dinner meetup!

Stop 1 May 30:
Winds Reach Farm in Iowa City, IA  None of the original places on my list got back to me so I had to make an alternate route
Humans in Clarion Hotel Highlander in Iowa City

Stop 4 June 2: Rugg's Outfitting in Superior, MT. Humans will be staying at a cabin on site.

Arrival in WA with time to watch animals settle, plus a day to watch them settle.

Not much riding has been going on. My pastures look fantastic right now so the animals are mostly happy, unless they're in my spring pasture and then Saffron has realized my solar charger isn't charging the fence and escapes multiple times a day. They're getting loved on still, and we're really getting the property ready for market. It looks FANTASTIC. 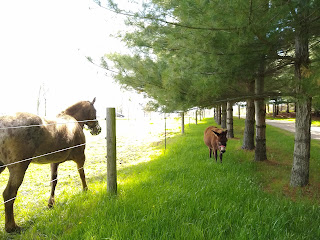 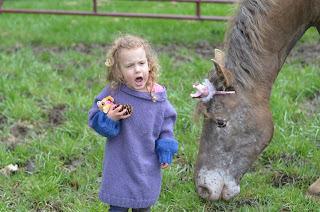 Hazel helped me groom Gwyn for her birthday photo shoot and then complained loudly when I wasn't finished quickly enough with the crown. 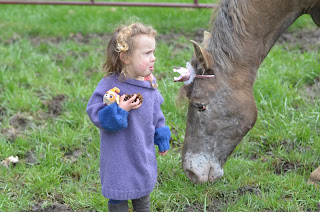 After a successful May the Fourth "Chasing el Chavo" 5k at the local hard cider mill, I jumped in with both feet for an early morning dressage schooling show at Grosse Point Equestrian. This is the same place I went at the end of February and since it was such a positive experience, I wanted to return one last time before moving. This will likely be my last show for Michigan so I can focus on getting the truck and trailer fixed up for the drive.

Kaylee also wanted to show so I got permission from the judge to do a leadline Intro A test with her on Gwyn. Did you know there is a LOT of continuous trotting especially in a long form dressage arena where you trot across the long diagonal? It's kind of hell on foot... Thank goodness for super amazing footing that didn't give too much under foot for me.

Kaylee took a lot of these photos for me. It was fun to see what she thought was worthwhile to capture. 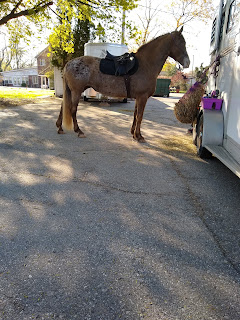 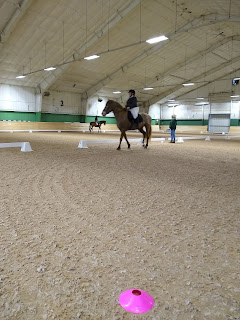 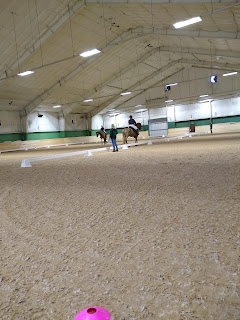 Trainer lady was very rude during the warm up. She treated me like I was a total novice. I did not appreciate it. I stayed out of her riders way and in fact just schooled some basic canter departs in the end of the dressage arena where I would be cantering anyway (to work out steering issues and instead had porpoising issues) and then moved to the warm up side.

I was the second rider and did Intro B. It went okay. I wish I had been in the bigger arena like before to warm up where I could do some really nice big circles to loosen her up and get some wiggles out without feeling like I had to prove myself to this stranger. Since I had cued for the canter, Gwyn assumed that corner circles REALLY MEANT CANTERING. She would do a little hop depart every time we were down at A. She porpoised in our 20m trot circles. I really wish I had tried to just get her super forward in warm up so that we could drop back down to a more sedate trot without thinking canter ever time I applied leg.

The big thing I'm grateful for is using this show to learn how I need to warm my horse up. Last time I didn't' bother to warm up with canter because we were only going to do walk trot.

Intro B: 60.625%, 2nd place!
My thoughts on B were that we definitely needed more warm up where I don't feel self conscious because then I'm not riding effectively. So that's a mental thing for me. Gwyn was trying to get contact and briefly achieves it. I ride porpoising very well (in fact my mom said that some spectators behind her had commented that I handled that little bit of near canter depart calmly and with poise, which makes me ridiculously pleased with myself)  My interview suit jacket totally works for a riding show coat for now. Bending was better one direction vs the other and in the expected way that I have left side of my body issues that translate under saddle. So things to work on. I'm not displeased and was honestly completely surprised to be handed a ribbon.


Intro C: Elimination due to... well, you'll see. At least it wasn't a canter steering issue?
In re-watched our exit from the arena I'm less thinking it was a behavioral thing on Gwyn's part. It kind of looks like she hit the far open end of the rail with her foot and kind of tripped her way out? Our canter, in her freaking good direction, was a counter canter with the lead she usually doesn't like.... 😝😝😐😐😐😑😑😑😆😆😆  But my big goal in doing this particular test at this particular show was not exiting during the canter so technically I succeeded? We didn't even manage to get a canter the second time around but it was already scoreless anyway.

Then it was time to just hang out in the sunshine until they started the Junior tests.

Let me tell you, I couldn't find Kaylee's paddock boots last night and basically had a minor panic attack since she was insisting she was going to wear her muck boots, a decidedly not heeled boot. Oh six year olds. Thankfully I found these fashion boots that would be good enough. For Kaylee I braided Gwyn's mane and forelock. It made time go by faster while we waited.

Gwyn was SUCH a good girl for Kaylee. And Kaylee was a trooper for such a long day. We had a bit of miscommunication where Kaylee thought that she'd then be doing the riding all by herself and just melted down when I told her that wasn't the case. She wants to be an independent rider SO badly, but can't quite do it with Gwyn yet. There will be lessons in Washington for sure. 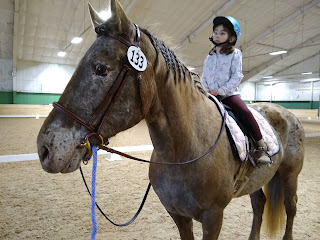 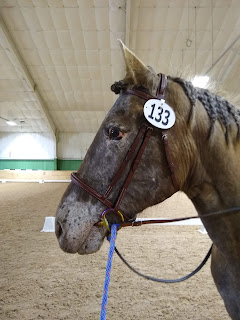 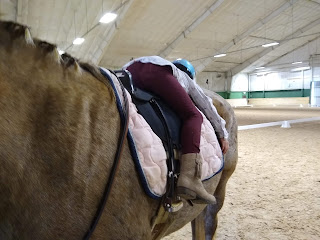 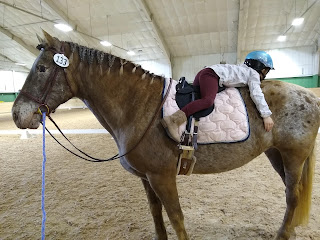 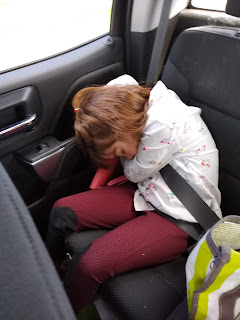 Things are getting real! My friend Cheri has purchased her flights to come to Michigan and drive with me out west. The dates are settled. It's now time to figure out where we're stopping each night.

The trip is about 2400 miles total and I'm dividing that over 5 days of about 470 miles each day give or take.


Or to Missoula MT and the Big Sky Horse Park

I've got a soft landing spot for both Gwyn and Saffron. I haven't found a place to board yet and I plan on putting that off until I'm in the area. For now I'm focusing on trimming this trip and preparing the house and property to be put on the market.

I've been struggling focusing on any one thing and I'm constantly fighting the urge to curl up every day and just watching how to draw videos from Pub Draw. Gwyn is  covered in mud and I need to clean my saddle because we're going to a dressage show again on Sunday! This time Kaylee is coming with me and we got permission from the judge to do a leadline intro A test with her. She's excited too.

And so this isn't all words and totally boring content... 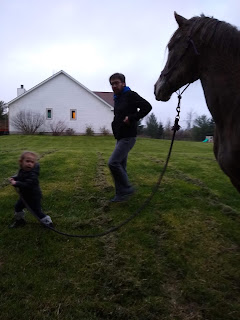 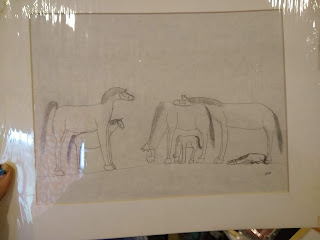 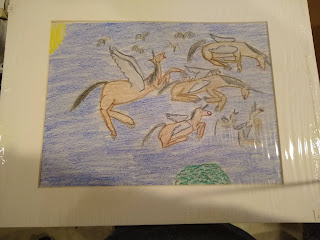