I had a complete and utter brain fart when it comes to training Gwyn. Thankfully things were not bad, though they could have been catastrophic.

When you introduce new things to horses you want to make sure you break it down into component pieces. As an example, you don't hook a horse up to a cart without making sure they're familiar with all of the little pieces (harness, something moving behind them, ground driving, pulling weight, etc)

In my excitement about having both snow and my skijoring harness, I figured I'd introduce Gwyn to weight.

I neglected to introduce her to something sliding across the snow when she moved. 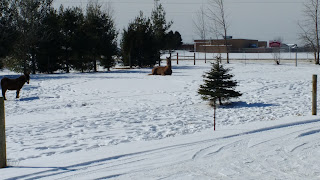 Taking a nap in the snow. This has all since melted. 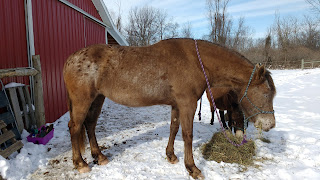 Looking good! We made it through winter fat and no ribs! Thank you LOTS of hay!

Anyway, I put the harness on her, I wasn't even planning to ground drive her, just lead her around the pasture with a slight amount of weight in Kaylee's sled and the sled hooked up to the lines of the harness.

We took maybe too steps and my mistake kicked me in the ass. She absolutely flipped out. And it's definitely my fault. She went flying up the hill, the sled flapping behind her, then down the hill and into the front pasture.

Saffron and I kind of looked at each other like... "Uh... maybe we should go after her..."

The small amount of weight I had used (my grooming box) was remarkably undumped, a testament to how quickly she bolted. I trudged through the snow, Saffron at my side, to find the sled in two pieces, and thankfully no longer hooked up to Gwyn. If I had attached it differently, it might not have broken the way it did.

I left the sled and approached Gwyn and apologized. She was snorty but calm. The harness was still on her. I led her over to the broken sled and let her sniff. I took the harness off and did what I should have done first. I put the harness in the sled and pulled it beside myself while leading Gwyn back to the barn.

She calmed down immediately, gave it a side eye, but didn't do much more to be scared.

To further reduce the damage, I piled hay on top of the sled and led her with the sled into the arena. She was eating off of it as we walked. I think the damage was reduced...

We walked around the arena for a while and then, to salvage some of the time I had, I did some ground work to get her focused on me in the 'scary' side of the arena. 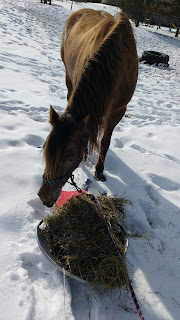 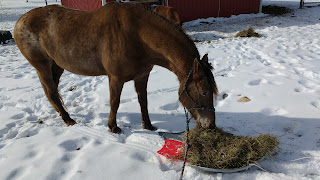 So, thankfully the nightmares that flashed through my head as I watched her race up the hill did not come to pass. It's salvageable.

And there are no more sleds for sale and the snow is gone. We'll work on dragging a 2x4 board instead. And we'll do it properly this time.

Danger! Our instructions are no substitute driving course! You will find just how to adjust what. These instructions apply to the exclusivity only for the original classic " PUR " - Line , who wants to have it even easier , so want more , abiding by the " PLUS " - execution.

Dear Customer/s
Some of this harness is now at first sight different than you are used to it. Conspicuous has this harness hardly buckles and loops , still can and must be set correctly. How to be a breastplate has, etc. should be known to you, I will not go into here at the point on. The how of adjusting, however, I would like to illustrate this:
The manufacturing material is an Air-Rope (hollow braid) of polyethylene with an enormous tear strength, which can be connected quickly and safely without knots. For entangling of the cable end as the end part is inserted about 20-30 cm from the outside in the pushed together, thereby expanding (schlauchige) interior of the cable. The rope braid now drawn together in the load, so the inserted end is held by the contact pressure.
All connections on dishes, head pieces and lines are more or less designed according to this principle. So if you want to change something, please see the corresponding compound carefully and you will succeed to extend the corresponding stripper or shorten. (Incidentally, if thereby should solve a final gluing, easy to turn back with a piece of tape.)
The connection points are, where necessary, provided with locking sleeves which prevent a displacement in the relaxed state.
To change the settings, push the locking sleeve over the insertion of time, readjust and tighten the sleeve again.
(page 2)
The line can like most Sieltec products (see previous page) in length be adjusted.
The longer, left leash secured knows both lines are also also for better verification white marks. To adjust the Cross Cap Simply beat one or more nodes in the on shortening linen. Do not worry, the knots are easily solved by use readily, but should always be removed! Attention, you can unintentionally brutal (Zufassen) with these lines as to a hard hand, please always give nice. Meanwhile, some joints are partially secured with sleeves, they are only pushing aside before the adjustment and take on again her place.
The strands are adaptable and to handle their mounting on any (Ortscheit) arbitrarily. They can be, e.g. As simply hung over the (Ortscheit) or fasten with safety shackles (To see in the clips below, product information/instructions)
The (Oberblattstrupfen) (the connections between comb and cover strands in pairs dishes) are connected through a race to the strands and are among the small waist belt. The (Verschnallen) omitted here, is at best to "Move" and the train line corrects itself. The Marathon Harness with panic shackles are of annular configuration, these loops you just by the pedestrian spectacle.
Upon delivery of the buggy harnesses with breeching we attach the carabiner of the rear harness because of the clarity of the suspension rings or another. This must necessarily be fixed when tension on the scissors! Only then can they fulfill their purpose and do no harm.
The lifting eyes can be adjusted in height: unfolding, pull out, reinsert, finish (See images below or in the product information/instructions)
END 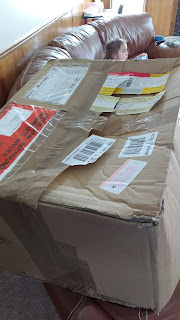 Package arrived severely banged up. I had a moment of "what did I order?!" when it arrived since I needed to sign for it. 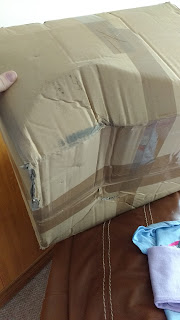 Thankfully the box being banged up had no impact on the actual product, due to its construction materials. 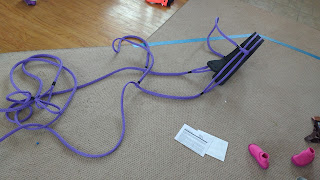 It's a simple breastcollar that I can use with my existing surcingle, bridle and driving lines for some simple harness work. The most we'll be doing is pulling things in the arena and pulling people around on a sled or skis in the snow. Skijoring!! They also make full harness sets in fun colors with this braided hollow rope. Adjustments appear easy and google translate helped me figure out how adjustments would work. I'm impressed with the quality of work. And it won't degrade from mildew or mold! 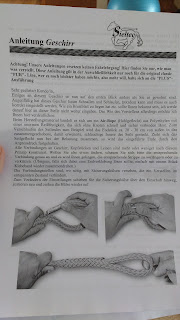 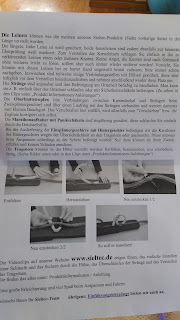