And here it is!

This has taken forever to get up, mainly because of photo editing and me waffling on whether I want to include every single rider who passed my fence and that would be... quite a lot.

So here's some of them, with names/countries/horses if I could make out their rider number. For the riders I had the most name recognition on (realizing that I did not have an order of go in front of me) and awareness that they were next, usually thanks to spectators, I tried to get video. That's going to be a different post, I think, as video editing for me takes a LONG time and just focus while on the computer and I don't have that presently.

And actually, this has been sitting in drafts for a year and a half now... Have the pictures I managed to get through and edit. Maybe I'll finish this one day...

A Tale of Two Judges, Puddles and a Tailbone

Last week I went out to the barn to ride and practice some of my dressage tests for the show this weekend. I want to make sure that I was passingly familiar with them. There was also a grid set up in the outdoor arena and it was so sunny and temptingly nice that after we'd gotten some solid flatwork in (Gwyn's canter is getting progressively stronger!) that we went to play with the very low grid.

It was all great until the very end when I decided "one more" for the video and we crashed and burned. I fell hard and it hurt SO much. My low back/tailbone was immediately on fire. I could barely bend over to buckle Hazel into her car seat.
Anything requiring suspension of my upper body without support from my arms has been impossible. I've been gimpy all this week, which is problematic since I move a LOT for my new job.

But thankfully all the walking I do at work helped start loosen up what the hell I did to aggravate my body. Plus constant advil/tylenol and liniment. By Friday I was feeling optimistic for the horse show. LOL.

So Friday rolls around and I'm feeling reasonably sure I won't reinjure myself if Gwyn decides to be an ass so I leave work a bit early, pack my things up at home, have dinner with the family, then drive out to the barn to load up. I'd already paid for overnight stalling and just didn't want to be rushed in the morning. Gwyn loaded right up and then it was 90 minutes south to Donida Farm.
I dropped her off, thankfully finding our assigned stall in the first barn I looked through with my phone flashlight. Got her set up with hay and water and headed back north to Cortney's. I got there around 11pm and was greeted enthusiastically by her dogs and pretty much crashed immediately in the guest bed. I got up when she did and it was nice to only have to get myself ready because all my stuff was at the show already. Cortney's mom came too and they left together to go pick up a third person. 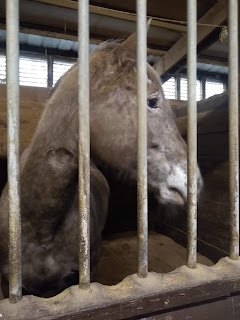 My first dressage test wasn't until 11am, which left me a lot of time to chill. I grabbed breakfast from the cookshack (they let me open a tab with a blank check!) and then headed out to watch Cortney and J ride their first tests.
While Reign is still a baby, she came out with a 'been there done that' sort of attitude. Nothing super phases her, which is good, since Cortney intends for her to be a husband horse! They did really well. 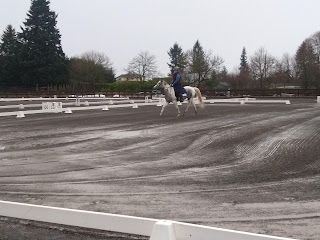 Rio is an 18 year old Arab gelding and this was his very first dressage show. He'd never been in a dressage court before and he did REALLY well when you take all that into account. 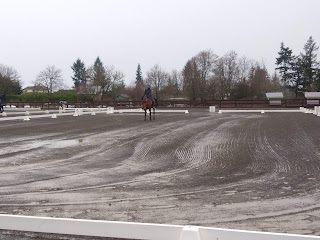 Once they finished, it was time to go back and get me ready to ride! 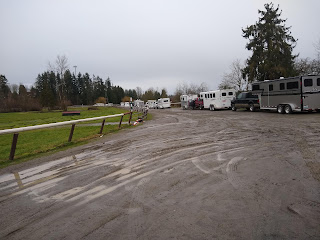 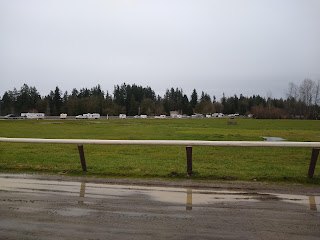 As I was walking her out to the warm up she was high like a kite and VERY light on her front end. I needed Cortney to hold her so I could mount up. After that the mere suggestion of walking was like a foreign language. My goal was to get her to relax and stretch. I tried incorporating the thing we'd been working on in lessons, like lots of walk/halt/back up transitions. Asking for a back definitely caused front end liftage and I abandoned that until she was a little less sensitive to the aids. 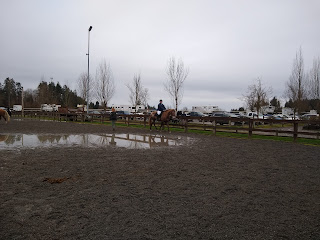 She was so sensitive, in fact, that we were half-passing every where. Leg pressure definitely was working and I had no spurs! 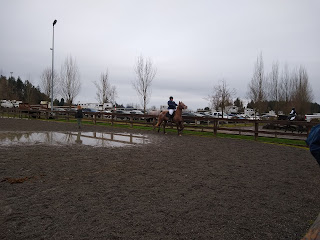 To my amazement, she immediately stretched down when we walked through the copious puddles. So that became my plan. Stay in the puddles and reward a relaxed frame and snorts. I did lots of small circles and figure 8s in the puddles and slowly, S L O W L Y her brain rebooted. 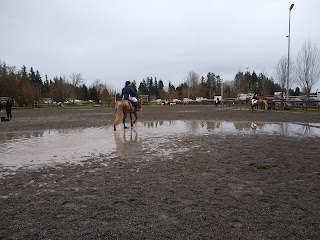 I didn't dare canter her since my low back kept catching when I would stay with her forward movement. The plan pretty much became don't canter in my test (Beg Nov B eventing test) and take the points hit just to have a controllable horse. My main goal, given the past couple of dressage tests I've done, was stay in the court 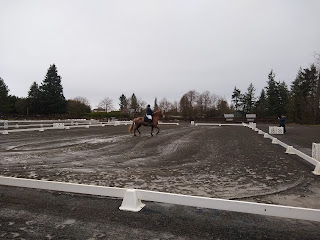 So then it was time. Gwyn actually felt pretty focused on me once we entered the arena. She was pretty forward and rather giraffey but we had good moments. Enough so that when the test called for our 20m canter circle, I cued for canter. And you guys... she cantered. And we completed a 20m circle without leaving the court.
We continued to have more good moments. Like when I remembered Jim's voice in my head and slowed my posting and breathing and her head dropped and her pace slowed, for just a couple steps. On our second canter circle she counter cantered the whole damn thing but actually did a whole circle again. As we started the stretchy free walk, I did get an error bell, apparently I did my canter circles wrong? I'm gonna need someone to chime in here because I don't understand the judge here. 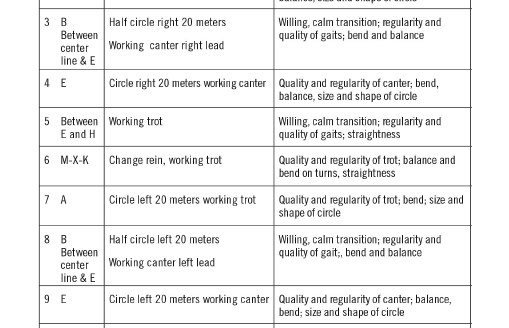 For step 3 and 4, then 8 and 9, I originally rode it like the diagram below. I picked up my canter between the center line and E, then did a full circle ending at E and going straight. The judge had me stop and do it the way I have it diagrammed on the right. I didn't argue in the test, I understood what she was asking me to do though I don't agree.

Can anyone weigh in on how the test reads? I really loved this judge and she was exceedingly kind about the whole thing. 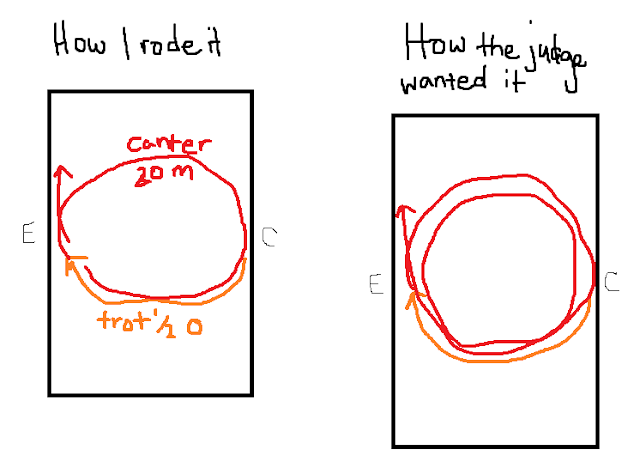 So I repeated the canter circle, getting the correct lead this time though Gwyn thought it was all bullshit so she did end up running through my outside aid on this go round. But... did not leave the arena.  I recovered and we finished and she was very proud. I thanked the judge profusely, who I think was just plain enjoying that it was a schooling show. She scored very generously. 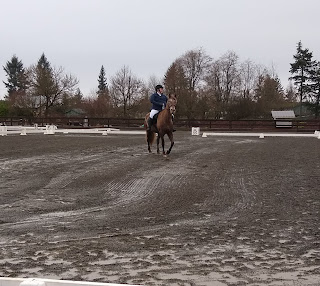 We all took a break for lunch, then it was time to get ready for USDF Intro B. This time Cortney, J and I were all basically riding back to back. This time, Gwyn latched herself onto Reign and was a hot mess unless we were next to Reign. Ugh... Gwyn... if we can't show with friends.... 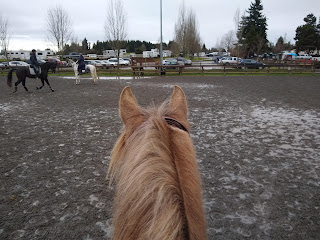 My Intro B test was a hot mess. Gwyn didn't want to do the initial halt/salute and given how light on her front end she was starting to get, I took what I could get and saluted when all four feet were stationary, despite her body being at a 45degree angle off the center line.

One of my trot circles also exhibited a total loss of outside aids but I didn't leave the court (notice a theme?) and we survived. That judge? Super SUPER stingy with points. I got a 49% and we'll thank our stars there's no video of that one. 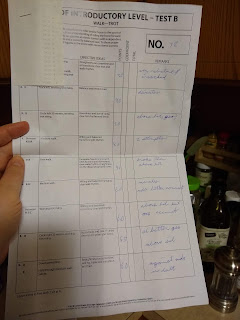 I had signed up for a third test, Intro C, and it wasn't for another 3 hours. And when I mounted for this second time I super wrenched my back and it took me forever to feel effective as a rider in that warm up. Gwyn still wasn't being polite for mounting. And Cortney and Company were leaving since J had to catch a plane THAT EVENING. I was tired and I couldn't face the idea of having to pack all my stuff up without help on top of trying to get on a horse that was losing her damn mind for a third time AND fully memorize the test (Trudy was reading for us). I just wanted to be home and snuggle with my kids. 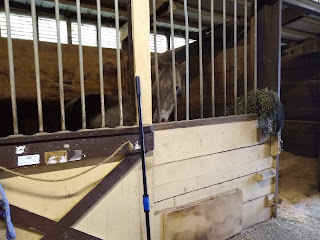 So I scratched. Instead of doing the one more, like the day I had fallen off, I decided to just call it there. We had a good day. Even if the only people listed after us were the scratches and no-shows, we accomplished the goal of staying in the dressage court. We even cantered and stayed in and that's a lesson I want to enforce with this mare.

I'd like to think it would have been a different show day if I wasn't protecting my back the whole time. But maybe it was a good day because I was being very careful in the warmup. Because it was raining the whole day (though miraculously never heavily during our ride times).

I got to go show with friends. I got to have a show Mom (I love Trudy). I got to have a horse who cantered without a ton of theatrics (all that work has been paying off!)  I had a horse who listened to my seat aids in the middle of the dressage test and I remembered all those lessons and applied them, even if we couldn't maintain the effect. There is improvement. And for that I am grateful. 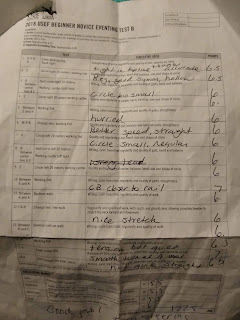