So after selling some of my old tack, I finally got myself a biothane set from Two Horse tack  (so many of the blogs I follow really liked theirs... it sold me)  I got purple, because it's me. I ordered a warmblood size in everything and sent measurements in for good measure.

Also a note, I was not asked to give this review. I paid for everything, nothing was received in expectation of a review.

I got the Quick Change Halter Bridle because I liked the versatility of it. I can ride with the included halter or use a rope halter (of which I'm learning how to make) or just use the halter as a weather proof turnout halter. I like the material. It's substantial and feels durable. It's not slippery and has some grip to it. The buckles are all quite nice and you can adjust it easily. My one complaint is that despite ordering a warmblood size there I am at the very last hole on the halter. It fits her nose just fine, but it barely goes around her jowl. I could go up another hole but it would be tighter than I prefer a halter fit to be.

Additionally, when I adjust the browband snap and halter the snap on browband fits right with the buckle of the halter.  Maybe I should have gone with custom to get a bit more wiggle room there, I dunno. I am pleased over all and it's just a minor thing that I incorrectly assumed would work with the sizing. If it continues to bother me I'll probably take advantage of their alterations and have them put a new, longer piece on it.

There is plenty of adjustability in the length and in that sense, this bridle fits beautifully. The bridle by itself is right in the middle when adjusted to her head. I have room to adjust it up if I use a hackamore, or down if I use a different bit than the baucher. I did provide those measurements and boy did they deliver. So based on that, I highly recommend just picking the custom option and working with them to get the perfect fit. 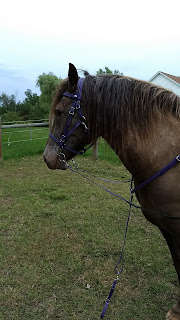 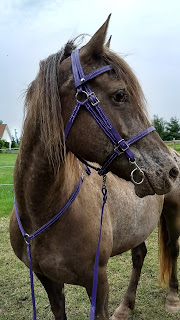 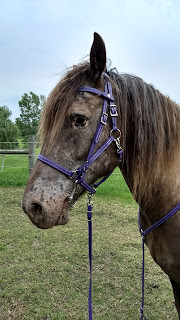 Halter is on the second hole in this picture and a tad tighter than I prefer. 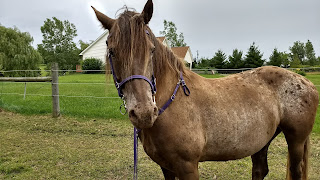 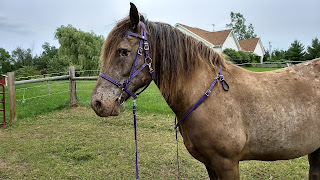 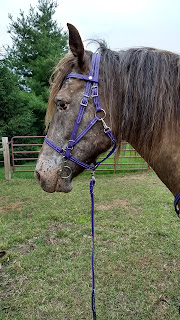 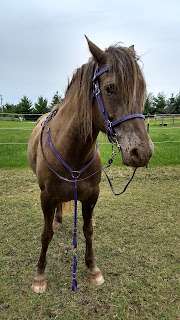 I also ordered an english breast collar because this tack set will be primarily used for endurance and trail riding and having places to clip things and keep a saddle in place is handy. In this case, warmblood size was HUGE!!!!!!  LOL  Guess Gwyn has a big noggin. I also ordered a girth loop because my girth does not have a d ring to put a clip.  In order to make this fit with the girth loop I'm going to need to punch a bunch of holes, but even so, the center piece was incredibly long. I added scissor snaps to the ends that attach to the saddle but they were not included so I'll be contacting them for that. Not a big deal, but I did check my order and it was listed as an option I picked. Either way, I need to fiddle with the fit a bit more before I'm satisfied completely. 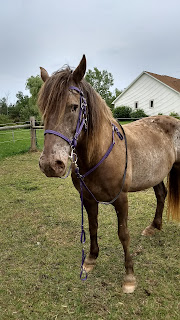 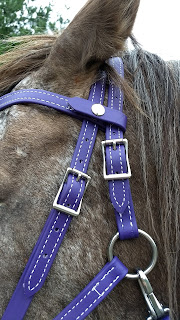 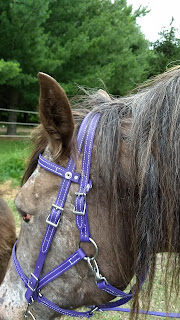 How the bridle unsnaps from the halter. 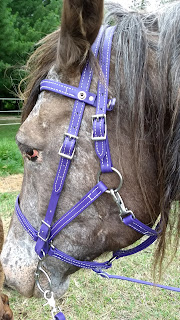 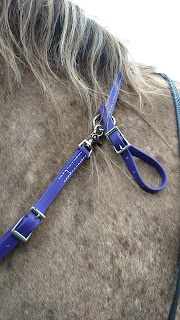 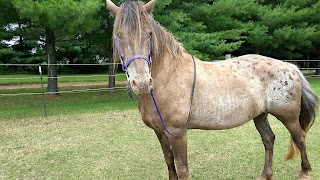 And to top it all off, I got matching reins! I upgraded to the scissor snaps, 10 ft length and black rubber grip. I like the weight and length of them, especially for trail riding. I might order a second girth loop to act as a rein keeper for when she's drinking or eating on the trail so I don't lose my reins. 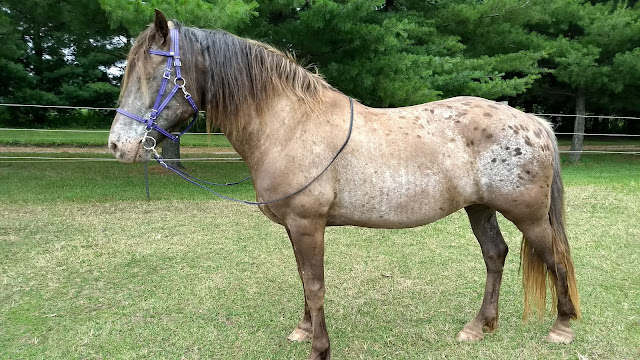 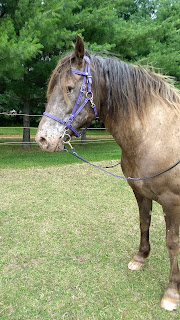 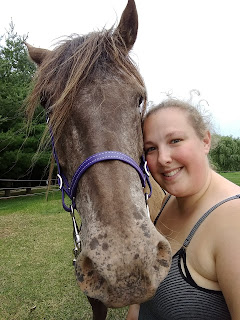 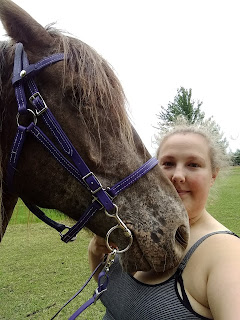 Kaylee points out that with how the tree is positioned behind me, it looks like I have a crown! She is incredibly observant.  Also, check out that mare-face. LOL

I've mentioned before that we live in the heart of horse and hunt country, or at the very least, on the outskirts of the heart. With that being said, when I saw that I hadn't missed the schooling days yet this year I knew I was going to go. Last year I was still coming back after pregnancy and worked toward this goal by getting a protective body vest, now a requirement (It wasn't the last time I did anything competitive or schooling, if that tells you how long it's been.... >10 years) I had a feeling Gwyn would do well, the pieces just hadn't fallen into place yet to make it a possibility. But today, they fit together perfectly.

Hunter's Run Farm is a 10 minute trailer drive (5 minute car ride, lol) from home. I'm not kidding. It is SO close. I contacted the woman who runs the facility and she got me in touch with an instructor who could coach me, as you can't school without a coach. So I also got my first lesson since leaving Washington. It was basic stuff, giving Gwyn a good first experience with a course and connecting jumps together that are a distance apart. We school on the tiny jumps, just the starter stuff with one or two beginner novice thrown in if I felt she was game. Gwyn did amazingly. She was brave and bold, just like I knew she would be.

And more importantly, she started to figure out that listening to me meant more fun jumps.

At the start she was full of energy and jigging. She knew something was up, but not exactly what. The farm was quiet when I arrived, I was the only one there at the time except for a boarder who was turning out a few horses and helped me find where to pay and drop off my liability release.

My coach for the day, Holly, showed up right on time and she walked with me up into the course, to the Upper Water. 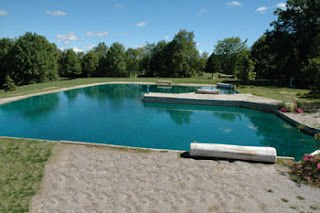 The upper water. It WAS this blue, thank the pond maintenance companies around here. There were tadpoles GALORE and it was nice and shallow and clear with a firm sand bottom. Gwyn spooked immediately at the color (more of a snort and a jump in place) and hesitated walking in immediately but with some leg splashed on in and once she was in she was fine. We walked all through the water and then out the tiny bank (the small step on the right).

Then Holly had me trot her around and right back into the water the same way (so doing a big circle, indicated below by the teal). We hit the water and broke to a walk, up and out the bank. Trot again, reapproach and this time she maintained her nice working trot straight to the step and out again. LOTS of pats!

After she did so well with the circles, we linked in a starter log. Holly had me let Gwyn sniff it and laughed when Gwyn plonked her nose on the jump. She said the horses usually don't have an issue if they're willing to touch it THAT thoroughly.  Good girl, Gwyn. :D My goal in combining the two questions was steady rhythm and momentum. Gwyn jumped the log and trotted straight to the water and easily up the step! So we moved onward!  (Going down the step was later, and Gwyn didn't even hesitate having the bank down into water) 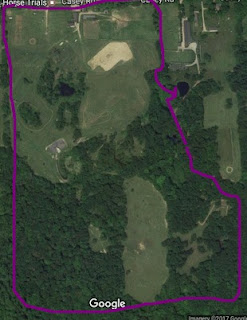 Google maps view of the whole property outlined in the purple. It was quite massive and very nice! No indoor, but the variety of jumps and varied terrain makes it rare for Michigan. 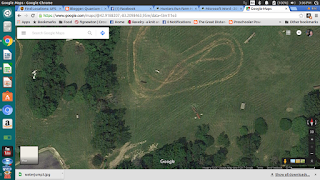 There was a small bank in the trees on this one and two other starter fences that I did. We schooled here last, but then started here putting them all together into a mini course. Again, Gwyn was a rockstar.

We moved up into the mini meadow. There were a couple of jumps and one bench starter jump. There was a lincoln log jump on our way that Gwyn took without hesitation. I had to loop around the meadow to approach the bench the right way. Then, it was on to the BIG meadow. It looks all flat but the terrain was very rolling hills. That bank complex had a total of at least 30-40 ft drop from bottom of the picture to the top.

Zoomed all the way in on google maps I couldn't fit the entire meadow into one screen shot. So where the double arrows are was the ditch. We walked up, and apparently Gwyn was looking at remnant jumps in the woods because she was startled by the ditch, but then calmly walked over it. It was highly amusing. There was a small beginner novice jump next to the ditch so Holly had me link the jump in the upper part of the picture and choose the bg nov or the starter, I chose the beginner novice. Then we cantered a bit and down to a trot to approach the other starter jump in the field (in the next picture).  There was also a red roll top beginner novice that she said would be fine to school if we wanted. I chose to jump that when we did our course. 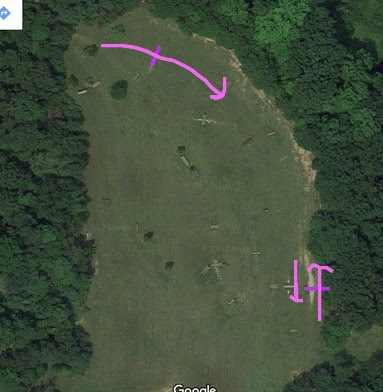 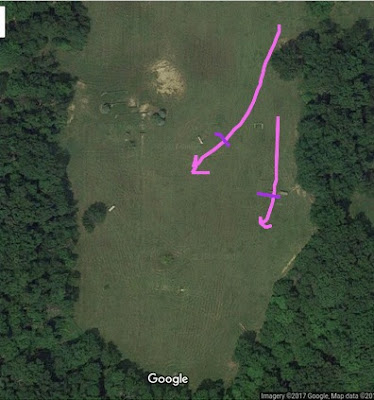 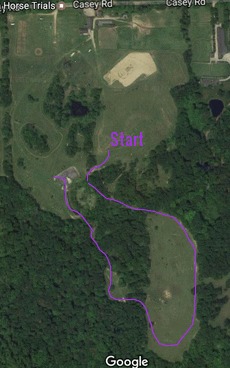 So then this was the course that I did all together. In the large meadow Gwyn definitely put on the gas and cantered in between each element, slowing to a trot for the approach. By the time we got to our last jump, the simple lincoln log, she just did a big trot over it and didn't bother to jump.  She was tired and a piddly starter jump wasn't worth the effort anymore, apparently.

We called it there and walked back to the trailer parking. I liked Holly, she was friendly and totally down for working with a 'has been a while' kind of rider. I can trailer into Hunter's Run for $15 to do lessons with her at $40 for an hour. It's so close that I think it's worth it, especially since they have the facilities and so far she seems knowledgeable.

I'm planning on doing the Hunter Pace in two weeks, then maybe schooling again, or just scheduling a lesson. In August there's an Eventing Derby that I'm DEFINITELY going to do! Probably just Starter, to keep it low key. And in the mean time, I'll work on our conditioning (I'm doing another squat challenge this month) so that we're not petering out. Then in September it's Metropark Express endurance ride and I want to do the LD, and October is horse event central. I have something nearly every weekend between the Hunter Pace, Hunt Trials and Oak Leaf Run Endurance Ride. Maybe a dressage show if I can get over the fact that I can't show out of my trailer and have to pay a stabling fee.  Grrr.

I have been itching to ride. After Brighton my attention when at home turned to getting our garden beds in order. Any outside time was spent working on that (and BOY was it a huge project, but it's finished!) But with those finished and knowing I wouldn't have work, I felt it was reasonable to take a day and get off property to ride. If we could get chores done the first part of the weekend, riding would be reasonable.