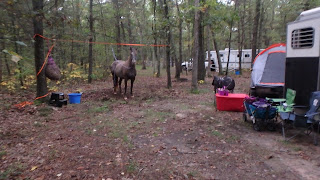 Our camp. We picked it out in the dark since it was first come first served. The truck tent went up well. Gwyn was perfect on the hi line. She adapted quite well for only being on it two or three times before. And while we had horse neighbors, she was effectively solo.  Good pony!

My alarm went off and I snuck out of the tent to go figure out when the LDs were leaving. I had about an hour (the 50s were leaving when I asked) so I signed in, paid and went to tack up since Mary (the ride vet) said I could vet in tacked up. 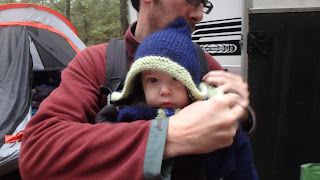 When I got back Eric and Hazel were getting up so I helped get her cozy in the carrier that Eric prefers.
Read more »
Posted by Amy M at 6:07 PM No comments:

Am I missing anything?

Alas, I didn't run my GPS so this day won't count for Distance Derby mileage. It was still a great day! I entered into two classes, a trail flat class where you follow a course but don't jump and then a baby jump course.  It had some of the permanent obstacles you see in the photos and also some itty bitty stadium jumps next to larger obstacles. Everything here was built to mimic what would be found out while hunting.

Gwyn did pretty well. She doesn't like to turn left, which I'm beginning to suspect is due in part to the damage to her eye prior to the snakebite. I think we can work on it, but until then, turning left, especially at speeds faster than a walk, are an issue.  Thankfully I was here to have fun so taking wide right turns to then approach a jump with a hard left approach was fine to me.  And Gwyn was super brave over the fences. She only ran out on one (from a left bend) and circled around and went over after that. I think she prefers the solid fences to the pole ones. Those she can just push through.

I also tried to hold off on this post because there was a photographer there that day. They haven't been posted yet!!!  So I'm posting this now and I'll do a follow up with the pro shots of me actually riding.

It was a beautiful day.

Kaylee also entered in a class! Her first horse show!  We dressed Gwyn up as a unicorn and really made an impression. Again, no photos since Eric was on Hazel duty but I'm waiting on that photographer.
Read more »
Posted by Amy M at 7:12 PM No comments: