Vet Claire came out Friday morning to do another status check on Gwyn. Since it was an early morning appointment, Gwyn still had her breakfast hay and looked relatively confused to see me. Though she's definitely recognizing the vet's pickup truck lol.
Unfortunately, she's still flexing positive on the hind leg which means still not cleared for riding. However, Claire thinks it's more a weakness issue at this point rather than a pain issue so we have some Physical Therapy to add in to our walking and trotting. Right now we're at 15 min walking, 10 minutes of trotting, with the addition of this set up of cavaletti (one of my big steps, or 3 3/4 of my literal feet) 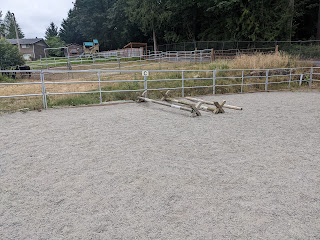 The goal is to ask Gwyn to come in at a slower trot to encourage her to lift and use her back. She fatigued after about 3-4 tries over the double set so that's the stop point, where I then just ask her to open up the trot and stretch down, no poles. Rearrange for the other direction. 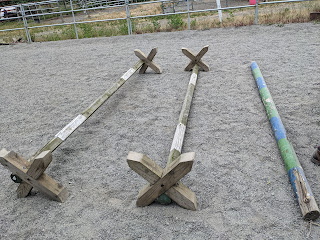 I made sure to describe what I've been working on with Chriss in our lessons which Claire was enthusiastic about the game plan, especially with what we've been working on with the long lining. I'm also clear to do in hand lateral work to really ask her to step under herself and weight bear with the hind. Anything to encourage her to really sit back on her haunches and develop those muscles. 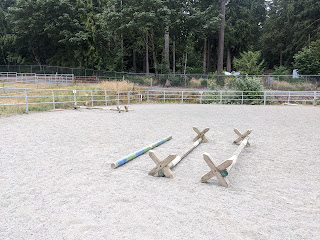 She is not yet clear for turnout in the bigger grass pasture yet, so alas for my air fern, she remains in the smaller paddocks. It's probably better for her weight anyway. But I AM clear to hand walk her on trails! That's exciting news. 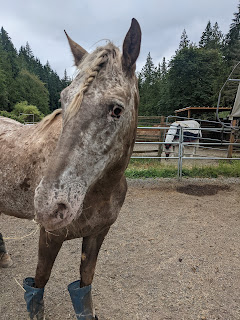 I'm discouraged that recovery isn't to the point that basic riding is okay. However, I do see the benefit of what I've been working on. Claire has pointed out that when we do get back to a riding point, Gwyn will be improved from where we left off because we're focusing on strength building basics. 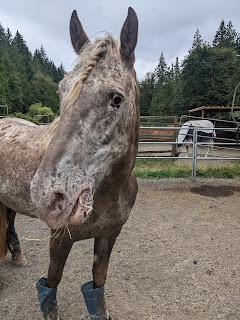 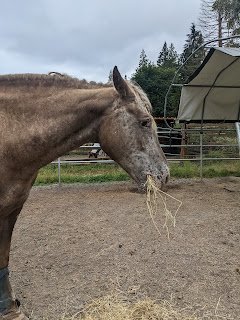 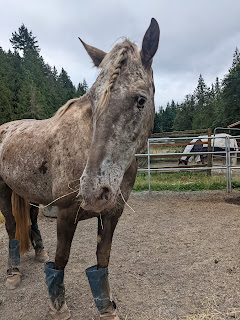 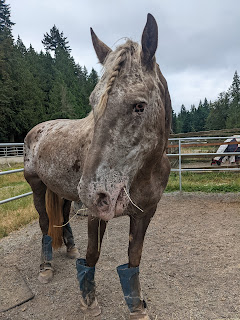 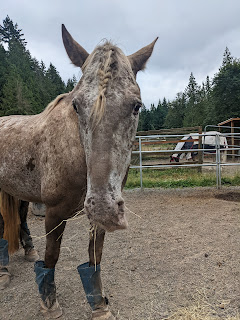 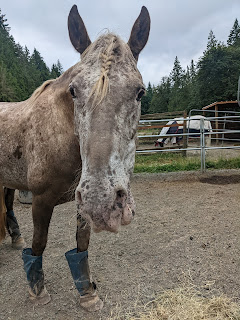 Saw a tiktok about braiding for long manes and tried it out to see. 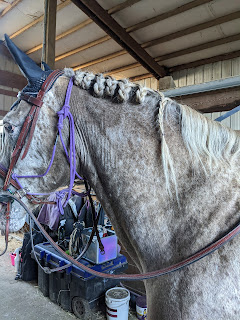 It's been hard to write about handwalking. Because that's pretty much all I've been doing. About a month ago we had a vet check and got clearance to add in 5 min and then 10 min of trotting, so that's been nice, though Gwyn definitely thought that if we were trotting, then we were allowed airs above ground, which is NOT conducive to healing.

After her initial ultrasound where we saw the strain, her left hind swelled up and I spent each day going to the barn to change her standing wraps and walk her a bit. 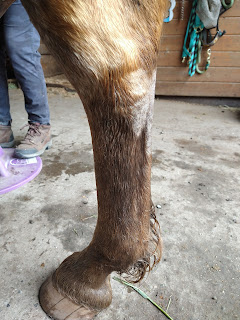 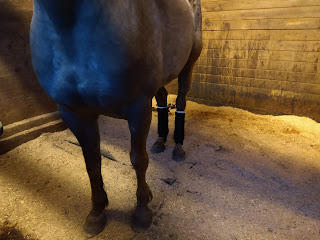 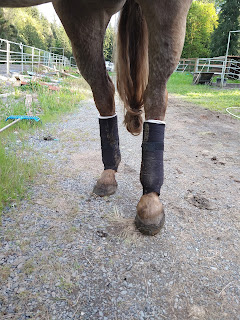 I guess it had been a good thing I'd recently attended the unmounted Pony Club meeting about how to do the various wraps. On the advice of some old acquaintances from the LJ Equestrian days, I bought some ceramic wraps that are part saratoga bandage. Once the swelling went away though, I abandoned bandaging, even for our walks. It seemed to add too much heat and I wanted to keep her legs cooler. I did add in some cold hosing if there seemed to be any puffiness. 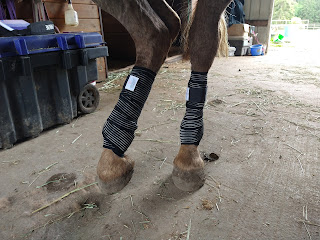 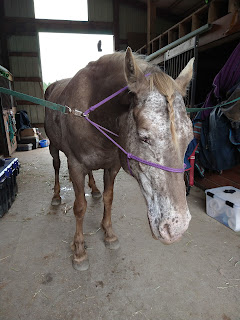 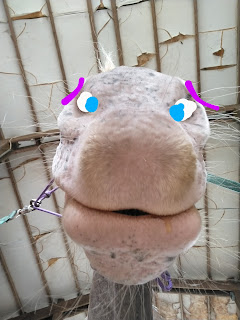 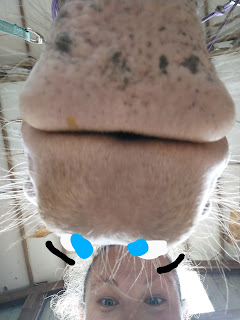 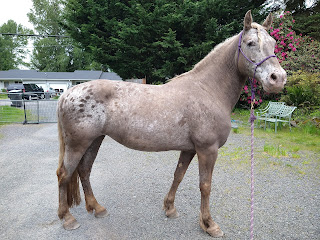 She's been looking pretty good overall, though I know that she's bored out of her mind. I tried getting her a hay ball but she doesn't want to try and puzzle the hay out of the holes so it just sits in her stall. 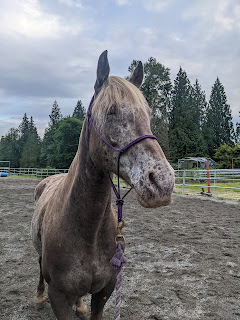 I did add in some long lining to try and mix things up for her brain. More on that. 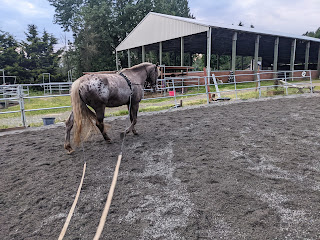 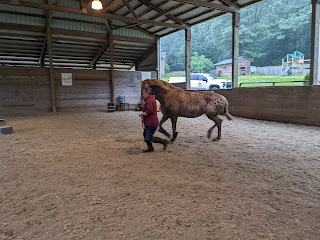 Super spicy for the vet recheck. At which point Vet Claire went, "I think you're good to add in trotting." Gwyn responded really well to the PRP injections and those may be our go-to type for annual maintenance since she did so well. 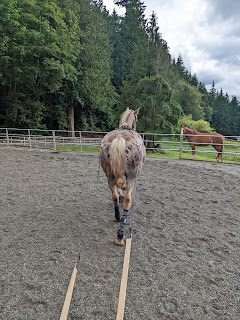 More long lining and working to prevent her from turning too tightly, especially at the trot. 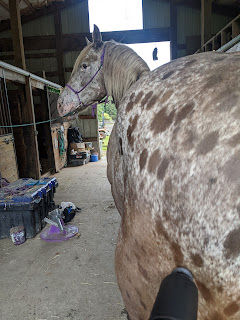 Gwyn gets massages from me while Corrie trims her feet. 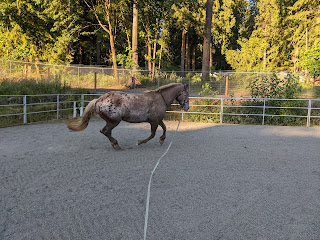 And definitely feeling TOO GOOD during this 5 minute trot session one evening. 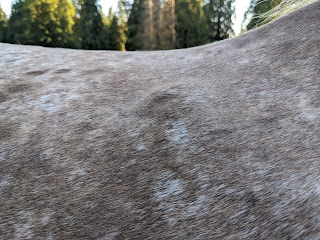 A giant honking bug bite that would have prevented me from riding if we were even allowed. It was so swollen and right under where a saddle would be. I chose not to use a surcingle because of it and just lunged that evening. 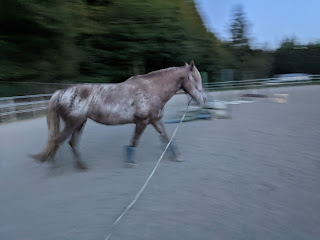 And then just not bothering to remove her fly leggings while lunging because I was having a hard time just feeling engaged enough to get to the barn. 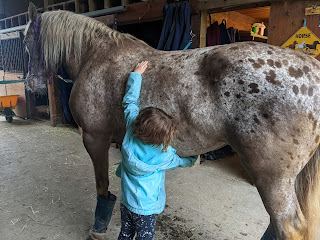 Hazel came with me this day and helped me groom and fuss over Gwyn. We all played in the indoor (it was a bit rainy) and Gwyn was very polite on the line and we even played with the giant ball together. 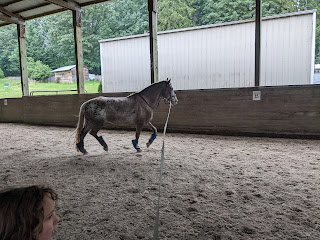 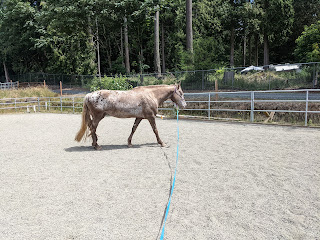 This was a super hot day, which apparently makes for polite ponies who do not try to buck or canter when asked to trot.
All that to say, we finally got Chriss back out for lessons and I hopped on that train super fast. Chriss has great groundwork advice and we've made some good progress with her prior to the diagnosis. Work is low key enough that it would fit into the handwalking and minimal trotting prescription from the vet.

We started with walking over some low poles at the walk in hand. Chriss' big rule is that the horse must not push on your space.  So in the case of walking over the poles, straightness is key, but also impulsion in the hind end to keep her from swing her hips out and pushing in with her shoulder. As I'm walking I need to be mindful of where she's looking and preparing to correct the push, which gets more subtle the more we work, but I'm also getting better at feeling it the more we work.

It was harder to do going to the right, which made sense to me because that's usually where I struggle when riding to have her really filling my outside rein, she likes to collapse to the inside. The same was happening in hand. It took a lot of effort and work to get her thinking straight and maintain control of her hips and shoulder.

From there we moved on to long lining. Again the goal was using the long lines to encourage her to bend and really step under herself with her inside hind leg. I found feathering the inside 'rein' while using the outside line wiggle to encourage forward so her outside hind couldn't swing to the outside to have amazing results. There was a balancing act and I was starting to get a good feel of asking for the forward would require immediate reminder to ask her nose to poke in just the slightest. I need to keep shoulder fore in my head. We even worked at a trot and I'm pretty sure I got her working in the best trot ever. She was practically floating across the ground, working evenly and through her back and hind.

AHHH! This lesson really upped my game with the long lining and I'm excited again about our 'hand walking' because now it's things we can work on to keep both our brains engaged.

Vet recheck friday, fingers crossed we get approval to add more work back in.