The last PNW ride for now


I had the best last hurrah ride with Cortney and Blaine today. We got a later start than we planned but it ended up working out anyway. Cortney picked Blaine and I up at Shadows. Gwyn loaded with minimal issues, and honestly rather quickly considering she hadn't been off property since August. We used a 3 horse slant this time, instead of the usual 4 horse stock from her mom. Gwyn went in front. (3 horse slant, check! On the wishlist!)

Cosmo hopped up beside her, ever the chill dude and they settled down to their remaining breakfast hay. Blaine also brought her golden retriever, Murphy. 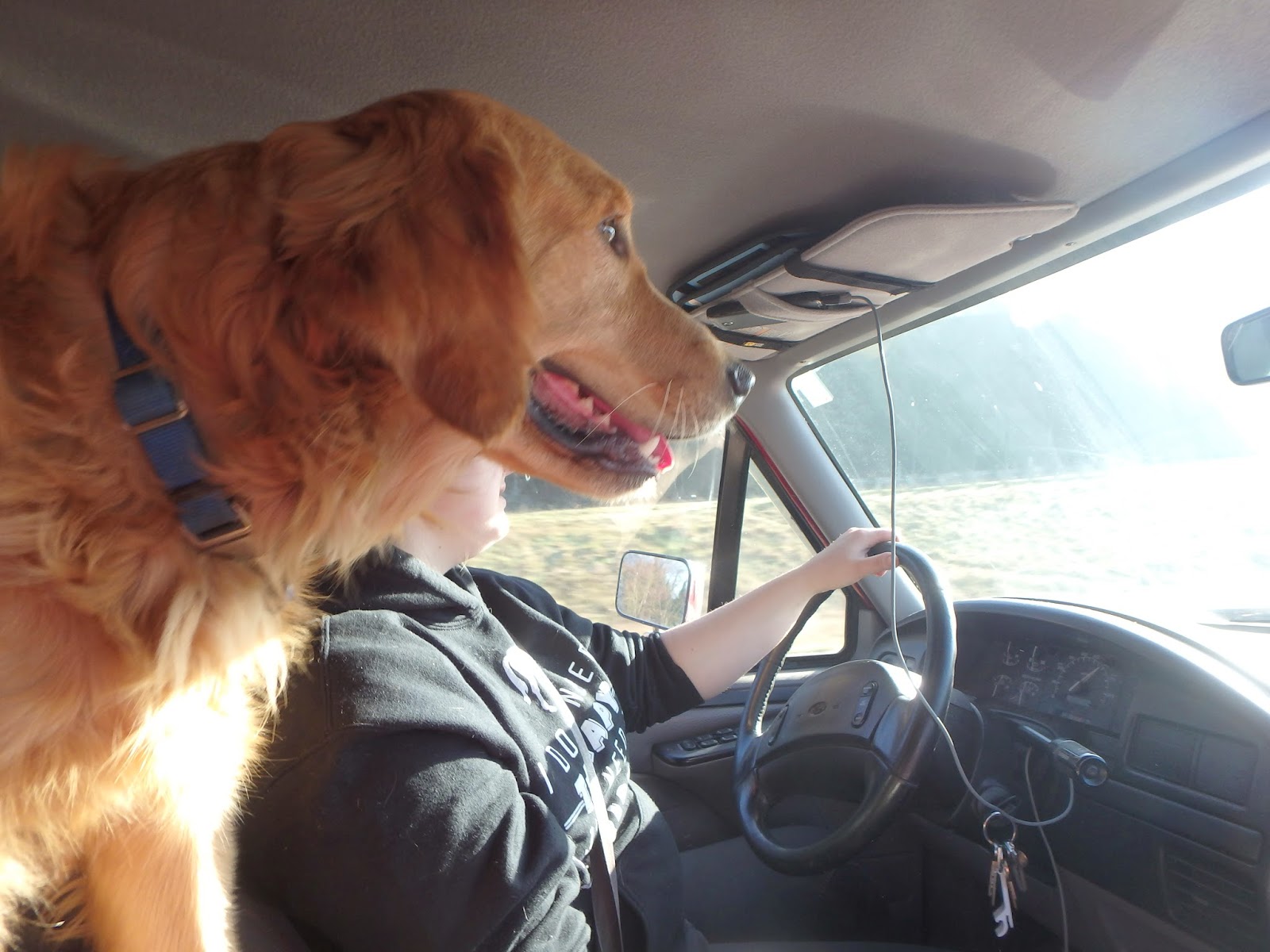 Murphy is excited for adventures.

It was really cute, when we arrived at Cortney's house in Snoqualmie, Murphy saw Cortney's dogs and got SUPER excited. Then he got to play zoomy zoomy with two cattle dogs, Minnie and Mandy. They loved each other.

Gwyn unloaded explosively. She snapped her trailer tie (it was nylon) and just went backwards in a panic. We reloaded her and made her stand in the trailer without closing it, then had her back up. She still went too quickly and banged her head. Dang. However, the dogs were barking and racing around and Splendid and Amira were raising a ruckus too. 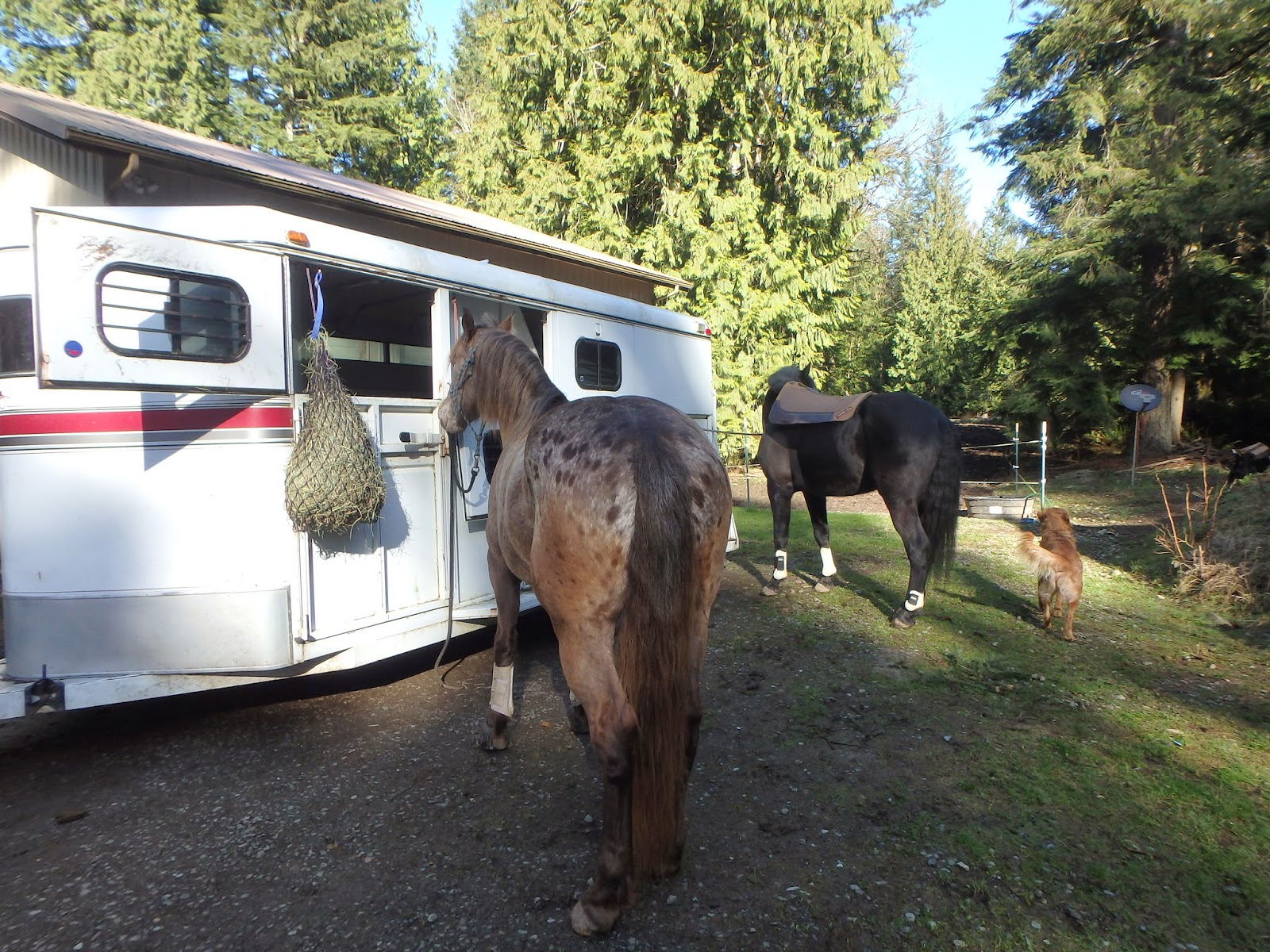 Getting tacked up at Cortney's house.

Many many more photos! Click below!
Read more »
Posted by Amy M at 11:58 PM No comments:

I didn't run the GPS because usually these clinics aren't so much distance riding as focusing on small issues and working through them. So while I did ride, it wasn't very far.

Tonight we started off with groundwork. Our first task was to send our horse back to the end of the lead rope and then slowly walk to their rump without them turning to face us. Gwyn watched me the whole time but we did pretty good. The point of that exercise was to not send any pressure to the horse and keep them standing still with body language and also to see at what point the horse became uncomfortable. Gwyn is such a noodle that she just twisted her head to keep an eye on me.

Then we practiced moving one foot only with pressure at a distance. Gwyn is fickle, much to Dani's amusement. If you get too close, she ignores you until you really apply a lot of pressure and then she over reacts, rather than just moving a single foot. Instead, you have to stand far away, apply the pressure and then back up as soon as she shifts her weight.

Then we switched horses. That was hilarious. I worked with two of the tiny quarter horses that come with the married couple. The husband is a retired Boeing engineer and his wife is a horse lover. He's just learning and it's cute seeing them do this together. The husband honestly has no clue and he has such an engineer mind it's sometimes hard to show him how to speak to the horse. But his little black mare is very tolerant, if stubborn and definitely has his number. But he's getting lessons in addition to the clinic nights so he's in good hands. Their two horses were really sensitive, to the point where I had to just stroke the bay mare because she kept anticipating the cue. But we got it figured out.

Then it was time to get on our horses!

We worked on more lateral movement, which is a weakness of Gwyn's. Figuring out lateral movement has been the reason why I go to these clinics. Gwyn will now turn on haunches quite lightly because of the clinics and she has more response to leg pressure now than she did. Tonight was another LIGHTBULB!!!! moment!

Sidepass is our nemesis. We try front over, hind over to zig zag in the sidepass and she just gets frustrated moving her haunches. We try just asking for a sidepass and she'll back up, or go forward and just frustrate herself. I think she's trying and knows it's not the right answer and just gets frustrated. If I work on lateral movement with her I have to give her forward motion breaks or she just gets crazy worked up and then nothing gets accomplished.

So I tried shifting my own weight. Just enough that one butt cheek was lighter than the other. Then I asked for the side pass (while we were facing one of the arena walls). Suddenly, a step to the side! Not backing up. We went down half the length of the long side and by the end she was moving just off the shift in my seat!  I tried the other direction and got some really nice responses!  I was SO PROUD.

She got lots of scritches and verbal praise and I let her have a forward break and she walked around, ears forward in this swinging working walk. I think she knew she did well.  This was near the end of the 2 hour clinic and by that time, Jordan had brought Kaylee down into the arena. Kaylee wanted to ride, so she was handed up and we walked double around the arena.  I'm planning to ride tomorrow, so I'll revisit the sidepass and see if the lesson sunk in. I'm SO EXCITED that we bridged the communication gap. 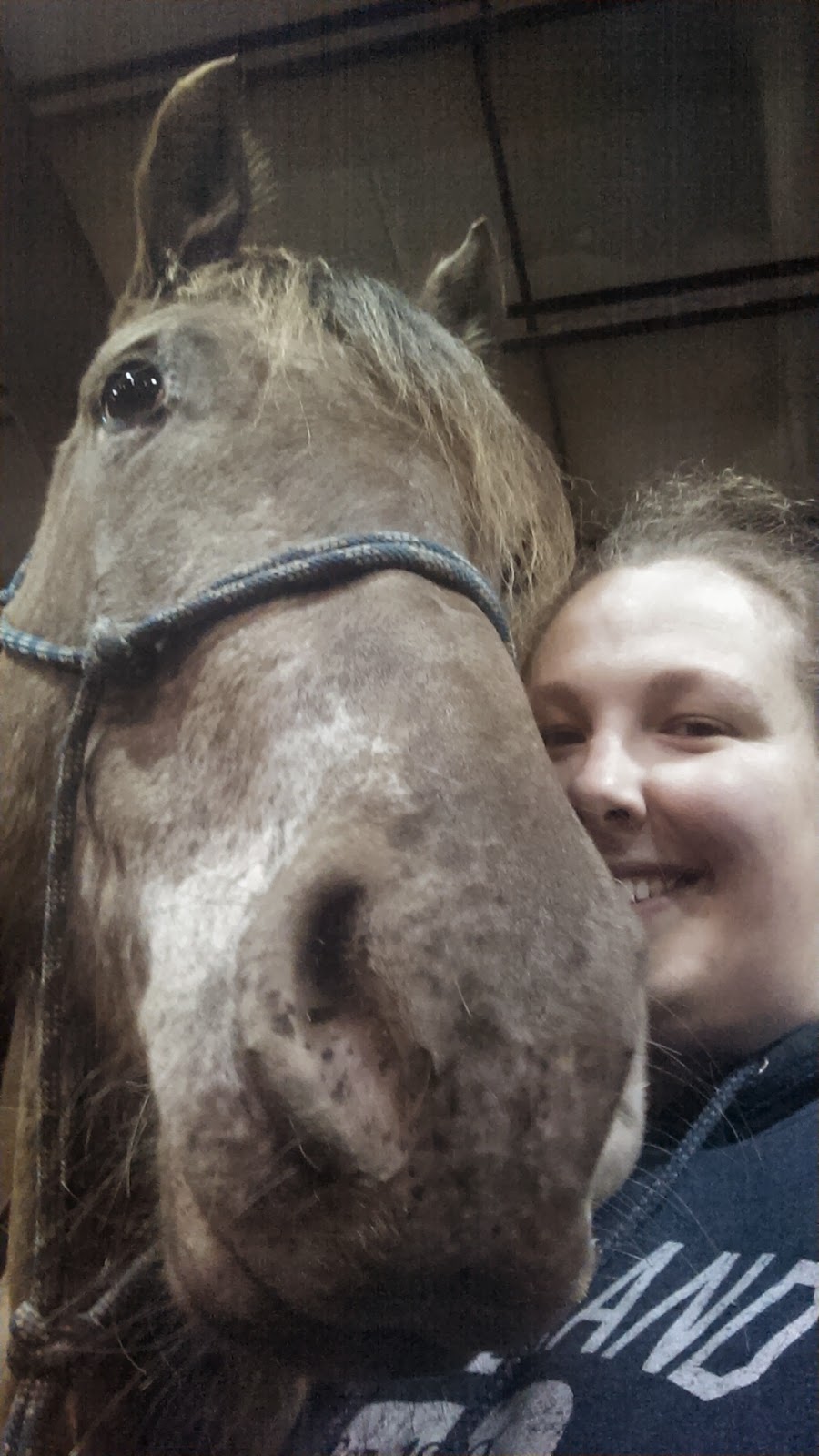 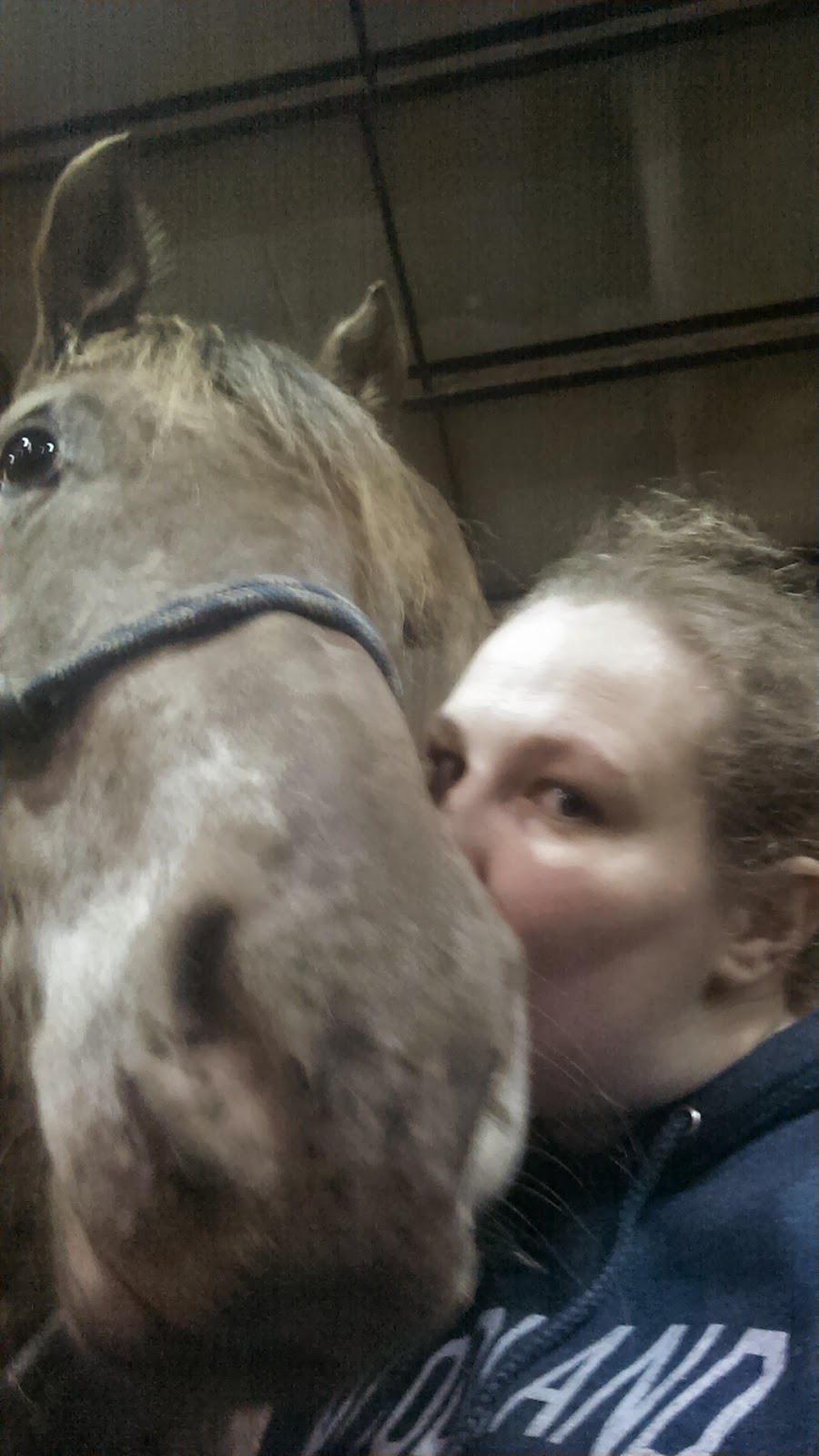 Kisses for the pony 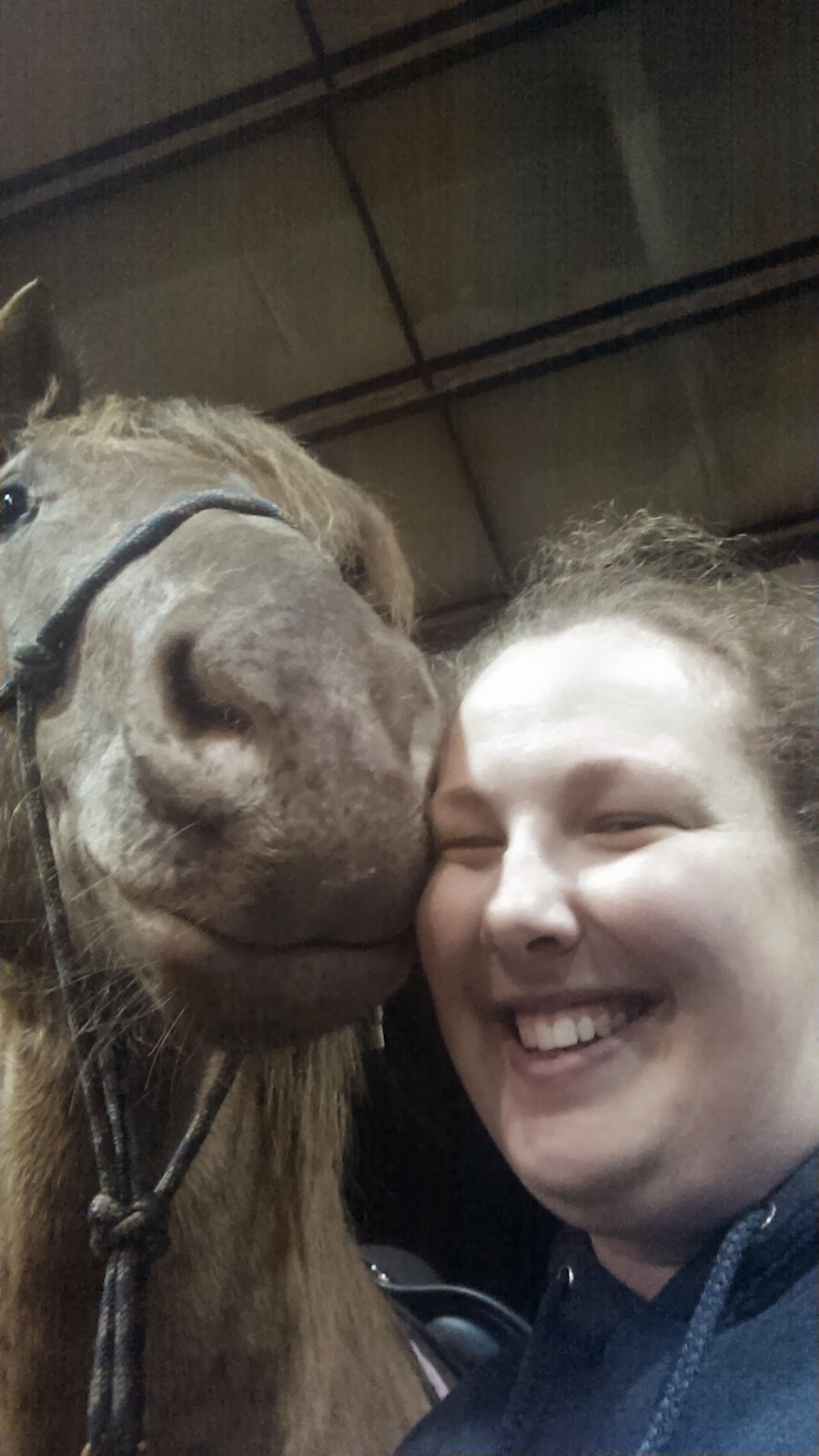 Kisses from the pony! 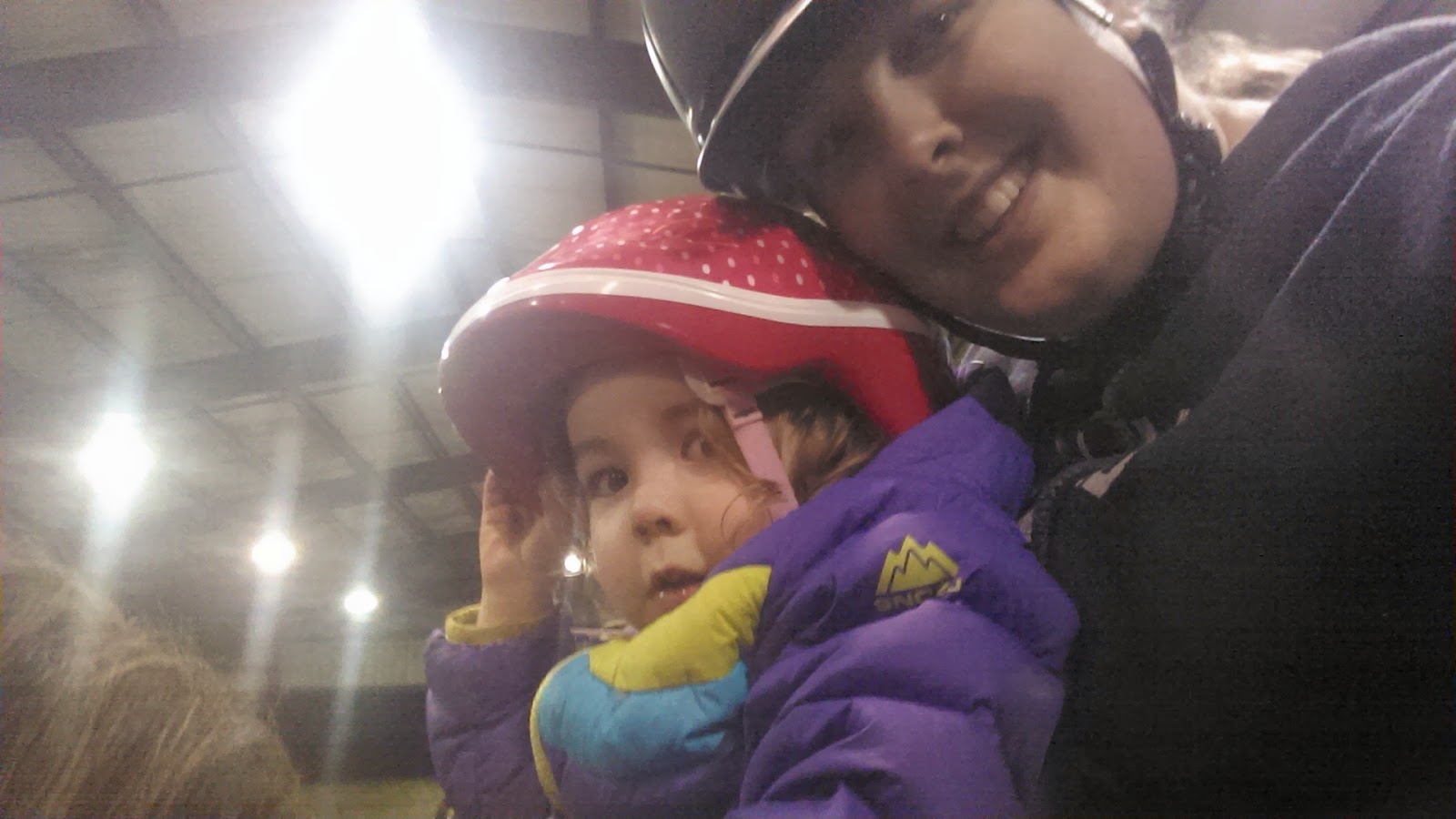 We always wear our helmets! 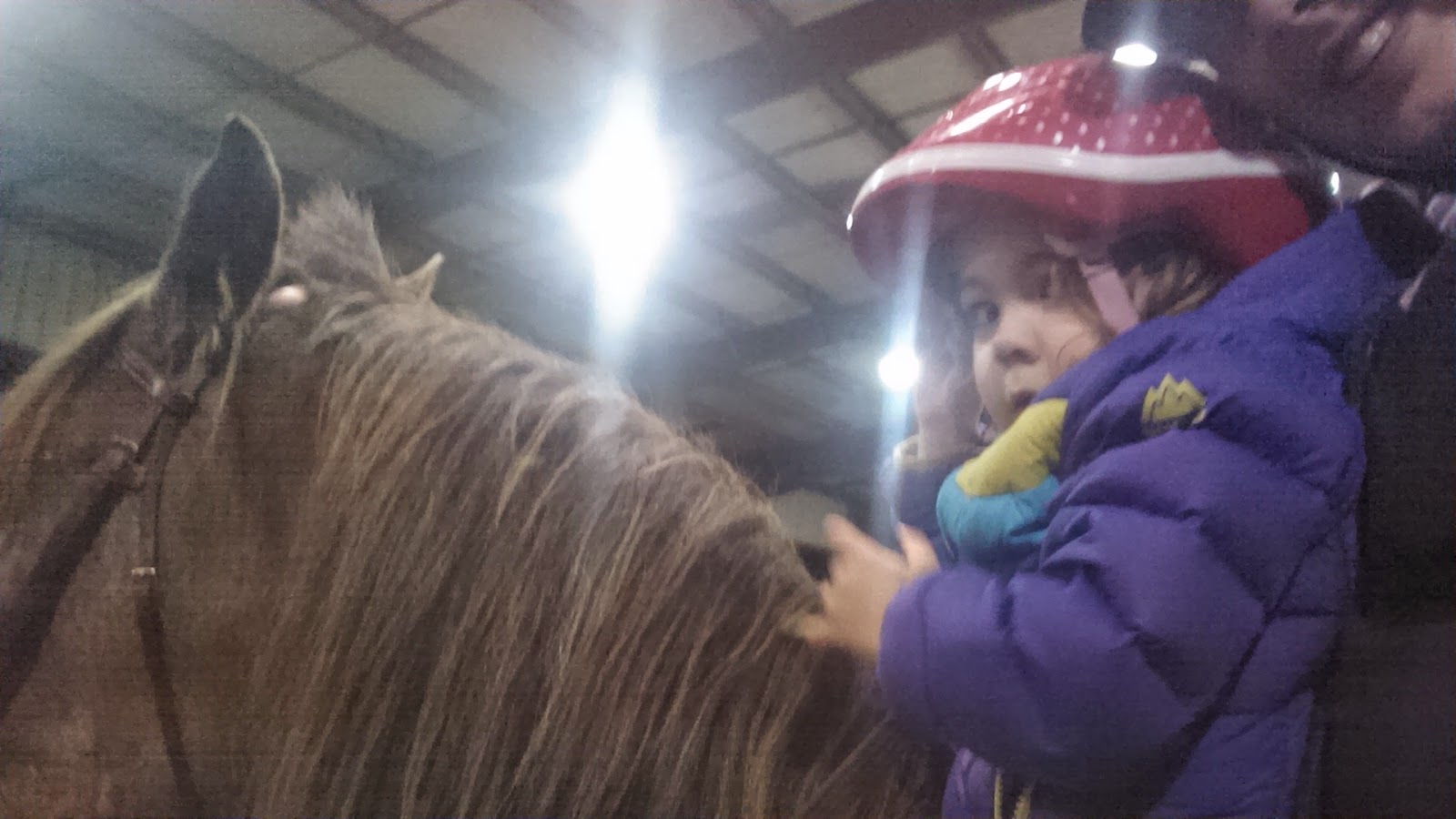 When we got into the car, Kaylee sighed happily and said "It was a good day."

Yup. It really was.

I knew google would pull through. Watch the sunset progress from today. Soooo pretty!

Have the rest of my day in pictures.

The Barn is my happy place

Normally this is my space to really just focus on myself and Gwyn. But to put today in context, I think you need to know that early this morning I drove Eric to the airport and saw him off (with our two cats) to Detroit Michigan. He starts his new job with GM tomorrow morning. I'm staying in Washington until the movers come to pack up our house at the end of the month with Kaylee. So I'm single parenting it for the next 2 weeks. 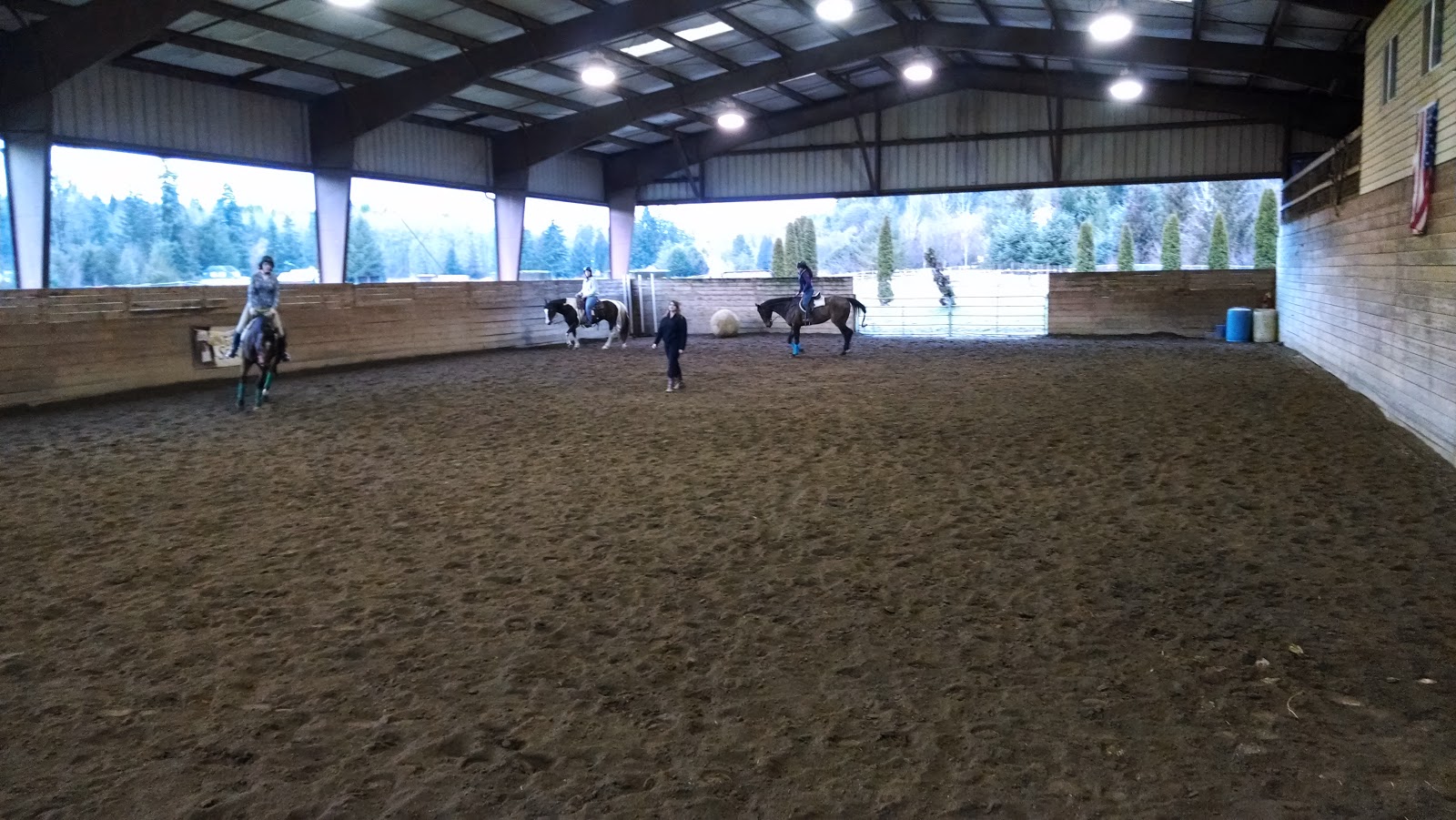 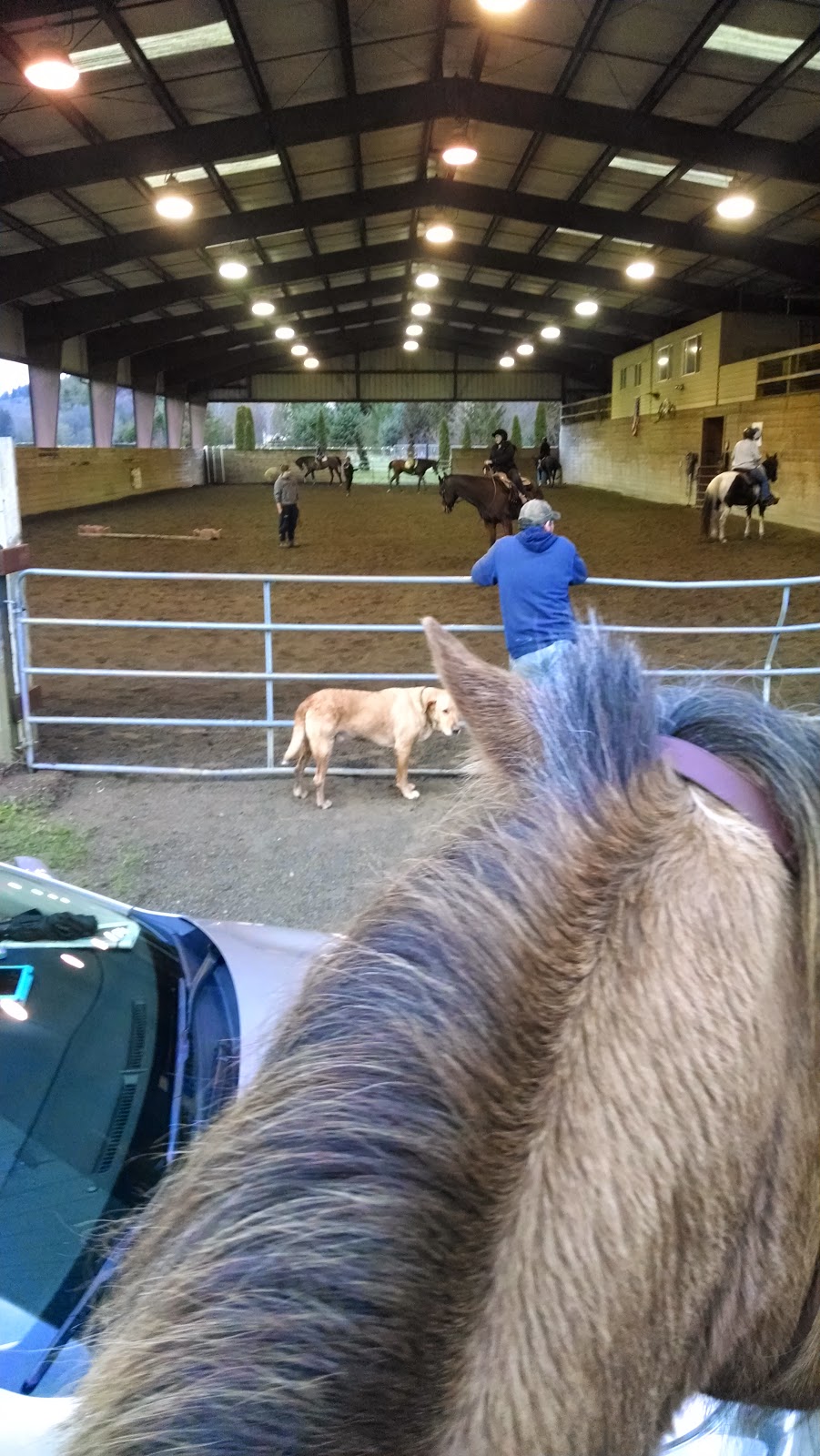 I decided to make a quick trip to the barn before picking Kaylee up (and instead of working on the house, I needed a pony break, no judging). The barn gets BUSY at 4pm! There was a group lesson going on, and more people kept coming in. Thankfully I got my lunging done before it was super full and eventually I couldn't stand being around that many. I'm so spoiled with my morning rides when I'm the only one in the ring.

I left and tried to go around the property on the perimeter trail but it was too soppy and muddy so I just did the hard packed part (and shorter) at a trot on the way out and walked back.

Gwyn was sweaty with the work that we did and we ended up riding for 30 minutes, not including lunging time, which took a while because she was still fresh and light in her hind end. I'm still loving my new saddle, so huzzah! Apparently I spooked a bunch of horses when we went trotting around the barn. One person remarked that it sounded like I was cantering. Nope, just a trot. But a BIG trot, Goober Mare wanted to get out and MOVE and stretch her legs and we just couldn't do that in the arena. She also wanted to go into the barn and we had a discussion about that.


GPS said I did about 2 miles. Huzzah! Forward progress!

Back in the SADDLE!

I met Dawn the saddle fitter out at the barn this morning. It was a rainy day, and totally gross. The horses had been kept inside the past few days to save the pastures and were set to be in the next couple until all this rain is gone.

Gwyn was an airhead to start. She was full of piss and vinegar AND they were loading hay into the loft from a truck in the indoor arena so things were just crazy. She stood still long enough for me to mount and then was a giraffe and stiff and tense. The saddle felt like it was tipping me forward just a tad so while Dawn added a bit more wool flocking, I lunged my Goober of a horse.

She finally started to calm down and her brain plugged back in. Hopped back on and I immediately had happy snorts and she was stretching out and down, even in the trot. Yessss.  The added bit of wool helped the tip of the saddle just enough for me and it's perfect and fits me, even if it's half an inch smaller than I expected. 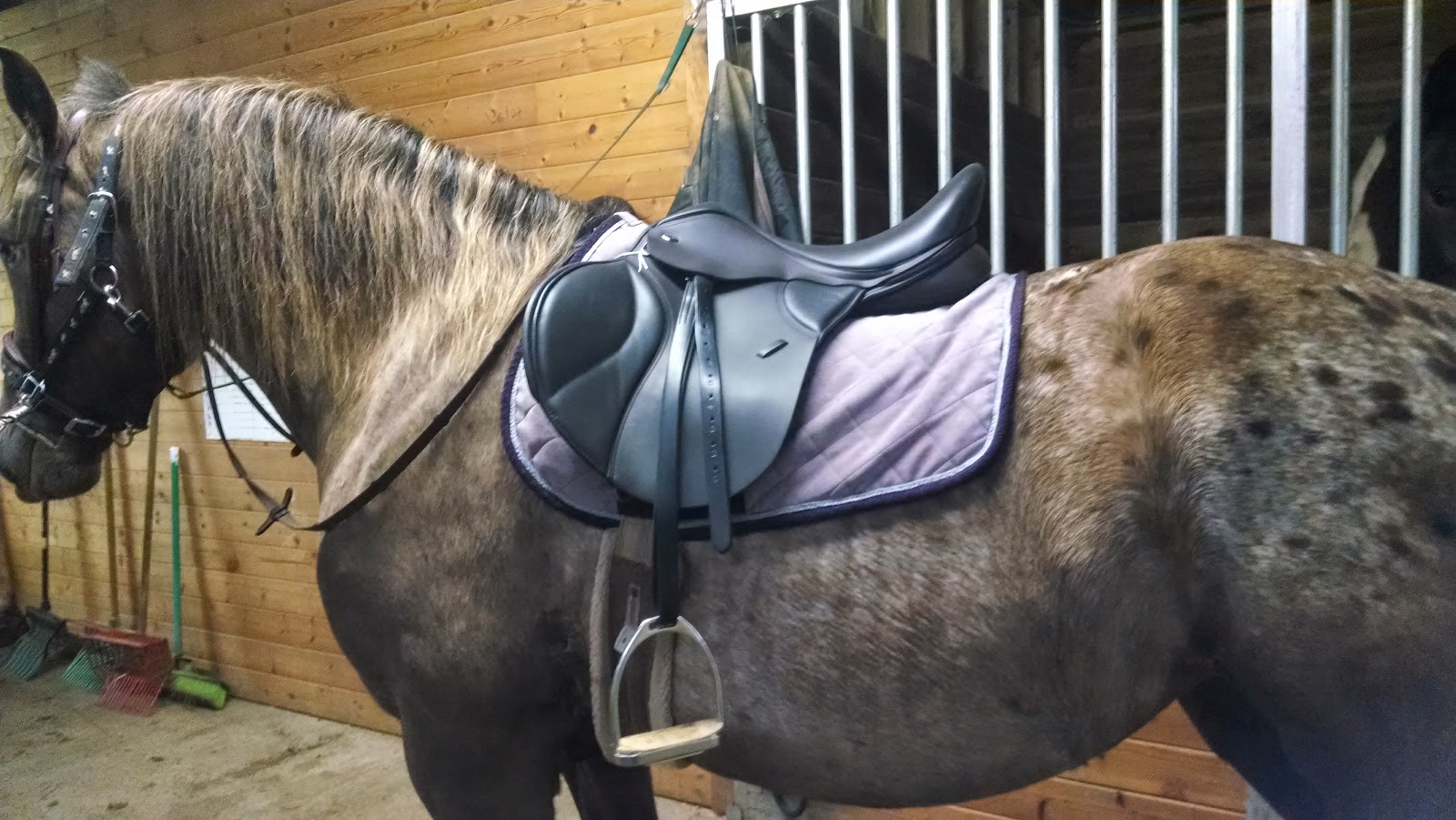 My new saddle, and not just new to me!! 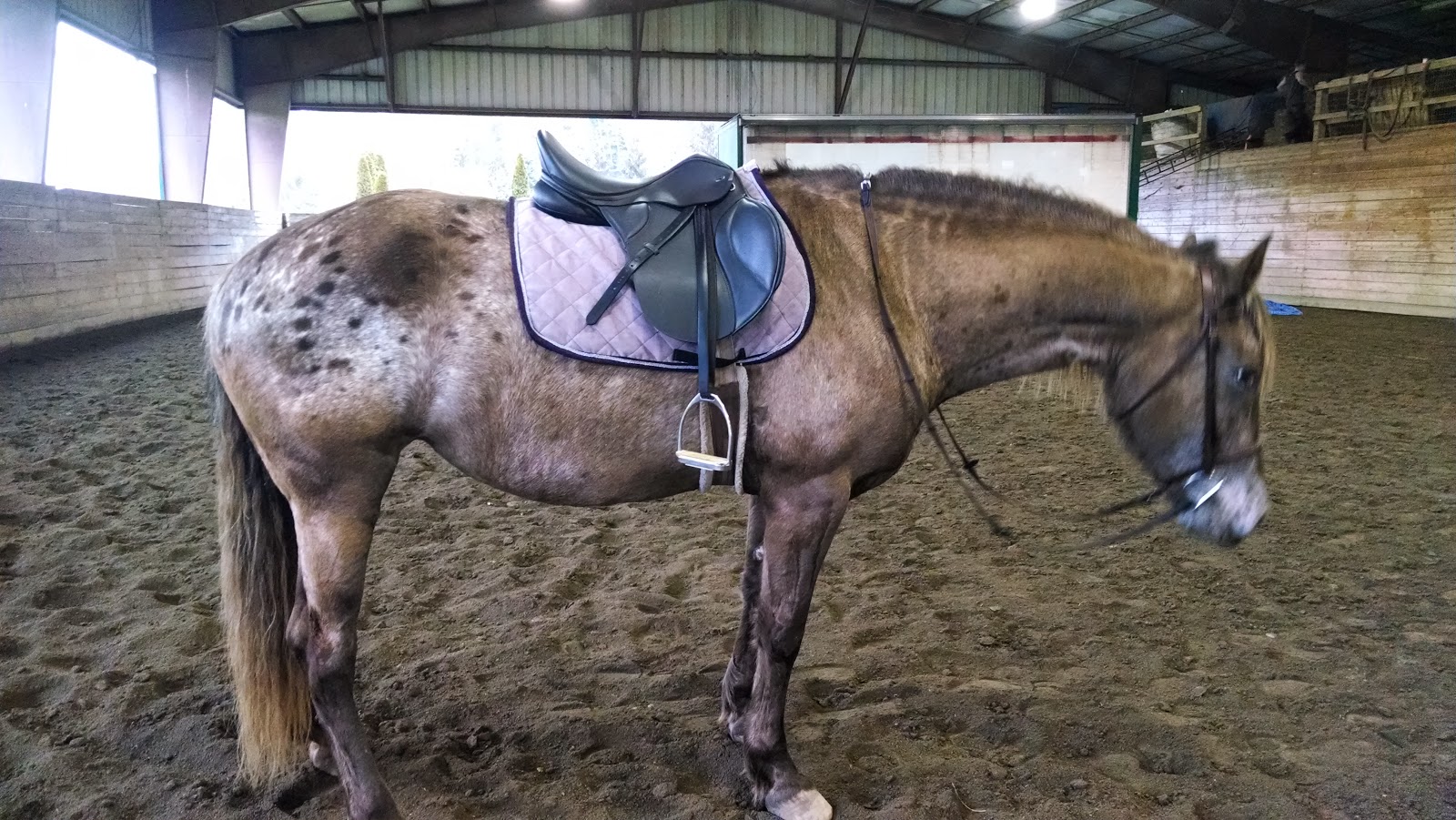 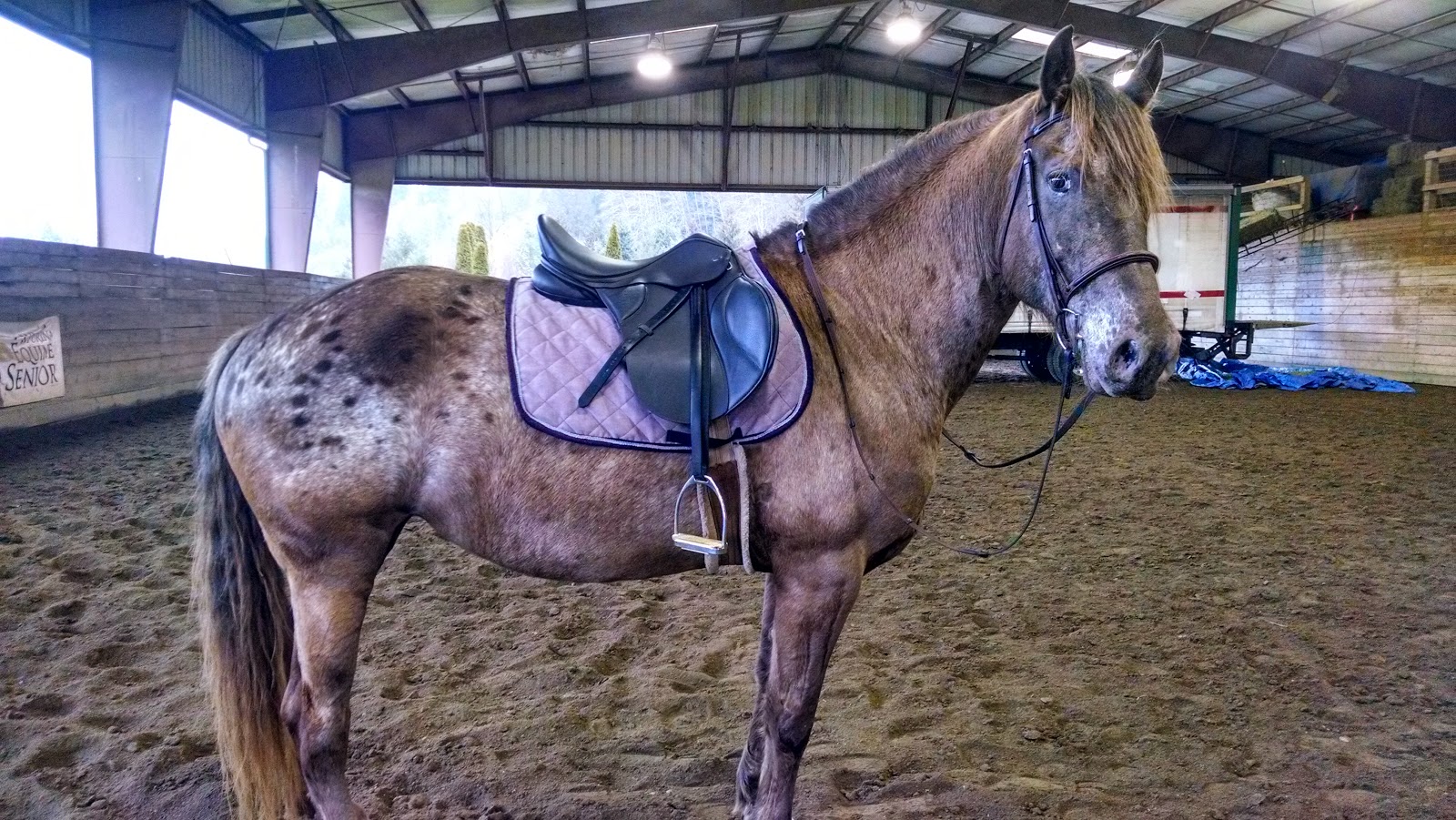 I need/want to get new stirrup leathers and a better girth, but all of that can wait until I'm in Michigan. I do have a gift card to Olson's Tack Shop so I might get a nice saddle cover. 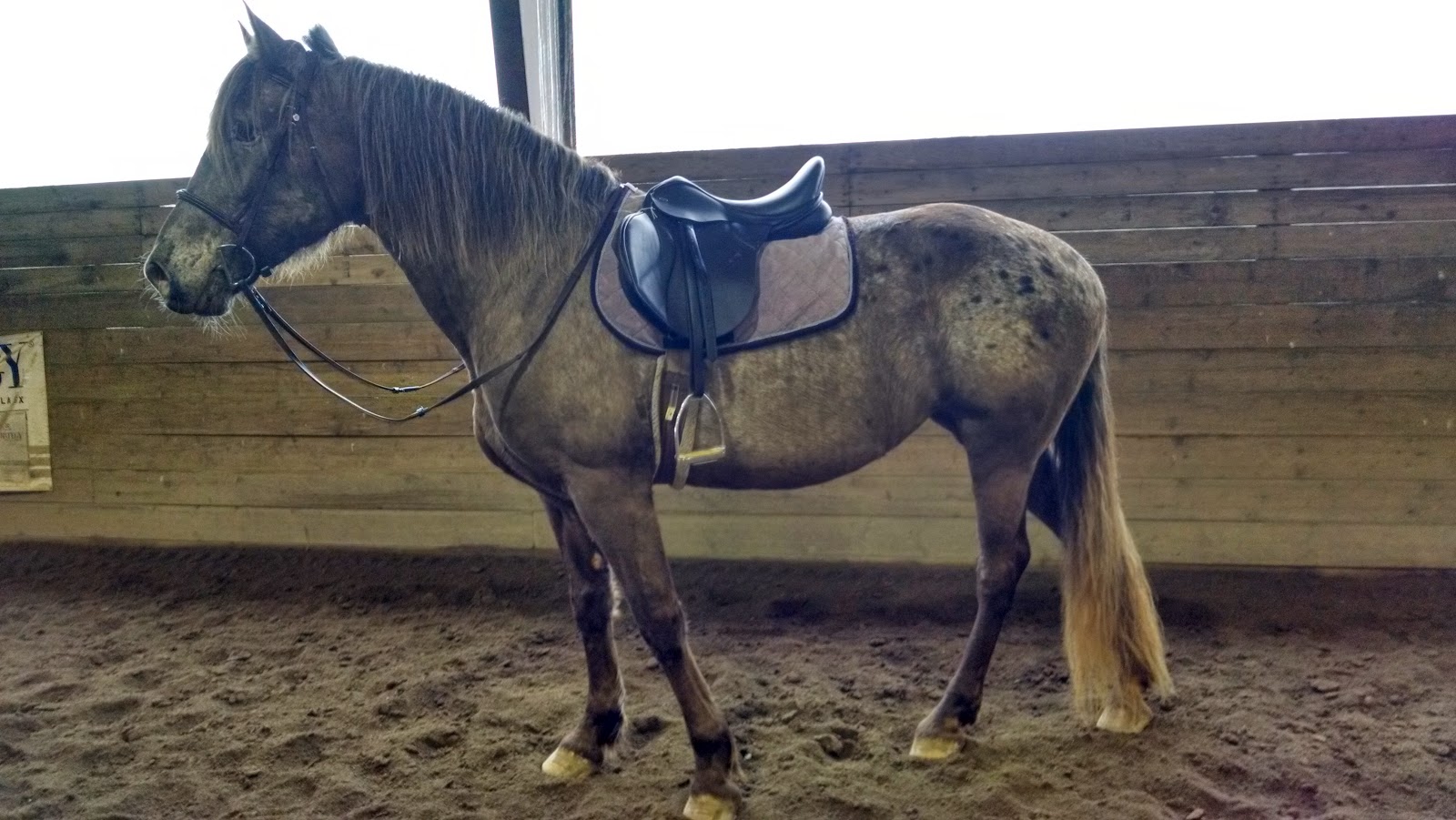 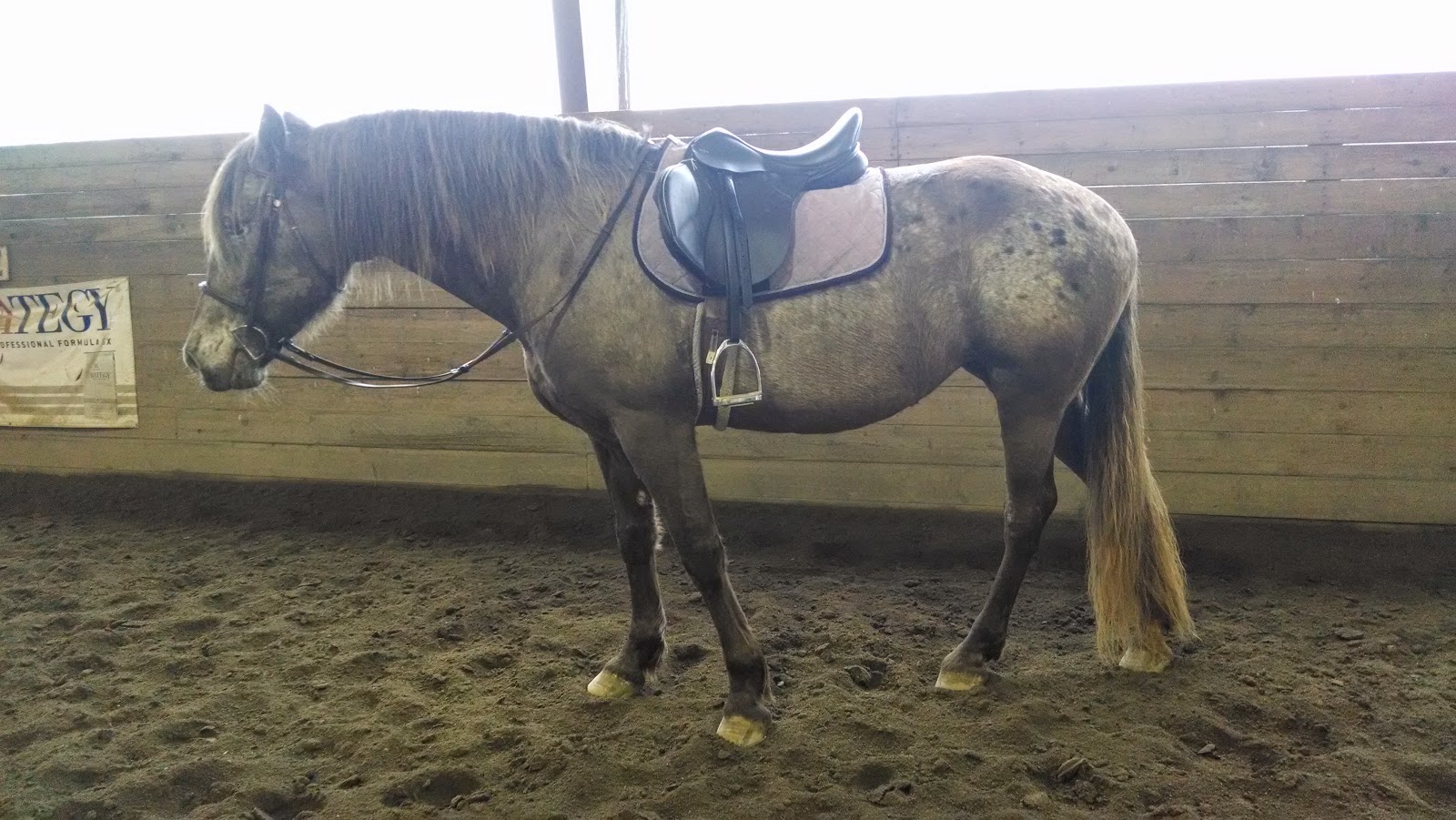 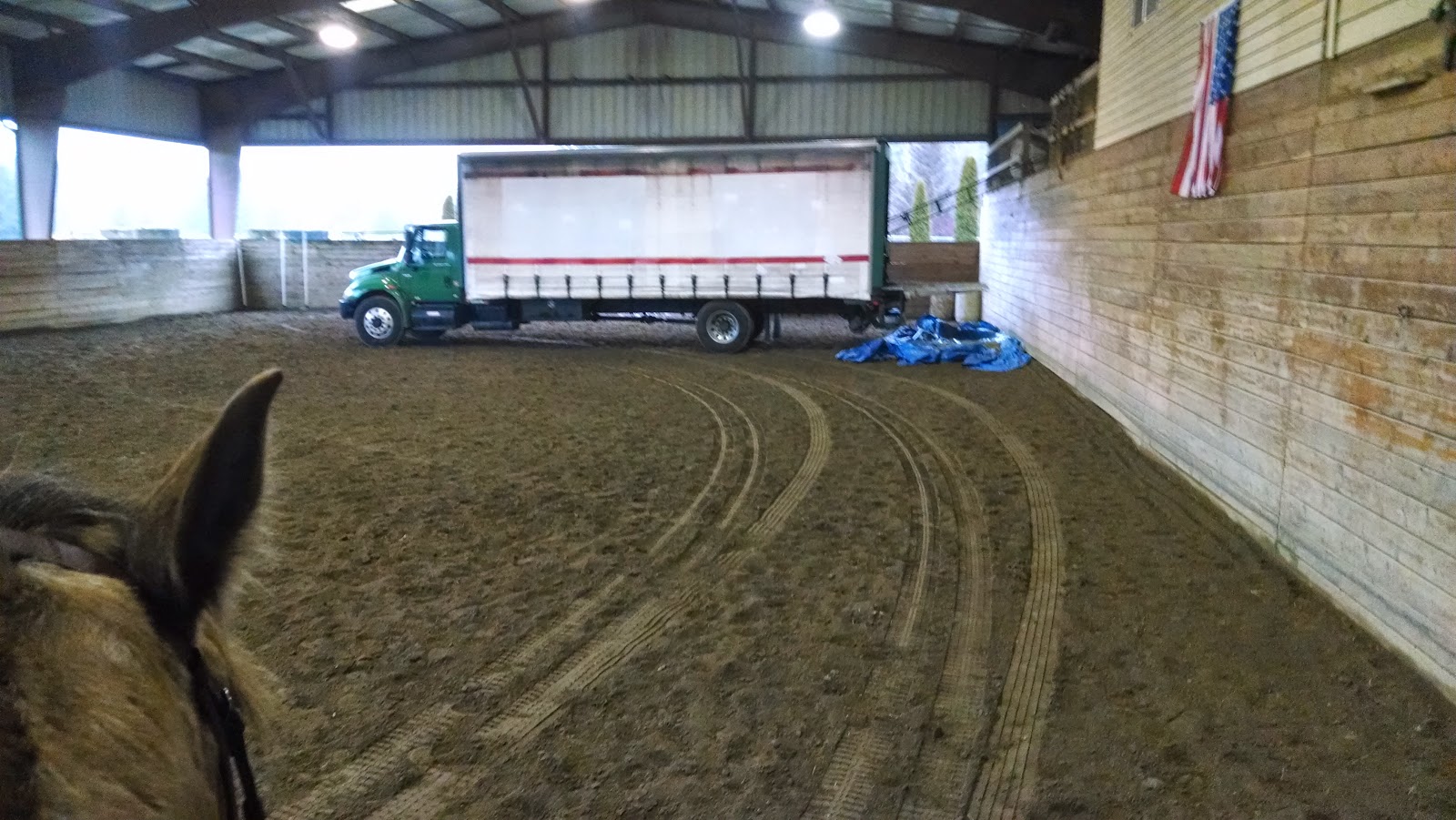 The big scary hay truck on the other side of the arena now. But Gwyn is much calmer. 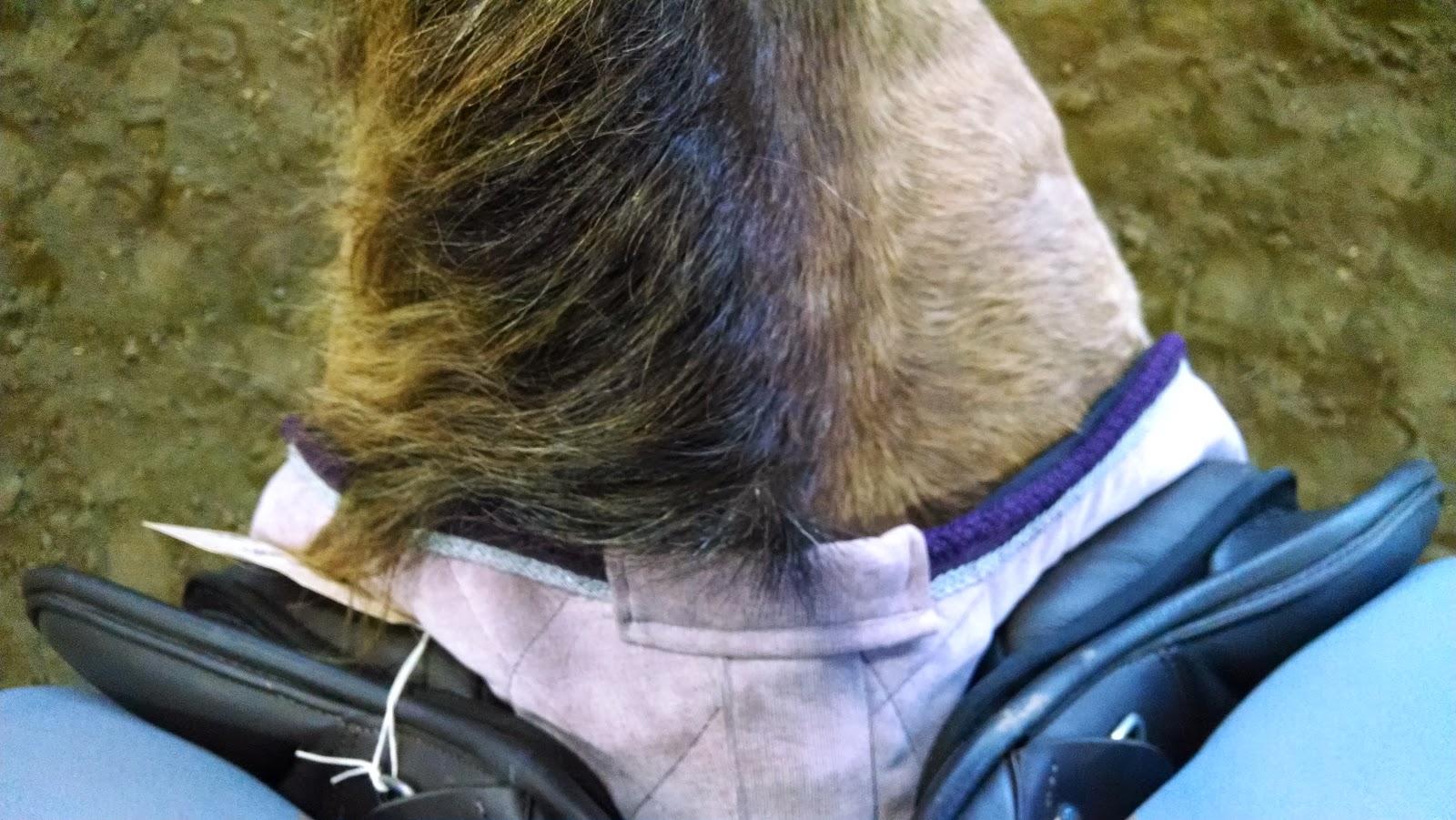 Yay actually riding in a saddle again! And using the saddle pad I made!!

Once I'd paid and Dawn left, I hopped back on because I hadn't been out riding in over 2 weeks. Shame on me. But I've had the plague and I'm only just now feeling better. Plus I've been using the childcare time to get the house ready to sell, so pony time has had to take a back seat, unfortunately.

I also started my exercise program back up so my legs were KILLING me. But in a good way. 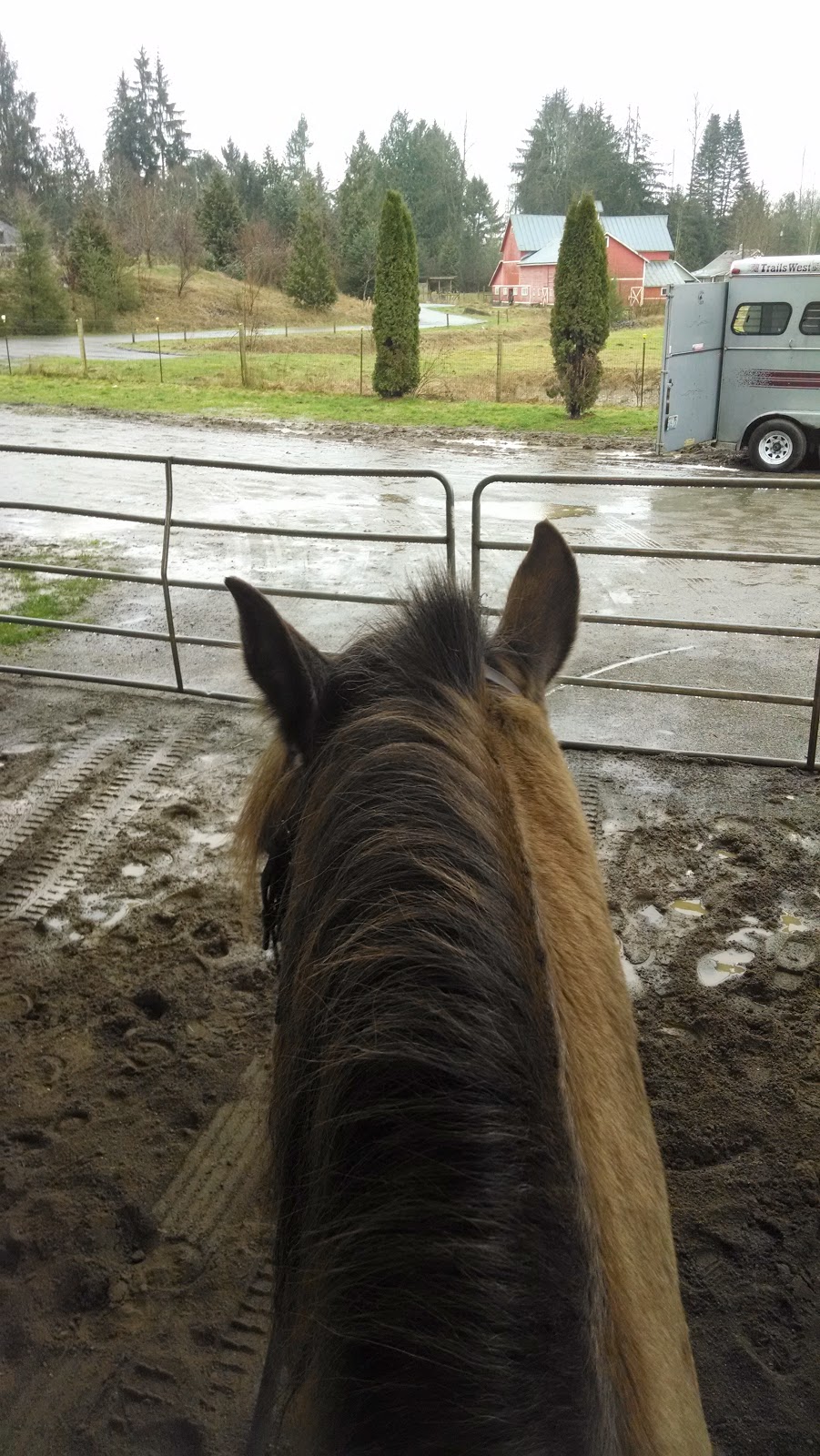 See? Gross outside, but the rain paused a bit. 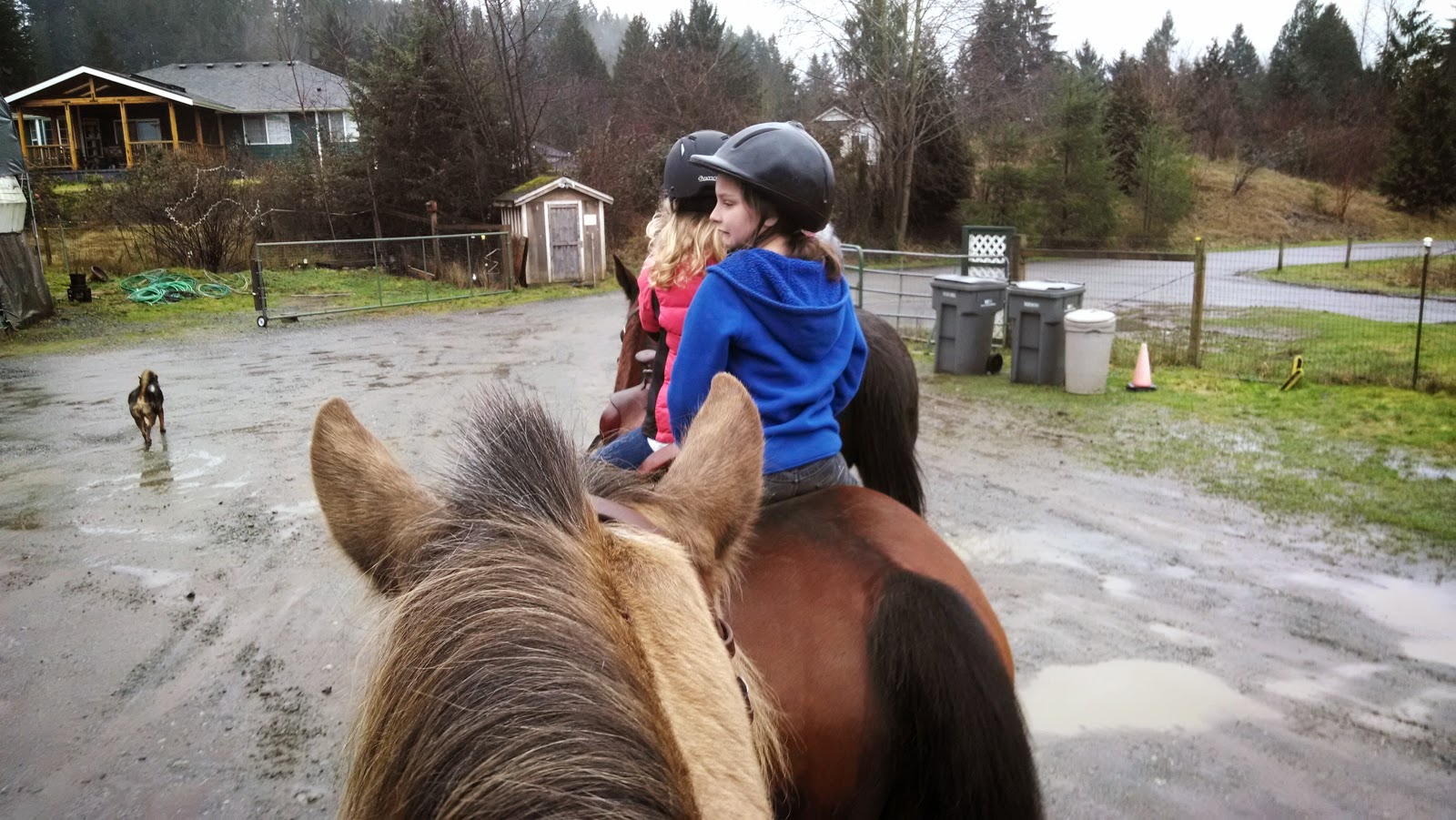 So I joined a group of riders in their lesson for a walk in the neighborhood. 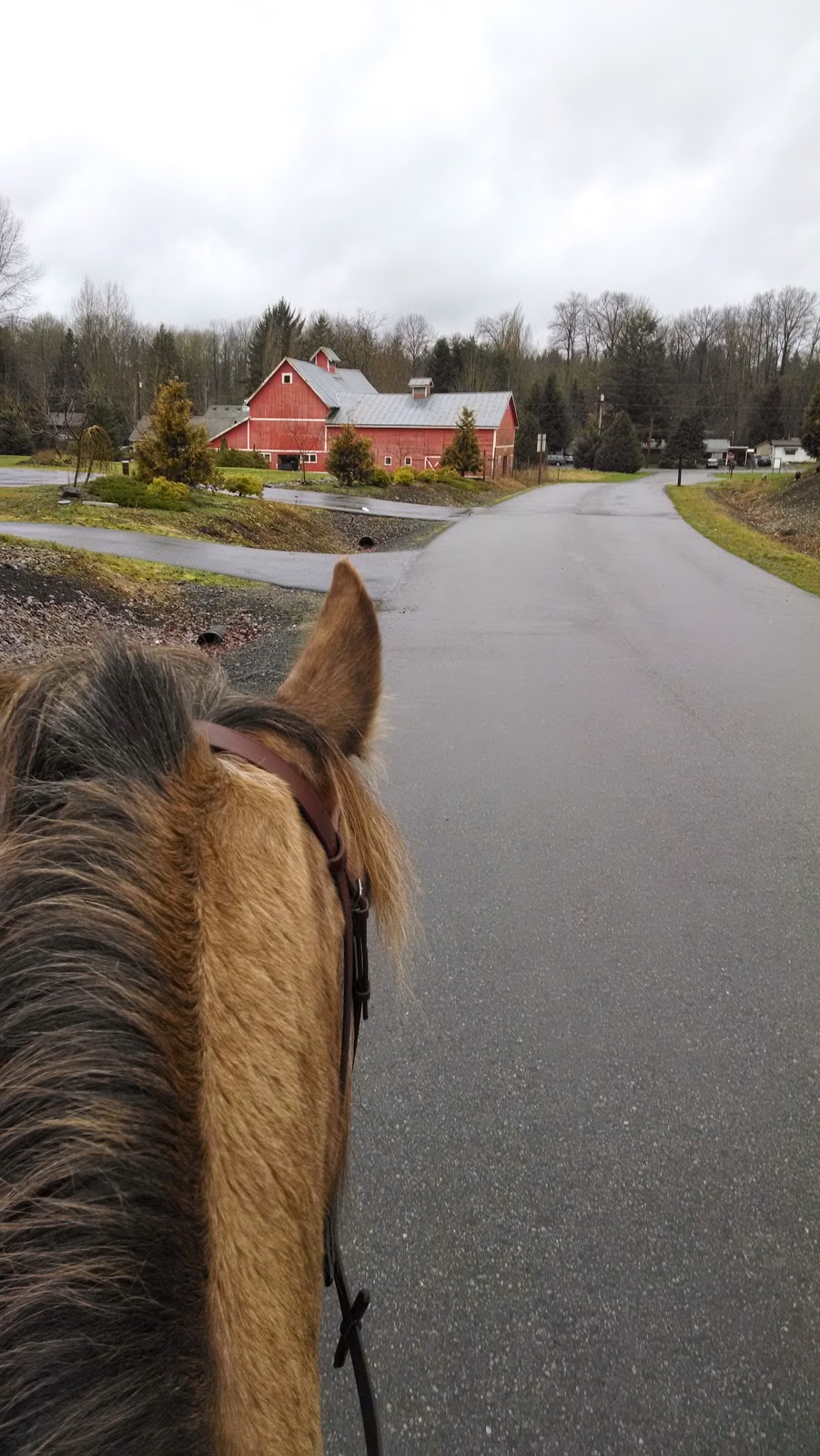 The red barn, also a part of the property at Shadows