I did not forget my girth. Or my saddle ;)

I DID forget to drive by a gas station and had Eric try and find me a Kroger (because points off of gas are put to good use filling up a truck tank). As I was angling to put the trailer in a string of empty spaces out in the middle of nowhere, the middle spot got sniped by a lady in a white SUV who was behind me.

Bitch. Fucking bitch. She pointedly ignored me asking her if that was necessary (there were closer single spaces available) and I ended up parking with the truck pretty much taking up a HUGE amount of space where people were trying to exit. I really wanted to block the asshole in, but I didn't dare take the chance she would try and hurt Gwyn without me there. Ooooo I was boiling mad.

I ended up seeing her leave as I was leaving the store and tossed my middle finger her way. She responded in kind. And then, after griping on the phone about it, I resolved to forget it because I REALLY did not want that bitch to spoil my weekend.


The drive after all that was otherwise uneventful. I arrived with plenty of daylight despite leaving later than I would have preferred. We set up camp and went out for a loosening up trail ride. Not too long, just enough to stretch legs in preparation for vetting in. 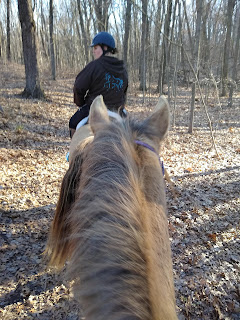 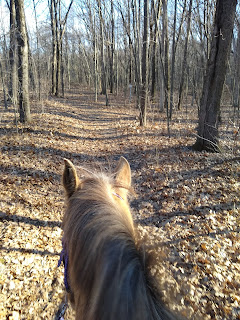 It was sunny and I was almost warm enough to go in a tank top. 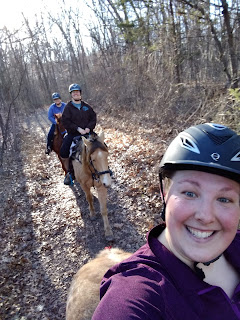 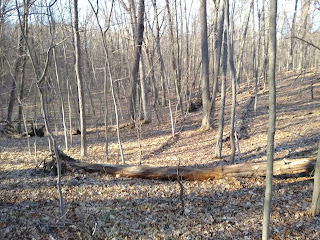 I really wish I had ridden this park at ALL in the summer. I've only come here in April. 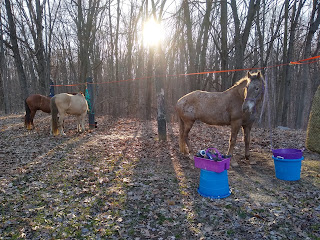 The ride manager called me a few days prior and told me that the site I had reserved was torn up after they removed a bunch of stumps and trees and that we needed to move. So on her recommendation, I picked the highest site that also allowed us enough space and poles to high line three horses with two rigs. My high line worked wonderfully! 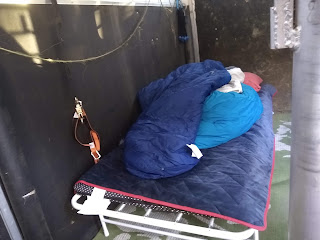 You can see my camping accommodations. Between being in the trailer and finally dialing in my sleeping bag and blankets, I can sleep comfortably outside in low 30s weather. SCORE 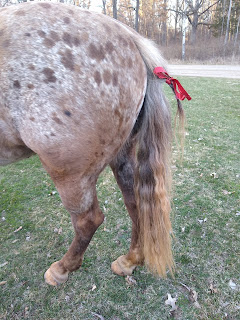 Gwyn got off the trailer and promptly started peeing everywhere because boys. So she got to wear a precautionary red ribbon. What a booty though!

One nice thing is that one of the co-ride managers did was coordinate with a blanket washing service. He came and picked up horse blankets on Friday during the ride meeting. For $10/blanket he would double wash and dry them. We expected them back on Sunday. Saturday morning, CLEAN blankets were awaiting us in the pavilion! It was a happy surprise! 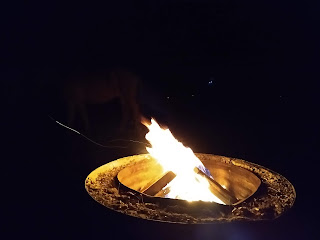 We had a fire both nights. Alicia brought those special powders that make the fire multicolored! 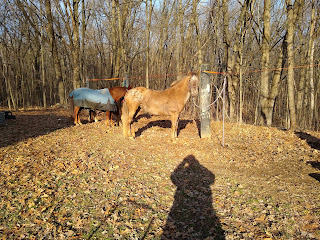 Saturday morning I was up well before my alarm, and well rested. I puttered and cleaned up poop, snuggled Gwyn and removed her blanket since it was going to be sunny and rather warm and headed down for my volunteering post as timer. 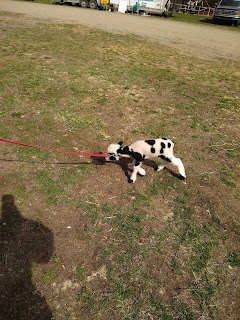 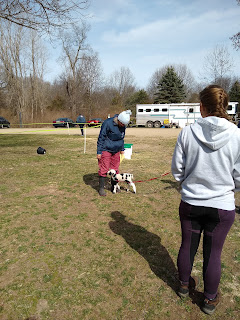 I don't have many pictures from Saturday because I was trying to be really good about detaching from social media for the weekend. I had a watch that I used to time and otherwise made myself ignore my phone. No regrets. Alicia and Amanda had a great ride though! Gilly came back a bit sore and the vet wouldn't let him go out again on Sunday. Given the footing and weather, that was probably a good call in the end. 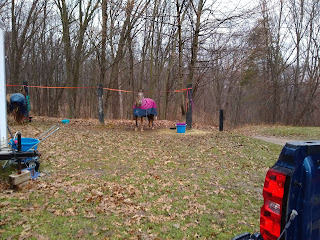 Sunday morning I awoke to rain. Rain rain rain on the horse trailer roof. We all knew it was coming. What was surprising was seeing the sleet/ice accumulation when I finally made myself get out of my very warm cot. 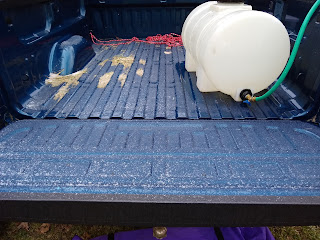 I knew the weather was going to be cruddy so I had moved my popup tent near the trailer and had set up a temporary tack room off the door. This let me tack up in relative dryness and allowed Gwyn to still see her buddies and not get sour immediately.

Since it was CTR I opted to take the penalty points and put boots on her hinds, since she has had rubs in the past when not booted. While I know, 'don't use new gear at competition', the teal quarter sheet is new to me. It's a HorZe brand waterproof rain sheet and fits far better and looks prettier (Alicia is jealous, it's her color). The boots are also new, black glitter neoprene brushing boots from Jeffers. The larges are very nearly too small.

I think Gwyn really liked the tent. In the beginning she would occasionally swing her butt out from under it and realize that she was getting pelted with sleet and then would immediately come back under the shelter. I have no regrets on this tent purchase. It's pretty easy to put up and take down. And it's purple. I've used it multiple trips now (White River, WEG, Oak Leaf and now Brighton)

I hopped on and we jigged down toward the trail start. The other campers who were riding today were doing the 25 and had already left (and were already on the trail) so we were leaving our buddies. However, there were brave folks who trailered in despite the weather!

Speaking of weather, the forecast called for high 30s F, with rain/wintry mix. Here's what I wore and what worked:

Ariat MaxTrax UL - a decidedly NOT waterproof riding boot. Regrets? Not too many. I also wore super thick wool socks and my feet were not wet when I finished, surprisingly.
Piper Softshell Winter Breech - These were an impulse purchase that I got FOR A STEAL (like $30) and had only tried on to verify they'd actually fit me. I had to size up 2 sizes and the waist/belly is giant on me but it's tight in the legs (and my belly is ample let's not mince words because I am fat. Period.) They're advertised as waterproof and I pretty much went, let's shock test these bad boys. Those suckers shed water like it was their job (and it was). We were drizzled on. We were poured on. We were hailed on. But when I took them off after everything was done I was totally dry.
REI Rainier Rain Jacket - I picked this sucker up when I knew I was going to be facing down a hurricane at WEG. Again, fat, so I had to go with a men's size. It kept me dry at WEG, it kept me dry here too. Layered under it was a fleece vest with giant hand warmers in each zipper pocket, a thinner athletic layer, a wool long sleeve base layer and a camisole since I couldn't find my sports bra. I was warm.
Not waterproof gloves - REGRETS. Fingers got cold. I also used my mohair reins. So it was like constantly holding a sponge.

It was up in the air if I was going out with the first group or with a second. Since enough people no-showed, I went out with group 1.

And she proceeded to buck gleefully as we took off. Enjoy this, lol. 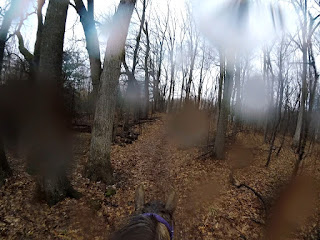 As you can see, there was rain constantly on the go pro. 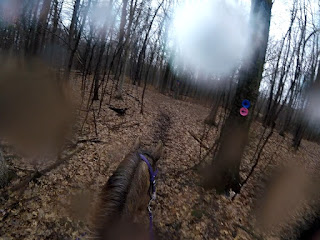 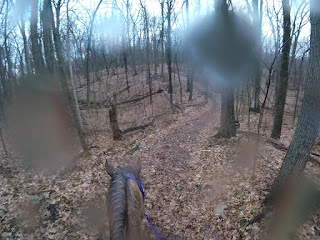 This was a big hill that she pooped out on partway up. Brighton is deceptive. The hills are short but steep and constantly rolling. It's a great place to ride.

I had started the ride with my rain jacket hood under the helmet, but I realized I had limited range of motion turning my head and I couldn't hear things very well because of the fabric swish. I knew there were other riders behind me and I wanted to hear them coming.

So we paused and I unbuckled my helmet to start to slide my hood off and....

Here's video. The other group of riders came up JUST as I was doing this and spooked Gwyn. I nearly came off the back of her, and all I could think was "SHIT HANG ON, WORST time to adjust a helmet!"

Miraculously, I stayed on. The helmet landed, and Mindy hopped off to grab it for me (she greets the go-pro in the video)  It could have been disastrous and just absolutely a convergence of everything going wrong. I tucked in behind the group after that and was glad I did. They were a great group of folks to ride with.

And a video of that spot because it's so pretty to me.

Video of the water and then later at the lollipop turn around, it started to sleet/freezing rain just as we hit open trail. You can hear it pinging the camera. The girl on the other appy was there for her first ride!


The pace was slow for a CTR, we had 2hr, 40 min to go 15 miles. We did a lot of walking on the second half to try and eat up time but we ended up nailing our 10 minute window and no one got time penalties (in our group)!

This weather was perfect for Gwyn, who still had a good deal of winter coat left. It was cool and damp and that kept her from heating up considerably, which is always something I have to manage on rides in the summer. At our 10 minute P/R, she was already down to near resting and dropped even further at the final trot out. She was still sassy on our trot circles (CTR has you circle in each direction, instead of doing a down and back) and perky. We could have done a 25 that day but I'm happy with my decision to stay at 15. 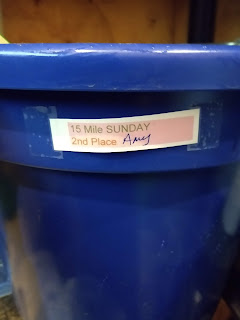 Gwyn and I were 1st place heavyweight, First place for breed "Other" (i.e. not arab or half-arab) and 2nd place overall! I got a blue ribbon and a bucket! And I chose a sweatscraper for a completion prize. 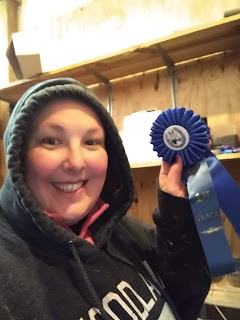