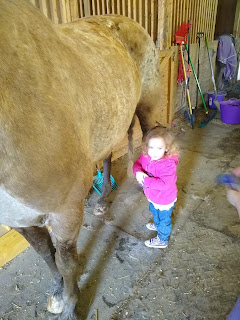 Hazel saw me putting on a sweatshirt and asked what I was doing. I told her I was riding. "I wanna come toooo!" Turns out, I didn't need the sweatshirt. 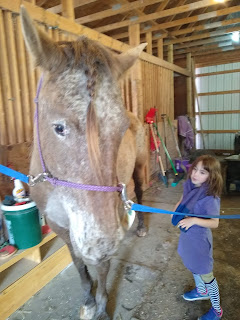 Which Kaylee overheard and so SHE wanted to come as well. 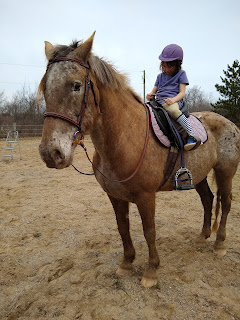 Hazel decided that once she had picked out Gwyn's feet she was done. Kaylee stuck around. I lunged Gwyn first because I wanted to see if I could pick out any differences after her chiropractor adjustment.

Right away, with a slight cue to canter on her better side, she had a non-rushed, three beat canter with legs landing in the proper order. I had her canter the two poles and she didn't miss a beat. We tried the other direction and she still had some wonkiness, but I think it's her weaker side. She did manage to have at least one short cantering period on the correct lead, front and back, which is way better. I'll continue to do some trot poles to get her strengthened and build up her back so it gets easier. She wants to rush more going to the left and that's when her bunny hopping gets really bad or when she really wants to buck. 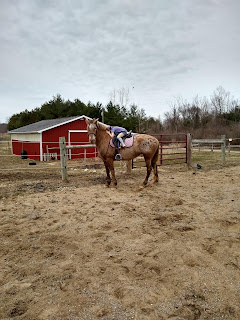 She was a bit of a pill for Kaylee because I'd brought Saffron to the front pasture and she kept wanting to go back to the arena gate. But aside from always walking back to the gate, she was very safe. 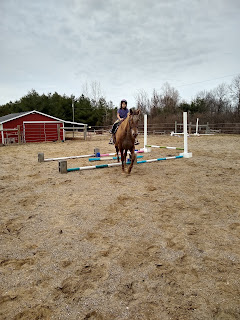 Kaylee even got to walk over poles.

Then I got on while Kaylee covered herself in sand.  We started with some large walking loops then some trotting. When I moved to the canter I made sure we were going in her good direction and wonder of wonders I had a controllable canter that I then rode over ground poles as well. I praised her so much.

I tried her bad side and it was immediate toe biting and ear pinning. So she was not happy with that. I didn't push it, she was probably still sore from the adjustment. We walked a bit more and then left the arena to hack around the property and up to the fields. 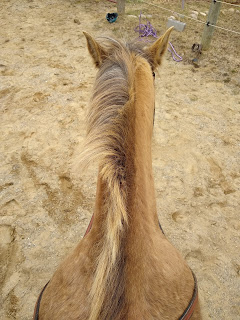 We walked around the front pasture, then she was a dingus across the septic field and ran me under a low hanging pine tree branch. JERK.

Then we headed up to the fields and she was excited about that, but we had to wait until the neighbor came and caught his sometimes very aggressive doberman who was playing guard dog on their property. Humans gave me permission, but dog is new (belongs to their adult daughter who is currently living with them). I don't like the dog. It's okay with adults, has awful recall, and has snapped at my kids. I do not let the kids go near that dog.

Once we got past scary dog we got to the farm fields. The entry field was muckier than I had thought and Gwyn kept trying to get out of the muck by going further to the side, but everywhere was bad. So I got run into bushes. Jerk. 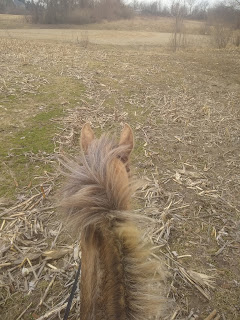 Then we hit the road and I thought, "This will be a good place to do some straight line trotting, which should be fairly easy on her body"
Gwyn went, "GALLOP!" and took off, drifting dangerously toward ditches. I do not trust her to gallop in the open. This was not fine. 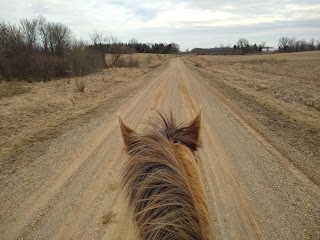 I went into a different field section that was not as low and the footing was better. So we practiced whoa.  Due to the physical borders of the field I felt a bit safer if Gwyn tried to take off on me and so we practiced big canter circles with the reward of cantering the slight uphill on the straight. She did really well. I tried to school the other lead but she preferred to counter canter.   That right side, :/   I didn't push it and started to head back as she was puffing pretty hard from the canter work. I haven't asked that much from her in a while.

The way these properties are set up, there are drainage ditched between the road and the property. Some of them are steep, some are gentler. Gwyn offered to turn into the ditch and not one to pass up an opportunity to face terrain we might encounter on cross country, I let her go down. She did jump the bottom and from there decided that we were galloping home and took off on me again. I finally was able to circle and then one rein stop but she's a freight train and it's not fun in the open when I'm paranoid about falling and then her running out into traffic.  We walked back home and she was sooooo sweaty. 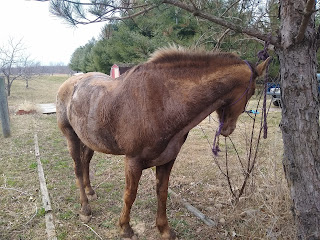 It was warm enough though that I figured I could hose her off. And then, I figured, why not actually bathe her? So Goober Pony got lathered up with soap and rinsed. The water was just browwwwn coming off. And when I tried to soap up her tail in the bucket the water must have been super cold on her tailbone and she hunched right up. Ooops.

BUT DON'T RUN AWAY WITH ME, YOU DOLT 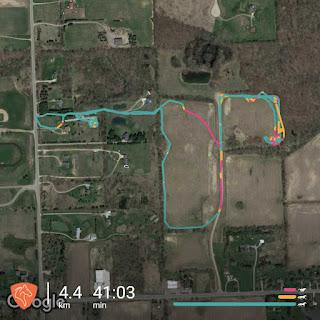 The two long red stretches are where she ran away with me. The mix on that right side is where we schooled so wonderfully.


Like, there were issues this ride. And more than ever I really wish I had access to a giant jumper ring where I could try and school large canter geometry. Soon. Soon I will. In Washington I can haul to the Hollywood Hill Saddle Club and ride in that arena as a member. It's giant and well maintained with trails to cool down on afterward.

There were issues. But there were also good things. And I feel like I'm dialing in more on what I need to do to work through those issues. I came back to the house smiling and happy because I like this challenge. And being out there figuring it out is still my retreat from life's stresses.
Posted by Amy M at 8:10 PM