My nemesis, apparently. And by extension my hands, which seems to be a thing going around blogland today (as I distract myself from writing this by catching up on my feed...)

I resolved this week to work on my hands (and elbows) both on and off the horse. Jim suggested I toss balls and catch them with my elbows bent and practice the give and take with that. So I've been doing that. But I also wanted to incorporate something intentional into my gym trips as well.

So I added a half hour before my T/Th yoga sessions to go run on the elliptical at the Y (thank you included childcare...)   I kept my hands gently, closed fingers on the swinging grips, not the heart rate monitor grips, and focused on maintaining steady contact as my legs moved them.

I did this T/W/Th. Wednesday evening I went out to ride after my Monday lesson. I gave myself permission to ONLY work on my hands. I wasn't going to try and maintain pace through seat only, I wasn't going to really focus on my leg. Just on keeping steady rein contact. I felt like my hands were EVERYWHERE. And I'll need to check in next Monday to be sure, but I think that's more what I'm supposed to be doing?  Just by keeping my hands in motion with Gwyn she started dropping and carrying herself more. Probably because I wasn't banging her in the mouth anymore. 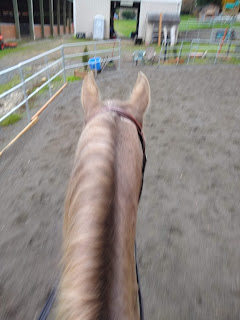 Then I had the shortest ride ever this morning because after getting a coat of hoof armor on I only had about 20 minutes before I needed to start untacking and leaving to pick up Hazel. For that ride the rain held off just long enough. I started to notice that my WHOLE body was moving instead of just my arms and elbows, so I practiced stillness in my core while keeping elbows moving and giving. 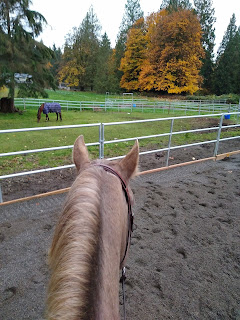 We also walked up the slight hill on the property twice. And I made her trot over those cross rails in a 'course'. She does not jump them. They are too small. For a super short ride, I was pleased that she was walking around with her head lower, and not giraffing. In fact, she was fairly lazy. But also dropping into contact, which I tried VERY hard not to jab her in the mouth by stiff hands.