Cortney asked me to accompany her to Pilchuck Tree Farm on Sunday so she wouldn't be riding completely solo with a lady who was trying out her Pandora saddle.  I gladly agreed. I never made it to ride there when we lived here last and I always was jealous of the pictures I saw of folks who did ride there. 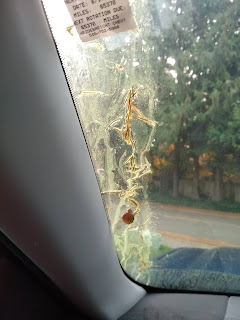 My day started fairly early, though due to the time change it wasn't that bad. I made a run to the trash and recycling transfer station to unload my truck and was off to the barn to hitch and load. I ended up running SUPER early, which is unheard of for me. I ended up being incredibly glad I was early/on time though!

I got to the meet point parking lot (there are three places where horse trailers can park to access the trails) and horse trailers started arriving in quick succession after me. There were two there, I was the third, a local rider next to me and Cortney came after. Then a couple strangers. The lot was FULL. 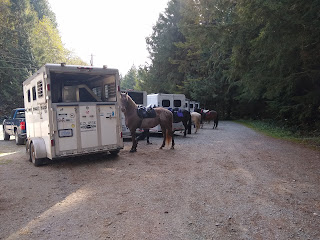 I was pleasantly surprised that the rider who parked next to me was a face I recognized as I follow her on blogger as well! Aarene of Haiku Farm is a pretty well known voice in the PNW endurance community and the standardbred endurance community as she rides a giant standardbred mare named Fiddle, aka The Dragon. I started following her blog shortly after moving to Michigan so I could live vicariously through her awesome posts (And I do recommend subscribing to her posts or adding them to your feed if you want more of witty, intelligent horse women). She frequents these trails and I've seen many pictures of them through the seasons.
This was the last day the single track trails would be open on this side of the tree farm. After Nov 4, the trails would close for the season to preserve the trail integrity but the logging roads would still be available. 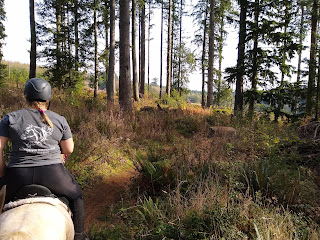 We kept mostly to a walk, as the lady who was purchasing doesn't do much more than and wanted to test ride Cortney's saddle for a ride she would normally do. There was some shuffling of trail order after the lead horses, two geldings started getting upset at continuing on the trail and hadn't  quite settled down to behave yet. Splendid and Gwyn were more than happy to eventually strike out in front which helped pull the boys along and gave them a chance to absorb the chill energy from Gwyn and Splendid, who were both just pleased to be out on the trail. 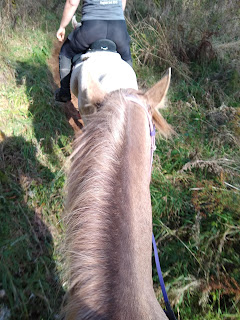 Gwyn quickly figured out that we were not racing and while she really just wanted to hug Splendid's butt, she was content to maintain a forward walk. 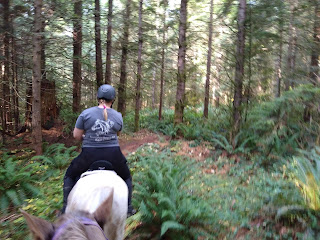 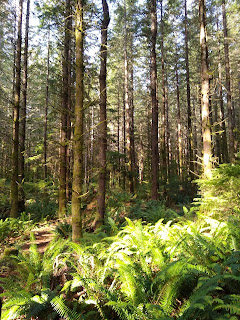 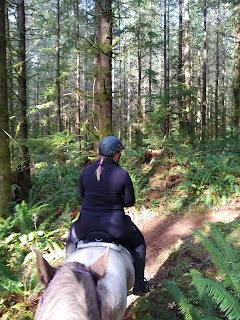 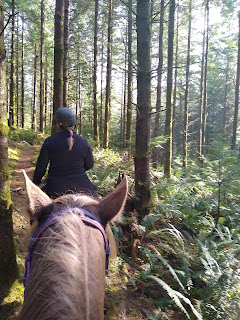 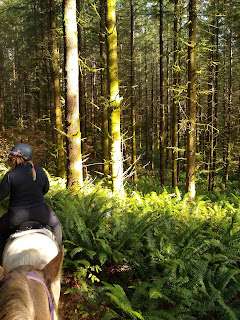 The sun was out and while it wasn't particularly warm, especially in the denser forest canopy, it was at least dry and pleasant. 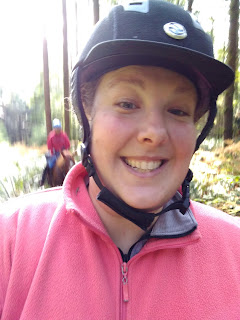 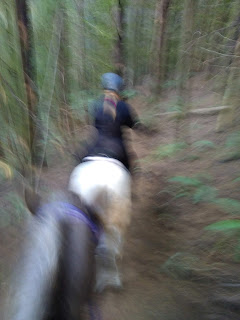 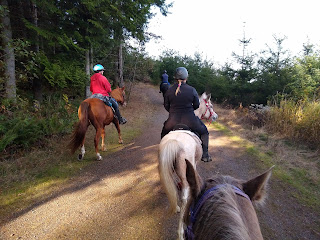 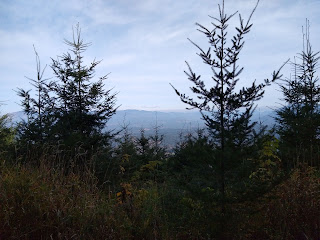 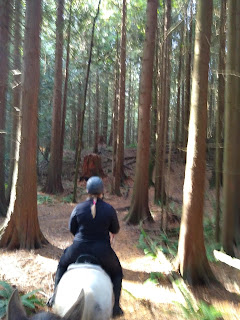 We came out to a familiar sight of the monument. I've seen this a lot on Haiku Farm's blog and also on another blog from someone who has also moved away from the PNW. It was awesome to see the sculpture/monument in person. I didn't realize the thing was hollow and happily, neither Gwyn nor Splendid seemed to care about the sound when we idly knocked in. 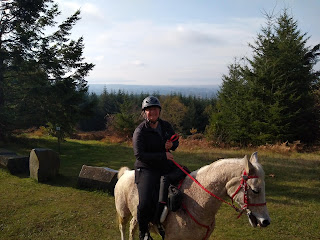 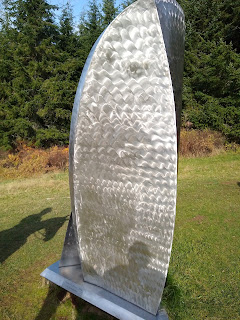 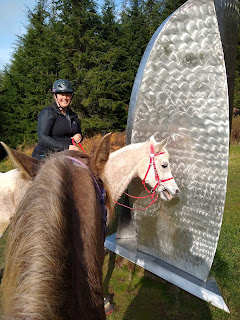 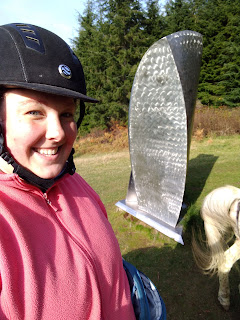 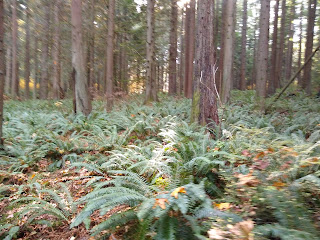 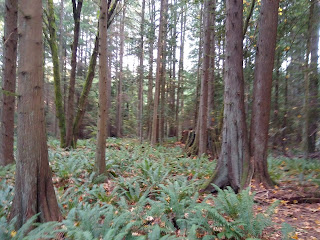 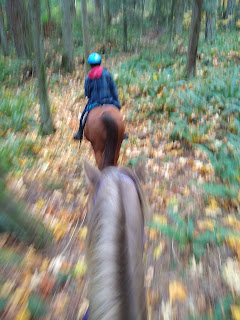 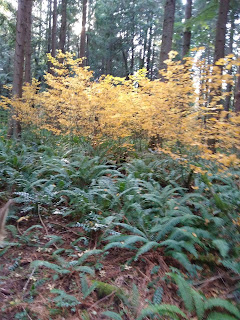 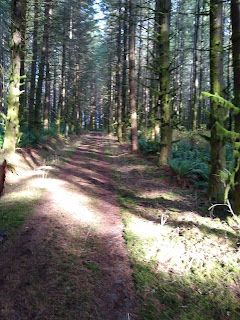 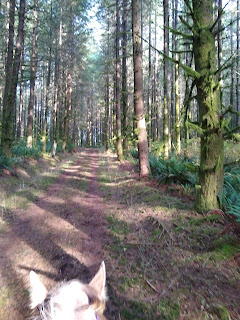 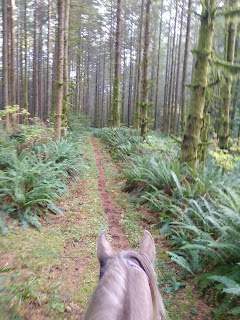 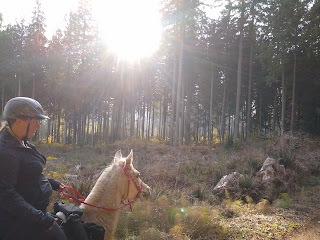 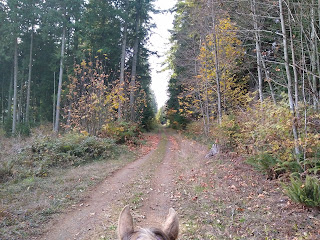 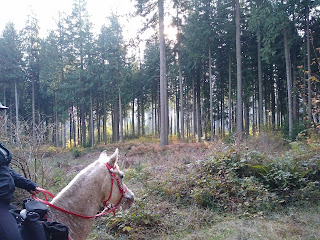 I did test out the scoot boots again and one foot was good, the other twisted around ridiculously. I ended up taking it off completely. Thankfully the footing wasn't that bad except for some parts of the logging roads where the giant rocks were placed over new culverts. I'm still troubleshooting, though I'm pleased with the change to the EVA foam instead of the Easyboot gaiters for rubbing prevention. Gwyn had NO rubs this ride. Nearly 10 miles. 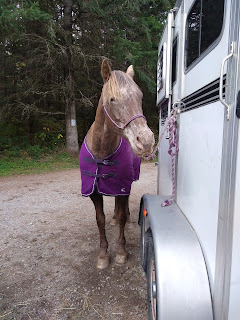 Gwyn was nice and sweaty by the end and got to snuggle in her cooler. Cortney and I are already planning return trips through the winter. Both here and Taylor mountain should be fairly good through winter, even if some trails are off limits and I want to develop my own sense of direction for the trail network at both places. That's likely going to require some solo wanderings on my part though.