We played DnD on Saturday and that evening Eric told me, "So, you're going trail riding tomorrow, right? For your birthday?"  I was confused, it wasn't originally in the plan for me... but yes. I can pick up what you're putting down, husband.

I went for a trail ride.
I decided to hit new trail from previous just so I could reacquaint myself with the trail system at Lord Hill.  I also wanted to do as much as the pipeline trail as I could because hills. Hills are good for horse butts that need to be strengthened for cantering and climbing more hills for endurance.
It was overcast but not raining (that's today and the next 8 days). Pretty great weather, and ended up warming up more than I expected and the sun even came out a little bit!
The colors, while not as dramatic as the northeastern part of the country, were still in good form for the area, so it was a great fall trail ride. I also wanted to test my scoot boots with the gaiters I bought. 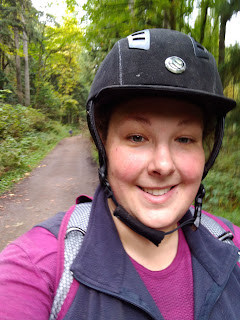 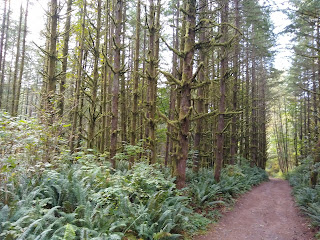 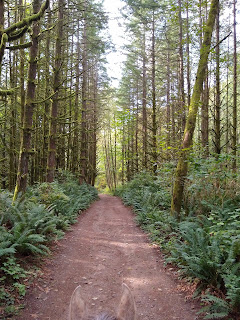 One thing that always eluded me was finding the river access point within the trail system. There's talk of removing horse access and count me selfish, I wanted to get on that trail before that happened. The trail was pretty much all down hill to the water. The parking lot is at the top of Lord Hill so there was a lot of downhill. The blackberries were trying to overtake the trail and it's not rider friendly since nothing is cleared well at my torso height. 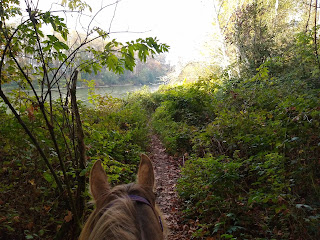 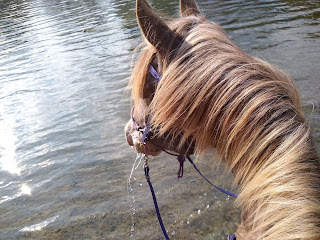 But it was a nice sandy shoreline on the river, which is pretty impressive given most of the time it's a ton of glacial till. 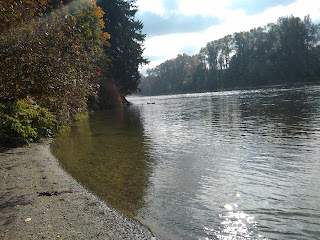 Gwyn wanted to go out deeper but I wasn't willing to let her. She got a good drink of water though. Then it was climbing back UP UP UP, which had Gwyn suddenly going "wait a fucking minute..." She tried pulling the stop and act tired on some of the minor stuff and I wasn't amused. She got short breaks and then we continued. There were nice peekaboo pops of color. 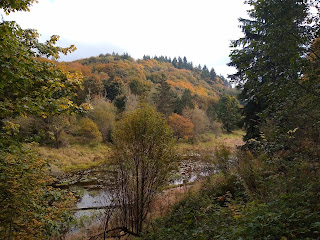 We did encounter quite a few hikers and bikers! Everyone was incredibly polite and followed the yielding rules, which I appreciated. Gwyn did really well with the bicyclists. We pretty much encountered them while they were climbing up hill so going quite slow, which helped her. She wasn't nearly as nervous about them as she's been in the past. She did seem to expect that everyone on the ground would have treats. 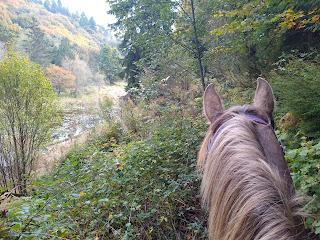 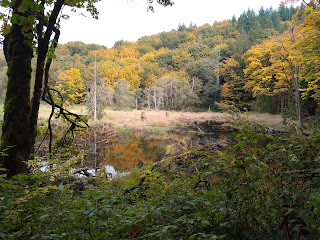 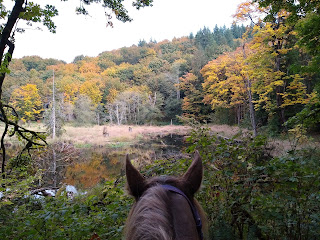 The pipeline starts from the quarry. I remembered that there was a side trail to avoid the first, steep part of the pipeline, and technically, while the trail is physically there, the maps have you take the side trail to get up the initial hill. I looked at the hill and thought, That looks doable.

Narrator: It... probably shouldn't have been doable.
Gwyn gamely started up the slope. She had to stop and blow, but with my urging would take a few more steps, then a few more. Then I started feeling her legs tremble. I looked up, I looked down. We were about a third of the way up.  At that point I realized this was likely not the best idea I've ever had but going down seemed more risky than continuing forward. So I hopped off Gwyn. We climbed that damn thing together, a few steps at a time. But by god it was amazing when we got to the top where it finally leveled off.
This horse is amazing, y'all. She was willing to try because I asked. She's a trooper. Some wonderful soul made sure there was a bench at the top of the hill so I sat on the bench because MY calves were protesting the thought of being in stirrups and I let Gwyn regen with the very nice grass all around us. The bench also served as a pretty good  mounting block.
I did realize though that I was running behind the time I'd told Eric I'd be done in so my other plans to do the whole pipeline were tossed and I just oriented to the most direct route back to parking. This, unfortunately, meant more pipeline climbing (but on less aggressive slopes...)  Gwyn was unwilling to trot at this point and I hadn't brought a whip. We made it back and I think she was pretty well recovered by the time we got near the trailer. 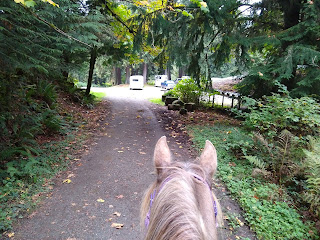 She was a sweaty girl and worked hard. I was pretty pleased with her. The scoot boots worked well too. I don't like how bulky these particular gaiters are, so I've ordered some DIY gaiter supplies that will be more targeted to the problem area. After a consultation with a scoot boot rep, it seems the rubs I did see were typical. We'll have the winter to dial in everything and make sure that a 15 mile ride won't cause issues (compared to the 6 I did on this ride)
Then on Monday I had my dressage lesson. There was a hot air balloon just taking off for a sunset/twilight flight as I was crossing the valley. 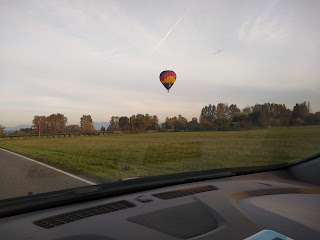 I was a little more frustrated with myself in this lesson. Pragmatically, I know I'm working to break my bad habits. And once I get it correct Gwyn moves wonderfully. She's fully capable. I just need to be more consistent. I just hate that I'm not better at it.

I need to ride from my seat more and get out of her face, like hauling on her face to slow her down. Doing that immediately causes her to giraffe. UGH. I need to practice. Though reading some other folks who have friesian crosses and seeing them work on similar concepts but at a higher level is oddly comforting. And knowing that if I can work on this now it will be better for us later makes me more determined to improve. 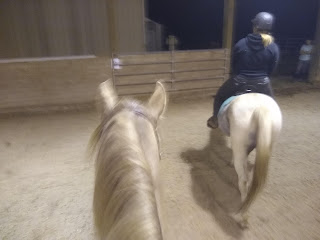 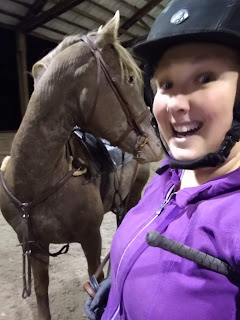