Equestrian's Institute out here often pulls in some clinicians throughout the year and Jim will attend them as part of  his continuing education credits to maintain his instructor certification. He always encourages his students to attend, and I was able to get a couple hours to join him on Sunday to watch Anne Gribbons.

The clinic was held at the most beautiful facility a mere ten minutes from the house. It's a dressage barn and is just plain fancy fancy fancy. They had a lovely deck overlooking the covered arena with a VERY nice heated observation lounge complete with full bathroom, full kitchen and conference room.

For EI members, attending would be free, I'm not one so I paid $25 for the day and it included lunch. Pretty decent deal. 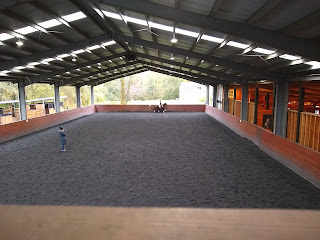 There was a wide variety of levels represented in the horses from Training (a 5 year old Hanoverian) up to I-2. Three of the horses had come up from Oregon who were all being trained by the same person and two were ridden by that trainer, and one by the owner. 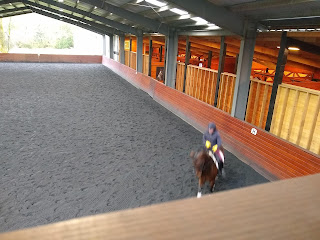 Clinics with Jim are interesting and informative because he's watching the horse and rider just as much as the clinician and sometimes gleaning a different conclusion  in how to handle the gaps he's seeing. Jim rarely attributes failings in movements to the horse, he's firmly in the 'the rider forms the horse' camp so we'd be seeing a horse be reticent in performing piaffe and Anne Gribbons was telling the rider to make the horse do A, B, C while Jim is whispering, "Look at her hands and upper body, she has no give on the horse's mouth to let the energy through, it's going to go up."  And sure enough, up goes the horse in protest as that fine balance in having the throughness was not struck.

After watching closely I was able to start to predict as well. And it made me reflect on the last clinic I watched, in Michigan, when piaffe and half steps were being taught and the horse was clearly also having issues.

In many of the horse/rider pairs, the answer was always more leg, to which I got an elbow and an "See? What have I been telling you?" stare from Jim (also something I work on, lol) . The young horse was the only one where Anne wanted the rider to use more half halts to bring him back and stop him from rushing. 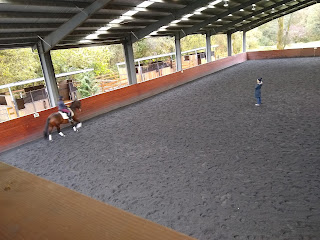 A shocking number of riders had terrible posture, their elbows were stiff and the movement from their lumbar back traveled all the way up to their head. These are all problems I'm dealing with as I correct all my bad habits from years of no lessons and it was a little shocking that they weren't being called out on those faults in their riding that could have allowed the horse to perform better. They looked like bobbleheads. It makes me want to go back and review the videos I took at WEG to watch the riders more closely and find the differences.

I went to ride that evening and tried to focus on that flexibility in my back where my head and shoulders remain stable, while my lower back moves.  I think I do better in that, though I was certainly not riding a sitting trot on a giant warmblood bred for GP dressage. However, there was a lot of stiffness even in the walk. One lady rode around looking like her shoulders were touching her ears the whole time and it was the strangest thing I've seen in a rider, much less someone who is apparently not an AA but Open.
Posted by Amy M at 11:01 AM

Email ThisBlogThis!Share to TwitterShare to FacebookShare to Pinterest
Labels: clinic, dressage, the rider forms the horse