What a weekend this turned out to be. The Pace was originally scheduled for Saturday. However, all day thunderstorms in the forecast had organizers postponing the ride to Sunday, instead of the previously mentioned postponment of the following weekend. This meant that a LOT of people were upset, especially the eventing crowd, because the Pace and the July Eventing Derby were now on the same day.

It also meant that Alicia couldn't come with me since she works on Sundays. So I was left without a team. My plan was to get there early and hopefully snag a spot on an open team (You ride in groups of 2-4).

Well, I got there early (and drove past the eventing derby on my way) and registered and let them know I was a single rider. Then I went and got tacked up. 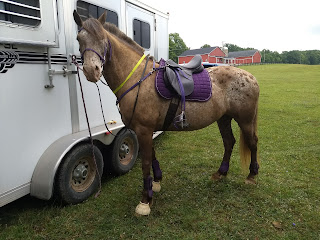 Gwyn was good to tack up, but then I started to leave and forgot my helmet. After retrieving it, I decided to use my tiny step stool and she didn't want to stand still and took off running across the hay field we were parked in. I hiked after her, found a better mounting block and got on there and rode to the start.  And just missed a group I could have ridden with.

Luckily, there was another person waiting for the rest of her group (she'd been dropped off since they only had a 2h trailer for 3 horses) to arrive. Her group rides regularly with the Hunt Club so it seemed like a good fit for me to jump in with and she was really nice!

So I hung out with Ashley and her gelding, who was super cute. The rain was misting and the promises of no rain on Sunday seemed to be fading, lol. 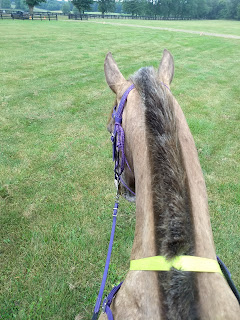 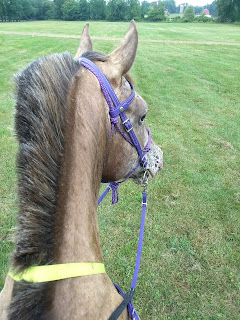 So I totally forgot my helmet cam, which I was cursing because I remembered as I pulled in to park. But I had to get done fairly quickly since I had to also run into work in the afternoon and get there before 2:10p  (thanks boss who quit for NOT putting the samples in late like I requested...) So no pictures from the trail since Endomondo quits working if I take my phone out to take a picture.

It was really nice trail though, take my word for it? All greenery and most of it was under trees so we could hear the rain hitting the leaves but we weren't getting too wet. There were some sections on dirt road and on field edges and that's where we tried to go faster to get back under the cover of the branches.

Gwyn led the whole time at a 12min/mile pace (5 mph). There were two Sherry stops and the landowners had snacks for us as well. Gwyn shared my rice krispy treat and twizzler. I thought I was setting a reasonable pace, slower than I would go on an endurance ride. According to my riding buddies it was a "blistering fast pace" and they were amazed at how much ground Gwyn's trot covered. Haha, oops? She's a powerhouse and really moves out on the trail. 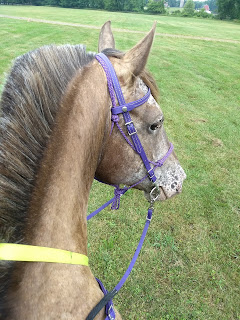 I practiced quiet cues for canter on the trail and made sure to ask for both leads. Gwyn was pretty good! I need to do this more. 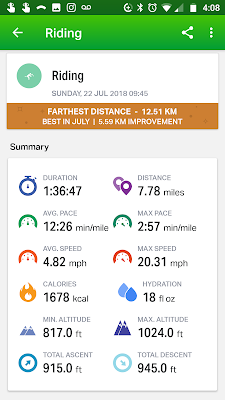 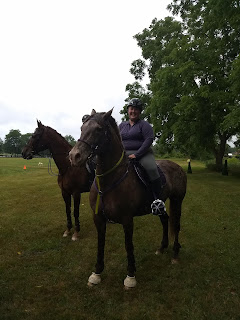 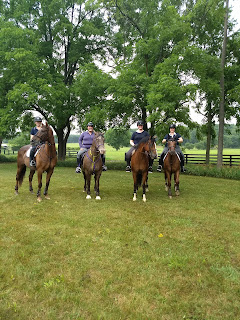 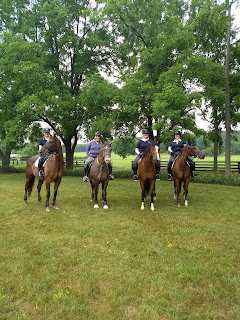 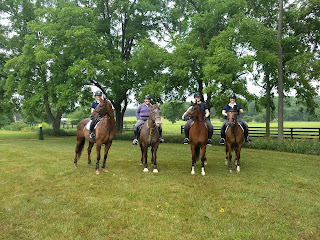 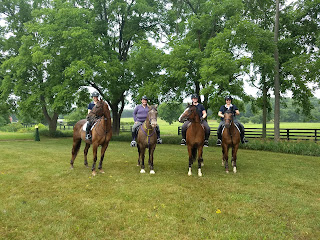 We'll see if we got optimum time. Honestly, given what Ashley told me about how we went faster than how the Hunt usually goes, I might just start trying for fastest time if 5mph avg is SO FAST.   ( I am rolling my eyes here)  Alicia should be going with me for the Fall Pace so I'll see if she wants to try for that.

Probably the best part was since it was cool weather (mid 60s, overcast and rain) there were NO BUGS!! All in all it was a great day. I also gave Ashley and her horse a ride home so they wouldn't have to play leapfrog trailer. It wasn't too much out of the way since she boards at Matador Farm in Oxford. I drive past that farm every day after I drop Kaylee off at school.
Posted by Amy M at 1:18 PM