On Sunday I gave Gwyn her first dose of Adequan and then it was just so bloody hot (and my Mom was here) that I didn't do much with Gwyn, but I felt better by telling myself that I was giving Gwyn some time off after her chiro adjustment and letting the adequan start its work.

Last night I went out to lunge. I've got the creeping crud but the weather has been SO NICE that I made myself go. It'll be hot again soon. As per usual, despite feeling like I could fall over and sleep once I was actually out and grooming and lunging I perked up quite a bit. I just grabbed my surcingle (need a new one) and my side reins (also falling apart) and switched out the sidepull for a baucher on my biothane bridle.

Almost immediately I noticed a difference. Gwyn was offering the canter very willingly and was much steadier and more balanced than she's been. There was clear separation and push in her hind feet placement and no bunny hopping until she sassed me and got too rushed and off balance. I was so paranoid watching the quality of her gaits.


I also had two trot poles but I need to finesse the distance. They were set up and then my 5 year old decided that rearranging my arena was totally an activity she should do while I was otherwise occupied. Oh kids.


After riding I hosed her off and fly sprayed her just in time for Eric to come out with Hazel. He wanted to finish moving the hay out of the trailer so that's what we did (because the weather was super conducive to moving bales of hay)


Once all the hay was gone, Saffron slowly made her way into the trailer to snatch up the leftovers. The last time she was on this trailer was when I brought her home and I just sat and watched her. I really want her to be able to load calmly and have good associations with the trailer so this was excellent! The one thing I read that I feel is really important about donkeys is that they remember. They've got an iron trap of a mind and if you've got a repeat bad association you're pretty much screwed with them ever thinking otherwise about a situation. 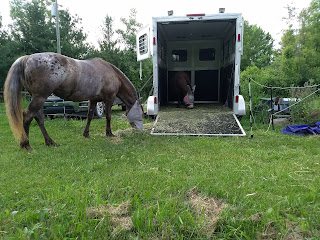 I also didn't want to leave them alone with the fence open like this. They are escape artists, these two!


Have a silly video of Saffron hanging out with me and Saffron.
Posted by Amy M at 1:03 PM