A visit to the equine hospital


So today was the lameness evaluation at Blue Water Equine Hospital. It's about a half hour away and has some nice facilities (though they need to replace their border fence....)  We started with some basic trot outs, then I lunged her so the vet could see the canter. Then she went through and did some flexion tests with more trot outs after each. After the last flexion though, the vet tech went to lunge Gwyn at a trot and the Goober reared her ugly head, ducked and yanked the lunge line and took off.  Her tail was flagged, and she basically said "Fuck all y'all, I am done being vetted in, it's time for the endurance ride"

The hospital staff took off after her in their vehicles while I felt helpless and a half mile away she finally deigned to be caught and then they walked back.


Apparently they had perimeter fencing but it got blown down in one of our windstorms.
The vet saw mild lameness and it wasn't consistent with the right hind like trainer Alison had seen. Vet also saw some soreness up front but nothing that couldn't be explained by doing trot outs on gravel. She also said that her hooves were nice and solid (despite the chipping stuff).
We moved on to x rays. They did her left front, left hock and right hock.

Are you ready for the results?

The damn mare has textbook perfect joints. No remodeling, no signs of arthritis. Her bones look beautiful, her joints have lovely spaces in them for synovial fluid. Nothing, nada. Zilch. Vet was laughing and said these are the best joints she's seen lately.

Vet recommended I give her some Adequan more as a preventative than a full on treatment. Then we did do a chiropractic session. Her SI joint was ALL out of sorts, which would also cause some of the issues we've been having. She's got a muscular butt but it seems her back and core need more work. Vet wants us to come back in 6 weeks for another chiro session but basically gave the go ahead to have me tell the trainer we can be pushed and that it's more behavioral and lack of proper muscling. I have been reading up on Sacroiliac Disease and I'm concerned that's more what we're looking at. Bonus, I don't need to buy any new BOT stuff because I have a rump rug I can use to target her SI already.

She also recommended front shoes as Gwyn's soles were not as thick as she'd like to see (based on xray). And was mildly intrigued/concerned that Gwyn has a yellowish tinge to her skin/mucous membranes. Now that she points it out I can see it but I think it's her normal.  There's a spot on her belly she wants me to keep an eye on, one that I've been slathering in swat but it might be a sarcoid and need to be removed.

So now I need to up my ground poles game and find a good place for walking hills. This might be a good excuse to go back to Ortonville Rec Area for some ambling trail rides! LOL. It's what the doctor ordered...

So anyway, that was a hit to the pocket book to find not much, but I'm glad I have baseline images so we can see if any changes do occur. 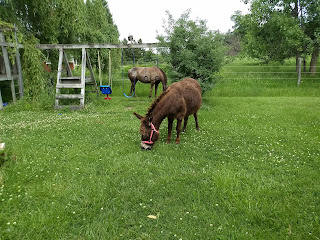 Also, let it be known that I tried to spoil my critters and let them eat down the ditch grass in our backyard which is hard to mow because it's a seasonal stream and instead they snubbed me and escaped and went for MORE gallivanting up to the neighbor's house and that was adrenaline pumping as I raced to get the ATV to retrieve them. They came back on their own. I have no idea where they escaped as my cobbled together fence was intact.

I suspect they went under. Damned animals. I wish I could completely fence off the property.
Posted by Amy M at 7:46 PM