Lesson Recap: The Positives and Places for Improvment

I messaged Alison yesterday to see when she could fit me into her schedule and she happened to have a morning spot open today! I snatched it up because why the heck not?

In rare form, Gwyn decided she didn't want to be caught, but once she was, she loaded straight into the trailer. It was about 15 minutes to the farm and I brought in the stuff I needed to tack her up. She was  really good about being in a new place.

The first thing she noticed was that Gwyn was weak in her right hind and it seems it might be an arthritic hock? It could explain why she wants to escape to the right, to avoid really stepping under herself  when tracking left at the canter. It also explains why she sort of hops her hind legs together in the canter even when lunging. It's why she runs into the canter and why we have a better canter to the right.

As a result, even though we finished out the lesson, we stuck to walk/trot and she recommended I sink money into a vet for now, rather than lessons, to get this sorted. And if I make her comfortable, she'll be so much better.

So that's the bad news first. The good news is that she really liked Gwyn's walk and trot. And it's a testament to her try-try-try absolute devotion to me that she does canter and work through it. Like damn. Break my heart with even more evidence how much this horse works for me.

So things we worked on unrelated to that but keeping that weak right hind in mind.

First off, it's either a dominance thing or possibly a pain avoidance, but she tries to grab the bit out of my hands, give her an automatic squeeze to bring her head back up. Half halt if she tries to go faster from the squeeze. If I'm consistent with the correction, she'll quit within a month. The goal is to have her ask nicely to work into contact, not try and drop and snatch the reins out of my hands. Even after about ten minutes she was not being rude about that as frequently as when we started.

She was working really well for me today and we did a lot of lateral work. Shoulder in, haunches in, side pass, turn on the forehand.

For all of this we treated Gwyn like a baby horse who was just being introduced to those movements.

So I started down the long side, asking for a leg yield into the quarter line and then used outside leg and outside rein to swing her hind end around and turn back and come the other way.

With shoulder in and haunches in, she emphasized that the movement was subtle and if you over emphasize it it becomes a side pass, which is not correct. Gwyn did REALLY well with this. And with this, my goal is to keep her head centered between her shoulders and ask for either and kind of let her drift. The drift is okay and it ends up working mentally for me in how I ask for the movement. We had the benefit of mirrors (which we haven't had for a long time!) and Gwyn was fascinated, lol. It definitely helped me make sure that our legs were lined up correctly for the movements. 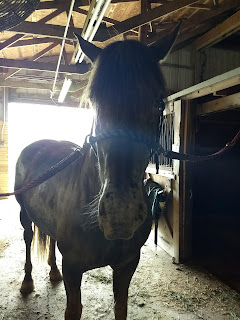 By the end her weakness had shifted to the left side, which would be expected if she were trying to compensate. She was tired too, though not that sweaty because our hot, humid weather finally broke and it was high 50s, low 60s to ride today. Absolutely perfect.

So now my next step is calling the vet out to do a lameness eval and see what our options are. And this only makes me more determined to continue my weight loss, to reduce the strain on her.

What have you done for stuff like this? I'm treading in unfamiliar water so I'll be reading up and making sure the vet verifies the same thing. We'll stick to mostly walk/trot I think and save cantering for the trail when it's not going to be on a turn and putting strain on her legs.

I'm open to anything, so supplements, boots, therapy for after rides, you name it. Throw it at me. I would give this mare the world if I could.