In Which I Was Late to Dinner

There's a lot of theory about whether horses should be on a schedule or not when it comes to feeding. I've read the pros and cons on each position and honestly I usually just do what works for me. And what works for me is a general evening feed. In the summer it's usually right after dinner and the kids all come out with me and we play outside too.

In the winter, it's been after the kids are in bed I bundle up for a trip out and the animals are fine until the next night while they root around for winter grass if there's snow. They've got plenty of water. Anyway, I'm justifying here. On to the story.

I might not go out at an exact time every night, but it is at night.   Also note: the winter pasture is behind the house and Saffron is bloody brilliant and has figured out that you can look into the house and see the humans.

So Saffron will see lights turn on as we move to different parts of the house and that's when it starts... 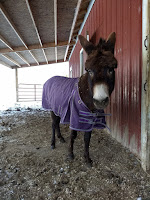 This bray echoes through Dryden. I know our neighbors hear it. Thankfully most of them find it amusing. Sometimes the neighbor donkey three lots down will answer.

Gwyn does not whinny for dinner. She will whinny when she hears a door open or sees me come outside, but she does not call for dinner unless a human has already appeared.

This brings us to tonight. It's cold, in the teens after being up near 50F and there's been an unexpected snowstorm. I am dragging getting ready to go outside. I spent more time than needed just laying next to a sleeping Hazel because I was warm, comfy and tired.

I hear a very plaintive whinny.

I get up and get ready. I hear another whinny. I open the slider door and the whinny is even more urgent.

I get into the barn and toss them each a flake of alfalfa since it's cold and I'm feeling guilty. Saffron sticks her head over the stall door (barely) and just BRAYS at me. It's loud, you guys. And in an enclosed space. I'm pretty sure she does this on purpose.

I told Gwyn we were going to trailer out to go ride tomorrow and she snorted dismissively at me. I tried to get a picture of her and all I could get was mare face.

So maybe we're on more of a schedule than I realized.
Posted by Amy M at 7:58 PM