Here's the recap from last year.

Attend 3 Limited Distance rides (Brighton in April, Metropark Express in August and Oak Leaf Run in October)
PARTIAL!  This is one I'm counting as a partial success. I did attend all three of those rides and I volunteered at all three. I rode the tutored Intro at Brighton, when I realized that Gwyn and I were no where near conditioned enough for an early season LD (and Brighton has a lot of up/down over and over, it's lovely!).  Metropark was a 1 day and I was recruited into timing with enthusiasm.  And Oak Leaf ended up being just miserable weather wise so while I did time and ride, my riding was still in volunteer capacity helping to take down trail markers.  Despite not fully making the goal, I'm pretty pleased with what I accomplished. I was still involved and that fulfills me even if I don't compete.

And of course, in trying to find the post from Metropark, I realized I never posted about it. Fail. So have the relevant media. 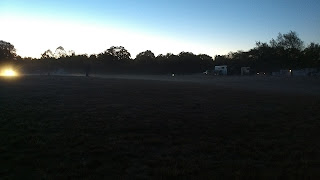 Prior Metropark versions were run in August and the time hadn't changed to reflect that it was now a full month and a half later and riders would be leaving in the dark. We had to delay everything by 15 min for safety. 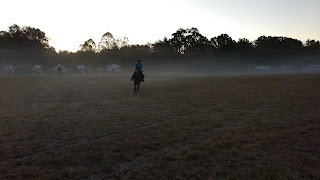 The mist was beautiful 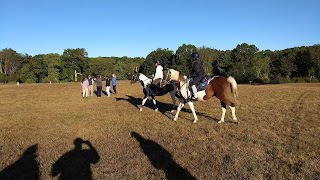 LD and Intro riders had some nice sunshine though! 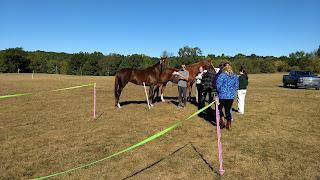 These thoroughbreds were fresh off the track and pretty much cantered the Intro and never looked worse for wear. After reading Dom's blog about how they're breezed, it makes total sense.... 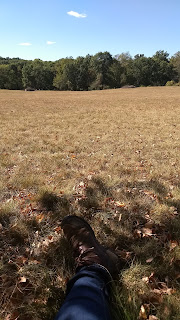 I had a glorious day. Clearly I worked hard (waiting for riders to come in)

1 Hunter Pace
SUCCESS!  Attended the fall hunter pace with friends and had a blast!School cross country at least once
SUCCESS!  I DID IT!  I found a trainer to accompany me on the course and I got a schooling lesson on the cross country course near home.  It was FANTASTIC. A+ Will go again this year.Trailer to or have a trainer come to the house for at least one lesson
SUCCESS!   Technically the cross country schooling counts but I ALSO got a lesson at home in November and then trailered to new trainer A in December. Both were fantastically productive lessons.In months where I don't have an event, trail ride at least once a month.
PARTIAL?  In January I just explored on foot. Nothing off property in February but footing is shit then. Got up into the field in March. April was Brighton, May I rode on Memorial Day at Addison Oaks and in June I had my xcountry school lesson. July was a bust due to travel with family and work suddenly getting crazy after my boss quit, August similarly suffered, as did September. I more than made up for it in October with the Pace and Oak Leaf. November and December were actually my most successful and productive with both lessons AND trail riding in the farm field. Get permission from landowners to ride on farm field perimeters
PARTIAL This is a partial. I got permission from ONE landowner. Specifically the Sheriff who owns one of the parcels. One landowner is a corporation that has no contact information or even exists that I can find. This remains a work in progress. I have decided, therefore, to not ride after planting (since it is used as a soybean field) and to respect any no trespassing signage. The field I ride around has no signs and includes the Sheriff's parcel.

For 2 day endurance events that I attend (Namely Oak Leaf and Brighton) volunteer for the Saturday and ride an LD on Sunday.
School Cross Country at least once
Attend one Eventing Derby at Starter level
Lesson once a month
Ride minimum twice a week, especially now that Hazel actually goes to bed nicely

Non-horse but Horse-Benefiting:
Walk/Run on my (new!) treadmill 3 days a week
C25K program to do 5k in April, 10k in December
Yoga 3x a week -OR- Rider Fitness exercises

I want to be stronger and more flexible in general