2022 has been a hell of a year. I look back at my 2019 long term plan and I was hoping to actually go to AECs this year. Ha.
Anyway, a series of unfortunate events between me and Cortney meant that we hadn't ridden together since the end of 2021. Her because of truck issues and then barn building and me because of surgery and lameness in Gwyn. Hell, we hadn't even seen each other but thankfully we have that friendship that memes are made for, where you pick up where you leave off, regardless of time apart.
So we made plans for Monday. She'd meet me at Bridle Trails with two horses and I would bail out of work for mental health sick time. 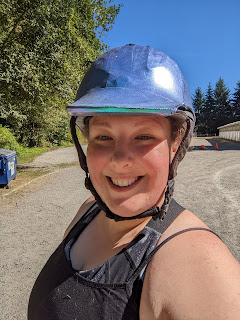 We're squarely in what I hope is the last heat wave for the PNW of the year and it was beautiful blue skies. Felt good to actually wear riding pants and a helmet for the first time in a long while. 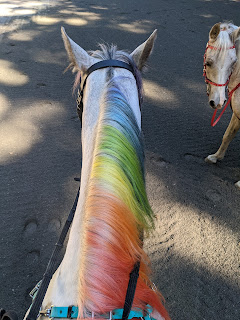 Cortney brought Reign and Splendid. Reign had recently been decked out for an endurance ride so I got to ride the Reignbow :D   Reign has matured quite a bit but is still young and hasn't had a variety of butts in the saddle. I also haven't been in the saddle for a while so we took a few minutes to calibrate to one another in one of the arenas at Bridle Trails. I wanted to make sure I knew her buttons and that she knew me. I also wanted to practice some of the things I've been doing in my pelvic floor physical therapy. My therapist has been hoping I get saddle time so we can see if I've improved. 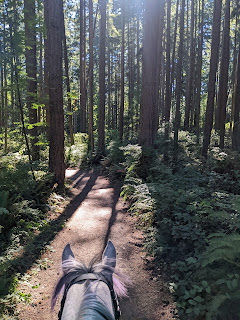 I always love Bridle Trails. It's a beautiful state park in the middle of a city. You can hear highway through almost the whole park but visually you feel like you're far away. These trails will be super ideal for Gwyn when we're allowed to do more (Spoiler: We have progress!) 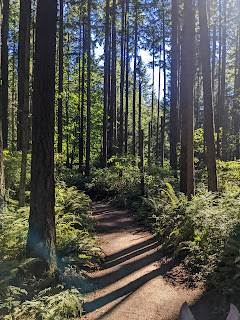 Bridle Trails also has four different riding arenas. Three are clustered together for shows and one is on the pipeline that bisects the park. This arena had a small jumping course set up so I took Reign for a spin around them, further exploding her little pony brain about all the different things you can do in one ride. 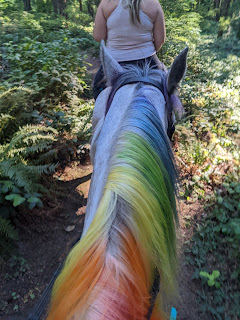 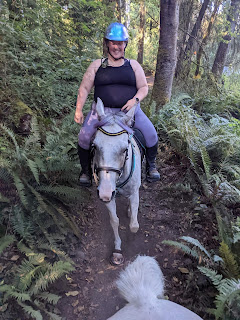 I also tried to keep my PT notes in mind while riding. I have a tendency to collapse my left side. I did pelvic tilts in the saddle thinking about drawing up in front and not using my back. I practiced my kegels. 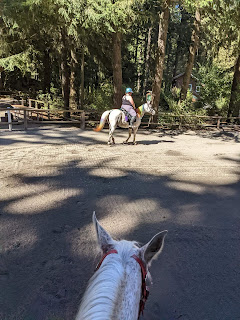 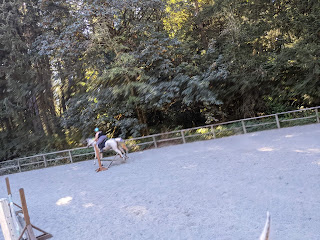 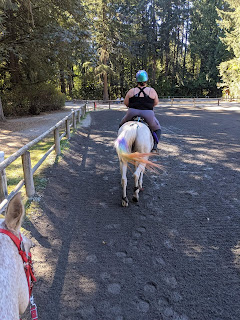 In some of the pictures Cortney took of me I do see the left side compression my therapists have noted. And I tried to be cognizant of when I felt my toes curling in my shoes. We did a long stretch of canter and despite my best efforts I did eventually feel bladder control go away. But we slowed down to let muscles rest. This just gives me renewed drive to keep at it though. I feel like I do have improvement and it felt so good to be in the saddle again regardless.
Cortney and I are already making plans for another outing.
Posted by Amy M at 10:27 AM