We've had an FDA audit at work for the past 9 days so my time has been pretty much spent at work and then sleeping. It's been exhausting. 11 days ago, Gwyn got more injections, this time in her hocks after the vet checked her again and agreed that the stifles were not a lone actor in her discomfort. 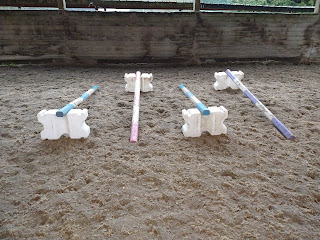 We did have a flat-ish lesson the day before where we worked on stifle strength and Gwyn was GREAT for it. That was the last time I had ridden my horse until today.
The vet was out for teeth and I wanted her to flex Gwyn again.

She was mostly sound except for after the left hock was pushed. It wasn't a hard decision to opt into injections. As much as I don't want to admit it, Gwyn is not a spring chicken any more. So maintenance it is.
She gets a recheck on Monday to see how she's going after injections and I'm pretty sure it's going to show some improvement. This is the first year I've done injections into the joint, she's gotten adequan before. Gwyn responds REALLY well to them according to the vet. She's an ideal candidate.
I went out to ride on Saturday as a bounce back after all the work I've been doing. My mental health definitely suffered but I honestly didn't have time. I was so exhausted after work each day and I put in some ridiculous hours to support the audit.

When I walked out to grab Gwyn, I didn't hear anything, but her nostrils fluttered as soon as she saw me.  And it felt like all my stress just lifted.
And then the little details just made me happy.


I had stopped at the co-op to grab more timothy pellets and saw a brilliant purple halter that was draft size. You better believe that immediately left with me, along with some coat defense powder.
Wisely, I tossed her into the covered arena before tacking up. As soon as I released her she took off and was just prancing around. And then immediately she was cantering around on her bad lead, but the correct lead and placing that left hind under her body.
Considering she has little to no musculature to properly support good cantering, I'm taking the screenshot below as a win. 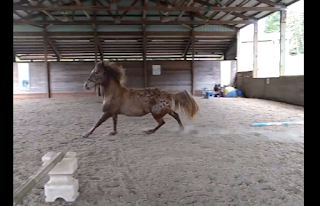 There was sun for a little bit that coincided with rain showers as I started my ride.  But as I continued, the sun disappeared and the rain showers lasted longer and longer until I gave up riding outside and went to the covered arena.
There was a cavaletti and a neat jumping exercise (the spider) set up. We walked over the cavaletti to work that hind end and tried the jumping exercise once. Otherwise, she was willingly offering me canter in both directions under saddle and I just tried to sit quietly and stay out of her way. I mostly practiced thinking toes up instead of heels down and I felt SO much more stable when applying leg aid. And it didn't feel like I was being popped out of the saddle at the canter so I don't know if that's from her not being so choppy due to the injections or the slight change I made in positioning. Either way, it's a good change.
I'm looking forward to seeing what the vet thinks on Monday. She'll get her teeth and vaccines done then.
Posted by Amy M at 12:03 PM