Balance is key, Gwyn will tell on me if I'm unbalanced.  If she tries to throw me to the outside, weight the opposite, make her balance herself.

That damn butt muscle, relax it

Tuck hips EVER so slightly without collapsing shoulders

Steer from hips/pelvic tilt, less is more, shoulders DO NOT follow

Sit back sit back SIT BACK!

Use the armpit muscle to steer, like holy shit, what... this works?!

Gwyn can do it, Gwyn WANTS to do it. Gwyn is happy when you ride WELL. Happy ears when you get it right/are balanced

Ralph and I are similar weights :0

I had one or two more lessons with Ralph. One attempt was waylaid by Gwyn still not being sound. It was so frustrating and part of the reason why I just stopped making posts. It was too depressing to open the 'create post' and only think, "Horse is still lame, I lunged her hoping there was a change and there wasn't so I didn't do anything but walk for 10 minutes" 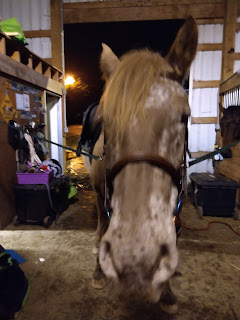 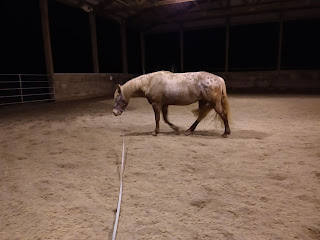 Gwyn sees the vet again tomorrow. She still does hinky things with her hip, several different people have commented on it but noted that it's not lameness but just her dropping her left hip. I suspect it's muscle memory from her compensating for the stifle for so long, but now I'm fucking paranoid.

We've been doing little except a dressage lesson here and there and lots of trail walking to try and build up her butt strength. 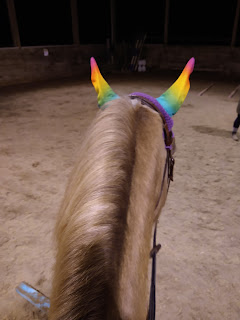 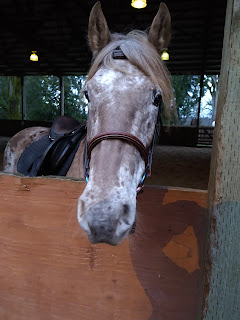 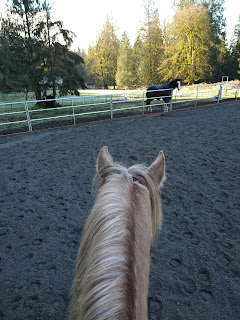 Anyway, that's slowly catching me up with you all. I'll get fully back to it at some point.
Posted by Amy M at 8:03 PM