Lessons have been more sporadic lately, though I did get a lesson in the Sunday after Thanksgiving at Bridle Trails. Traveling all the way up to me for Monday evening has been wearing on Jim and Cortney and I think we'll be rearranging lesson day to be daylight hours. As much as having them come to me was nice, I totally get that it's a rough drive to do weekly, at rush hour. Traffic is horrendous out here.

Combining the sporadic lessons with the holiday and then some mystery gastric thing I had, I haven't ridden much, and the last time I rode Gwyn I felt like a stiff board getting on and boy was that discouraging and I didn't make it out more. The Sunday lesson was early afternoon and a new friend, Robin, joined us. She's also an endurance rider that Cortney met and I definitely like her, she's a great person to hang out with. She came to Thanksgiving too!

Her gelding has been cleared for light riding after an injury, so she joined us at Bridle Trails. We planned on a 1pm meet time that of course I ended up biffing when I found my truck tire was low on air AND there was a line at the gas station for using the air pump.

Because I'd been so stiff last time I rode I made sure I stretched my hip flexors before getting on. Note to self, do that before putting on spurs. Lesson learned.
Gwyn was a bit sassy to start off so I made sure to lunge (see aforementioned over a week off and nice cool weather). Lunging I found she's able to maintain a balanced canter for a lot longer, which is really encouraging. It doesn't even get strung out and flat. I'm really excited for when that translates under saddle. Her brain seemed relatively well screwed in so I hopped on. 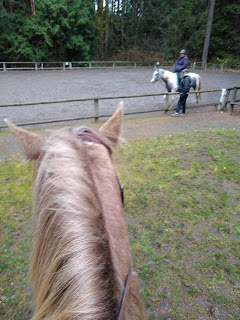 Jim's lessons involve theory as well as practical application. So we have occasional huddles to talk about why movements are useful and how different aids work. Gwyn and I even did some canter under saddle and her good direction was really good!

He and I discussed her weakness in the canter is because we need to strengthen the hind leg that pushes off into the canter. Her weak direction is to the left/counter clockwise, so that's her right hind that needs strengthening work.

Turns on the forehand work on strength in that same leg as you ask them to step under themselves. This is reflected in how her better turns are when we turn counter clockwise because it's the left hind stepping under itself.

Additionally, I need to think of exercises like turn on the forehand as a weight lifting exercise. I shouldn't be schooling it endlessly because like with weightlifting, eventually you hit exhaustion where the muscles just can't perform anymore. I need to come into it with a sets and reps mindset.  So do a quarter to half turn, then move forward to reward, relax and encourage the downward stretch. Then repeat a little bit later. 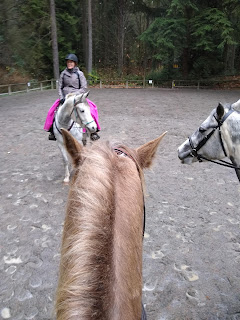 We also practiced our square halts and feeling where the horse is standing without looking and once identified, fixing the halt stance. If I focus on it, I correctly identify her stance 9 out of 10 times. I found that since we were in a dressage arena, if I practiced my halts as though I were in a dressage test by going down the center line, it gave me a target point to halt at and my preparation for halts were much smoother. We ended with a really good, square halt and I was really proud. 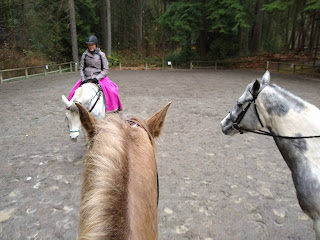 After our lesson we hit the trails together. It had been raining through the lesson but the trails are amazingly well groomed and had minimal mud. We kept it to a walk and did between 3 and 4 miles in about an hour. 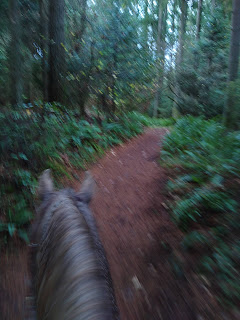 Time in the woods, even if a bit wet and cloudy, was so good. And it was in the best company. Cortney told me she had friends waiting for me, and she was right, hahah. 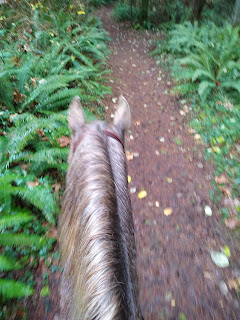 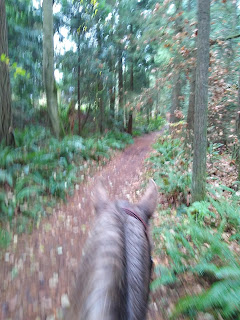 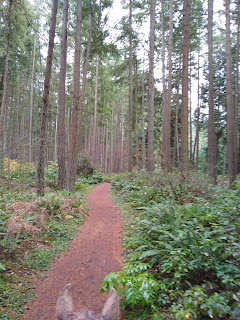 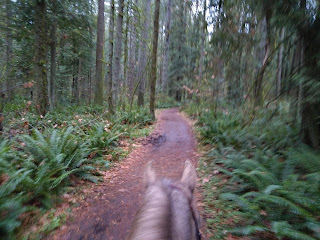 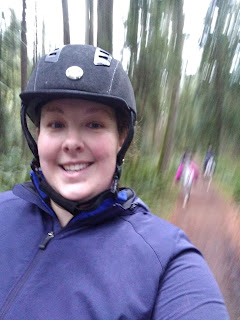 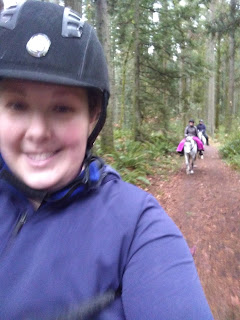 I didn't get home until after sunset (4pm this time of year, lol) Then I just hung out at the barn chatting with folks. I like having this social aspect again. That was definitely something I didn't realize I'd miss as much when we got our own place in Michigan.
Posted by Amy M at 1:01 PM