On Saturday Alicia and I made plans to go trail riding. We didn't have much of a goal in mind other than get the horses in shape for the endurance rides we were planning on doing this fall. Plans were equally compounded by Gwyn still not having a shoe on one of her front feet plus the velcro stickers were loose on her feet so I had just pulled it off so the Megasus were out of the question. My farrier is coming Monday and I didn't feel like wasting a velcro thinger for a day. My goal was to go to a place where the footing wouldn't negatively effect Gwyn.

Highlights from my helmet cam

Wolcott Mill seemed good. While it would be fairly boring as it's just farm field edge riding with some woods it's also pretty well groomed as it's one of the few places that's good for people to come and use their carriages. It's nice and wide and mowed. The last time I was there was in 2015. I was hoping it wouldn't be as muddy as last time since we've been lacking some regular rain lately.

Right away, the horse flies decided to be horrendous. They were the giant ones, big black, the size of a fingernail and not your pinky unless you have humongo hands. They drove Gwyn absolutely mad. They really liked landing on her butt, right in the little dip on her spine where she couldn't reach with her tail. She figured out that if she bucked it would flip her tail up and over to swish at them but honestly I just tried to smack them as much as possible. The fuckers would dodge as soon as they saw my hand.

So this ride was characterized by a TON of bucking and kicking on Gwyn's part, while she was being perfectly behaved. Several times she broke into a trot just to try to escape them. So noted, Gwyn. We will not do Wolcott again in the summer. We'll wait for fall when the bugs are dead. The deer flies were equally bad but not as maddening. Fly spray did nothing. 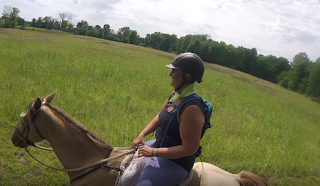 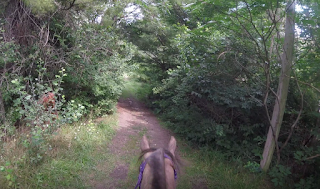 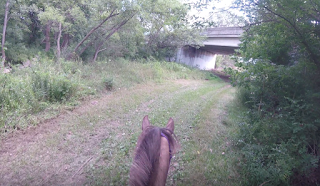 The parking is on the north side of 29 mile road but all of the trails are on the south side. So rather than cross a sometimes busy mile road, we go under it! 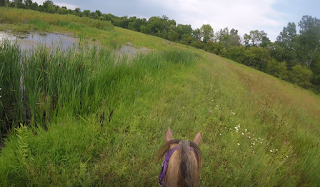 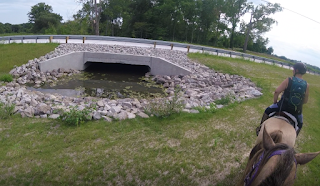 We started hearing thunder at this point in the ride and shrugged it off. The storm seemed fairly distant. 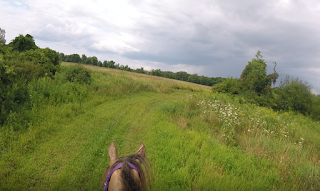 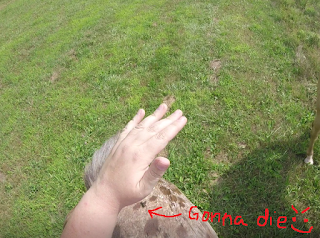 It was right around this time that we saw lightning and suddenly getting back to the trailers was urgent. 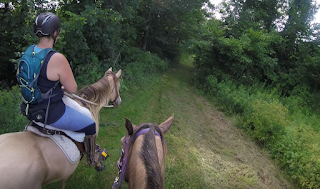 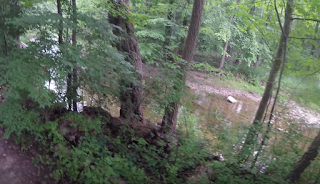