The Rider Forms the Horsee

Back when I started riding with Jim in Washington, he gave me a book to read. It was pretty dry, but ended up being very informative of the theory behind the lessons I got from him. I regret not blogging more thoroughly about my lessons with him, as he was an excellent teacher. After we all left the first barn and I moved north and he moved south with horses, it became harder to get him to me for a lesson and very expensive with travel compensation thrown in.

Anyway, he liked to say that the rider forms the horse. Everything we do as a rider is conveyed to the movement of the horse in some way. The trainer that I'm working with now has the same philosophy. I had my second lesson today and I'm hoping this marks the start of a breakthrough.

Some history:
I have had a recurring issue with Gwyn. She does not like to turn left and the faster we're traveling, the more she resists the bend. Not so much on the trail, but enough that when I attempted a dressage test that involved cantering, we ended up outside the ring on our counter clockwise canter circle. It was a disaster. This one issue is why I haven't attempted to really do serious showing because what's the point until I fix our left turning problem? When she spooks, she spooks to the right. If we're turning on a jump course, she doesn't want to go left. She drops her shoulder a lot when we do left circles. You get the picture.

At first I thought it was somehow related to her snakebite or eye damage (all on the left side of her face). Then I thought it was because I wasn't strong enough creating wall with my right leg. But nothing I could think of was fixing it. And so until I could get us both back in regular riding and budget in regular lessons, we focused on trail stuff where turning left really isn't that big of an issue when your horse is willing to follow a trail regardless.

Today, I traveled to the trainer's place. There is a $25 difference to trailer to her versus having her come to me. I live maybe 2 minutes away. It's worth the $25 savings. Eventually I will ride to her, which she says is possible. I decided to make sure that loading would be stress free and set up a temporary pen around the trailer. Gwyn has always loaded really well when I provide a barrier like that. She did balk briefly but I brought her around again walked her up to the entrance to the trailer and the damn mare self loaded like a pro. I made sure Saffron had some hay to munch on while we were gone since I was keeping her in the dry lot, which is harder to escape from, and off we went.

I got there as her previous lesson was finishing (which I knew about).  Gwyn was very up and alert. I tacked her up without issue and went back to their winter riding area for the lesson. Trainer does have an outdoor sand ring but waits for the ground to freeze before using it so that there aren't a ridiculous amount of ruts and potholes.

Trainer started with groundwork and reinforcing the giving to pressure and standing quietly as a reward and release. Every time Gwyn wanted to get 'up' and giraffey about the other horses she had to move her feet. Within a few minutes she was standing very still, head low and foot cocked when she wasn't being asked to move. Then it was my turn. I need to remember palm down and release. I'm in the habit of getting into a battle of strength with her and I shouldn't be.

Then it was time to hop on and we worked on having Gwyn stand still after I mount, which is admittedly, a bad habit that I've allowed for a while.  So I got on and off a few times. If I got on and she walked off, we immediately backed up and she had to stand still. Then we worked on me fiddling with my stirrups for a bit and making sure her feet didn't move until my feet were in the stirrups. This will be something I need to work on at home.

Then it was back to working on the 90degree turns and my position and I told her what I was practicing at home. I get very bracy which makes Gwyn really bracy and it's all a hot mess. I do really well looking where we're turning but instead of lifting my rein for turning, I open my hand and keep it low, which doesn't help Gwyn turn. This is slightly different from how Jim had me working with Gwyn, which was with that leading rein. I'm getting better results with the raised inside  rein.

So all those damn issues seem to stem from me. And goddamn if that isn't relieving, LOL. I can work on myself, I can do excercises to limber myself up and strengthen that left side.

And the rider forms the goddamn horse.

After that we worked on lightening the halt with a trot, halt, stand, back up, trot on exercise. My goal was to not haul on her mouth. I sit back well enough for the halt but I pull on her mouth too much. My goal is to be lifting my hands not pulling back. And you know, as soon as I started doing that I got light, on contact, square and nearly prompt halts from Gwyn.

We ended on a very good note with a light, responsive and balanced halt. I untacked and Gwyn self loaded once again. I'm hoping with these monthly lessons that the repetition of positive loading experiences will just cement in her and this will become consistent. 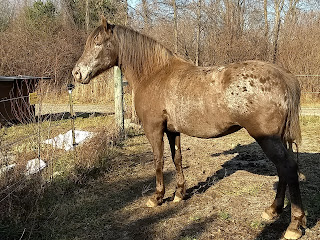 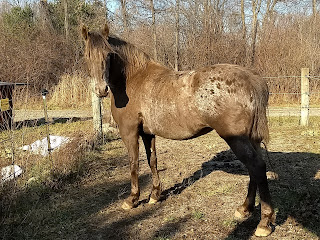