Three rides over the past week and a half


I've been able to ride three times since we've moved, all of them short, and most have been good. I'm still trying to find my stride with how I want things to flow in the barn with Gwyn and the donkeys and dealing with herd bound critters.

I haven't yet written about how Gwyn settled in when I first moved her. I trailered her up on Friday, June 26th, almost two weeks ago now. She came off the trailer well, but definitely 'up'. I let her out in the back pasture and she was very spooky. She took off exploring the pasture and was very clingy when she didn't see any other animals.

My original plan had been to pick up her new herd the next day, but when we started to leave to get a load of stuff from Algonac she FLIPPED the fuck out when she saw the truck and trailer pull out of the driveway.

There was no way I was leaving her alone, unsupervised. I stayed with her, while Eric headed back but then he called and suggested I just get the donkeys. I called their owner, he was able to get home when I would get there, and Eric stayed with Gwyn to keep an eye on her.

So off I went, solo, to pick up two barely handled donkeys. The divider had been taken out of the trailer at this point so I figured they would be fine riding relatively loose

They loaded quickly, but not willingly, and as I drove back on terrible Michigan roads I was apologizing, out loud with every jarring bump, for putting them through that.

Eric was waiting when I got back and he took the older donkey while I took the baby and we brought them into the pasture. I called Gwyn over and she freaked out AGAIN. Because she'd never seen a donkey.

She really wasn't sure what the hell to do, what they were, or what they meant. They were already used to being around horses so they just trotted right up to her "Oh! Hi new herdmate!"  Then momma donkey decided that she was going to be boss mare and Gwyn suddenly got her wits about her and went "Oh heeeeell no!"

They had a bit of a spat for a few days but now I think Gwyn is on top, just barely, with momma donkey a close second and baby last. Baby and Gwyn get along best, Momma is aloof and would prefer to protect baby all the time.

Baby, I should mention, is a bit over a year old, she was born at the end of April last year. She's been kind of handled, but not nearly enough as she should be, and I suspect was never fully weaned from Momma to break that co-dependency.

Baby has been dubbed Arwen, after the elf of LOTR fame and Momma is Saffron, after the conniving lady who con-married Malcolm Reynolds in Firefly/Serenity.

Doing a proper pasture rotation is a challenge since I can't lead two at a time. Both Arwen and Saffron do not lead well and that will be a project to work on. They're also suspicious of treats. I doubt they received many. Arwen's hooves will need to be trimmed shortly so I need to get the number of the farrier who had been trimming them last (the same one who told me they were free)  The importance of leading became very apparent when we had an awful thunderstorm. I was able to get Gwyn inside but only had safety to do her. The other two didn't follow. Gwyn was not happy about that, but I stayed with her to wait the storm passing.

Good thing I did because I learned that in flash flood circumstances the barn fills up with several inches of water, over the tops of my thankfully rubber booted feet. It does not flood in the hay storage area, but actually comes in from under the foundation. Crazy. I suspect, also, because of the way the stalls were designed is why the stalls only barely got wet at the very end.

Once I was counting to 15 one thousands + between thunder rumblings I let Gwyn go and she of course ran right back out to be with the donkeys. 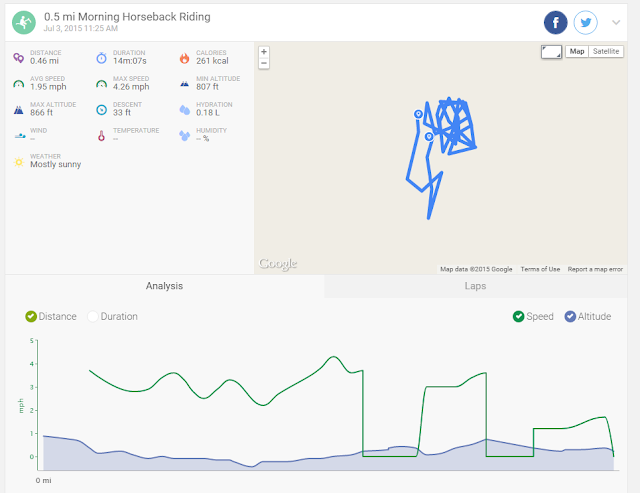 This was the second ride. My parents were still in town from Kaylee's birthday party. Kaylee really wanted to ride so I tacked up and she got to sit up on Gwyn for a bit, then I hopped on. Gwyn felt weird. Off. Hence the short duration and distance. When I hopped off I noticed she had a tiny abscess that had already blown up by her coronet band. Great.  I lunged her for a little bit to see if she was truly off but couldn't see anything other than the odd head bobble. There was no heat in any of her hooves and I untacked and put her back out in the field. It was at this point that I moved them off the back, rich pasture and into the front hot grasses pasture and shut the gate. If given the choice, everyone was hanging out in the stalls and eating all the alfalfa grass that's supposed to be for fall and spring. My front pastures are the summer ones. Again, because of the lack of leading issue, I've just been letting them stay out 24/7 because the weather has been decent and they have trees for shade.

I really feel like I'm doing this whole thing by the seat of my pants. I thought I was prepared. I feel less prepared for this than I did for being a parent and they say you are never ready to be a parent. 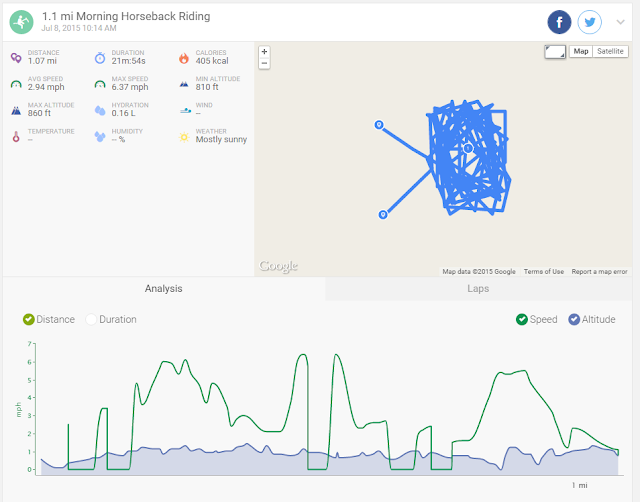 Third ride! On this one I lunged first and there was no weirdness. I couldn't even see the spot where she'd popped the abscess. I hopped on and she was moving fine, even though the arena was a bit wet from the rain. I had bought pvc poles for jumping and set up a line of low poles and a line of slightly raised poles. Arwen joined us in the arena and her mother did not. I closed the gate because Gwyn started dropping her shoulder to escape out the open gate and that's a habit I'm nipping in the bud.

It was adorable watching this tiny donkey go over my trot poles. ADORABLE. We did just over a mile and I called that good for the day since I wanted to get a few other things done before picking Kaylee up from Gymnastics camp.