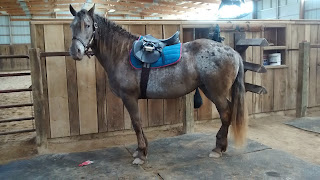 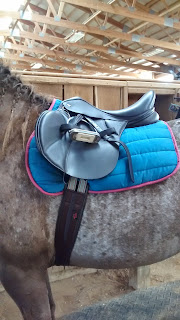 I tried my new girth last night and determined that in my effort to compensate for one side now lacking in elastics, I ordered too large a size. I use a 48 girth on her when it was double elastic. This is a 52 and was nearly to the top holes on either side. Thankfully SmartPak has an awesome return/exchange system so back it goes. I'm going to try a 50 next.

I do love this girth already though. It'll be easy maintenance and while it doesn't match browns with my saddle despite both being brown Thorowgood products, I'll be close enough from far away in a show ring.

My Thorowgood stirrup leathers are still on backorder and won't ship until JUNE. Ugh. :(   I thought I had snagged a pair in time.

Gwyn was good last night though. She was lazy in the ring when I attempted a free lunge after setting up more ground poles so I just hopped on without expending much effort chasing her around and preventing her from eating grass at the edges. She was not very forward, just a little lazy instead but did offer a nice canter.

Her head felt in the right place so we worked on cantering all the way around the big arena. She can do it without me, multiple times, but tonight she was resistant to doing more than one full round. I should have brought a whip to encourage because she was also stubbornly being dead to my leg and heel as I felt her lose steam.

I'm still pretty happy, we even managed to canter over one of the poles in the middle. Her steering is getting more manageable and I felt like tonight was a huge step forward. It'll be okay if we have step backs after this, but I'm really happy to have seen progress with the two of us. It keeps me encouraged! I feel too, that this is a moment where if I work on me outside of the times that I ride Gwyn, Gwyn will improve.

And I am working on me! Eric did a 30 minute pilates session with me earlier today and that shit is all inside/outside leg muscles and core. I'm definitely seeing deficiencies in my own strength that need to be addressed and I plan to address them. I've also started calorie tracking on MyFitnessPal and just BARELY came under my calorie limit thanks to my exercising yesterday. I need to be better with food. Hopefully MFP will encourage that behavior. I need to lose weight. I also need to start running because oh god, when you hear the next two videos I'm likely to post you're going to hear a panting fatty. That needs to improve. 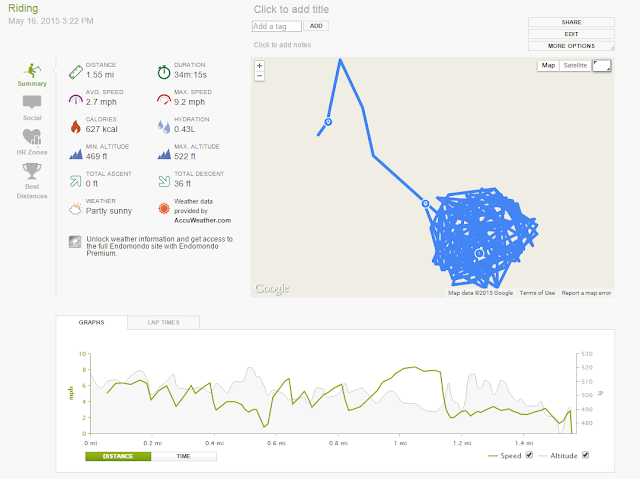 This was taken on my phone while we tried chasing the killdeer that nested in the arena (I know I know, I'm mean...)  But Gwyn again offered a nice canter so I'm one handed trying to steer and hold the phone. It's shaky. I'm sorry.