Ralph is our local FEI gold medalist trainer that Trainer ED will have over for clinics. BO Allison decided to have him come to our barn for a full day clinic since everyone wanted to ride with him. The clinic fee included free food and auditing the other participants. It was a surprisingly pleasant day considering it was supposed to be rainy.
Gwyn had been put out in the paddock close to the barn in anticipation of me riding in the clinic. This proved to be less than ideal since her buddies came to her and that was novel and she was excited. 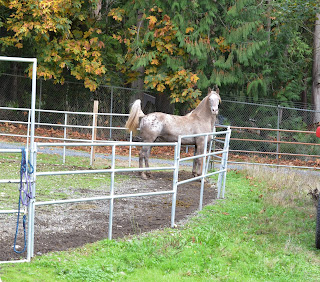 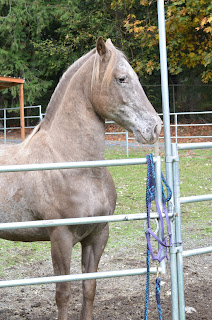 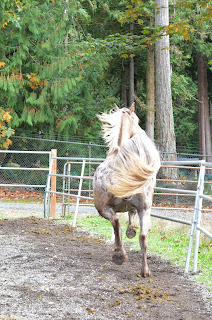 Thanks to her gallivanting about, I put her in the cross ties earlier than I intended but not too early. I took my time getting ready. 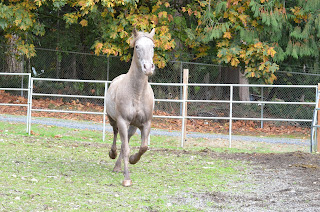 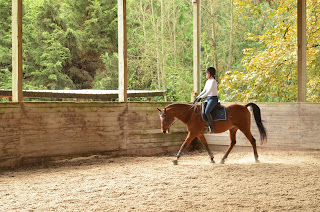 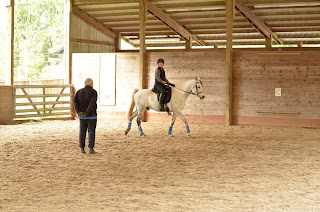 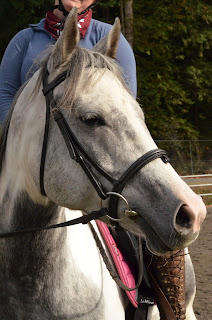 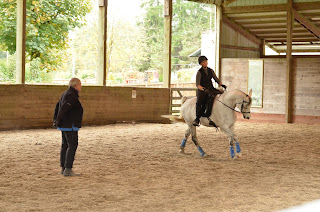 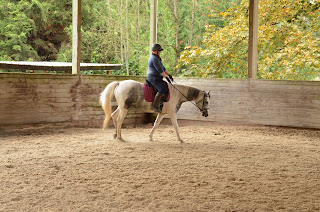 I did a good walk warm up and Gwyn was moving well to my senses. Ralph had me give him a brief history of me and Gwyn and what we wanted to focus on. I told him what we've been struggling with and some recent things that seem to help (namely, focusing on weighting my stirrups evenly despite it feeling off kilter). He had me pause and walked around Gwyn and I, had me lower my left stirrup one hole.
Suddenly things felt better. It was SO strange. 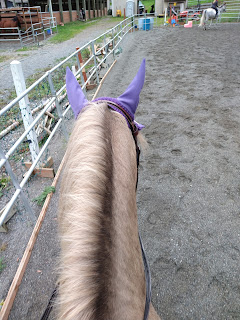 But then, as we picked up the trot in front of the clinician, he thought she was stepping weird. A bit more confirmed, she was NQR in the hind end, on the left side. He felt on the inside of her leg and found a huge knot in her muscle.
Ralph thought it better to not stress the muscle if she had pulled it (and she was being an idiot in turn out) because we'd be making her work correctly and it could hurt her more. I agreed, how could I not!? and hopped off. He showed me where it was. I could feel it. 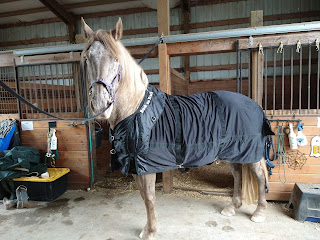 I'm just dejected and frustrated right now. I'm second guessing everything we've done since mid August when this first popped up. I let her marinate in her BoT sheet. I REALLY wanted to ride with Ralph. I think his knowledge will be really helpful for me. I listened to the other lessons and gah. 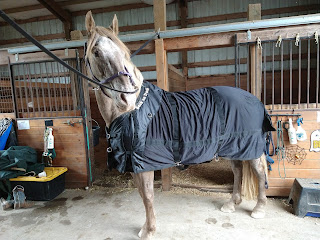 Instead I massaged the heck out of the knot for her. 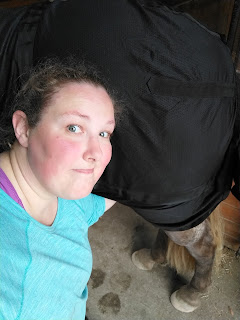 And I let her clean up the hay that Faheed and Reign dropped. 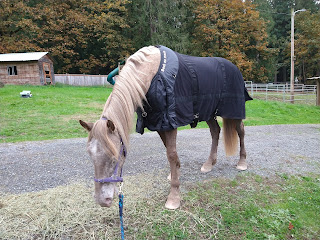 And so I gave her more time off and what riding I did do I kept to a walk under saddle and just kept evaluating her on the lunge line. And her strength in stepping under herself waxed and waned within the same session. So she's not working that left hind consistently. 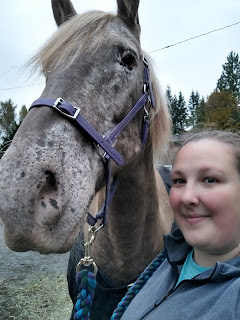 But she got a new waterproof sheet since mine are not holding waterproofness well. 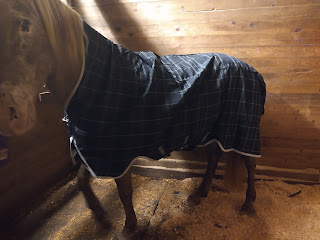 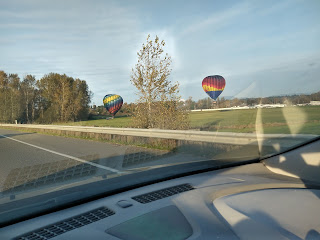 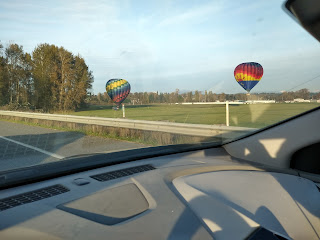 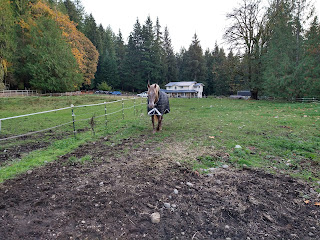 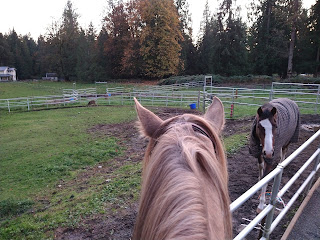 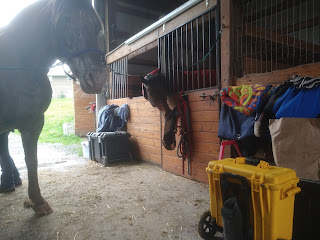 And I finally got the bodyworker out. The under leg knot had long been worked out, but I wanted her hands on Gwyn to see what she could find.
Her left hamstring was extremely tight. She had compensating tightness in her right back (bodyworker expected right shoulder) 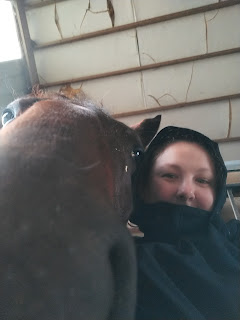 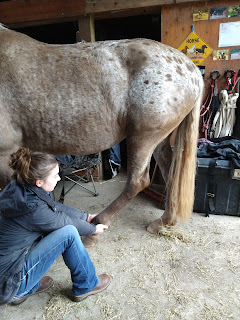 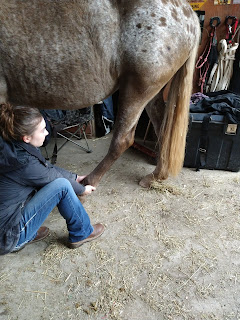 Relaxing into the stretch and releasing 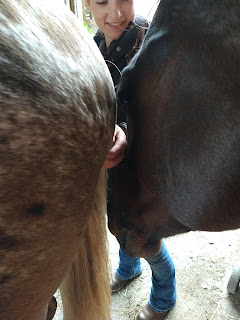 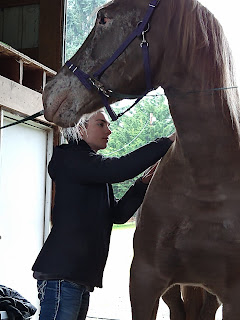 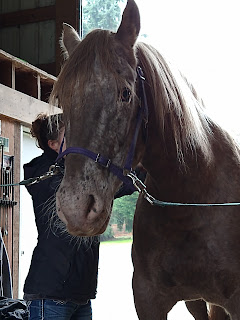 I took election day off for the bodyworker. That was a good plan all around. Plus I wanted to see and feel and make sure I had homework to do with Gwyn to keep her body feeling good. I don't know what else I can do if it's muscle related other than time off and bodywork. I looked into supplements and I'm pretty sure she's on CalTrace + in which case it has the muscle supplement levels handled. I'm not sure a supplement is the magic wand I'd want it to be anyway. 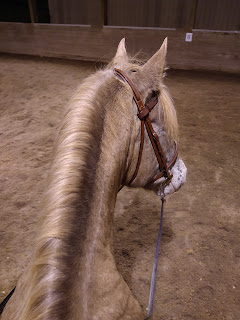 And both before the ride and after the ride, she got some massage and stretches. Plus organic carrots because they came with carrot tops and I could give those to the bunny at home. 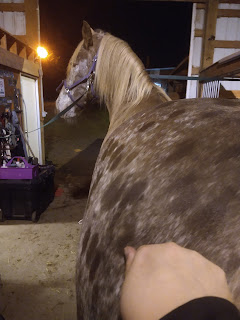 So I hope this works. Because I'm hoping to take more lessons and clinics through the winter. And I'll make sure to advocate for things to be gentle with this in mind.
Posted by Amy M at 9:37 PM