The ride that wasn't

So last we left off on our intrepid adventure, I was packed and ready for Ride the Loup, at Loup  Loup Ski Bowl near Twisp/Okanagan, WA. It's an EDRA ride (Equine Distance Riding Association) and set at 4000 ft elevation. Camp was in the parking lot of a ski lodge and we had access to the ski lodge AND heated bathroom with flush toilets! Luxury!

As the weekend approached there were lots of weather warnings for an unseasonal storm forecast to hit Friday night and last over the weekend that would bring snow, not usual this early in fall, even at that elevation in the Cascades. Rain? Absolutely normal, but the cold temperatures that accompanied this system meant snow. 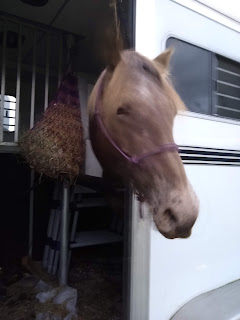 Regardless, we were determined! I packed for every weather eventuality, but especially for snow. I met Cortney and her mom along I-90 close to Snoqualmie Pass and we caravaned up to ride camp together. In retrospect, I would have preferred to meet them along Route 2 but now I feel a bit more confident driving out there. The safety blanket of following them was perfect. 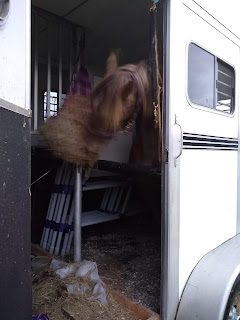 Western washington was chill and rainy, but as we crossed Snoqualmie pass the skies cleared and our drive north, on the eastern side, was pleasant. The weather on arriving into camp was low 60s and sunny. As we set up, Cortney and I slowly stripped layers until we were both in t-shirts. It was beautiful weather.
We essentially combined our ride camps. Gwyn got the space between both trailers which worked out really well. She had a lot of space in her pen. Amira and her buddy Snoopy were on the other side and they could see each other.

Once most of our camp site was set up, Cortney and I set out to stretch our legs on the trail and do the initial trail out of camp. Both horses were confident and sassy. The fall colors were brilliant against the evergreens. We weren't the only ones out riding either. 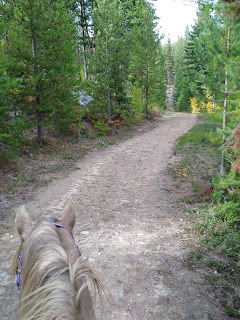 This is my first EDRA ride, though I'm fairly confident I've ridden with several of the people here before when I attended my very first endurance ride in Spokane. I like EDRA as an organization from what I've seen and really appreciate the way things have been set up to track rider and horse mileage. Their rules and decision making processes were put to the test this weekend and it shone.

For those unfamiliar, there was a split from AERC and EDRA was born out of that division. There is a history there that I watched unfold from Michigan. The folks I met have been absolutely stellar. 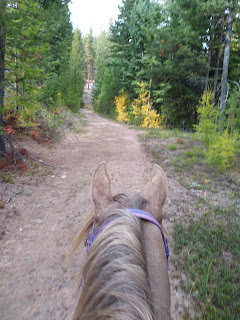 There was a tailing clinic that I didn't attend in favor of amazing chili dinner made by Trudy and then the rider meeting were we went over the trail (sounded challenging but fun!) and the alternative options that might occur depending on the weather. We departed with a promise to have another rider meeting at 6:30am the next day to determine the action plan.

As we left the lodge, it started raining. And gradually, near 9pm, that rain turned to snow. I was planning on camping in my trailer again like I did in Michigan, but the siren song of a heated camper, even if it was a shared bed with Trudy, was too strong to resist, and I moved a blanket and pillow in, along with all my clothes, relishing in the warmth. I was able to sleep in a camisole and leggings, rather than my typical bajillion layers that assure warm sleep in freezing weather.
Cortney was planning on riding the 50 and would be leaving first, 7am originally but that got pushed to 7:30 at the meeting the night before to account for the morning planning session. We all woke up with her and looked outside to see a blanket of white across camp. It was still snowing. The condition for the ride proceeding as planned had not been met. Snow was there, so rider meeting at 6:30 was on.

We bundled up and headed to the lodge where coffee and small breakfast items were available for everyone.  Then we got the bad news.

One of the volunteers had gone out to scout the trail to the first set of water troughs, about 5 miles in, on ATV. He had not returned yet, which did not bode well. As the meeting progressed he did come back. There were downed trees everywhere due to snow weight, trail markers were gone, pulled down again from snow, and all hazards were no longer identifiable as they had been marked with lime... 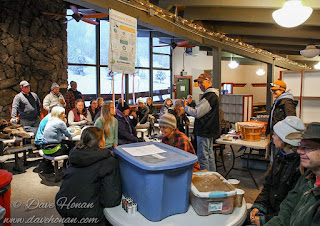 The ATV was struggling on the trails. Ride managers determined that the trail was challenging enough without snow, and now the rescue vehicle that would be used to get emergency personnel out in the event of an emergency couldn't get out? The folks who regularly ride the trails were getting lost and couldn't find the trail?

Nope, not happening. They were so safety conscious this whole time, and incredibly transparent and open about the issues being discussed. They already suspected that plans were going to change because we weren't required to pay up front. We would pay, and they would record, only what we would have ridden. So if the 50s could only do 30, they would only pay for 30 if the ride managers had to shorten it.

What a difference 24 hours makes. Terry James, ride manager, had to make the hard decision to cancel Ride the Loup. He was up at 1:30 am checking trails—it had been gorgeous all week and we were all hoping the forecast of snow would hold off. However, when it became apparent that emergency vehicles could not get up trails in case of a wreck, when trees were breaking under the weight of snow, and horses were snowballing walking through camp— it was obvious. Still hard. Terry is bummed and wants to thank everyone— volunteers, vets and riders and their horses— for being hopeful we could ride this one out. On the upside—- stay tuned for some awesome snow photos from Dave Honan! 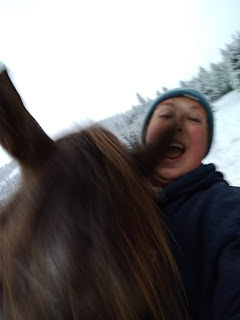 We were disappointed, how could you not be? But I absolutely understand the reasoning and I like that I was kept reasonably informed as well. As a group, we all decided to have a group photo. Cortney's husband Dave is the ride photographer and we grouped up at the base of the ski hill to get photos (to come!) 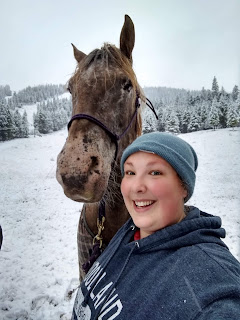 He also had us leave one by one so we could get individual photos set against the ski hill. I can't wait to see them! Dave is the one who took my maternity photos with Gwyn.

After pictures we had breakfast, and started packing up. But I wanted to ride. We promised ride managers we'd stick close to camp and wouldn't take any hills. Amira was in shoes and the snow was balling in her feet. 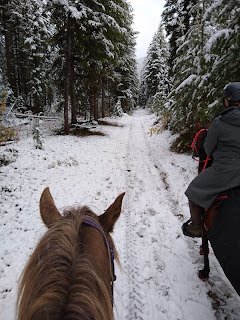 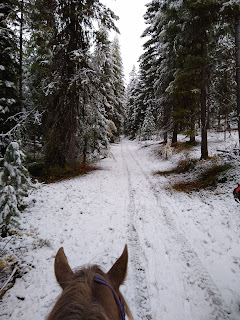 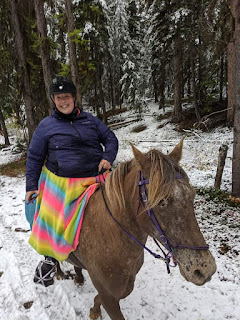 Both horses were confused. They knew they'd vetted in. But they also had been watching horses get packed up, loaded and driven away so things were 'done'. 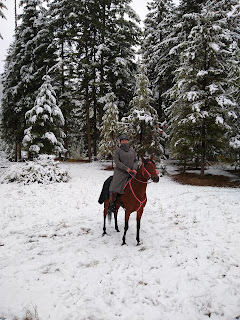 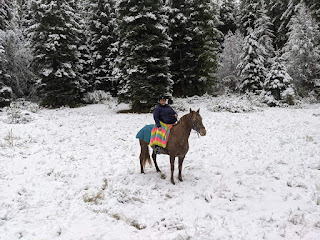 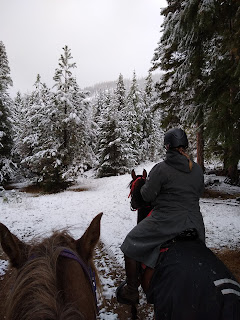 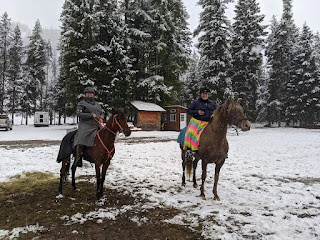 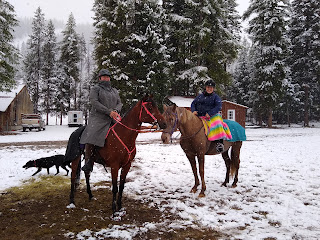 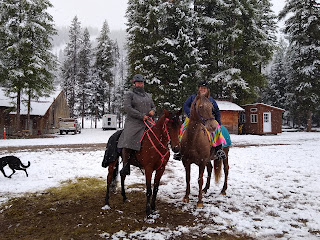 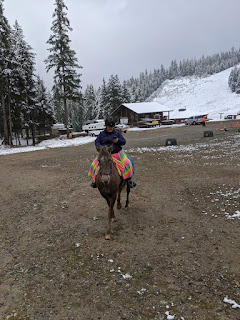 We rode 1.6 miles in a winter wonderland. It was perfect.
This was a leave no trace campsite and we had the option to pull our horse waste into piles and leave a donation for the Okanogan 4H group to come in and clean up. I left double the amount. It was still snowing as we left...

I followed Cortney down the mountain and we stopped at a fruit stand near Chelan (FRESH picked honeycrisp apples!)  Then I continued on Hwy 2, while Cortney continued south to i-90.  We were worried about the pass I'd be taking as it was higher elevation, but the roads were clear by the time I hit the pass (1:30pm ish) 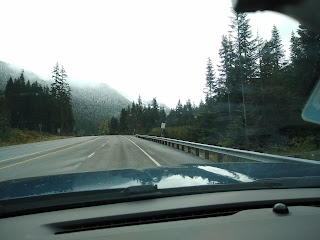 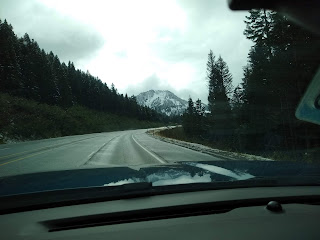 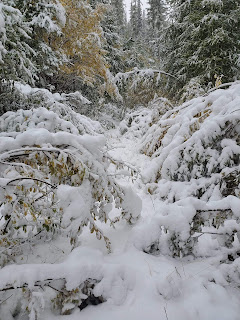 Ride managers posted these pictures of the trail as they tried to retrieve more water stations. They made the right call. 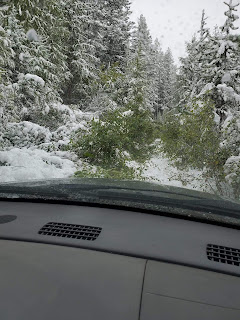 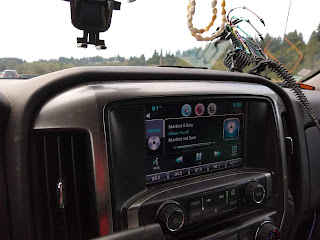 And then back in Monroe, it was blue skies and 60s F. So far from what I woke up to! 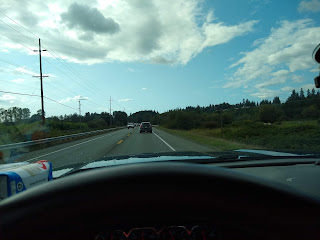