Picture, if you will, a decade younger me. It was 2008. I was living in Florida, recently married, just out of grad school, looking for a job, and spending time with my friend Cheri.

She had four horses, Stella, Blanche, Gwyn and Nyx at her house. We had met through the equestrian group on Livejournal (remember that?) and hit it off immediately. Her husband was a NASA engineer, mine was a NASA engineer. We were both flighty, horse obsessed and despite the fact that she is literally old enough to be my mother (her daughter and I are the same age) we were best friends and still are to this day. We had a standing TV and dinner night together at their house every week to watch House and Lie to Me and we played Dungeons and Dragons on the weekends. She and I would ride together at night because that's when it wasn't ridiculously hot and we lived for the full moon nights to ride through the lovely scented orange groves. I would ride Stella and she would ride Blanche, and eventually we'd pony the babies (Gwyn and Nyx) during the rides too.

Below  this cut is lots of medical talk, euthanasia and very very graphic images

I don't want anyone to be taken by surprise.

Until Tropical Storm Fay in August. Which we rode in, because we wanted to. Blanche and Stella were mad. But the hurricane (lite) brought a ton of fresh growth to Florida because of all the rain and Stella ended up colicking. Because of the hurricane we couldn't get a vet out immediately or get friends with trailers to come pick Stella up to take her to the vet. We treated at home as long as possible before finally begging the friends to come pick her up. They had to seriously detour around the flooding and then we had to detour again to head up to the equine hospital in Ocala. Stella had colic surgery but the prognosis wasn't good and Cheri made the decision to euthanize before she woke up. It was a rough time. There were a ton of colics right around the same time though. The vets said hurricanes tend to do this.


It's also why I am paranoid about being without my own truck and trailer as a horse owner. 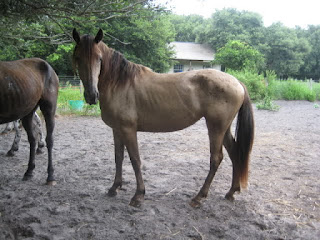 Not long after, a very young Gwyn scratched her eye on a post. The vet came out again and was skeptical of her recovery but left us with all the stuff we needed to treat the eye. As I was done with grad school and not yet employed, I worked in shifts with Cheri to treat Gwyn's eye at first, every 15 minutes, then 30 minutes, then hour, then every couple of hours. She still has her eye, but I'm pretty sure it's got limited sight.

In the course of treating the eye, Cheri had made a redneck version of a super expensive protective fly mask that the vets wanted her to have. She basically painted a small tupperware container blue to block out the light and sewed it into a fly mask to cup the eye. It worked REALLY well. Too well.

The mares had all had their shots but Gwyn really swelled up. Cheri at first thought it was a vaccine reaction. She couldn't open her mouth and had to be hose fed water just to stay hydrated. Cheri found puncture wounds on the bottom of Gwyn's face, between her cheeks and chin. It seems she was nabbed by a snake. The vet theorized it was a pygmy rattler. A couple days later, the swelling burst and Gwyn's face started necrotizing.


Hit hard by the colic surgery and euthanasia, Cheri couldn't send Gwyn to the hospital for the round the clock care she needed, so she and I stepped up to do all the bandage dressing and cleaning of her face. I took photos to document the healing progression of her face. If you are at all a redditor, you might recognize these pictures. I posted it a while back to r/wtf and made the front page. If you were one of my livejournal friends or from lj equestrian, you'll also recognize this.

My imgur album with these photos has nearly 10 million views, to give you an idea of how far reaching it was. 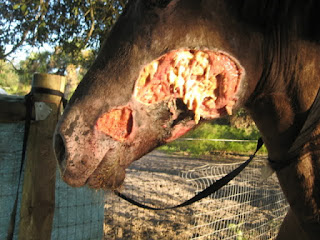 Come to think of it, this is probably why she adapted immediately to camping. She basically had to live in a tiny temporary pen for over a month. A weekend is no big, plus she gets to have fun. She also had to wear a collar this whole time, so that won't be an issue for camping on the high line. 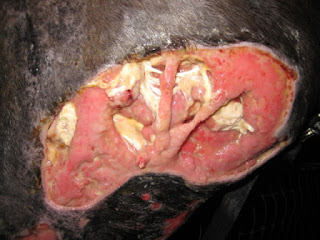 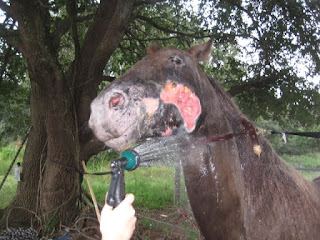 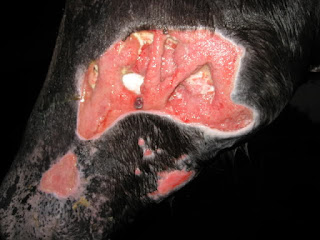 Her eye was being flushed with serum that the vet had drawn. She also had antibiotics for her eye. We had pain meds to dope the horse to treat her though eventually we just gave up on that and scrubbed her without, she seemed to enjoy it. Through this whole debacle we were still treating the eye and had some comorbidity as the treatments for her face irritated her eye and set the healing back. We had to modify things quite a bit on the fly.

Through this whole thing she never stopped being in your pocket and would be very happy to see us come out for her treatments. 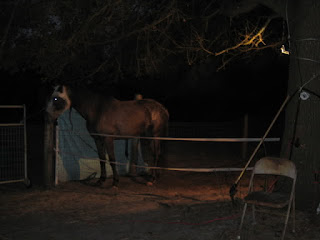 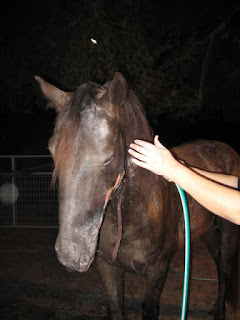 As we cleaned it, we pressed down from her ears to her lower jaw to force the pus that was higher up in her face, down and out. We wanted the wound to drain and not form pockets of infection. 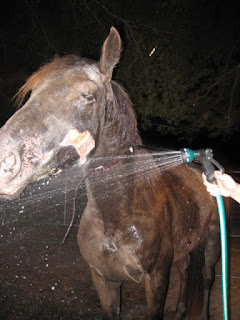 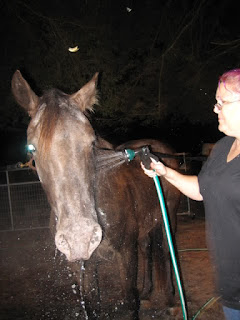 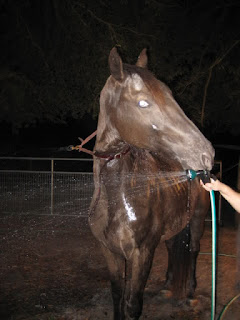 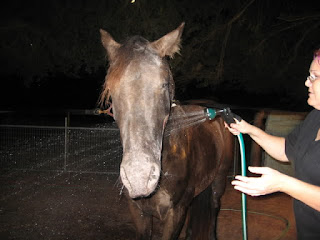 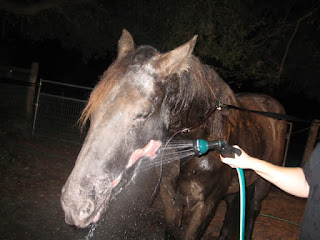 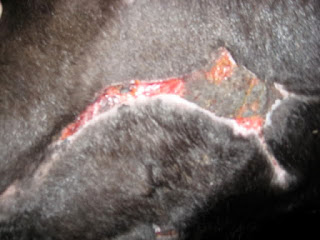 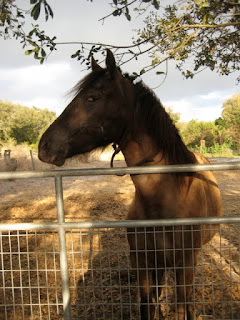 The scar is practically invisible unless pointed out. She does have a loss of muscle tone on the left side of her face but it does not impact the use of a bridle or bit. She can see out of her eye, though the range of sight is unknown. She can eat with no issue. The left side of her nose droops slightly from a bit of nerve damage, but that is all. Her lower eye lid has no muscle tone and I supplement her natural tears with eye drops as she has constant red eye.