I'm just going to break this up into parts because geez there's a lot to talk about! 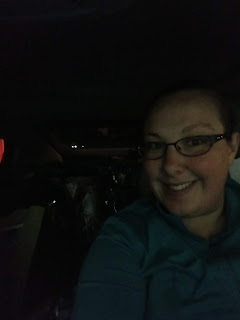 I left in the early hours of the 11th, 5am.  It was ideal. I managed to avoid the commute traffic through Detroit and everything else timed to avoid commuters through the rest of the day whenever I hit a city. Perfect! I took the Volt, which is a hatchback sedan and hybrid electric vehicle. I didn't have to stop much for gas plus it's a cheap car to fill up, $20 for 300+ miles at current prices. 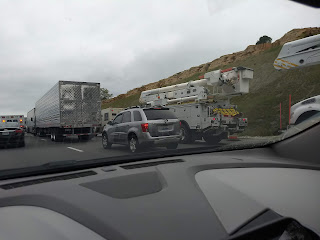 There were LOTS of utility trucks heading south with me, as well as portable solar panels and generators. Hurricane Florence was en route and I was heading straight for it! Wheee! 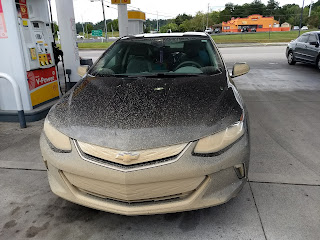 My car was sporting the early morning reroute onto wet dirt roads near home. It still has that dirt on the sides and back. The multiple rain storms it has gone through since did nothing to that sticky Michigan road dirt.

Also, I'd like to formally request that Tennessee put in scenic overlooks on I-75. It needs it! 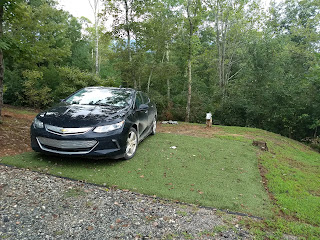 I arrived in Mill Spring, minutes from TIEC, at 5pm, 12 hours after I left. I was staying at the Silver Creek Campground in Mill Spring. I had reserved a rustic campsite. Well, rustic camping here is still a sight better than in Michigan. I had outlet power, y'all. 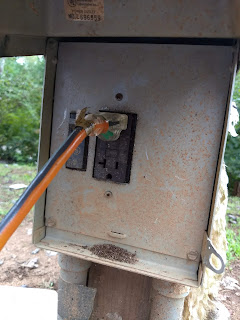 This meant that I could run my vehicle on electric the entire time I was there. The total driving I was doing each day was no more than 30 miles. The car gets 58 miles of electric range. I was thrilled. I gassed up the car early and made sure it was always plugged in at night so if the hurricane made plans change I could bolt as far as possible immediately. 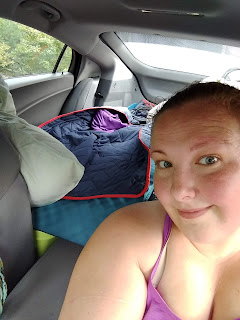 My sleeping plans were thusly:  In the car.

I moved my passenger front seat forward as far as possible and stuck a storage tote behind it. The back seats were laid down and I put down several layers of foam camping pads. I propped up the area on top of the tote so it was level with the seats that were laid down. Because the car is a hatchback, I had decent room and could stretch all the way out.

I also had my pop up canopy and my screened attachment that goes all the way around. I basically backed the volt under the canopy, zipped up the screen and left either the windows or the hatch open all night. Giant tent!  This worked except for the first night where it thunderstormed and I had the windows down, not the trunk open and rain basically came in the windows.

After setting all that up, I drove over to the volunteer command center to check in. They were all leaving to go to the opening ceremonies and I forgot that I was using my legal last name (it's hyphenated) and not the casual married name I usually just go by. So they couldn't find me and I couldn't get checked in that night. No biggie.

Instead I found a grocery store and picked up a few last minute items like ice and a styrofoam cooler and milk for my protein shakes. The mountains were gorgeous. It made me miss Washington something fierce. 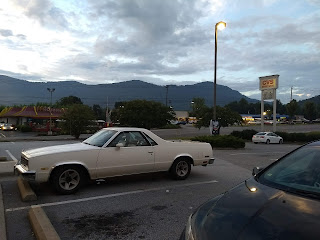 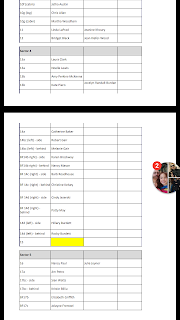 That night they sent out the jump assignments. I was in Sector 4, assigned to jump 13B! 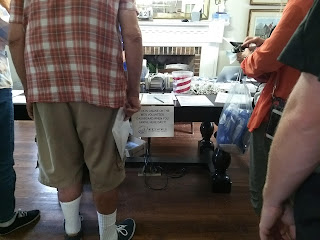 This was the crazy check in for cross country orientation. We got our shirts, hat, name badge and pin. The shirts were sponsored by Horseware Ireland, which kind of sucks because their largest size was not quite big enough for me. I could stuff myself in it, but I needed to wear a camisole layer underneath it to keep things modest every day. 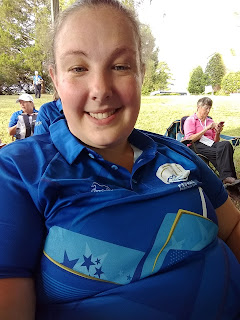 So we all gathered to meet the Technical Delegate and the assistant TD and then all of the Sector Stewards introduced themselves. My Steward was Nigel and he really reminded me of John Oliver when John Oliver gets old. He was great. Once we had broken off into our sector groups we all walked down from the volunteer staging to the cross country course. It was the first day the competitors could walk it but it wasn't yet open to the public.

So... full disclosure. I am SO bad at recognizing people. SO SO BAD. The only way I could figure out who someone might be was if I saw which country they were from, which was either by identifying the flag or by reading the country on the back of their shirt. Which was then too late to match names to faces or vice versa.

So if you know who someone is, please tell me and I'll edit this. Otherwise, it's all going nameless.

Someone else pointed out Marilyn Little walking the course, even though she wasn't competing. I saw her at fence 10, the A-G water. But it started to pour and I didn't get a picture. 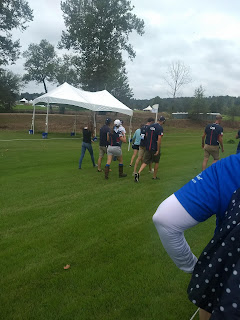 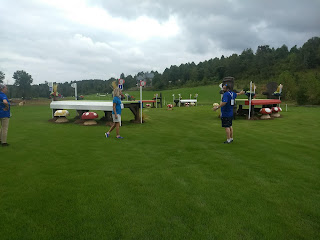 Fence 13AB was the mushroom (and later apples) with the giant chairs. The chairs were only on the direct route fences. The other set (white to white, no chairs) had a longer bending line and smaller fences. Only one rider opted for that set on the actual day. Every rider walked the Red to Red direct. One rider walked WhiteA to RedB. 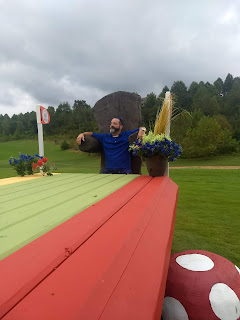 Fence judges get perks. We totally posed with the chairs. 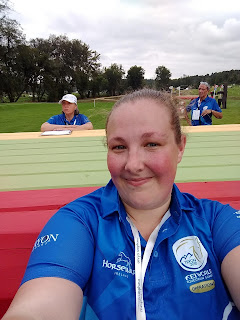 It's a GIANT FUCKING TABLE.  Jesus. 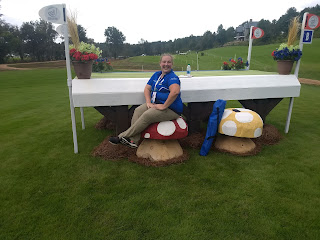 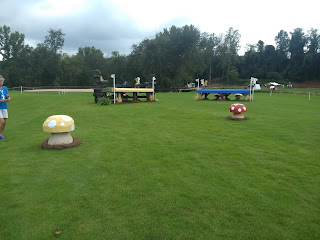 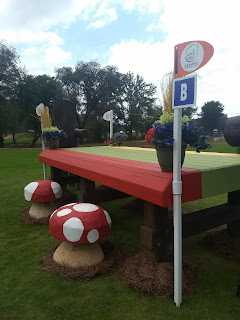 After we were done, we started to walk back to volunteer HQ only for the skies to open up on us and pour (the same pouring rain that created the humidity that FEI used as an excuse to cancel the endurance being run that day). I ran for the VIP tent and hung out with some of the team from Sweden and Spain.

I later sat next to one of the Spain team member's sisters, Cristina Pinedo Sendagorta. She was there with her baby boy, husband and Mom (I think) on the shuttle bus to the main venue. Her baby was so freakin' adorable and in amazing spirits given that we were all soaked from the rain. She is also an eventer and competed at WEG in 2014 but was sidelined due to injury. Her sister, who is competing, is Maria Pinedo Sendagorta. 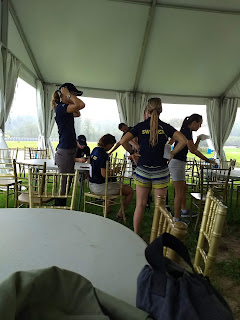 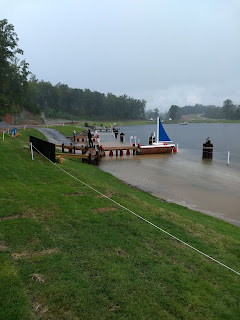 I got shuttled to TIEC and grabbed some food (ehhh, the food for volunteers was not well coordinated early in the week...) and watched some Grand Prix dressage. THAT was cool! 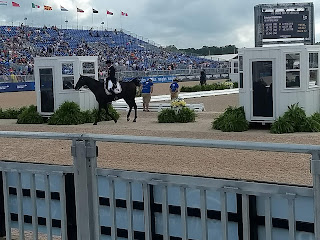 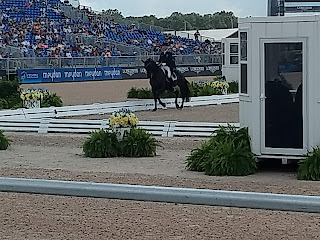 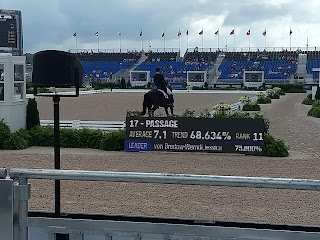 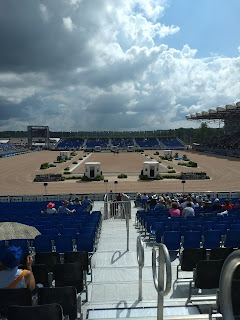 Then I discovered there was an amazing breeze if I sat at the top of the stands rather than at the bottom. 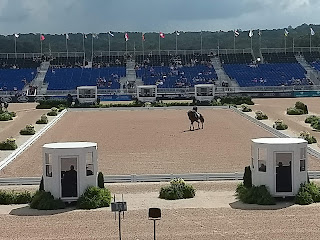 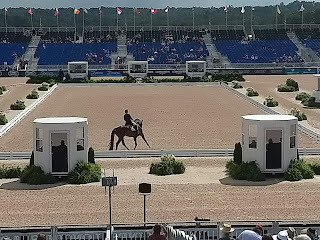 I hadn't brought the good camera though, so I didn't take many photos and left to wander the vendor area. 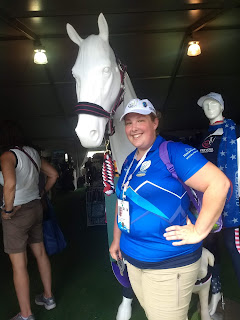 I do have either photo or video of every rider who made it to Fence 13. Is there interest in seeing that? Like 80 pictures of the same fence but different horses and riders? I have video of the bigger names that came through.

And then, for Sara for the volunteer hours, I'll probably leave this as a comment as well, but over 4 days I had 28 hours and 22 minutes of volunteering time. I can screen shot my times from the TIEC volunteer portal if you need.
Posted by Amy M at 8:18 PM