(Finally getting around to this draft)

BCHW: Back Country Horsemen of Washington

The BCHW put on a wine ride (most) every year. It hadn't been held in 2020 due to obvious reasons but with lockdowns easing slightly in October, the wineries were willing to have riders come back. The basic weekend is this:

Friday: Arrive. Park in a GIANT field  that's definitely not level, dinner fundraiser provided by management. Plastic non-stem wine cups with the logo provided for saddle bags. Enter the raffle if you want.

Saturday: Wine Ride!  Pick a long or short loop and ride from winery to winery. Decide which wine you want to try. If you're buying, provide your rider number. Your purchases get labeled with your rider number and delivered to camp for you to pick up that night.  Climb back onto your horse, ride to the next winery. Repeat until your horse rolls its eyes and carts you back to camp because despite taking your time, you get drunk or tipsy from all the wine.   Pick up your purchases at ride camp at dinner that night.  Maybe win raffle items.  Everyone drinks more.

Sunday: Pack up and try to strategize leaving when it's not busy with everyone else leaving too. 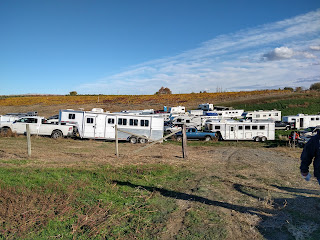 The friday I arrived was amazing. I pulled in the middle of my couples therapy appointment which I found amusing. There was decent cell coverage in camp since we were in the middle of touristy Zillah, WA. The town has decided to make wine tourism it's thing.

I was parked almost on the hill, but lucked out with a mostly flat parking spot to get set up. We had some lovely views of the surrounding countryside climbing up to the top of the hill. 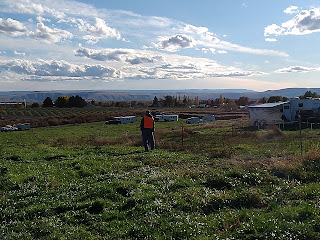 EDRA donated to the ride and asked all members to post something by their horse showing that we were endurance riders, both as a show of "likeminded groups supporting likeminded groups" and also to showcase that you don't have to have an arabian to do endurance.  Gwyn always gets a lot of attention. She very much enjoyed the grass in this field. I ended up removing the panels though as she figured out they didn't do much. Instead I strung up the high line and that worked far better. I won't have to worry about this in the future, my trailer now has a Hi-Tie arm. 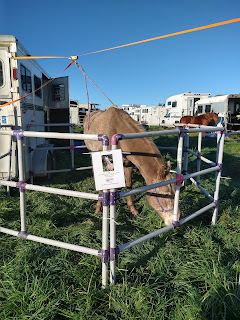 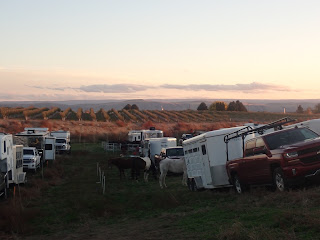 You can see not everyone lucked out with a flat spot. But also sunset was gorgeous. Vineyards in the distance. 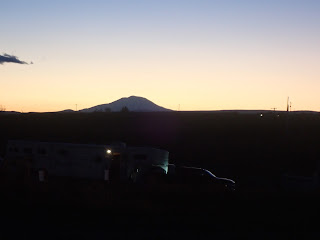 Mt. Adams was prominent on the horizon. 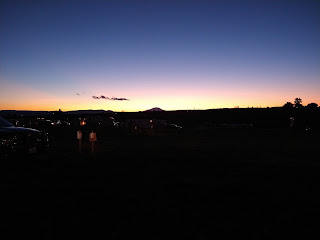 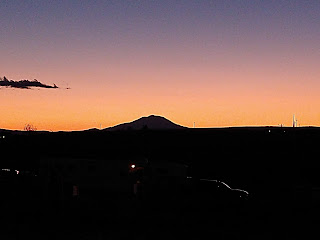 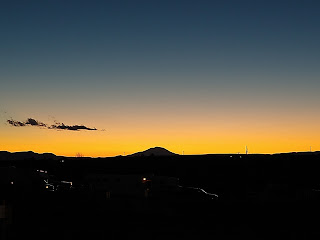 On Saturday we all got up and ate a hearty breakfast, forward thinking about the liquid calories that were incoming. Because this was halloween weekend, some people decided to dress up (myself included).  I went as the Grim Reaper, complete with Scythe. We had a large group that we were planning to ride with. 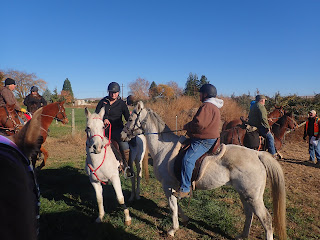 Ride management sent groups out in a staggered manner. We chose to take the longer loop, it also had the wineries that everyone wanted to visit. Cortney has a few favorites from having done the ride in years past. She marked which ones would be more likely to have the wines I would like (I've got a sweet tooth) 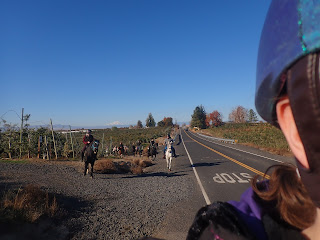 We did some road riding as well as some vineyard riding. Per USDA rules, we were only allowed to ride through the vineyards and orchards if harvest was complete or was several weeks away. There were signs posted about this and ride management was VERY FIRM. We were doing this by the grace of the wineries, so we better respect their rules. 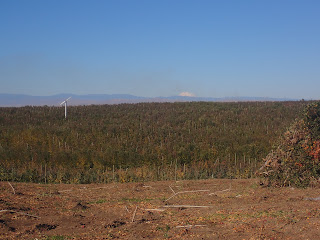 It ended up being both a cold and hot day. When the wind blew, it carries the chill of the snow. But the sun was SO WARM if you were out of the wind and in a sunny spot. Very strange day weather wise. 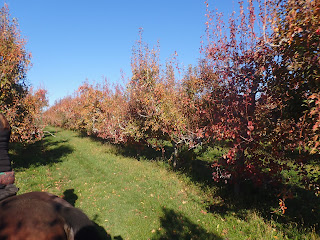 In some orchards. I can't remember if this was apple, cherry, or pear. 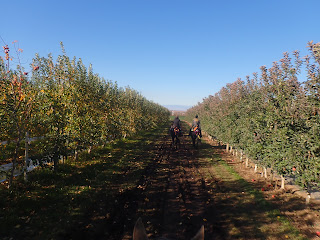 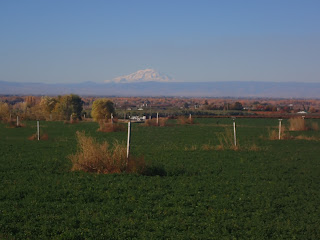 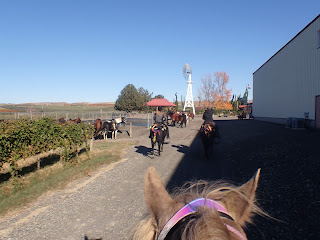 Coming into the first winery. The BCHW has put in hitching posts just for this ride at nearly every winery we visited. I believe the wineries are open to people riding in for tastings year round, you would need to stick to the roads otherwise. 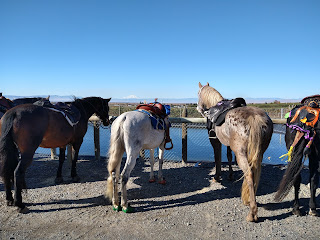 Gwyn took to hitching post time like a charm and seemed to enjoy the breaks. We would ride 1-2 miles, then she'd get a break. Here it really felt like she was enjoying the view. 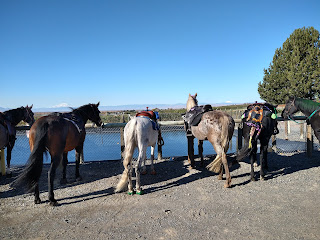 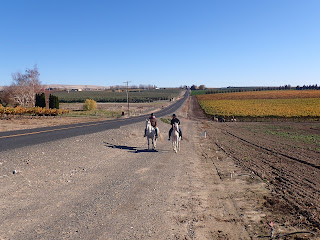 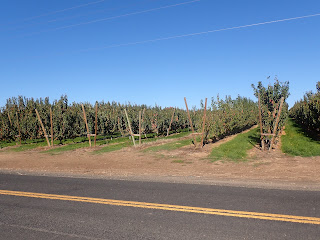 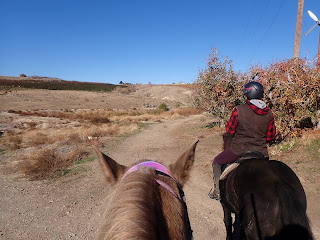 You can tell that the greenery in this area is only because of irrigation. Otherwise the landscape was brown and dry. 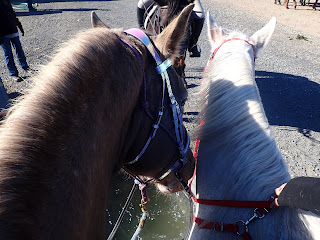 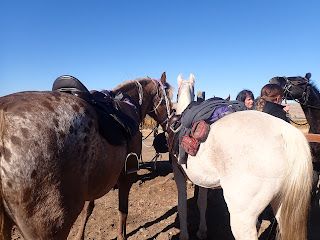 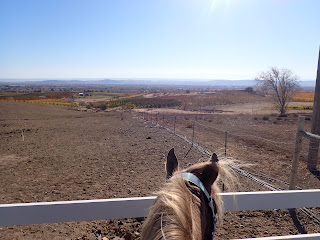 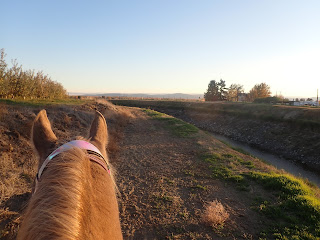 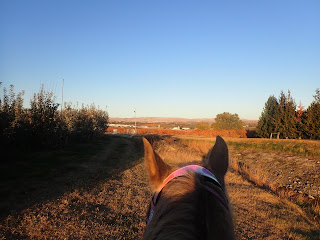 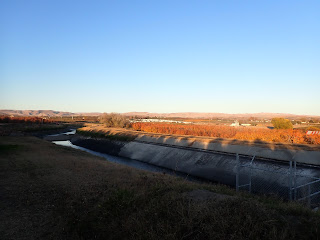 You can see ride camp in the distance and the hundreds of horse trailers, many of which had multiple horses and riders per rig. It was a MASSIVE undertaking! 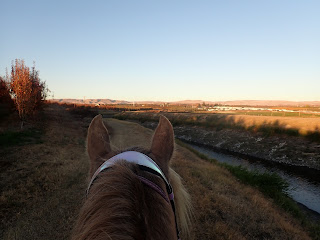 I did purchase some wine and I'm at least grateful I now know what to call the stuff I like. I picked it up after dinner and carefully loaded it into the truck. The temperatures that night were going to drop significantly, more so than the previous night. Trudy loaned me her propane space heater and now I'm contemplating getting one of my own. It was almost luxurious to have. Gwyn got her back on track for the night. 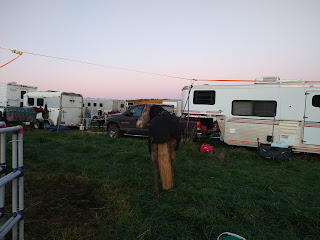 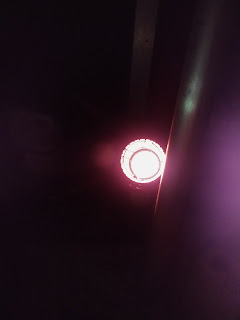 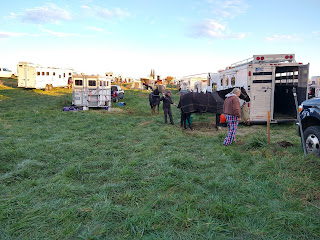 The next morning was clear and cold and it was time to pack up. I didn't delay, but I also didn't hurry. I didn't have to wait in too long of a line to get out of the field and most people had left earlier so my path to get out was relatively clear. It worked out well. Then it was heading home time so I could take my kids trick or treating that night!
Posted by Amy M at 7:41 PM

Email ThisBlogThis!Share to TwitterShare to FacebookShare to Pinterest
Labels: back country horsemen of washington, BCHW, Gwyn, pic-spam, The Goober Pony, The Wine Ride