Cortney messaged me asking if I'd be down for being on her team for the Woodbrook Hunter Pace. Her buddy was falling through and she wanted to go. Since this was shortly after Erica' s (routine) surgery, I needed kid minding. Thankfully, Cortney's Mom is aching for grandkids and was more than happy to accomodate. She was the first non-family member to ever babysit Kaylee, so I trusted her quite a bit. What proceeded was the most roundabout, long day to get to a horse event, but it was worth it. 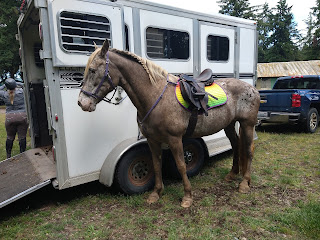 1. Get kids up. Get truck and trailer hitched. Pack up kids.
2. Drive to the barn, pick up Gwyn, hope that the kids don't' get distracted. Make them all go to the bathroom.
3. Drive to Cortney's mom's house. Drop children off. Meet Cortney there. Load up Reign and Cortney.
4. Say goodbye to children, who don't care because there is an epic dollhouse to end all dollhouses and they are enthralled.
5. Drive all the way to the major army base, where the hunt pace will be held.

Yes. That's right. This was on Joint Base Lewis McChord, just south of Tacoma. 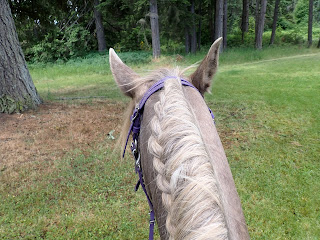 There was also a Hunter Derby on the same farm grounds. The whole area was a merged area of multiple barns that all backed onto base property with a spiderweb network of trails. Apparently you can get permits to just trail ride on JBLM property. 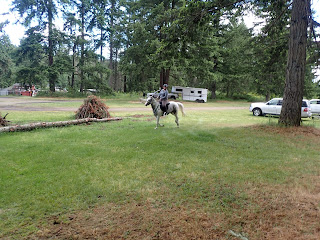 We had opted for the Hunter Pace, which Cortney informed me would be around 5 miles. I figured that would be a good test to see how I could deal with my leg after the endurance ride and altering my position in my dressage lesson. We warmed up over a fallen tree that had been trimmed  of branches, making it a lovely successively harder log jump. You picked the end you wanted to jump. 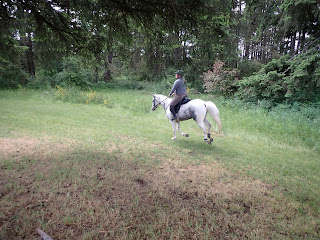 Reign was VERY excited about jumping. Gwyn was just happy to be out. She was excited, but not with the baby horse energy that Reign has. Gwyn was the babysitter on this trip and was going to be lead horse and teach Reign that you can go over fences in the woods without bucking. 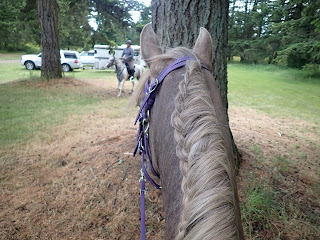 We got there with plenty of time to tack up and warm up. Then we were off, trotting nicely through well brush hogged paths amid passing sun showers. It was weird, but lovely, weather. 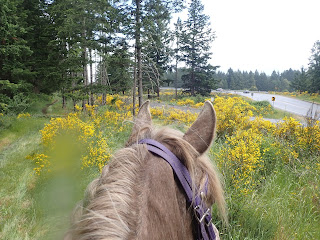 Gwyn and I opted for most but not all of the jumps. I was still unsure of how my leg would hold up, and trying to post out of my knee and not my foot was definitely making me feel it in my core. 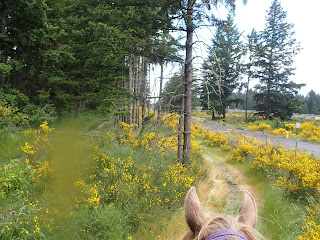 Most of all, I wanted jumping to be positive for both of us. All of the jumps had an option to get around without jumping so it worked out well!
We were honestly moving pretty quickly, I didn't take a lot of media on the actual ride. At one point we were in an open meadow, searching for the path (it wasn't as well marked as we'd hoped) and Cortney made the comment that we were close to the beginning but we hadn't nearly gone far enough we felt.

Nope. The course was 3.5 ish miles. We finished in 33 minutes. It was almost... anticlimactic. 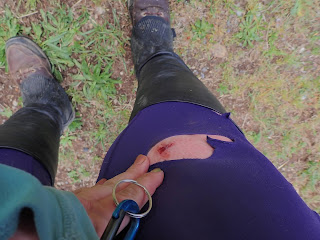 I did have a run in with a tree, as did Cortney. Most of my riding injuries that result in blood being drawn also involve trees.   Gwyn and I had landed after quite a nice jump. Reign was off to the side and Gwyn just...wanted to go to her. I tried to keep her straight, and unfortunately the average vector of travel resulted in me nearly getting impaled by a low tree branch. Ruined a pair of icefils to boot and now I have a gnarly bruise. 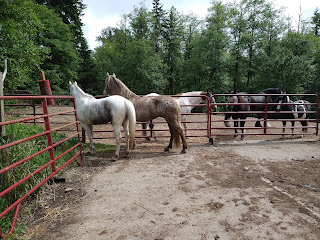 We hung around to cheer on a couple rounds in one of the hunter classes because teaching ponies to stand quietly ring side is a good skill too, then packed up and headed back to Cortney's Mom's house.  We unloaded the horses and let them loose (closing the gates to the property too, obviously).
Gwyn and Reign said hello to the geldings while Gwyn looked bewildered at being loose. 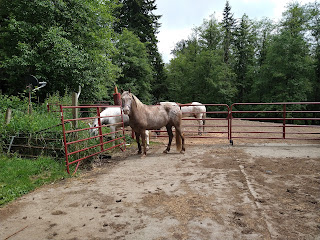 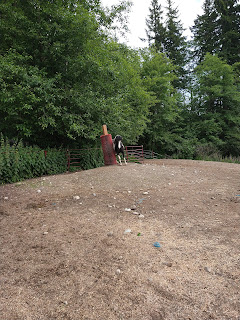 We had dinner there (everyone but my kids are vaccinated) and then loaded up to go home. At this point I was starting to feel a major migraine starting and I desperately took some ibuprofen as I contemplated the drive back to the barn and then home.
Kaylee begged to be dropped off at home before I brought Gwyn home (technically on the way...) and I reluctantly agreed while simultaneously wanting to claw my eyes out. Both kids were exhausted and I was in pain and seriously considering just tossing Gwyn in my backyard and dealing with her in the morning since I had some grain and hay I could give her. 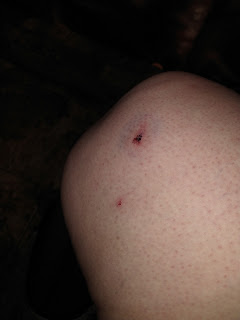 Instead I dropped Kaylee off as promised and gritted my teeth at Hazel's insistence she wanted to bring Gwyn to the barn and 'help' and continued to the barn. We were treated with a lovely rainbow as the setting sun found a way to shine through the rain clouds and light up the eastern sky.
Heading back home was torturous. Thankfully Hazel was exhausted and thus, quiet. I parked the horse trailer, didn't bother unhitching and tried to collapse into bed, only to find myself vomiting up all the dinner I'd eaten, and the high value pain med I'd recently taken. Only then could I fall asleep. 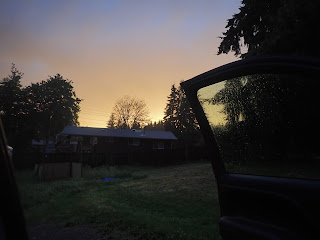 It was a long day. It was painful at the end. But it was fun. And I felt much better in the morning.
Posted by Amy M at 10:45 PM