Due to some comments from Jim that I don't understand, I'm annoyed but just sitting it out. In the meantime, trainer ED comes to the barn weekly and I can hop in on those lesson groupings when there's space. Last night I grabbed an 8pm slot. I love summer light because sunset isn't until after 9pm so we can ride in the outdoor.

Because of moving into our new house and getting it ready, I really haven't had time to do a lot of riding. Still, I thought it prudent to lunge Gwyn before hopping on just to make sure her head was in the game. Glad I did!
She made sure to give me her best Lippizaner impression and when we walked out of the indoor my barn owner made a joke about me signing a second liability waiver before hopping on. Her acrobatics on a lunge line are impressive, I'll grant her that (they could see hind feet above the indoor walls from outside... lol )  but usually once she farts about, I soften her back down and get her doing transitions within the gait and relaxing before I ever get on.
She'd just gotten bodywork done on Monday and I noticed that when she was on the wrong lead behind, she tried to change and then would buck. I'm finding this encouraging as it's improvement from when she would either bunny hop in the canter behind or just flat out stay incorrect. More on these thoughts.
Also, thanks to barn owner for taking these photos!
I hadn't ridden with ED since mid March, right before things super shut down (and I had a random fever that sent me into quarantine but was thankfully not Covid). She did remember us and remarked that we had improved from the last lesson. I had been implementing a lot of the tools she gave me since and I'm glad it's made a difference. 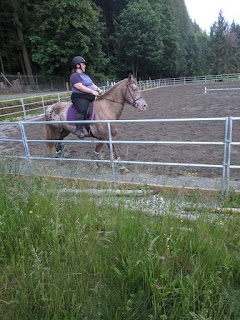 Right away, she noticed that I keep my left shoulder raised and this is impeding Gwyn's flexibility going to the left. She suggested that in my turns I rotate my whole upper torso and keep my hands pointing in the direction of my shoulders. With thigh pressure and slightly weighting my inside foot. This will help close my outside rein in the turn and give Gwyn guidance as to the curve that I want from her.

We had amazing corners and circles in this lesson. It's probably the first time that I haven't struggled with feeling like Gwyn was falling in at her shoulder, especially in the trot. I played around a lot with different size circles and seeing how well I could tighten the turn off my seat. I was hardly pulling her mouth and just sitting up and breathing tightened her into a turn on the haunches. I do need to remember to add a bit of outside leg to keep her butt tucked in, but she was so responsive I felt like we were dancing. Yaaassss dressage!
I showed ED a bit of Gwyn's canter under saddle and her big suggestion was that I really focus on cantering on the lunge line with side reins, specifically the sliding type (which I have) so that Gwyn can really focus on her balance without a rider but also not be locked into a head position. Our demonstrated canter was quite discombobulated and I think she was getting tired, but it's still something to work on and that could be worthwhile if I don't have a lot of time to spend fully tacking up but still want to make some forward progress during this crazy move month.

We ended with an exercise to get Gwyn really listening and relaxing. The goal was to trot the short and long sides, and walk in the corners. In the corners, really focus on the turn. I look too soon in my turns. I need to wait and look AT my turn. I'm looking too far ahead, which can be a product of worrying about a spooky horse, but Gwyn really isn't spooky. I can wait and take each movement on its own. I should trust her.

Once we were good with every corner and Gwyn having a soft trot and being responsive to the downward transition, we would skip a corner so it wasn't predictable. She was so good. And I felt like I had some good revelations and homework to practice on my own.  Gwyn got lots of cookies and face scratches once we were done.
I grabbed my trailer after the lesson and brought it to the rental. Horse trailers mean you don't have to rent U-Hauls. I managed to park it at the rental FIRST TRY backing it up into the extra parking spot where my truck was sitting.
I even got my truck tucked up nicely beside the trailer. We'll be ready on the weekend, rather than having to make an hour drive (30 min to the barn then back) to grab the trailer. It's just there, waiting for the large items! 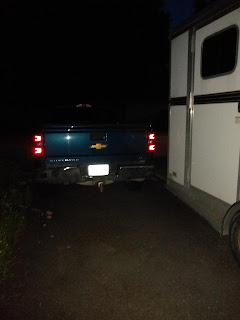