Prep for riding at home!

Our snow is nearly gone, except where the piles were largest or on the north sides of buildings and hills where the sun has yet to reach.

Sunday was finally decent enough weather that I spent hours outside tidying up, doing barn maintenance and prepping for better spring riding.

One thing I'm really proud of is my manure management this past winter. It's extremely hard for me to add in a new item to an already existing routine even if I know it would be beneficial or not take a long time. The curse of ADHD, honestly. But I committed this winter to doing at least some outside manure cleaning every night when I did the feeding. And boy has that paid off. 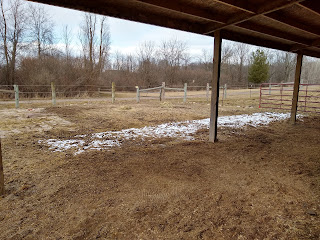 In the past the manure would slowly pile up outside the stalls (because my horses only pee in their stalls if given the choice) and freeze into giant poo piles that break muck forks. I'd have to wait until the weather significantly warmed before being able to remove it all and then it was a monumental, all day effort with many many people. I found that if I was starting with a clean slate of the runs, that the semi-frozen poo piles could still be lifted, and bonus, our restarting of the original manure pile near the runs meant that I could literally just fling it over the fence to be composted. This meant less dragging wheelbarrows through knee deep snow so less feeling like it was a monumental effort.  (Figuring out how to overcome effort barriers is key with my brain)

There was still a slight buildup of frozen poo, but overall the runs looked SO much better. And I made sure to get as much poo each night that I could, even if it meant scraping the tops off to expose the ice layer below so more would thaw. This has also meant that I will have an easier time of prepping this space to resurface, hopefully, this summer. It was pea gravel but between poor manure management on my part and Saffron needing a dust bath as she's apparently part chinchilla, it needs to be regraded and have rock put back down. Eric and I are looking into footing systems and we really like stuff like this for the dry lots or this for around the outside of the barn and our driveway. 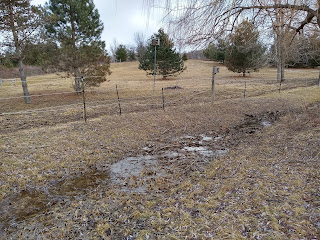 This is my donkey escape spot from last year. We had redneck run a fourth line of electrobraid in the giant gap at the bottom and it's been okay but this time we actually legit connected the fourth line with the copper bolts and got it officially onto the t-posts the way it out to be. The only thing left to is nail in an insulator on the one wooden post in the middle of the line and it'll be official! 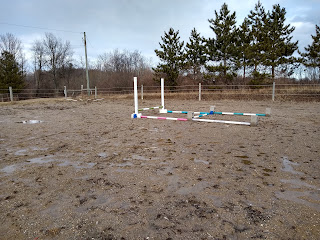 And then, since my arena is now super soupy which is better than concrete, I rearranged my poles and standards to allow for some better dressage schooling. I have a corner set of poles to trot plus the center thing. This gives me some more room to lunge and practice 20m circles while also allowing full use of the outer track for canter work, which we need to do desperately. Before, my step stool I use for mounting was frozen into the sand. That's now movable. Yaaaaay spring! 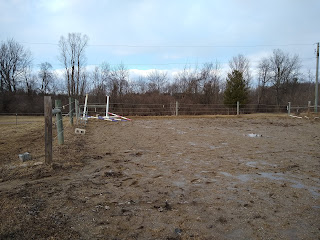 My new commitment for this year is to drag this thing at least monthly. I'm looking forward to riding in it, hopefully this week. The light is already better in the evening and I think I could start adding in quick rides after dinner and before kid bedtime.


Since I was deep cleaning, I brought the animals to the front pasture for some not nibbled to the ground grass and Saffron was beside herself in joy. I did have to fix feet divots that they made when the neighbor's 20 year old daughter sped down their driveway and spooked everyone. *grumble* The ground is both super soft in places and still frozen. It's a fun dichotomy /s. 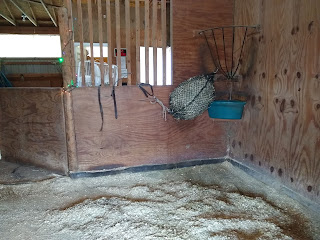 I'm constantly estimating and trying to predict how long my hay will last me. I bought a lot more than last year but I also think this winter was worse than last year and I tore through a lot of it with that deep freeze we had.  This should easily get me to May when I can start relying primarily on pasture while still leaving a few bales for camping trips. 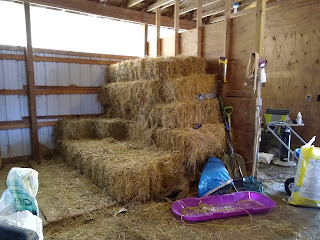 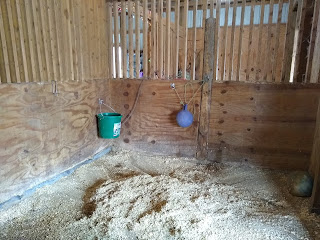