Snowy Saturday Rides or "How to Relax and Just Fucking Walk, Mare"

We got a decent snow yesterday to preface our dropping temperatures for what will be at least the rest of January into early February. So it's here to stay. Currently fluffy and light, which means it just puffs up into the gusts of wind that are a near constant at home and makes fascinating drifts.

I was determined to ride in the snow. My current arsenal of cold weather riding gear is complete barring upgrades. But everything is function and it did REALLY well at keeping me warm in low 20sF  (-6/7 C) while riding.

Eric offered to take pictures of me from the house and so I outfitted the DSLR with my zoom lens that unfortunately requires manual focusing. But I did warn him about that. So while these aren't super crisp clear pictures, they are better than what I usually have! And for being shot from the house, through a screen and dirty glass, they're not half bad!


I was originally planning to just warm up and see how she did and then go up to the fields to ride but then when we got to front pasture I realized just how 'up' she was. Tacking up, Gwyn was nice and relaxed, in fact I was anticipating her holding her breath for the girth but instead it was practically loose on her. I grabbed my mounting block and walked her to the front pasture after her dancing next to the barn was not instilling much confidence.

I unclipped the reins and let her bolt around the pasture while I shut the gate, just in case, so I wouldn't need to be running after a loose horse.

She took off and I was very glad to not be immediately on her. She wahoo'd around once and then stopped and calmly waited for me to come up and reclip the reins. Then mounting up was no big deal and we were off. She was very jiggy as as we ventured toward the road I saw a snow plow coming straight for us.

I sank my heels and sighed. I could feel her body tense as she focused on the very large, loud, snow throwing monster about to pass us.  It set the tone for the rest of the ride.

She proceeded to try and jig the whole time and basically took the liberty to spook with every pick up truck or larger that drove past. And we're in nearly rural Michigan. There are a lot of trucks.

I resolved to use the ride to just work on relaxation and moving her feet to keep her brain engaged. Then the neighbor started to plow his driveway with his giant blue tractor that would appear and reappear behind the pine trees. And Saffron started braying because I left her in the other pasture. The wind was cold and blowing up gusts of snow.

We had a lot working against us. 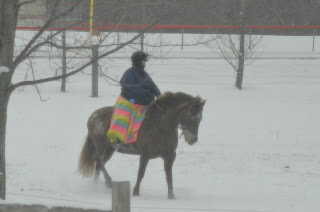 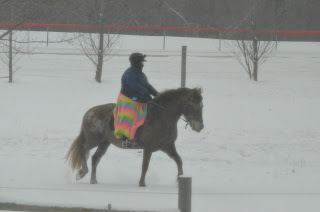 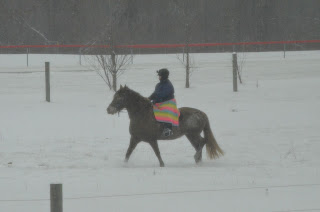 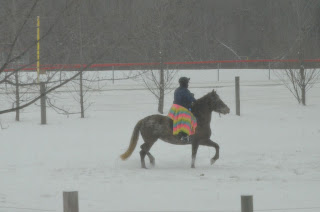 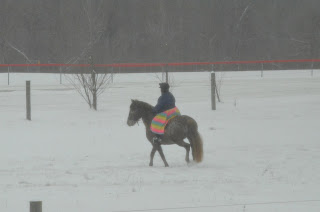 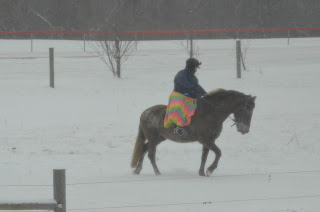 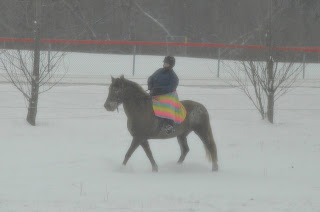 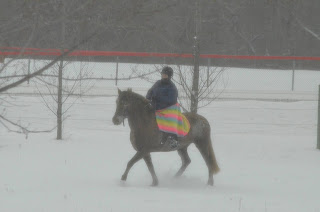 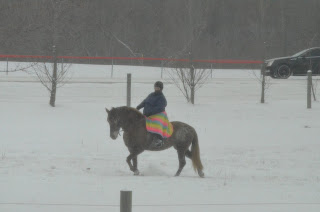 We had some arguments about turning in her hard direction, especially away from 'home' i.e. the barn and Saffron. But I just focused on being quiet, calm and firm. I talked a LOT this ride. And she listens to me when I do. She keeps flicking an ear back when I have running commentary. And I'd vocally praise and give her scritches every time she stretched down and released her breath. 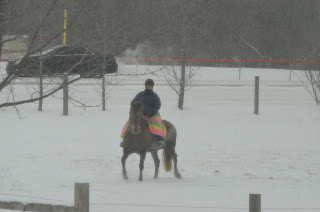 By the time I decided we were done, she was mostly relaxed, not quite loose rein relaxed, but she wasn't so giraffed and in my face. She was still not happy about the cars. But honestly, I kind of expected this to be an iffy thing. She probably felt good in the cold air. I'm overall pleased with how it went, despite all the shenanigans. We worked through it and ended better than we started and no one got hurt.

And now she'll get to go back and stuff her face with hay, since that's my answer to 'are my animals cold? GIVE THEM MORE HAY" 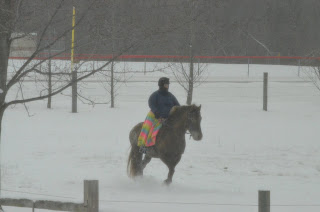 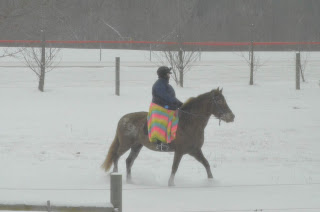 Best of all, I stayed warm the whole time. My ankle really liked my wide based endurance stirrups (It's still sore, I'm sure skiing all day Friday didn't help matters)