On October 8 the Metamora Hunt Club held their annual fall Hunt Pace. It was my birthday weekend (yesterday!) and I'd be damned if I was going to miss this. I loved the ride last year and since my summer has become one canceled horse event after another I was NOT letting this one slip through my fingers.

The weater the night before was dramatic with the town tornado siren sounding an alarm, but the day of the pace itself was beautiful. A cold front had moved in and while it wasn't exactly cold (WTH, October?!) it wasn't ridiculously hot and was, imo, perfect trail riding weather.

Gwyn was a sassy brat and took 30 minutes to load. This is my fault. We haven't done anything all summer except the one xcountry schooling and unless trailer loading stays fresh, or I pen in the trailer, she makes it hard. I'm kicking myself for that. I finally had to recruit Eric and with just his physical presence as rear pressure she walked right on and stood quietly eating hay while we locked everything up.

So that's something to work on. 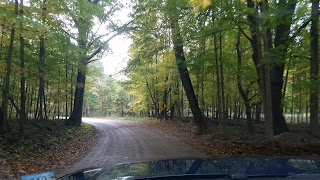 I live 15 minutes from the pace. Sooo close! 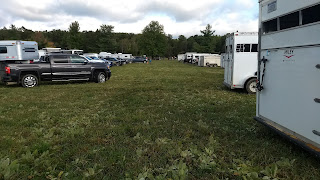 It was held in a new location this year, and the trailers were parked in a huge field that also apparently is part air strip. We did not park on the actual air strip part.  There were already a ton of trailers when I arrived (fastest time went out at 9 am, I got there at 9:30) and there were many more that arrived after I did! 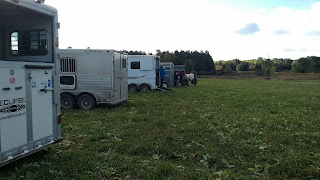 I managed to hook up with an endurance acquiantance who was coming with her sister and eventing friend. They didn't arrive until after 10 am so I left miss naughty pants on the trailer while I watched the goings on and filled out paperwork and gladly accepted some sherry. 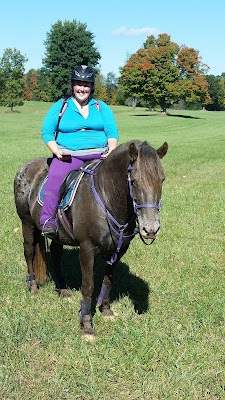 My coordination was pretty perfect today!  I have a new to me saddle pad in turquoise with brown and cream trim, two horse tack bridle and breastcollar, purple bootcut Pipers, purple boots on Gwyn and a teal Kerrits coolfil type shirt. It's long sleeve but mesh? So you're protected from UV but breezes keep you cool!

I'm torn on the Pipers though. They're the bootcut and were on super duper sale. The kneepatches are extra long so you don't have to use half chaps. I tried to use half chaps but my zipper wouldn't move on the pair I had on hand so I rode without. I didn't chafe at all, so the breeches did their job. The fabric is nice, but they were SO long on me! Traipsing after an escaping Gwyn during loading had the bottom halves just soaked from the morning dew. My socks were also totally wet since my ariats are old and  no longer waterproof. Thank goodness the socks themselves were wool, otherwise I'd have been in trouble. Anyway, the pipers feel heavy when you heft them. I think it's from the silicone on the knee patches. They're comfty and soft enough to lounge in, but I think for endurance the pants themselves are like unnecessary weight. And I don't need more, just look at me, LOL.

But, the gear worked for the ride. So that's what's important and Gwyn doesn't seem sore, so that's even better! 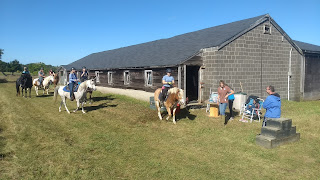 There were multiple sherry stops and one or two water stops along the ride. There was even an accordian player! 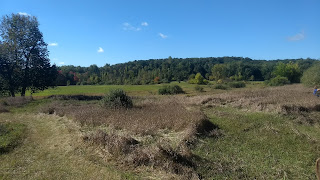 Not much by way of fall color. It's been too dry. 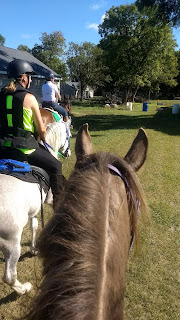 That's Shannon on the gray Arab. She's part of the endurance community and I've seen her frequently at rides. I had just seen her at Metropark Express where I decided to volunteer and we had friended one another on facebook, which is how I learned she was coming to this! 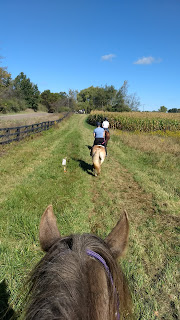 Shannon's friend Danielle is on the pony HalfieX. She's an eventer who trains with the lady that I had my cross country lesson with! Small world :D We first met at Metropark Express where she did her first LD on her eventer. 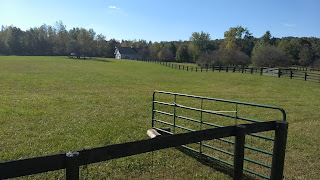 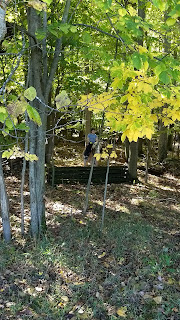 Danielle taking a second shot at this jump. The first attempt involved a collision with a tree and an unexpected exit from the saddle. 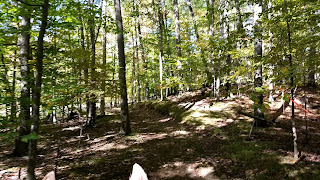 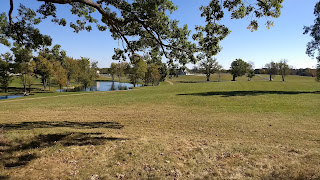 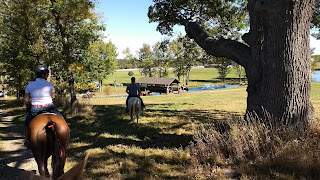 The bay with the red ribbon is Shannon's sister. She was a load of fun!

Then we had a covered bridge obstacle! All of the obstacles were optional and it didn't matter if you did or didn't do them. We did the bridge and Gwyn was very good. Unsure at first because it was big, clompy and hollow, but once she was all the way on she went across confidently. Good mare, making up for earlier. Honestly, our only spook was when we went by a dead deer and she jumped sideways. Who could blame her? The scent was awful to ME. 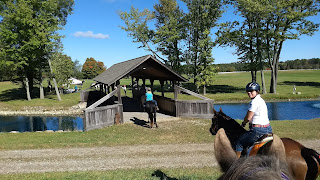 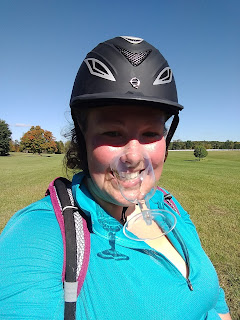 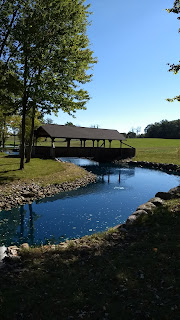 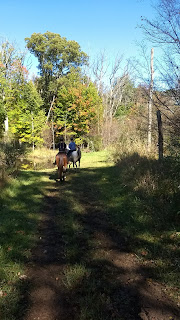 Water crossing, again optional, but the horses all enjoyed the wade through the water. 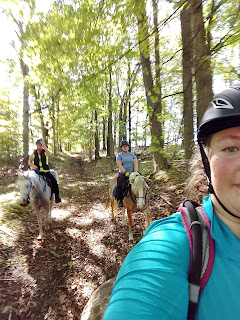 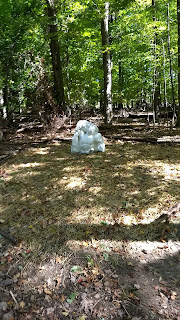 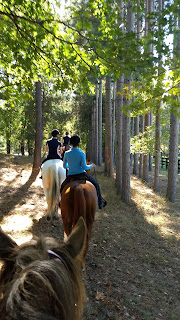 Nearly done! This group was decent. But we were caught behind some walkers for a while who just would not let us pass. It was very frustrating for our group. 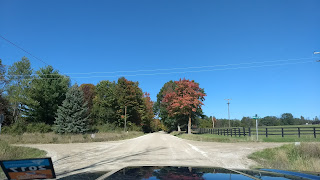 Some fall color on my way home. 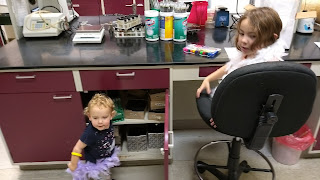 And then, as icing on the cake, I still had to run into work (it was a very busy day). I took the kids with me so Eric could have some time to himself. 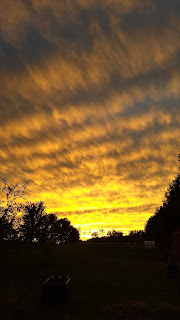 Sunset at our little farm. A great end to the day.

There should be 'pro' photos posted eventually. That will get its own post. Many people were smitten with Gwyn though she always gets called a 'he'...