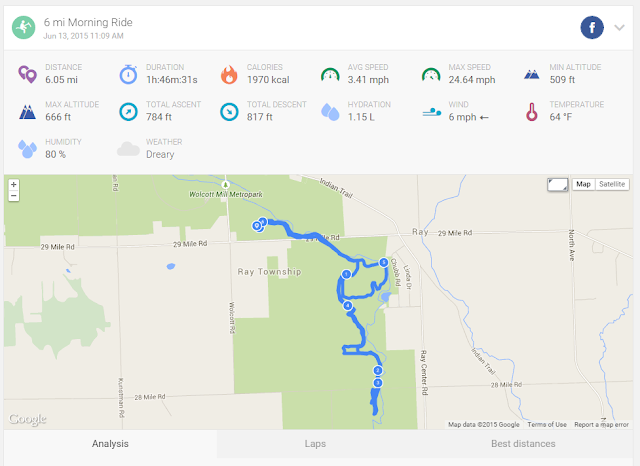 Today was a GREAT day. I got the barn bright and early to get my truck hitched and all my stuff loaded. A group of five of us from the barn were all planning to head to Wolcott Mill Metropark to ride on the horse trails there. We took two trailers including mine. It felt really good to be able to provide my own transport! And help someone else!

I had long ago gotten my bridle tag to ride there, which didn't cost anything. You just haul in, sign in at the book and go. Super simple.

This is where I totally go first world problems though.... these trails sucked compared to what I could do in Washington. It was mainly edge of farm field riding and minimal woods trail. What forest trail there was was a sogging muddy mess thanks to all the rain we've been having so we didn't even attempt to go through the forest areas. I would have been happy with woods. I can ride on the edge of a field at the barn :/

I will go back though, because for distance it's pretty good and once it does dry out, it would be an easy place to just trot/canter FOREVER and get some good conditioning for endurance in. No hills though, it's on the wrong side of Van Dyke. 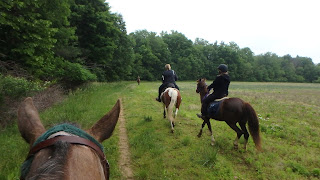 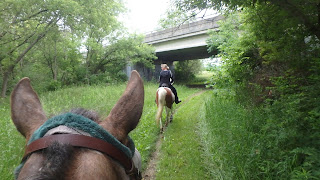 The trail from the staging area to get to all the loops goes under 29 mile road. Gwyn had no issues going through. I was really happy. 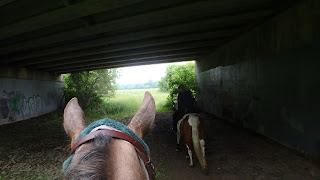 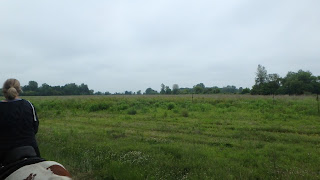 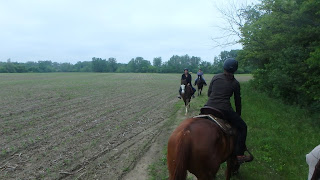 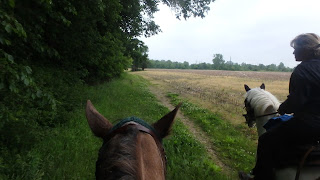 We trotted where the footing was good and made good time heading out. 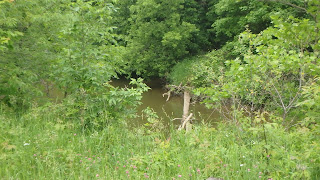 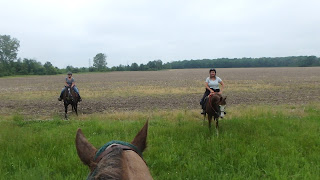 There was a grassy place to stop with a concrete mounting block. I think it's for pictures. We could see the river below us. Good grazing for the horses and a nice break. 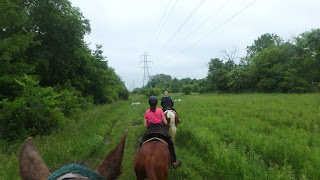 Then out and around and onto a powerline area with random paddle boat. 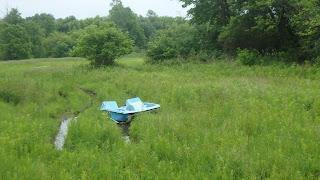 Maybe this place becomes a lake....??? It was crazy deep mud. I was not a fan but Gwyn handled it well. 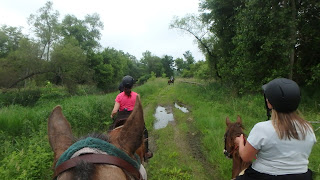 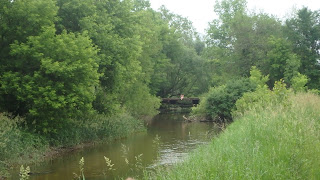 Bridge with kids on it. Private land on the other side of the river so no crossing. Plus no rails, made me antsy just thinking about going over.  I didn't get pictures but we turned around just after getting to the next field past the bridge. We'd caught up with a guy out by himself riding a thoroughbred. He cantered across the field, turned around and just BOOKED it galloping back. Ellen's eyes lit up (she was on the paint) "I want to do that!!!!!"

So I rode out with her to the far field and the guy came with us, we lined up and just FLEW back. I decided to trust Gwyn and just let her go. Oh my goodness, the rush was amazing. We hit 24.6 mph, breaking our previous known record of 19 mph. The guy's horse still was faster but my drafty put up a good effort. I ended up losing my jacket off the back of my saddle bags in the gallop so we went back to retrieve it then headed back. 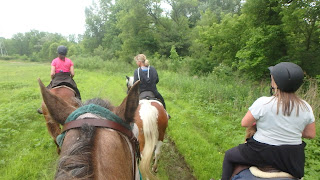 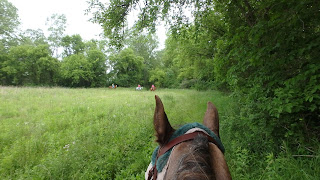 We crossed paths with these girls right by the river access. Technically horses aren't allowed in the river. 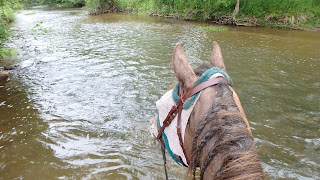 But we did it anyway. And then saw the girls watching and double back to do it too, lol. I was proud of Gwyn, she walked into the river with minimal issue. But she had major problems with all the puddles. 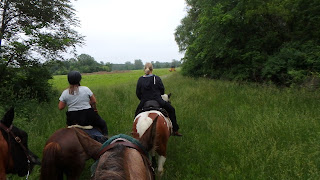 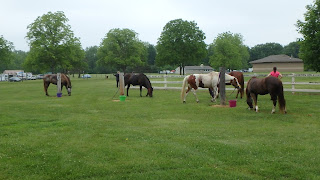 The original plan was to eat lunch and head back out for another ride before going home, but during lunch NO ONE EXCEPT ME TIED SAFELY.   Those horses were on a cross tie attached to their lead ropes. They were all over the place. Then they were just plain loose. THEN... one of the horses got too tangled in the long line and gave himself rope burn on the back of his pastern.  It was bad and his halter was nylon with no snap on the lead rope so SUPER UNSAFE. There was no way to quick release him and nothing to break under pressure. Poor guy. I felt bad not offering her a trailer tie to use initially because that's what I grabbed for Gwyn since it'd give way under that strain but... the horses could have also been tied to the trailers as well, and not those posts.

Thankfully because I'm keeping the majority of my stuff in my trailer tack room I had my full first aid kit so he got sprayed with wound spray and then slathered with Furazone. I also showed someone how to put on those professional's choice boots.

Since the poor rope burned guy was ouchy, we called it a day and loaded everyone back up. Gwyn was an idiot for loading, but not nearly as much as she's been in the past. We headed home and overall it was a good day! 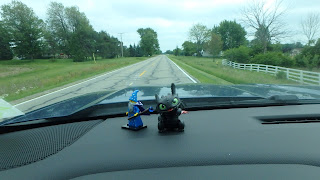