I was really excited to talk about this. Especially because I actually have AMAZING media thanks to a friend. But then I woke up to a fucking comment about weight on my IG where they grossly overestimated what I weigh. I just deleted it rather than engage, but fuck. Way to ruin a good mood. I was in such a positive headspace with constructive things that I could work on and improve.

So understand that I am sharing these in an absolutely wretched state of mind. I don't mind being picked apart for my equitation or form over fences. Those are things I can fucking change way more easily than my weight right now.  And I'm just... ugh. There's just a lot of self doubt and spiraling self hatred in my head about this. And there shouldn't be. There really fucking shouldn't be.

I board 5 minutes down the road from Polestar, a local eventing facility owned by Meika Decher. It's so close and I've never been there and I really should have by now. You can trailer in and flat on the cross country course for a small fee and by notifying Meika. She also has trails on the property. To use the cross country course you need an instructor. 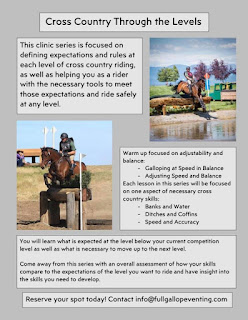 For this, I signed up for 2 days of a 3 part clinic with Marc Grandia, who has a training facility a town or two over. The 3 sessions were spread out over 3 months, so June, July and August. I couldn't do June thanks to moving houses, but I snagged a spot for July and August. 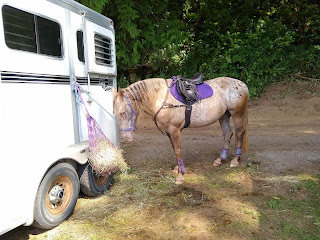 We were in small groups and trailer parking was basically at the start of the cross country field so there was very limited clustering of people. I operated solely out of my trailer and even had my camping toilet with me to minimize contact. It felt very safe.

I was in the third or fourth group of the day. In fact, I was arriving to grab Gwyn when the barn owner was returning from her clinic session with him. We started off with establishing a steady trot and canter in the field. Gwyn was AMPED up. She wanted to gallop. She knew it was something fun we were doing and was ready to just go hogwild. So our canter had some steering issues BUT I was able to implement the things I worked on in lessons to stop letting her blow through my right aids and for the most part was able to do broad left turns at the canter, lol. But if she got too strong in the beginning, I really only have control if I tightly turn her right. There's still work to be done. 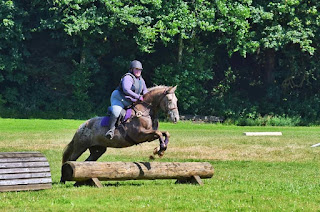 We started over a small log and BOY, suddenly the game was on! The focus to the first jump was staying straight and steady. Then we added in a couple more to string together a small course. 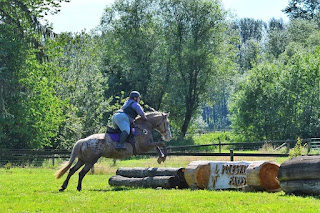 Because these were smaller jumps, and Gwyn was having some straightness issues, Marc had me focus on coming in in a nice trot and encouraging a forward canter on the other side. As Gwyn got a little tired (haha) and I got my sea legs back, so to speak, I built up the confidence to string some of the jumps together with cantering completely. 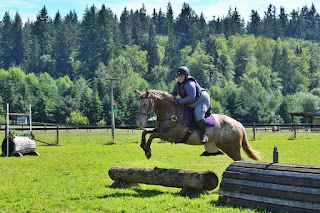 I have a weird mental hangup where I don't fully trust Gwyn to jump out of a canter yet. I'm not sure what's going on with that, but I do know that we just need to keep doing it so that I can outweigh the hesitation in my brain with good experience and examples. Maybe once I feel like I have more steering control? And that will only come with more cantering time in an open field. 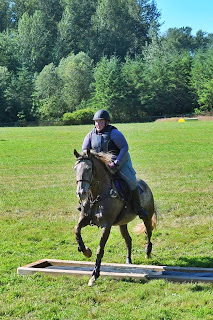 Once we'd finished stringing a few fences together and establishing steady pacing and straightness into and away from jumps, we added in the ditches and coffins. Specifically working with the natural elevation changes and maintaining good rhythm despite downhill or uphill striding. 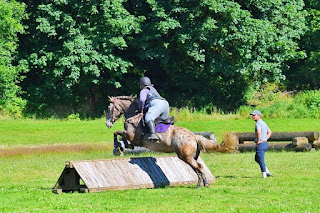 The baby ditches/coffins for my level were simple rectangles of landscape timbers with stapled landscape fabric on the bottom. There was no depth to ours to start, just the illusion of depth. Gwyn handled these fine. We had more troubles being straight to jumps than anything. I'm seeing my right size weakness magnified out on the cross country course, so I'm filing that away for things to work on at home. 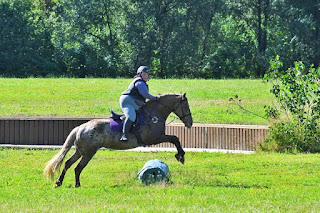 I'm also a little bit ahead of the motion. I'm not sinking into my heels enough which would help me fold more. So that's also something I'm working on at home on the flat. Lots of two point and really redeveloping a better base to jump out of in shorter stirrups. This did lead to two falls for more, though thankfully both were a roll and I was on my feet. None were head impacts and I definitely appreciated my vest. 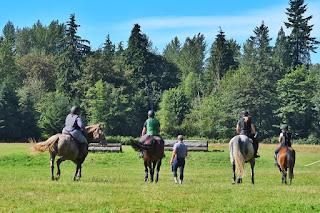 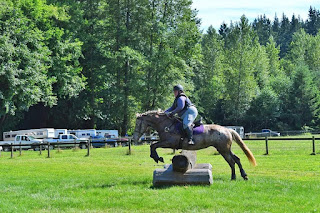 Despite the falls, it was such a great time. Blazing hot and I could feel Gwyn losing some power over the jumps as we moved from more starter level heights to true BN as she got tired. She still had power on the flat and was not content to just stand and wait our turn, so I'm crediting our endurance conditioning for that. She can trot for hours, but I know that her conditioning won't fully convert to jumping condition, especially in the heat. I rode conservatively and we didn't do everything everyone else did, which Marc was on board with. My legs were getting to be jelly anyway. 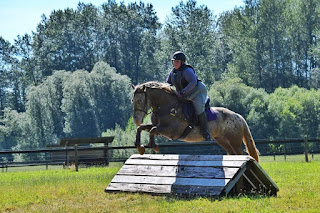 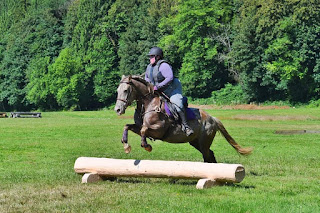 We ended on a really strong note, tying several fences together and cantering the course, far better than our start! And again, my confidence rose as the day progressed, even though we were both hot and tired. It was such an empowering clinic, I'm really excited for the August one, which will be on conditioning and pacing! 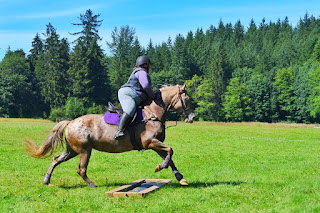 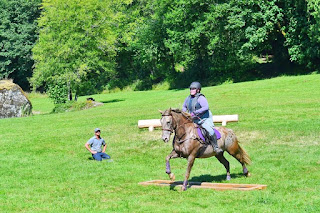 In the meantime, I intend to return to Polestar specifically to use their fields for cantering work. Gwyn feels better balanced in the open like this where our turns can be wide and sweeping, rather than tight and controlled in an arena. I would like to get to a point where we can canter around the perimeter of the field and that's going to require more stamina from me. 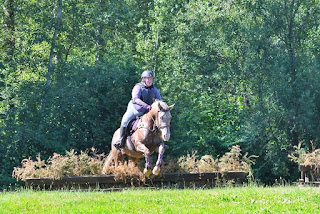 Really, this gave me more of a desire to push forward with my AEC goal in 2022. And these clinics are a good stepping stone on the way there.
Posted by Amy M at 12:56 PM